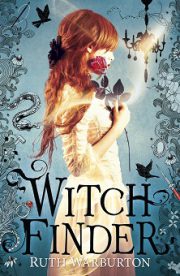 London. 1880. In the slums of Spitalfields apprentice blacksmith Luke is facing initiation into the Malleus Maleficorum, the fearsome brotherhood dedicated to hunting and killing witches.
Luke’s final test is to pick a name at random from the Book of Witches, a name he must track down and kill within a month, or face death himself. Luke knows that tonight will change his life forever. But when he picks out sixteen-year-old Rosa Greenwood, Luke has no idea that his task will be harder than he could ever imagine.

Luke lifted his head and sniffed the dusk. The rich smell of roast chestnuts pierced the cold foggy air, above the more familiar Spitalfields stink: horse manure, coal smoke, rubbish. Another day he might have searched his pockets for a farthing, bought a paper cone of hot, burst chestnuts and burnt his fingers as he ate. Not today. Not with his stomach churning like a wash tub and a fluttering sickness in his gut.

Instead he pushed past the scurrying children and sharp-faced errand boys, and stepped into the foetid, muck-strewn road.

At the Cock Tavern the gas-lamps were lit and the working girls called out to him, trying to catch his eye for the evening trade. Their cheap perfume wafted across the muddy street, cutting through the sharpness of the burning chestnut skins. He turned up his collar, readying himself to run the gauntlet.

‘Come on now, Luke Lexton!’ Miriam called as he drew near. ‘A man like you can’t be a monk all yer life. I’ve seen you with those horses, how’s about I teach you to ride something a bit more lively?’

‘Don’t listen to her!’ Phoebe twirled her skirts as he passed, flashing her crimson petticoat and stockings. ‘I’ll give you the first ride for free, Luke. For a birthday present, eh?’

‘My birthday’s been and gone yesterday,’ he muttered into his muffler. ‘And I’m late for me uncle.’

‘Come back with your uncle and all!’ Miriam cried. ‘William Lexton’s a fine figure of a man too!’

They were still giggling and making eyes over their fans as he rounded the corner.

It was full dark when he entered Fournier Street, the narrow brick houses rising high either side of him. Once these had been the homes of Huguenot silk-weavers, a fine prosperous quarter. Now the silk was woven in far-off India, but on a fine day you could sometimes see bright scraps still fluttering in the windows. Tonight every window was closed and dark, and the yellow-grey fog hung low, trickling between the buildings like a living, breathing thing. The single hissing street lamp barely pierced the gloom, but Luke still pulled his muffler high and his cap low, and he looked up and down the street before he knocked on the door of a shuttered house, three times slow, three fast, three slow.

‘Who’s there?’ The voice behind the wooden door was gruff.

‘A man looking for work.’ It was the first time Luke had spoken the words, but he’d learnt them by heart long ago. Now, as he said them, his voice low, he felt something tighten round his heart.

The door swung wide, a shaft of firelight piercing the fog.

‘Come in, young Luke, your uncle’s inside.’ John Leadingham the butcher stood back against the wall, holding the door as Luke squeezed into the narrow hall.

Inside the small parlour a knot of men were crowded around a smoky fire, their heads low and faces grim. They looked up as Luke entered, and then stood, welcoming him with claps on the back.

‘Are you ready then?’ His uncle, a tall broad man with a blacksmith’s scarred hands, took a grip on Luke’s shoulder, looking at him steadily.

Was he ready? He swallowed and nodded.

‘Not “uncle” after tonight, lad.’ Will Lexton gave him a smile. ‘After tonight we’re brothers.’

Not if I fail, Luke thought. But he knew what his uncle’s answer would be to that: You won’t fail.

‘To the Brotherhood!’ Benjamin West raised his tankard high, so that it gleamed in the firelight.

‘To the Brotherhood!’ William Lexton, John Leadingham and a dozen other voices joined in.

‘To the Brotherhood!’ Luke said. He had no glass to lift.

‘Are we all ’ere?’ John Leadingham looked round the circle of faces. There were murmurs as the men looked for missing faces, counted under their breath, then nodded. John gave a final, confirming nod and said, ‘Then let the meet begin. Men, put on your masks.’

There was a rustle all around the room as hands dug in pockets and hoods were slipped over heads, and within a few moments all the faces except Luke’s were covered with a black hood. Suddenly these were no longer men he’d known since childhood, friends of his uncle’s, market traders and bargemen and farriers and smiths, but strangers – strangers with hard eyes that glittered through the slits in their masks. They didn’t move, but somehow he had the feeling that they pressed in on him, leaning forward hungrily. He stood his ground, but it took all he had to stop himself from taking a step backwards, out of the circle of glittering eyes, running home through the familiar stinking streets of Spitalfields, back to the forge.

Then one man, gowned as well as masked, spoke. Luke thought it might be John Leadingham, but his voice was hard and harsh, not the hoarse friendly croak that called out the price of meat all day long from the blood-spattered stall in Smithfield market.

‘Luke Lexton, you’re come here to our meeting house, you’ve given the secret passwords and entered into our circle. What is your purpose here tonight?’

‘I wish to join the Brotherhood,’ Luke answered. His voice was very low, but he was relieved that it sounded firm to his ears.

‘I give you this last chance; you may go freely now with no hunt at your heels. Do you wish to leave, or join us, now and forever?’

Luke’s heart was pounding in his ears and he found his fists were clenched, his bitten nails ground into his palms.

‘Good,’ the man said, and his voice beneath the black mask held a smile. ‘Good man.’

He paused for a moment and Luke passed his tongue over dry lips, tasting salt sweat from the heat of the fire and the close-packed bodies in the room. Then the man carried on.

‘Three trials you must face, to join the Brotherhood. Three trials, and if you fail ’em you face death. D’you understand, Luke Lexton?’

‘Then let the trials begin,’ said the masked man, and there was a hushed murmur around the group, though Luke could not make out any words. He searched for his uncle, but he could not pick him out of the circle. William Lexton was a tall man – Luke was six foot and his uncle topped him by an inch – but in the flickering firelight the silhouettes seemed to wax and wane like shadows, growing taller against the wall and then dwindling back, until Luke could not have said which shape was which.

‘First, the trial by knife,’ said the man. He drew back his black robe and in his hand was a long knife with a wicked edge and a point that glinted in the firelight.

Luke swallowed. His uncle had told him nothing of what would happen tonight, saying only that it was not worth either of their skins to spill the secrets of the Brotherhood to an outsider. Luke would know the day after his eighteenth birthday and not a moment before. But something in his eyes had told Luke that his uncle feared for him and pitied him, and now he began to understand why. The knife must have been six, eight inches long, and as wicked and sharp as the tongue of a nagging woman.

Luke put out his hand. He let it hover over the hilt of the knife for a long moment, trying to summon up the courage to do what he knew he must. It was too late to turn back, too late to run now. As the man had said, there was no way out, except one.

Don’t be a bloody coward. The voice in his head was harsh with fear and fury. Don’t disgrace yourself. If you fail now . . .

His fingers closed over the hilt of the knife. It was warm from the fire and fitted into his palm.

‘This test is a test of obedience and purpose, Luke Lexton. By taking this test you show that if you are tasked with something you will do it, without question, without counting the cost to yourself. If you falter, if you lack purpose and resolve, we are all lost. Only by the strength of one can we all succeed. Understand?’

‘Yes,’ Luke said. His voice sounded strange and grim in his own ears. ‘Yes. I understand.’

‘Good. Put the knife to your belly.’

He felt sweat prickle across his face and spine and for a moment he didn’t believe what he’d heard. This couldn’t be right – they couldn’t mean him to stab himself, surely?

‘Put it to your belly,’ said the man, and there was a steel in his voice that made Luke realize his role was not to question, but to obey.

He shrugged off his coat and muffler, and then put the tip of the knife to the flesh of his belly, in the soft place beneath his ribs, where there was nothing to stop its slide but skin and muscle. He felt a sickness in his gut as the point bit and a tiny fleck of blood stained the whiteness of his shirt.

‘Now, stab yourself, Luke Lexton, and if you value your life and the Brotherhood, hold fast. Do you understand?’

‘I understand,’ Luke said. A kind of hopelessness rose up in him: the realization that the only choice before him was death or disgrace. He gripped the knife, feeling the hilt slip beneath his sweating palms, and he tightened his grip until his fingers hurt and the tendons on the back of his hand stood out, shadowed in the firelight.