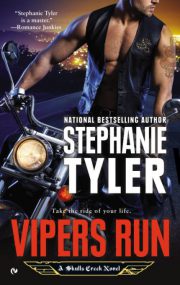 The Vipers Motorcycle Club has strict rules for their brotherhood and the women who enter it. Now one Viper is about to find out how much trouble one woman can be……
Former Army Ranger Christian Cage Owens joined the Vipers Motorcycle Club for its sense of brotherhood. In return, he pledged to live outside the law, protecting club members and their families, as well as keeping other MCs out of Skulls Creek. But when Cage discovers that a rival MC—one Cage has an all too familiar past with—plans to push meth into his town, he calls an old Army buddy turned private investigator who’s helped the Vipers in the past. By doing so, Cage endangers both his friend and Calla, a woman who works in the PI’s office. Now he’s made it his mission to track Calla down and do whatever it takes to protect her.
Thanks to the phone call with Cage, Calla knows she’s formed a deep connection to a dangerous man.  She quickly discovers that although he may live by a different set of rules, Cage is an honorable man who wants to be more than her protector—if only she can accept his dangerous lifestyle.  But Calla comes to Skulls Creek with her own set of secrets…secrets that threaten to tear her and Cage—and the Vipers MC—apart.  As they put their newfound love to the ultimate test, Cage will risk everything he cares about to save her……

And to his credit, my father never made me feel bad about it. For a while, I convinced myself that was because he didn’t care. But I’d been wrong about a lot of things.

“I’m sorry,” he said firmly, sounding pissed at himself. “I’ve been worried—I couldn’t get in touch with Bernie or you. Where are you? Your voice mail is full.”

I wanted to ask him what he knew, but I didn’t want him to worry. “I just needed to get away for a little while, to clear my head.”

It wasn’t that far from the truth.

“He was supposed to be finding out some information on your brother.”

“If I go to them, Ned says he’s got a friend who’ll pull the trigger. I paid, but he’ll be back.”

My stomach clenched. I stared across the room at the open window. “Don’t pay him again.”

“I’m a nobody—who’ll care about seeing me that way? I know it’ll be an embarrassment for you, so that’s why you’re doing it but—”

“Calla, you listen to me right now. I will never let those pictures come out. It has nothing to do with embarrassment. You’re my daughter and I won’t stand to see you hurt.”

I hung up before he could hear my sob. It was only one, and I forced it back quickly, putting my fist against my mouth. I shook my head, telling myself I had to cut it out and be strong. The way I’d always been.

I hadn’t told my father that I got those same pictures a couple of times a year at random times. Each time, it went long enough that I got comfortable, thinking that was the end. It was a taunt, a tease—a disgusting one, but I had no actual contact with Jeffrey Harris, whose family I’d gotten the settlement from. For all I knew, it was one of his friends who was there that night.

But it had been almost nine months since the last picture was sent to me. And suddenly my brother shows up with it? I wanted to think it was a coincidence, but there wasn’t a possibility I could accept that. I figured that somehow, someway Jeffrey and my brother were doing this together to get more money. To humiliate me. Because Ned never liked me much anyway. Especially after I had the police put out a warrant for his arrest because he’d withdrawn the money and signed the lease on the bar over to himself while my Grams was dying.

I assumed that my father hadn’t told Bernie everything that had happened to me. Even if Bernie was checking out my past in order to get a lead on Ned, there were some things money would’ve buried deep. I tried to recall if Bernie had treated me differently over the last month and could only see his kind smile in my mind’s eye.

Grams believed in patterns, believed that things followed us until we could resolve them. But this hadn’t been anything I’d wanted resolved. I wanted it to go away, disappear, bury itself in quicksand and cement, to dissolve as though it had never happened in the first place.

But that was far too much to ask the universe, apparently.

Apart from my family, I’d never gone as far as to hint at what happened to me. Telling Cage that small bit was a first. I’d never even given a statement to the police. My family had taken care of it, buried it. The problem was, burying it for myself wasn’t enough—it wasn’t working. I couldn’t push it down enough, couldn’t bury it deep enough down to where it stopped affecting me.

For six years after, I’d hung out with a group of privileged kids, very much like Jeffrey Harris, and I pretended I fit into their world, all the while wondering which one of them would see through me and do it again.

Therapy had helped. The rich all seemed to be in therapy. Like a badge of honor. Sex became meaningless, a way to make myself feel good and wanted and not dirty, a way to prove to myself that I could still have pleasure, that they didn’t steal that from me.

The truth was, it was important for me to prove all that to myself. But afterward, the emptiness, the spiral downward was almost too much trouble. For a while, I closed myself off from all men.

But I left all of that behind. The only man I could think about was Cage. And I couldn’t even talk to Tenn about him. All he knew was that I was scared and mourning someone . . . something.

I went to the room I’d been staying in, flopped on the bed and stared at the Army picture for the umpteenth time.

The way his head was turned made it impossible to see his face. Had he done that purposely? I traced the profile. Tenn was laughing—so whatever Cage was saying to him was funny. Cage had been funny, even in his distress.

But Cage hadn’t been in touch with Tenn, and I was trying so hard to believe Cage’s promise, but for me, cold, hard truths were easier to deal with. Typically, truths and promises were so far apart they weren’t even in the same universe.

Jeffrey Harris promised me things. At fifteen, I’d been naive enough to believe them. I believed it when my mom told me that I could fit in with the rich people at the boarding school—that I deserved that. I believed both Mom and Grams when they told me I was different. There was no more believing in promises that ripped my heart out . . . until Christian Cage Owens came along and did so.

Damn him. Because as several more weeks went by, the seeds of doubt snuck in, no matter how hard I shoved them aside. It brought up the biggest issue I had.

What was I going to do? Were the police looking for me? I didn’t think so. Bernie had left no information on me anywhere, had paid me in cash. Simply because of the nature of his business, he would make enemies. He hadn’t wanted me to get mixed up in anything.

“Bernie,” I whispered. He’d been so good to me and I hadn’t been able to help him, or anyone, including myself.

But all that had to change, starting now. Because although Tenn was entertaining—and honestly, so was the porn—I was getting antsy.

Most days, I’d join whoever was at the big breakfast table instead of coming down when no one was there. Tenn treated it like it wasn’t a big deal at all, and whatever guys were there at the time all followed suit. Tenn poured me juice, Eddie shared a plate of pancakes with me, I ate and listened to everyone talk and laugh about their night and the day’s shoots ahead.

It was good to be among the living.

One morning, Tenn hung around after the men split. We had more coffee, made small talk, and finally Tenn told me, “Sometimes, no news is good news.”

I wasn’t sure he believed that—not fully, because he seemed to be mourning Cage too. He was quiet a lot of the time, and Kev, the young guy I’d seen writing in the notebook, told me that Tenn was too quiet. That this wasn’t like him. Which made my heart even heavier.

Instead of retreading old ground, I said, “I need a job,” and when he paled, I quickly added, “Not one of yours.”

“Good, because that’s not happening.” He gave a smile. “I can show you how to work a camera.”

I opened my mouth but “no” didn’t come out. But really, filming gay porn—and really, many of the guys weren’t gay at all—wasn’t anyone’s life’s goal, was it? Even Tenn had a side business. “I’ve got to find myself.”

Tenn rolled his eyes. “I didn’t realize you were lost.”

“You specialize in that.”

He sobered and nodded in concession. “You hide it better than most. Or maybe you’re not as lost as you think you are.”

I waited for the lecture about the dangers, about how I had no money, no job or car, but it never came.

Instead, he checked his watch. “I don’t think we’ve hit forever yet, Calla. Not even close.”

My eyes opened sometime after four that morning. I woke restless as anything and I wasn’t sure why. I tried to read a little, but I couldn’t concentrate. I gave up, went to the bathroom, splashed some water on my face, brushed my teeth and figured I was up for good. Maybe I’d go watch some mindless infomercials or Bravo reruns of Real Housewives.

But as soon as I walked into the living room, my nerve endings tingled, like they were foretelling something of great importance. I looked around the now quiet first floor, a sense of impending change heightening my awareness, and I simply waited.

He stepped out of the shadows and I knew better than to be afraid. Not for my life at least—though I don’t know how I knew. I just did, with the same amount of certainty that I knew that the moon was still there, even if I couldn’t see it through the clouds.

His walk was silent, even along a hardwood floor that squeaked under the best conditions, and despite his heavy black motorcycle boots. Because I’d dragged my eyes down there first, certain that once he caught my gaze in his, I’d never escape.

I tracked up his legs, clad in faded jeans that were especially worn in the crotch area—deliciously so—and up his broad chest to his shoulders. He wore a black T-shirt stretched across his chest, along with a black leather vest with a snake patch on the front.