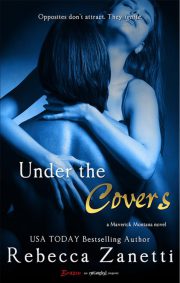 Opposites don’t attract. They ignite.
The small Montana town near the Kooskia reserve seemed like the perfect place for Juliet Montgomery to hide from her not-so-law-abiding family. But when her peace is shattered by a break-in and threatening phone calls, it’s clear someone back in New York knows where she is. It’s time to plan her getaway, and fast—but first, she needs to tie up a few loose ends. Namely, finding out exactly what the town’s sexy cowboy sheriff is hiding in his holster…
Sheriff Quinn Lodge has enough demons of his own to know when someone’s hiding something. Clearly, he needs to do a thorough investigation to uncover what’s beneath Juliet’s uptight, city-girl exterior—preferably one piece of clothing at a time. But when their chemistry goes from fizzy to full-on explosive, things start getting complicated. How can Juliet stay beneath the covers with Quinn, when doing so means blowing her cover?

This one is for Debbie English Smith, my younger sister, whose gift with horses would’ve made her fit right in with the Maverick Montana folks. We just returned from an awesome time in Vegas, and according to the Top Dollar machine, “You’re a Winner!”

Juliet tensed the second the outside door clanged shut. So much for her brief reprieve. She turned around and sat on the highest rung of the ladder, her gaze on the hard wooden floor so far below her feet. Paintings still hung on the wall, and she needed to take them down. But first, she had to face the sheriff.

She’d known he’d show up after receiving her e-mail. Nerves jumped in her belly as she waited.

He strode into the main room of the art gallery and brought the scents of male and pine with him. Stopping several feet away, he looked up. “Juliet.”

“Sheriff.” She took a deep breath, trying to keep her focus on his dark eyes.

But that body deserved a second glance. Tight and packed hard, the sheriff wore faded jeans, a dark button-downed shirt, and a gun at his hip. Black hair swept away from a bronze face with rugged features. Not handsome, but definitely masculine and somehow, tough. Years ago, she’d liked tough. Many years ago.

He cocked his head to the side and studied her.

For months, he’d been studying her…that dark gaze probing deep, warming her in places she tried to control. But Quinn Lodge was all about control, and the smirk he gave promised she’d be the one relinquishing it. “Any other woman, I’d be worried about that top rung. Not you, though,” he murmured.

She smiled to mask her instant arousal from his gravelly voice and resorted to using a polite tone. “You don’t care if I fall?”

“I care. But you won’t fall. You’re the most graceful person I’ve ever met. Ever even seen.” Admiration and something deeper glimmered in his eyes.

She swallowed. “Thank you. Now perhaps we should get to the arguing part of the evening.”

“I’m not going to argue.” Stubbornness lined his jaw, at home and natural along the firm length. “Neither are you.”

While the words sounded like a peaceful overture, in truth, they were nothing but an order. She clasped her hands together and smoothed down her long skirt. When he used that tone, her panties dampened. If the boys from the private school who’d dubbed her “frigid virgin” could only see her now. “Good, no arguing. We agree.”

His grin flashed a dimple in his left cheek, and he shifted his weight. “You’re not leaving the gallery.”

“Yes, I am.” She should not look. She absolutely would not look. But she’d recognized his move when he’s shifted his weight…yes. A very impressive bulge filled out the sheriff’s worn jeans.

She swallowed, her ears ringing. Her thighs suddenly ached to part.

Guilt flashed through her even as her eyes shot up. “Yes?”

His smile was devastating. “Would you like to finally discuss it?”

“Your erection?” The words slipped out before she could think. Oh God. She slapped a hand over her mouth.

He laughed, the sound male and free. “Here in the backcountry, ma’am, we prefer the term hard-on. But, yes, let’s discuss the fact that I’m permanently erect around you. Tell me you’re finally ready to do something about it.”

Her heart bashed into her rib cage. “Like what?” she choked.

“Well now”—he tucked his thumbs in his pockets, his gaze caressing up her legs to her rapidly sharpening nipples—“I’ve never taken a woman on a ladder before, but the thought does have some possibilities. How flexible are you, darlin’?”

The spit dried up in her mouth, while warmth flowed through the rest of her. He wasn’t joking. If she gave the word, he’d be on her. Shock filled her at how badly she wanted the sheriff on her. Most men would be at least a little embarrassed by the tented jeans. Not Quinn Lodge. He wanted to explore the idea.

“While I appreciate your offer, I’d prefer we returned to settling the issue of the gallery.” Could she sound any less like a spinster from the eighteen hundreds? “I’m unable to pay the rent, and thus, I need to move on.” But where? The upcoming art show needed to be somewhere close by or nobody would attend. While she had no choice but to leave town right after the opening, at least she could leave on a triumphant note.

“I don’t need the rent. Let’s keep a running total, and after you’re hugely successful, you can pay me.” He ran a broad hand through his hair. “Stop being impossible.”

She wasn’t a charity case. Plus, the last person she wanted to owe was the sheriff. The man viewed the world in clear, unequivocal lines, and she lived in the gray area. A fact he could never know.

“I’m sorry, but I’m not taking advantage of you.” She was out of money, and no way would she stick around.

He sighed. “Juliet, I don’t need the money.”

The words from any other man would’ve been bragging. Not Quinn Lodge. He was merely being nice…and telling the truth. His family owned most of Montana, and he’d invested heavily in real estate. The guy owned many properties, including the two-story brick building that had held her gallery for the past few months, since she’d arrived in town.

A cell phone buzzed from his pocket. He drew it out, frowned at the number, and then looked back up at her. “I, ah, need to take this. Do you mind?”

“No.” Darn if his manners didn’t make her feel even more uncomfortable.

“Thanks.” He lifted the device to his ear. “Lodge here.”

He listened and slowly exhaled. “Thank you, Governor.” He shook his head. “I don’t think so… Yes, I understand what you are saying.” Dark eyes rose and warmed as they focused on Juliet’s hardened nipples. She’d cross her arms, but why hide? It wasn’t like the sheriff was concerned about the massive erection he was still sporting, and she could be just as nonchalant as he. She dragged her thoughts back to his ongoing conversation.

“I would, but I already have a date.” That dimple flashed again, this time longer. “Yes, I’m seeing someone—Juliet Montgomery. She owns the art gallery in town. Of course she’ll be at the dance as well as at the ride. Thank you very much.” He slid the phone into his pocket.

Tingles wandered down Juliet’s spine. Several of her fantasies regarding the sheriff included being part of his everyday life. Of course, many more centered on his nights. “We’re dating?”

“Well now,” only a true Montana man could drawl a sentence like that—“how about we reach an agreement?”

She frowned even as her clit sprang to attention. Her raging hormones would love to reach an agreement. “I’m not for sale, Quinn.”

He lost the smile. “I would never presume you were, darlin’. Here’s the deal—we both need help. How about we help each other?”

Without knowing the facts, she knew enough to understand this was a bad idea. No matter how many tingles rippled through her abdomen. “Why did you tell the governor we’re dating?”

“He tried to fix me up with his niece, and I needed an out. You’re my out.” Dare and self-effacing humor danced on his face. “How about we date for the next six weeks, just until the election, and you keep the gallery rent-free? You’d really be helping me out.”

Quinn was up for reelection for the sheriff’s office. She shook her head. “You don’t need to play games. Everybody loves you.”

“No. The people in the town of Mineral Lake like me. But Maverick County is a large area, and I need the governor’s endorsement. The last thing I have time for is campaigning for a job I love when I need to be doing that job.”

Considering she’d be leaving soon, maybe she should provide him some assistance. “You have more money than the governor. Buy some ads.”

“I’m not spending money on ads. It’s a waste as well as an insult to hardworking people.”

“Tell the governor you aren’t interested in his niece.” Juliet narrowed her gaze. Quinn Lodge didn’t kowtow to anybody.

“Refusing the governor is a bad idea.” He stalked closer to the ladder. “His niece is Amy Nelson, a woman I briefly dated, and she wanted more. Her daddy is Jocko Nelson, and he’s more than willing to spend a fortune backing Miles Lansing for sheriff. My already dating somebody saves my butt, sweetheart.”

The last thing she wanted to talk about was his fine butt. Nor did she want to think about him dating some other woman. “I’m not your solution.”

“Besides”—he reached the bottom of the ladder and held up a hand—“aren’t you tired of dancing around this? For the last few months, we’ve danced around this.”

“That’s what responsible adults do.” She automatically took his hand to descend.

Electricity danced up her arm from his warm palm.

“Bullshit.” He helped her to the hard-tiled floor. “You feel it, too.”

Yes, she did, and the crass language actually turned her on. But he didn’t know her, and he wouldn’t like her if he did. “I’ve chosen not to act on any temporary attraction.” As a tall woman, it truly unnerved her when she needed to tilt her head back to meet his gaze. “How tall are you, anyway?”

He shrugged. “Six four, last time I checked. How about you?”

The man was crazy. She tugged her hand free. “I’m not dating you.”

“I know. We’re pretending.” He glanced around at the many paintings on the wall. “Are these from Sophie’s new collection?”