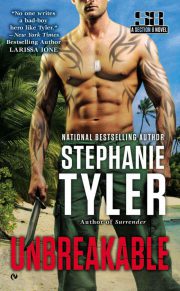 A cabal of operatives with dangerous pasts teams up to work black ops missions. Their weapon: deception. Can they help one of their own before he goes too far?
When Gunner agreed to help Section 8, he didn’t realize he’d be pulled back into the shadowy world he thought he’d escaped forever. The son of double agents, he was initiated at a young age into the cold world of espionage when his father forced him to work for international smuggler Drew Landon. And when Gunner’s past with Landon threatens the other mercenaries, and, most important, Avery, he makes an impossible choice…and disappears.
Avery’s not willing to give up on Gunner. The attraction between them has been there from the start, and she rallies Section 8 to help him. She knows there’s only one way to keep Gunner safe: fake his death and take him off the grid. But when she finally locates him, Gunner is a changed man, harder, more desperate, and on the edge of self-destruction. And only Avery can find a way to free him from Landon—and from the demons of his past—before it’s too late.

The man secured to the metal chair in the middle of the cinder block room still fought.

That was more disconcerting than anything. The Gunner she knew would’ve been chill, sitting calmly, watching and waiting. This man was wild. Untamed.

Or maybe these men are one and the same. Maybe you only saw what you wanted to.

He didn’t even look the same. His hair was dark, no sign of the bright blond that seemed so natural with his coloring. The dark hair made him look far more dangerous. She’d dyed her hair back to its natural blonde color from the dark brown Gunner had picked for her. It was some kind of odd role reversal. And it looked oddly right on him.

“I didn’t know your hair was dark,” Avery said, because she couldn’t think of anything else.

“Now you do.” His lips curled derisively and she wondered which was the real Gunner—that’s how good the man in front of her was. She was doubting the one she’d met at the tattoo shop months earlier, the one who’d taken her in, helped her and her brother. The one who’d risked everything, revealed himself to save all of them.

Jem had been circling Gunner for a day and a half, alternating between talking and yelling and punching. Torturing. Using depravation and exhaustion to make him vulnerable. And Gunner simply took it. All of it. Used it to fuel his rage.

The chair creaked with the pressure he put on it as he rocked back and forth, struggled to get out of the bonds. At one point, Jem kicked it over and Gunner managed to slam himself and the chair back into the upright position.

She thought her heart might actually break. She’d murmured, “Please bring him back,” so many times over the past months it had worn a groove in her brain.

Now that he was right in front of her, she was still saying it.

It would’ve been easier if Gunner ignored her, but he was able to meet her eyes so easily. They were flat. Dull. And they looked at her with complete contempt.

“What has he done to you?” she couldn’t help but ask.

He gave her a grin that was more like a leer. Spat blood in a straight line through his teeth and refused to tear his gaze from hers. “He didn’t do anything. This is me, Avery. I told you—go to Key and stay the hell away.”

Jem brought her in here because he knew that would make it worse for Gunner. Avery agreed, knowing how hard it would be on all of them. Knowing Gunner might never forgive them.

Jem could live with that. Could she?

Avery was dancing on the bar.

She wasn’t sure how she’d gotten pulled up there, but had to admit she didn’t care. When she looked over, Grace was dancing up there too, along with several other women shaking their asses to the local rock band intent on tearing the house down. The loud vibrations from the bass and drums, the sexy screech of the lead singer thrummed through her body and seemed to go straight through to her soul. It was loud enough to drown out everything . . . except her feelings for Gunner.

Those feelings made every note amplify, and God, it felt good to just have fun. There was a time for mourning, and that wouldn’t end soon, but they all needed this. Her brother, Dare, was smiling as he watched Grace—Avery had known they were perfect for each other from the first time she’d seen them together. Jem and Key, brothers and Avery’s friends, were keeping an eye on them but chatting up some women in the corner at the same time.

She glanced around for him, found him standing almost right in front of her, watching her. They locked eyes for a long moment while she danced. Just for him.

He’d been watching her like that the whole night. Circling her, but always staying just out of reach.

This bar was down the alleyway from his tattoo shop, one of the first places she’d gone when she’d arrived in New Orleans. And somewhere along the way, maybe even from the first day she’d slammed into his shop, she’d fallen for Gunner. The tattoo he’d given her had cemented it, pink and white flowers trailing along her side, grazing a breast and a hip. It was so graceful. Perfect. He’d marked her and in front of Jem and Key. And things might’ve progressed naturally between them if not for the turn the mission had taken.

The mission that would always haunt them.

No, here in this bar, she was drinking and dancing. She was a woman who wanted a man to finally decide the timing was right. If she’d learned nothing from the past months, it was that whoever dubbed patience a virtue was a goddamned liar.

The band segued into a new song—still a wild one with a slower, sexier beat. If she jumped down, Gunner would catch her. She was about to test her theory when a guy popped up next to her, grabbed her hands and began dancing with her.

At first, it was all friendly and fun, and then he was tugging on her too roughly, pulling her close, and when she glanced at Gunner, his expression had grown tight.

“Buddy, hands off,” she said, because the last thing they needed was trouble.

But the guy was past the point of reason. He was sloppy, drooly, unattractively drunk and although she could handle him on her own—and easily—she decided that playing damsel in distress would still allow her to remain dancing on the bar.

Gunner raised a brow at her and she gave a quick nod. In seconds, his tattooed arms shot up and grabbed the guy off the bar as if he weighed nothing. At first, he flailed and cursed. When he saw who he was up against, he stilled. Which was smart. Gunner was six feet five inches with spiky blond hair and covered with tattoos. A big guy with an expression that read you’re going to get hurt if you don’t cut the shit.

“Hey, get the fuck off my friend,” a male voice yelled above the music.

Gunner turned in time to stop a fist from exploding into his face. Still holding on to the drunk guy by the front of his shirt, he shoved the other guy’s arm down and yanked it behind his back.

“This can’t be good,” Grace said in her ear loudly. Because the music hadn’t stopped. If anything, it seemed to ramp up in anticipation of the impending, inevitable fight. “Where’s Dare?”

Avery pointed to where her brother had jumped into the fray with a gleeful yell, diving headfirst into several men the bouncers were trying to pull apart. Some of the fighting included breaking beer bottles, and suddenly someone was thrown at the bar. At them.

Before she could do anything, Grace was grabbed to safety by Jem and Avery was whooshed off the bar into strong arms and found herself held against Gunner’s chest. For a moment, their faces were inches apart and it would be so easy to kiss him. Actually, the perfect place—her refuge from the storm.

Yes, maybe have another shot of whiskey, Avery.

And then Gunner carried her and placed her in the safety of a corner near the back hallway next to Grace and flew into the melee.

“They’re all enjoying this.” Grace pointed first to where Dare was fighting with a couple of biker types. And smiling.

“For the love of all that’s good and holy,” she muttered when she saw Jem throw someone over the pool table. Key caught the guy and tossed him back to Jem.

Avery and Grace shoved away anyone who came too close to them, both trying to keep an eye on the men. Avery automatically scanned the crowd for weapons, like knives or broken beer bottles. Because if you were going to brawl, it should be about fists.

“I hope this place doesn’t get raided,” Grace said.

“Considering the owner just hung a man by his pants on a hook, maybe not?” Grace asked, and Avery looked to where the drunk guy who’d manhandled her literally hung by his belt loops on the coatrack nailed to the wall. “Is this what college would’ve been like?”

“I guess we’ve got some making up to do.” She noted that the bouncers had called in reinforcements. Gunner was talking to one of them who looked as if he could pick the pool table up with one hand, and he was shrugging sheepishly, looking like a little kid who’d gotten caught but was having too much fun to care.

“Closing time!” the bartender yelled, and Avery heard the sounds of sirens in the distance. A normal sound for this bar at this time of night. It was nearing two in the morning and Grace took her hand and led her out the back door and around the outside alley toward the front.

Avery glanced over at the woman who’d set up shop outside the bar, promising the drunk boys and girls who stumbled out lifetimes of happiness and love and babies. “No thanks.”

“You don’t want to know your future? To see what’s coming?” the palm reader persisted.

Would knowing what she knew now have made Avery do anything differently up to this point? She could confidently answer no. She shook her head and let Grace lead her down the alley, both giggling giddily. Drunk, but fun drunk. Anyone who saw them might think they were two single college girls. They’d be so very wrong, but Avery liked the idea of being normal every once in a while.