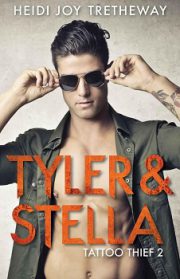 Stella Ramsey always says bad boys can’t break your heart. They don’t call, don’t cuddle and don’t send flowers—but what do you expect? No strings means no regrets.
When the biggest story of her fledgling music journalism career nearly ruins her relationship with her best friend, Stella has one chance to redeem herself. She promises the bassist for the rock band Tattoo Thief anything in exchange for behind-the-scenes access. But Tyler doesn’t want anything. He wants everything—and that’s more than Stella is prepared to give.
When Tyler’s explosive secret thrusts Stella into the media spotlight, she must choose between selling the story and telling the truth—and exposing the truth about herself.
Tyler & Stella is a sizzling story of lust, lies, and sacrifice, revealing how much love can forgive.
This book is recommended for mature readers—it contains steamy romance and feisty characters who use strong language.

For the life I saved one day.

Alis volat propriis: She flies with her own wings.

I’ve never hated myself as much as I do right now.

My best friend Beryl just ran to the bathroom in tears and I’m left holding her phone as a video plays. It’s just a guy in a hotel room, playing his guitar and singing.

If you won’t/ I will

But I’ll try for your sake

God, it’s stunning. Gavin Slater’s sandy hair flops forward on his face as he concentrates on a chord progression and a pang of envy churns in my gut.

Not that Beryl shouldn’t have this. She should. I want her to have a sweet, beautiful, impossibly famous rocker writing her love songs and remembering her birthday.

But I also want that for me.

Even just the remembering my birthday part. Even if he isn’t famous or beautiful.

And while I’m making a birthday wish (even though it isn’t my birthday), forget the boys. I’d be happy with a decent place to live and a boss who doesn’t send me to shitty gigs like this one, to write stories about bands that aren’t famous and don’t deserve to be.

I try to tune out the band on stage now. Playing louder doesn’t help their cause and the lead singer’s screeching makes me more uncomfortable than watching Miley Cyrus twerk.

I tune out everything except this one perfect video on Beryl’s phone that would rock the world of rock. It’s an entirely different side of Tattoo Thief’s lead singer that fans have never seen, and it’s heart-stoppingly perfect.

It isn’t fair. I’m the music journalist and somehow Beryl gained access to a band that’s been at the top of the charts for more than a year. I’ve been to two hundred and ninety-two shows since I moved to New York a year ago, and I’ve never gotten a true insider’s look at a band even half as famous as Tattoo Thief.

I glance around and Beryl’s still in the bathroom. I tap her phone’s screen a couple of times and see my last text, telling her the address of this club and to “wear something saucy.”

Before I can overthink it, I e-mail the video to myself. I need a closer look.

The journalist in me rationalizes this. I’m not stealing the video. Beryl showed it to me. And this could be a great story—the best of my career (what little there is of it).

I need another drink.

A bartender with fuchsia hair breezes by and I avoid her gaze. I wait a few minutes, then straighten to my full five-foot-not-quite-two when Grady walks by.

He’s the other bartender. And unlike Miss Fuchsia, he’ll slip me free drinks all night long. I’m still in his little black book, I think, unless he’s got a regular girlfriend now.

I clasp my arms in front of me to display maximum cleavage (not much I can make of a B-cup, unfortunately) and wink at Grady. He nods, accepting my telepathic order of a couple more shots.

It’s Beryl’s birthday and we’re doing tequila. I knocked back a few before Beryl showed up and we’ve done two together, but I barely feel buzzed. She weaves unsteadily between the tables on her way back from the bathroom.

Is alcohol or emotion getting the better of her? Her face is blotchy and tendrils of damp, curly hair hang around her face.

I motion to the shots. “Drink up, girlfriend. Looks like you got a pretty killer birthday present.”

I slip the phone back in her purse and do my shot quick, then press the other shot glass into her hand, trying to tease real joy from her weak smile.

Beryl follows my lead—lick, shoot, bite. “That was a shock.”

“So let’s go. I’m going to blow off this show for a different story. And you’ve got to be home when loverboy calls.”

It’s nearly midnight when I exit the subway on the Lower East Side near Neil’s apartment. I walk the last couple of blocks at a fast clip while trying not to look over my shoulder.

It’s not the greatest neighborhood and I’m small, my skirt is short, and I don’t need any extra attention.

Not to mention I feel like a thief. Which I am.

“Pretty lady, you got some change?”

I yelp when a panhandler steps out of a doorway into my path. I thought I’d lived in New York long enough to become inured to them, but this one scares me.

I shake my head, avoid eye contact, and give the shaggy-faced man in a drab olive jacket a wide berth. I listen for a sound besides my heels tapping on the sidewalk to make sure he isn’t following me.

Another half-block and I’m home. Well, the only home I’ve had for a month. When my ex-boyfriend Blayde and I split up in early June, he took off. That’s when I invited Beryl to live with me when she moved to New York, figuring we could share the rent.

Then Blayde came back and kicked me out because his name was on the sublease. Beryl got a house-sitting gig through her uncle’s company, and I convinced one of the other writers for The Indie Voice to let me stay with him while his roommate is traveling.

I should be more grateful to Neil for this temporary room, but he is by far the grossest gay boy I’ve ever met. His entire apartment is one sloppy pile after another and I’m sure he’s never cleaned a bathroom in his life.

I walk up three flights, knock, and unlock the apartment when I get no answer. That’s one of Neil’s rules, even though I live here, too. I have to knock.

I turn on the light before I step into the apartment. Once, I failed to do this and tripped over two ripe takeout boxes in the front hallway.

The living room isn’t too bad and I’m relieved. My internal debate over whether to write first or clean first is solved—definitely the cleaning—and I do the dishes, Swiffer the wood floor, wipe down the bathroom and straighten a bunch of Neil’s piles.

I’m paying my dues for the free room this month, and I suspect Neil is being even grosser than usual.

I flop on my borrowed bed in my borrowed room. Neil’s roommate, Violet, covered her walls with black-and-white photographs, many of them nudes. They’re good—some are even great—but together they seem kind of menacing.

I pull out my laptop and my phone, concentrating on my next task—writing the best freaking story of my career. The kind of story with memorable lines that other music critics will quote. The kind of story that doesn’t just describe a superstar like Gavin Slater, it defines him.

I sift through my memory for the few details Beryl learned about Gavin while house-sitting for him. I wish I’d asked her more questions, but she struggled for answers herself. She let me see inside his penthouse, which was amazing, but she was always guarded about the guy.

I rearrange the pillows behind me, pick at a hangnail and again survey the rows of nude portraits. I’m stuck. How do I write about the real Gavin?

I replay Beryl’s video, the one Gavin made for her birthday. This is the real Gavin, I’m sure. He’s vulnerable, exposed, and screams sex appeal. I close my eyes and listen to the rasp in his voice, hear the way his mouth forms the words, feel the music as his voice rises to carry a note before he lets it fall.

I play the video twice more until I know what to write. I start by describing how Tattoo Thief’s music has a driving, predatory nature to it, especially on their last album, Beast.

But this song is a retreat, a recovery from loss, and a promise of renewal. It’s the most honest thing I’ve heard from Tattoo Thief since their tracks became over-engineered. On Beast, you don’t even hear a unified performance, just stitched-together vocals based on the producer’s taste.

Did you know Adele sings off-key? It’s a musical embellishment called appoggiatura, an Italian term that means to lean. What Adele did with “Someone Like You” is what Gavin is doing with “Wilderness,” hitting a note on-beat but slightly off-key at first, then leaning into the melody to resolve the dissonance and reach the harmonious note.

If producers Auto-Tuned Adele, she wouldn’t sound like herself. Her song would be flat. The discord is what makes her music feel more alive. That’s how I feel when I listen to Gavin Slater perform “Wilderness.”

I read over my story, tweaking a few typos here and there, and rewriting some awkward sentences. I make the lead sentence snappier and more provocative. I wrap up the story with a song-lyric kicker.

Seven hundred and twenty-four words. That’s sharp work in a little over two hours and I’m ready to file my story.

I drop the text and video files in my email and put my bastard editor’s name in the SEND-TO field, with the subject line: Tattoo Thief’s next hit single? Exclusive video, just to be sure he opens it tomorrow.

I mean today. It’s three a.m. on Sunday and I’m unfortunately sober, but I’m high from the rush of writing. This story could go big if it’s picked up on the wire by other publishers. It could go national in a matter of hours.

My mouse hovers over the SEND key and I stop. I should close my laptop and walk away to give myself breathing room. Can I do this do to Beryl? To Gavin?