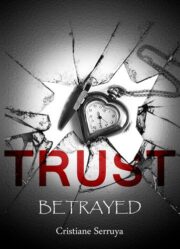 In BETRAYED, the second installment of the Trust series, Sophia, Ethan and Alistair will face and revisit their past dark deeds.
Each one of them will need to overcome their guilt, fear and pain and learn to see themselves through forgiving eyes.
Or succumb to their misery.
Alistair Connor MacCraig, a powerful banker, and Ethan Ashford, a steel tycoon, are both in love with Sophia Leibowitz, the ravishing owner of Leibowitz Oil.
Sophia fells for Alistair’s seduction. She is determined to have a relationship with him but a dark and terrible secret lurks beneath the surface she presents to the world. When she regains her memories, shame and fear will take control of her. Will she be able to find peace within herself?
Alistair is in love with Sophia but he has difficulties overcoming his guilty over his daughter’s death and his sexual preferences. Certain that he doesn’t deserve to be loved, he would do everything to push Sophia away, despite his love for her. Will he be able to find redemption?
Ethan, no less haunted by his secrets and lies, lives in an alternate reality because the loss of Sophia is too unbearable to face. He would do everything to have Sophia back in his arms.

To my dear youngest daughter, Giovanna, who brightens my days with her happiness, her laughter and her unending capacity of making light and fun of everything.

Thanks, baby. For being you!

The sound of paper being crumpled ripped through the silence in the office.

Reaching for the drawer, long and slender fingers pulled out another cream sheet with her name elegantly printed in navy at the top of the page. The fountain pen ran smoothly over the surface.

Our relationship is doomed. I can’t carry on with it. My heart is bleeding but I have to ask you to forget me.

I’m sorry. More than you can imagine but I know that, in the end, it’s going to destroy me. You are

The pen stopped midair and the woman thinned her lips. She crushed the sheet in her hand and threw it with rage in the already full wastepaper basket.

She wiped her tear stricken face with the back of her hands, pulled out another sheet and started again.

After five more tries, she grimaced and considered herself satisfied with what she would describe nonetheless as a pathetic result. But she hadn’t any more strength in her soul to start again.

She’d never felt so ancient in her whole life.

Fresh tears spilled on her purple T-shirt as she looked at the photos beside her computer. It’s a fitting punishment for what I did.

His mobile rang in the silent room. Once. Twice.

“Hello?” he answered on the third ring.

“Sir, I’m sorry to disturb you at this hour, but there is a situation.”

The man instantly pushed his fit and muscular body up, resting his broad back on the headboard.

“Something strange is going on. My contact just called, informing me she left her house after returning for just ten minutes.”

“No. I guess her daughter was with her because she wasn’t in the McLaren. They left in the Jaguar, but I don’t know if she was driving or not. Sir, I’ve checked her last calls and she booked a private jet. It’s supposed to leave from Heathrow in an hour and a half.”

“Heathrow?” He flung his body out of the bed in an agile movement and went to his dressing room. “Where is she going?”

He frowned as he picked up his carry-on and started filling it with clothes for warm weather. “Any problems with her family?”

“I don’t believe so, sir. I’d say that it’s a matter involving her.”

“Cancel her flight. I’m heading to Heathrow. Inform my driver that I’m going down in a few minutes.” He closed his suitcase with finality. “Anything else?”

“Did she call him?” He unlocked his safe and retrieved his passport and some money.

“Shoot,” he walked into the bathroom with a white linen shirt, black briefs and a pair of dark blue jeans in his hand.

A dark smile spread over the rugged face and azure eyes flashed. “His loss. Keep an eye on her and brief me again in fifteen minutes.”

“How may I help you?” His deep voice sounded tired and despondent even to himself.

“What have you done to her?” asked the angry male voice on the phone.

What? “I...” he halted, and looked astonished at his brother, who raised an eyebrow. He put the call on speaker. “I’ve done nothing. Where is she?”

“She is gone. Nobody knows where she is. She left you a letter,” a heavy breath was exhaled.

“Her memory’s back. She remembered the night she was shot. She may be suffering from post-traumatic stress disorder,” his brother whispered to him and he repeated the information.

The man on the other side of the line shook his head and a blond lock fell over his forehead. He pushed it back in a brusque gesture. “You bastard,” he growled. “You’re the reason she’s disappeared.”

“I don’t get it.” He raked his fingers in his long, raven hair. “What have I got to do with it?” He was stupefied; the only thought that made sense was that she was gone.

“Shocked? What was she looking at?”

“You don’t fool me. I’m expecting you here in ten minutes max and you’d better have a good explanation for all this. Or else, I’ll report you to the police. In case you don’t know, these kinds of sexual preferences are considered a crime.”

Fuck. “Now. Wait just a minute.” His nostrils flared. As did his temper. “Stay out of this. You have no right to interfere in our relationship. We are adults and it was consensual-”

His brother rose from his place and put a hand on his shoulder trying to calm him down.

“It’s still a crime. There is no such thing as consent in these cases. Ten minutes. And just to inform you, I opened the letter.”

“Violation of correspondence is a crime.”

“I don’t give a fuck. She’s gone and you’re responsible.” The blond man banged the handset in its cradle, hanging up.

“She is gone,” he whispered again, heartbroken and shoved his elegant fingers in his long hair, resting his forehead on the palms of his hands for a second before he sprung from the chair, “let’s go.”

As they waited by the elevator, his brother murmured, “You must have really fucked up this time. She doesn’t seem the type to flee from a battle.”

He looked at the taller man who looked so much like him and voiced his worst fear, “How am I supposed to live without her?”

The City of London Bank Headquarters.

“Alistair Connor!” Tavish snapped his fingers in front of his brother’s face. “Wake up, dammit.”

Alistair looked at his younger brother and blinked away the thoughts of Sophia’s naked body. “I’m awake, can’t you see?”

Alistair rubbed a hand on his nape and looked sheepishly at Tavish, “I guess I wasn’t paying attention. I’m sorry.”

“You’ve got it bad, man.” A broad smile split Tavish’s rugged face and he even chuckled. “I never thought I’d see the mighty Alistair Connor daydreaming.”

“I’m not the mighty Alistair Connor. And I wasn’t daydream-” he interrupted himself and smiled, “Okay, I was. She’s everything a man could wish for, Tavish Uilleam.” And his grin turned almost idiotic with happiness.

“Have you told her about Heather?”

Alistair’s smile waned. “Fuck. You had to spoil it, Tavish Uilleam.”

“You’ve told her about your preferences?”

“She is too innocent and-” Alistair sighed. “The truth is I’m afraid of scaring her away.”

“She has the right to know, Alistair Connor. Or is she worth a change?”

“She’s worth everything. Anything.” He looked toward the huge windows of his office, his gaze distant. But I hurt her. I can never apologize enough.

“But?” Tavish tilted his head, studying Alistair’s face. “Alistair Connor, I really think you should see a therapist. If she’s half what Alice told me...” He looked his brother in the eye, “she won’t abide your sexual orientation.”

“Have you been talking about Sophia behind my back?” Alistair’s face darkened. “What is your interest in her?”

He sustained the dark stare. “None. My interest rests on you. And our family. I won’t see another Heather-”

Alistair banged his fist on the table startling his brother. “Sophia is nothing like Heather.”

“Okay, okay,” Tavish put his hands up, “I know that now.” He raised from his chair and put both hands on the desk, leaning toward his brother, “But do you? Are you ready to be in a relationship with her? A real, normal relationship? Is she strong enough to avoid turning into another Heather? Or are you going to degrade her like Heather did with you?”

Sophia tried in vain to stifle a yawn and giggled, as Edward watched her with keen eyes from the armchair opposite her desk.

His blue eyes twinkled and he grinned wickedly at her. “Not enough sleep?”

“Nope.” Her voice was still a bit hoarse and she fingered the Hermès printed silk scarf she had put around her neck.

“I take it the CEO of The City of London Bank knows his job well?”

Sophia just smiled and blinked trying to fight the sleepiness that was taking hold of her.

“I told you, Sophia, third one’s the charm.”