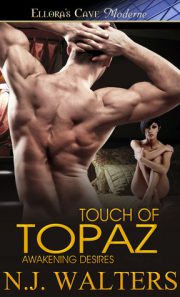 Security expert and ex-Army Ranger John Knight broke the cardinal rule of being a bodyguard-don’t get involved with the client. One torrid afternoon of hot sex with Topaz Jewel was all they had together before his job was done, and she’s been avoiding him ever since. He’s been hired to protect her once again, and this time, when the job is over, he’s won’t let her slip away. Topaz is an independent businesswoman with no time in her life for a permanent relationship, especially not one with a man like John, who’s used to adrenaline rushes and danger. There’s no denying their sexual attraction, but she’s determined to play things smart. John doesn’t take her home when the job is finished, but to an isolated cabin. It isn’t every day that a bodyguard kidnaps his client, but he knows they’re meant to be together-and he’ll use their sizzling passion to prove it.

Thank you to my husband, who inspires me every single day of my life. Thank you to my editor, Shannon Combs, for her tireless dedication to making each of my books the best it can be. And last, but certainly not least, thank you to all my readers who allow me to do a job I love. There are not enough words to express my gratitude.

The damn woman was making him crazy.

John Knight stood at the back of the courtroom, ignoring the legal proceedings and watching the woman on the witness stand instead.

Topaz Jewel lived up to her name. In her red power suit and killer high heels, she shone in the dull courtroom like a beacon of light, drawing the attention of everyone seated there. Her black hair was cut into a short, sleek hairstyle, which framed her heart-shaped face. John liked it even though he was usually attracted to women with long hair. Her golden-brown eyes were serious and nothing the defendant’s attorney said or did could shake her as she gave her testimony.

He was intimately familiar with her long legs and slender torso. Her breasts were etched in his memory and the full, firm mounds with pink-tipped nipples were enough to bring a strong man to his knees.

That’s exactly what had happened to him six months ago when he’d first laid eyes on her. He’d broken the first rule of the job as a professional bodyguard—never get involved with the client.

He still wasn’t quite sure how it had happened. Topaz was a take-charge, confident businesswoman, who had made it abundantly clear she had no time in her life for a man, especially one like him. If she dated at all, she tended toward lawyers, CEOs and financial types, men in three-piece Italian suits, certainly not an ex-Army Ranger who co-owned a security company with his twin brother.

John dragged his attention away from Topaz and let it graze over the crowded courtroom. It was his job to protect her, and he took his work very seriously. He’d originally been hired to protect her when her sister Emerald attracted a nasty stalker last summer. Now that same man was on trial for his crimes, and the media hoopla surrounding it had brought the crazies out of the woodwork, which was why her father had hired him again as protection, much to Topaz’s objections.

Why couldn’t she have been from a normal family? That would have made his life much easier. But no, her parents were Moon and Aloysius Jewel, a famous folk duo from the sixties and seventies. The media was having a field day with their past and that included their three daughters Topaz, Emerald and Sapphire. Famous parents, three beautiful women and a stalker all made for a great story and the media was milking it for all it was worth.

The fact that the sisters owned Sisters’ Jewels, an upscale boutique in New York, only added to the hype. Since the trial started, none of the sisters could go anywhere without paparazzi following them. Emerald’s husband was looking out for her, but he and his brother Jake had been hired, once again, to protect the other two sisters.

If only Topaz would cooperate. The woman gave new meaning to the definition of stubborn. He’d lay odds that her picture was beside the word in the dictionary. And he should know. He’d spent several weeks with her last summer and almost a month this time. In the time in between, he hadn’t been able to get her out of his mind, and he’d sure as hell tried.

Memories of that one hot-and-sexy tumble they’d shared on the last day of the job this past summer were etched in his brain. He could remember it as though it happened only yesterday…

Topaz pushed through the front door of her apartment with John right on her heels. “You had no right to do that.” She slammed her purse down on the antique sideboard that sat to the left of the door in the small foyer.

“I had every right.” John shut the door and engaged all the locks before resetting the alarm system. “Until your sister’s stalker is caught you shouldn’t be making dates with strange men. Hell, you shouldn’t be dating at all. The stalker could be someone you know.”

She shot him a glare and put her hands on her hips. Fire lit her golden eyes and energy crackled between them. Every muscle in John’s body tensed, ready for whatever the little hellcat could throw at him. In the back of his mind, he realized he was actually looking forward to it. Anticipation thrummed through him, his dick stirred.

Now was not the time for this. He tried to will his body back into submission, but it wasn’t easy, not with Topaz standing there looking cool and classy in a deep-blue sundress and tissue-thin, white summer sweater. Her shoes matched the dress, a little detail that caught his eye. Didn’t matter if she was hanging around the house, going to work or running errands, the woman was always put together in a way that looked as though it took her hours. But John could attest to the fact that it didn’t take nearly that long. Her sense of style came easy to her, as easy as breathing.

“I hardly think that an investment banker is my sister’s stalker.” She stood with her shoulders thrown back and a gleam of triumph in her eyes.

“Aarrggh.” She threw up her hands in disgust. “There’s no talking to you. The man was simply asking me out for a drink and you had to go all Neanderthal and intimate that we were a couple.”

And it hadn’t taken much to chase off the stuffy banker. John didn’t let his grin of triumph show. He didn’t think Topaz would appreciate it.

She stalked toward him and drilled her finger against his chest. “You have to stop doing this. This thing has taken over my entire life.”

He felt sorry for her, for about two seconds and then irritation took over. “Look, your sister has it much worse than you do.”

Hurt flashed over her features, and she ducked her head and turned away. John immediately wished he could call back his words. Topaz usually met all challenges head-on. He’d never meant to hurt her, only to take her mind off the banker. “Topaz,” he began, but she waved him off.

“No, you’re right. I’m being bitchy. Just tired I guess.”

He dropped his hands on her shoulders and gave them a squeeze. “No, I’m sorry. But it’s my job to protect you.”

She whirled around and his hands dropped back by his sides. “I know I’m a job to you. I get that.”

His own temper flared. “You’re more than just a damn job.” The minute the words were out of his mouth, he knew they were the truth. He’d been watching her for several weeks. Hell, he was basically living with her. They ate meals together, he went to work with her and they even shared a bathroom. The only thing they didn’t share was her bed. And he’d spent many a long, hot night lying awake in her guestroom, listening to the swish of her sheets as she moved restlessly in bed. Topaz fascinated him with her quick mind, her focus on her business and her killer body.

“Right.” She started to turn away, but he caught her and spun her back around.

They stared at one another and heat flared between them. Both of them were breathing heavy and he wasn’t sure which one of them moved first. Their lips met and he groaned as he wrapped his arms around Topaz to hold her close.

She tasted sweet and tart, like the lemonade she’d had while they were out running errands. It suited her. He ran his hands over her spine and down to her butt. She groaned and parted her lips, and he slid his tongue inside, exploring her mouth, claiming it as his own.

His cock jerked hard and pressed against the zipper of his jeans when her tongue touched his. Her fingers speared through his short blond hair, holding him to her. Oh yeah, this was what he wanted. He didn’t want to talk, only wanted to feel.

He ignored the warning bell clanging in the back of his brain, didn’t need to hear it to know he was being stupid. But, for the first time in his life, he didn’t care. He wanted Topaz Jewel.

It was a living, breathing need that had taken over his entire life.

He cupped her first-class ass in his hands and lifted her against his rock-hard erection. She was a tall woman and the heels she wore added another few inches, bringing her up to a little more than six feet. He was six-three so she fit against him perfectly.

She tore her mouth from his. “This is crazy.”

He turned so her back was against the wall. “It is.” He dragged her sweater down her arms, letting it drop to the floor. The straps of her dress were thin and he didn’t see a bra strap. His balls just about exploded.

“Are you wearing a bra?”

A seductive smile crossed her lips, but before she could say anything, he tugged down one of the straps. Bare skin met his gaze. Holy hell, she’d been walking around all day without a bra. If he’d known, she might never have made it out of the apartment.

His fingers made quick work of the three buttons at the front of the dress. With each button he opened, he exposed more of her creamy white flesh. His knees almost gave out when he folded back the flaps to expose her magnificent breasts.

They weren’t too big or too small. They were perfect mounds tipped with pale-pink, velvety nipples. He touched his fingers to one, feeling it pebble beneath his touch. “You are so fucking beautiful.”

She made a small sound of pleasure in the back of her throat. Encouraged, he leaned down and took a delicate nipple into his mouth and sucked. Topaz moaned and clutched at the back of his head, her fingernails digging into his scalp.