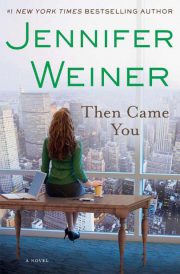 Jules Strauss is a Princeton senior with a full scholarship, acquaintances instead of friends, and a family she’s ashamed to invite to Parents’ Weekend. With the income she’ll receive from donating her “pedigree” eggs, she believes she can save her father from addiction.
Annie Barrow married her high school sweetheart and became the mother to two boys. After years of staying at home and struggling to support four people on her husband’s salary, she thinks she’s found a way to recover a sense of purpose and bring in some extra cash.
India Bishop, thirty-eight (really forty-three), has changed everything about herself: her name, her face, her past. In New York City, she falls for a wealthy older man, Marcus Croft, and decides a baby will ensure a happy ending. When her attempts at pregnancy fail, she turns to technology, and Annie and Jules, to help make her dreams come true.
But each of their plans is thrown into disarray when Marcus’ daughter Bettina, intent on protecting her father, becomes convinced that his new wife is not what she seems…
With startling tenderness and laugh-out-loud humor, Jennifer Weiner once again takes readers into the heart of women’s lives in an unforgettable, timely tale that interweaves themes of class and entitlement, surrogacy and donorship, the rights of a parent and the measure of motherhood.

“So,” said Estella, “I must be taken as I have been

made. The success is not mine, the failure is not

mine, but the two together make me.”

PART ONE. Sweet and Sour


The man in the suit was watching me again.

It was March of my senior year in college, a clear, chilly afternoon, when I felt what was, by then, the familiar weight of a man’s gaze, while I sat by myself in the food court. I looked up from my dinner, and there he was, at the end of the line for the salad place, looking at me the way he had for the past three weeks.

I sighed. The mall was one of my favorite places, and I didn’t want to give it up because of some creep.

I’d found the mall my freshman year. If you walked off campus, across Nassau Street and into a kiosk in the center of town, you could buy a discounted ticket with your student ID, and the bus would take you to a fancy shopping center with a fancy name, the Princeton MarketFair. There were all of the chains: a Pottery Barn and a Restoration Hardware, and Gaps, both Baby and full-grown, a Victoria’s Secret where you could buy your panties and a LensCrafters where you could pick up a pair of sunglasses, all of them in a sprawling, sterile building with marble floors and flattering, pink-tinted lights. At one end of the mall was a big, airy bookstore, with leather armchairs where you could curl up and read. At the other end was a movie theater that showed four-dollar matinees on Mondays. Between them was the food court.

Shortly after my discovery, I’d learned that only losers used public transportation. I’d found this out when I heard two of my classmates scornfully discussing a date that a girl we all knew had been on. “He took her to the movies. On the bus.” Giggle, giggle… and then a quick look sideways to me, for my approval, because, tall and blond and with two juniors on the varsity crew team vying for my affection, I couldn’t possibly fall into the busgirl’s category.

The truth was I liked the bus, and I liked the mall. It felt real, and Princeton’s campus, with its perfect green lawns and its ivy-clad, gargoyle-ornamented, stained-glass-windowed buildings, and its students, none of whom seemed to suffer from acne or obesity or even bad-hair days, felt like a film set, too wonderful to exist. On campus, everyone walked around as if they’d never had a second of doubt, an instant of feeling like they didn’t belong, carrying their expensive laptops and textbooks, dressed just right. People at the mall did not look as if they’d just stepped out of catalogs. Their clothes were sometimes stained or too tight. They walked past the shop windows yearning after things they didn’t need and couldn’t afford: end-of-their-rope mothers snapping at their kids, boyfriends sighing and shifting their weight from foot to foot as they lingered outside the dressing rooms at Anthropologie, teenagers texting each other from a distance of less than three feet away across the table; the fat people, the old people, the ones with walkers or oxygen tanks or wheelchairs — all of them reminded me of home. Besides, I could practically be guaranteed to never see anyone from school there — not on the bus, for sure; not at the movie theater, at least in the daytime; definitely not scarfing kung pao chicken from China Express. Maybe my classmates came here to buy things, but they never stayed long, which made the mall my secret, a place where I could be myself.

Most Mondays, when my classes ended at 2:00, I’d take the bus and I’d browse in the stores, maybe trying on shoes or a pair of jeans, and I’d see a matinee of whatever movie looked interesting, then have dinner in the food court, or at the sit-down seafood restaurant if I’d managed to pick up some extra hours at my work-study job in the admissions office. For less than twenty dollars, I could make a whole afternoon and early evening pleasantly disappear.

I looked up from my plate again. The man was holding his briefcase, standing in profile, looking like he was trying to decide what to do next. It could, I knew, go one of two ways: he’d keep staring, or he’d work up the nerve to cross the tiled floor and say something.

When I was thirteen, my father sat me down and gave me a little speech. “There’s something you should know,” he’d said. We were in the family room, half a flight down from the front door, a room with pine-paneled walls and mauve-colored carpet and a glass-topped coffee table on which there were a decade’s worth of yearbooks, one for every year my father had been the yearbook advisor at McKinley Junior High.

“What’s that?” This was in the fall; I’d been wearing my soccer uniform; shorts and shin guards and a sweatshirt I’d pulled on for the bike ride home. My dad was in his worn black recliner, a glass of ice cubes and whiskey in his hand, still dressed in the coat and tie he wore to school. My mom was in the kitchen making baked chicken — she’d dip each piece in a mixture of buttermilk and mustard, then roll it in cornflake crumbs. That chicken, along with Rice-A-Roni and a cut-up head of iceberg lettuce doused in bottled ranch dressing, was my favorite meal, and all I wanted was to take a hot shower, pull on my sweatpants and a too-big T-shirt, eat my dinner, and get to my homework. For the first time, math was actually hard for me, and I knew I’d need at least half an hour to get through the problem set we’d been assigned.

My dad ducked his head, sipped his drink, and said into the knot of his tie, “Men are going to look at you.”

This wasn’t news to me, and hadn’t been for a while. “It’s not your fault, Julia,” said my father, pulling off his glasses as he spoke. “It’s what men do. It’s how we’re wired, maybe, men and women. We’re programmed to notice each other.”

I’d flicked my ponytail over my shoulder. I was already five foot four inches of the eventual five foot nine I’d reach. My hair was thick and butterscotch blond, and that fall I’d graduated from a training bra to an actual B-cup, and started junior high. These events combined made me feel as if my body wasn’t really me anymore, but something I lived inside; a borrowed blouse I’d snuck out of my mother’s closet, something I needed to treat carefully and could, if I was lucky, one day return.

Men will look, my dad had said, watching me with a mixture of love and regret. Sometimes, he’d quote a line of Yeats, about how “only God, my dear could love you for yourself And not your golden hair.” It made me feel strange, a little proud, a little ashamed, especially because the truth, which maybe he’d guessed, was that men were already doing more than looking: they’d hoot, they’d whistle, they’d make sucking, smooching sounds when I was alone, walking home from school, and they were in their cars. One of my classmates, Tim Sather, seemed to have decided that his mission in life was to snap my bra strap as often as he could, and Mr. Traub, the gym teacher, would wrap his arms around me, letting his jogging-suited torso press, briefly but firmly, against my back as he helped me with my volleyball serve. That summer I’d been wearing my swimsuit, a dark-blue one-piece, and running through the sprinkler with the Lurie kids, whom I’d been babysitting at the time, and I’d looked up to find Mr. Santos, who lived next door to the Luries, staring at me over the top of his fence with his mouth hanging open. A few weeks later, my older brother, Greg, had gotten in a fight at the town park’s swimming pool. When my mother had fussed over his black eye and swollen cheek, demanding to know who’d started it, Greg had muttered that the boys had been saying stuff about me. My mother hadn’t asked him anything else, and I’d been embarrassed, unsure of how to behave. Did I thank Greg? Did I ask him what the boys had said, if I’d done anything to provoke it? Finally, I decided to say nothing, to pretend the whole thing had never happened. That seemed like the smartest thing to do.

The worst part wasn’t the boys; it was the girls, the ones who had once been my friends. She thinks she’s sooo pretty, I’d heard Missy Henried sneer to Beth Brock one day at lunch after Matt Blum, staring at me across the cafeteria, had almost walked into a table. Like I’d asked for him to stare. I had a mirror, and I’d seen enough magazines and TV shows to know that I was what was considered good-looking, maybe even beautiful. But the beautiful girls on TV or in those glossy pages all seemed happy. They never looked lonely, like their faces, their hair, their bodies were traps keeping them apart from everyone else. I couldn’t figure out why I felt guilty when boys stared, like I was lying, or offering them something I didn’t really have. All I knew was that Missy and Beth and I had been Brownies together; we’d trick-or-treated every October, giggling in the costumes that had turned us into cheerleaders or witches or Pink Ladies from Grease, posing on Missy’s front porch while her father struggled with his video camera. Now I was their enemy. Now they were on one side of a wall, and I was on the other.

“So what am I supposed to do about it?” I asked my dad. Back then, I thought he knew all the answers. Our house was full of books he’d read, biographies of presidents and scientists, thick hardcover novels with approving quotes from The New Yorker on their backs, different from my mother’s mysteries, which were bright paperbacks with actual people on the covers and titles spelled out in foil.