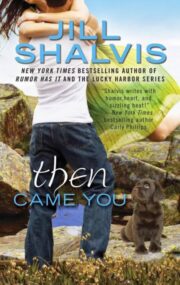 Veterinary intern Emily can’t believe she wound up in the small town of Sunshine, Idaho, instead of the Los Angeles clinic she had always imagined. Now she has to put her plans to move to L.A. on hold for a whole year while she fulfills the obligation of her vet school scholarship.
Then Wyatt, her gorgeous one-night stand from a Reno vet conference, introduces himself as her new boss. And Emily is just as drawn to his seductive looks and quiet strength as she was on that very steamy night. She soon learns that Wyatt isn’t just a laid-back doctor, but a delicious alpha male tempting her away from her carefully laid-out plans…

To Kelly Garcia for her endless patience and veterinarian advice. All mistakes are mine!

Also to Kristi and Christie and Lillie for always being willing to read and cheer me on, telling me to keep going even when I wanted to toss the book into a ravine and go work at Taco Bell.

I wanted to thank you for having me, Dr. Connelly—” Emily Stevens broke off and shook her head. Not quite right. She tightened her grip on the steering wheel in the parking lot of her new job. “I really hope to make a positive impact—” Nope, even worse. No one liked a brown-noser. She cleared her throat, looked into her rearview mirror and forced a smile. “I’m thrilled to be stuck in West Nowhere, USA.”

She drew in a deep breath, applied lip gloss—because everyone knew that was the same thing as courage—and got out of the car. It was early autumn, and the chill in the early morning air only served to remind her just how far from Los Angeles she really was. She looked around, taking in the towering, intimidating Bitterroot mountain range, backdropping what could only be described as a vast, wide open valley of the most pristine, remote land of meandering rivers and lakes she’d ever seen. Emily figured it was filled with bears and wild mountain lions, and probably Bigfoot for all she knew.

Having come from the land of freeway overpasses and interchanges, the wildest animals she’d ever seen were of the two-legged variety.

In front of her was Belle Haven, a wood and glass building housing an animal center run by Dr. Dell Connelly and his two brothers, Brady and Adam.

If only Belle Haven had been her number one choice on her list of dream jobs.

But it hadn’t been on her list at all.

She sucked in a breath. She could do this. She had to do this. In her first year of vet school, she’d accepted one of only two available grants. The repayment was a year of internship at either of the two animal centers who’d donated the money, and she always paid her debts.

She’d hoped for L.A., not Sunshine, Idaho, but that’s what happened when your mom’s multiple sclerosis flared up right before you left for college and you ended up doing school half-assed while trying to keep the rest of your life together—the other scholarship recipient got their first choice.

Shit happened, and Emily knew that better than most. Shit happened, people got sick and died, you picked yourself up and kept going.

What was one year anyway? And besides, by tonight it would only be three hundred and sixty four days left . . .

Pulling out her phone, she accessed her calendar, the one she’d labeled The Plan. It kept her sane, listing everything that had to be done, including her goals. More recently she’d added a list of the pros and cons of Idaho, though so far only the con column had anything in it.

Huh. Not nearly as helpful as she’d hoped. Next time she’d have to be more specific. She slipped the phone back into her pocket and kept moving.

The property was immense. Besides the big, main building, there was a barn, and pens off to the side. There were three guys in the first pen, two of them working a few horses, one leaning against the fence taking notes. All looking like they’d walked off a Marlboro Man photo shoot.

Not something she saw in L.A. every day . . . She pulled back out her phone and added her first check to the pro column—hot guys. She was still smiling when she entered the front doors to a large waiting room area.

Sprawled out in various positions on the floor were a golden retriever, a collie mix, two pissed off cats in carriers, and . . . a Shetland pony.

The pony stood next to a chair, calm as you please, while the woman holding his reins sat flipping through the latest Women’s Journal.

Not something you saw every day . . .

The front counter was a wide half circle, behind which was a woman working two computers and her phone at the same time. She was a strawberry blonde, beautiful, cool as a cucumber as she ran her world. A parrot was perched on her printer and a cat dozed in her lap.

This tugged another smile out of Emily. Animals owned her heart, always had. Hot guys and animals . . . a damn fine combination. Feeling better, and far more confident, she moved toward the counter.

The biggest St. Bernard she’d ever seen came around from behind it and gave her a friendly “wuff.”

Emily patted it on the head, and the St. Bernard “wuffed” again.

“Gertie wants you to pay the toll,” the receptionist said, nodding to the jar of doggie treats on the counter.

Emily gamefully pulled one from the jar and offered it to Gertie. The dog took it, slobbered her thanks, and lumbered back around the counter, where she thudded to the floor, making the ground shake.

“Graceful Gertie,” the receptionist said with a laugh.

“Wuff!” said the parrot in a perfect imitation of the dog.

The woman slid the parrot a long look. “We’ve discussed your language.”

The receptionist turned back to Emily with a smile. “How can I help you?”

“Oh good.” She looked vastly relieved. “Dell’s been asking every five seconds if you’re here yet. It’s been chaotic since Olivia left to have her baby last month—”

A man stuck his head in from a hallway off to the left. Emily recognized him as one of the guys from out front, the one who’d been taking notes.

“As a matter of fact,” the receptionist said, and pointed to Emily. “Emily, meet Dr. Dell Connelly,” she said.

“Great to have you,” he said. He had the coloring of a Native American, with dark eyes that cut straight to hers. “Sorry ahead of time, but we’re jumping right into the fire this morning.”

This only made her feel even more comfortable. “I live in the fire,” she said.

“Perfect. We need two extra hands in delivery. I’ll catch up with you later on everything else.” He gestured for her to go down the hall.

So down the hall she went. She passed a few exam rooms, an x-ray room, what looked like a staff room, and then a surgical room.

The back door was opened, flapping in the wind.

“He’s in the last pen,” someone in scrubs said, pointing outside.

Feeling a little bit like Alice in Wonderland must have after she’d fallen down the rabbit hole, Emily headed out the back door and to the last pen.

A man was there, on his knees, at the back end of a sheep. He wore cargo pants and a doctor’s coat over broad shoulders, his wavy sun-kissed brown hair a few weeks past needing a cut. There was something oddly familiar about it, something familiar about him.

The sheep’s head was down, her belly was clearly swollen with pregnancy, her sides heaving.

“I know, baby,” the man said. “Almost there, promise.” His tone changed then, still low, but now he was talking to Emily. “Welcome, New Girl. Can you come closer, or are you going to help by osmosis?”

At the sound of his voice, Emily felt the shock of familiarity reverberate through her as she moved into the pen.

“Glove up,” he said, still not taking his eyes off his patient. “Back pocket.” Keeping his hands on the sheep, he elbowed his jacket off one hip.

Emily stared at his butt, now revealed. It was a great butt, as far as they went. Really great. “Um—”

“We doing this today?” he asked.

Biting her lower lip, she reached out and snagged the gloves from the back pocket of his cargoes, doing her best not to cop an accidental feel while she was at it.

She pulled on the birthing gloves as the sheep emitted another bleat, this one sounding so pain filled that she winced in commiseration with mama sheep.

“Hurry up, New Girl,” the guy said. “Find your sea legs. Poor Lulu here isn’t going to wait for you.”

Emily eyed the muck in the pen, and then her new pants suit, which had been bought with the Beverly Hills clinic in mind, where she’d envisioned herself treating the pets to the stars and looking glam while doing it.

He moved over to make room for her and she kneeled at his side in time to literally catch the baby sheep and lower it to the ground.

The next half hour was a bit of a blur. The second lamb arrived in the wrong position, so she found herself up to her elbow in sheep. Literally.

“Close your eyes,” her mentor instructed.

She did, and he was right. It was much easier to “see” with her hands when her eyes were closed. The uterus tamped down hard on her arm, hard enough to bruise for certain, but she managed to guide the baby out. She stared down at the wiggly mass of goop and felt her heart stutter with the miracle of birth.

They helped Mama get her babies cleaned up, helped the babies get on all four wobbly, stick-thin legs, watching as they took their first sips from Mama. Covered in hay and muck, and sweating like crazy, Emily’s eyes misted with the beauty of it all.