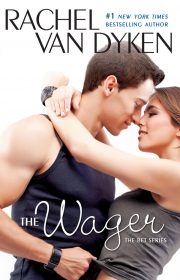 THE WAGER
Lose a bet, lose your heart…
What is it about a junior-high crush that can send an otherwise intelligent woman into a tailspin? TV reporter Char Lynn wishes she knew. Jake Titus is too rich, too handsome, too arrogant: a trifecta that once lured Char into the best night-and worst morning-after-of her life. Now they’ve been thrown together in a wedding party. It’s awkward, but survivable . . . until Jake stops acting like a jerk, and starts acting like the man she’d always hoped he could be.
If watching your brother marry your best friend is weird, being attracted to your best friend’s other best friend is downright bizarre. Unfortunately for Jake, Char hasn’t forgotten how he once tossed her aside. Worse still, Jake’s already-nutty grandma is even crazier about Char. Cue meet-cute shenanigans and all manner of meddling, and somehow, Jake’s falling. For Char. Now all he has to do is make her believe it . . .

To Grandma Nadine. You are truly the inspiration behind this book series. Thank you so much for being such a feisty, wonderful, and loving grandmother. I’ve been so blessed to have you in my life. Cheers to many more years past eighty-six, Grandma, and thank you so much for going to all those book signings with me. You are seriously one of my best friends. Pretty sure I want to be your vice president when you run for office—it’s never too late, right???

First and foremost I have to thank God for allowing me to live out my dream every single day of my life. I still wake up and pinch myself and I still fall to my knees in gratitude. Without Him—I am nothing.

Thank you so much to my editor Lauren Plude. Words cannot express how much fun it’s been working with you! Not only are you a kick-butt editor, but I know you care; it seeps out of everything that you do. I’m so incredibly blessed by your encouragement. I’ve said it before, I’ll say it again, I’m making it weird. I freaking love you!

Grand Central Publishing… wow, what can I even say. I felt like the new kid on her first day of school. You guys far exceeded my expectations (and still are!). From your cover artists to your publicity team—I can’t thank you enough for how much you’ve welcomed me and made me feel at home. Thank you, thank you, for taking a chance on me and for providing me this amazing opportunity to write for you. It truly is an honor.

Husband—Nate—best friend—thank you for not taking my computer away from me when I’m typing at three a.m. Seriously. After you hid my e-reader, I have to be honest, I was concerned. But thankfully, you’ve been so awesome during this journey of deadlines and insane moments. You are my hero—always. You are the man I write in every story. Perfection. I love you with my whole heart. Thanks for not just being a husband but a partner, not just a lover but a best friend. I owe you everything because you’ve given me everything.

And finally to the rest of my family. Thanks for believing in me! Liza Tice, Laura Heritage, Kristin Van Dyken, Julie Sherwood, and Tiffany Davis. My beta readers and original people who read the start of this series and believed in it. I love you guys.

“Jake! Catch me, catch me!” Char yelled as she did the trust fall at Junior High camp. She’d had a crush on Jake for years. Now that she was leaving eighth grade and starting high school in the autumn, things were looking up. With her legs shaved, new pink lip gloss, and high ponytail, she knew she looked good and Jake was just about to know how good when she fell into his arms—literally.

“Um, sure,” Jake called from behind her. “I’m almost ready.”

The wind whipped at her back as Char planked and fell the few feet backward. But she kept falling; nothing was there to catch her. She hit the grass with a thud and looked up.

Amy Stevens was twirling her hair between her fingers and laughing at something Jake was saying. The guy had the attention span of an ant.

“You jerk!” Char hit the ground next to her with her fist. “Jake? We’re partners and it’s called a trust fall for a reason. You’re supposed to catch me!”

His eyes widened. “Oh crap, I’m sorry, Char. Amy here needed help with the directions and doesn’t have a partner so I told her she could join us.”

“Wow, Jake, good thing I offered to be your partner. It’s going to take two of us to catch that girl. She’s like a swollen whale.” Amy laughed and nudged Jake, causing Char’s stomach to plummet to her feet. She knew she wasn’t as skinny as Amy or the other girls. She self-consciously licked her lips as the pain of rejection washed over her. Tears choked the back of her throat as the silence grew longer.

Char looked at Jake. His cheeks reddened a bit, but he didn’t say anything. He didn’t defend her. He did nothing.

Maybe that was the worst part.

He could have joined in and laughed, which at least would cause Char to get angry enough to punch him in the face. But instead he looked at her with pity—as if what Amy said was true.

As if he believed it, too, but didn’t know how to tell her.

Char looked down at the itchy grass as tears welled in her eyes.

“Hey, you guys ready for the trust fall?” Kacey, her best friend, walked up to them and smiled, making Char feel even more insecure. The only girl Jake ever confided in was Kacey. Char and Jake shared a best friend, which really sucked if you asked her; it meant she was always the third wheel, the awkward misfit toy that didn’t ever truly fit.

Jake pulled her in for a hug. “We were just warming up.”

“Cool.” Kacey looked down at Char. “Come on! Stop being so lazy and laying around.”

Amy burst out laughing. “Exercise, Char. Know what that is?”

Kacey glared at Amy and held out her hand to Char. “Ignore her. She’s just grumpy because your boobs are bigger than hers.”

Rolling her eyes, Char got to her feet and took one last look at Jake. She was done crushing on him. Absolutely finished. After all, what girl wants to fall in love with a boy who doesn’t come to her rescue when she needs it most?

She wanted a man, like the ones she saw in movies and on TV. A true hero would have saved her. Real men fought with guns and swords over the women they loved. Last year when the class had watched Romeo and Juliet—Char had had to hide the tears that streamed down her face over the ending scene. That’s what she wanted: a man who was so in love with her he’d follow her into the next life. When she’d said that exact thing out loud, Jake looked at her like she’d lost her mind. Well, the joke would be on him in the end. She would find her leading man and Jake Titus could just… die for all she cared.

“Grandma, what the hell are you doing?” Jake took in her two larger-than-life suitcases, giant pink Coach handbag, and what looked like a dead animal on her head, and cursed again.

“Language, Jake.” Grandma Nadine squared her shoulders and pushed past him to the ticket counter.

Oh no. Oh, hell no. Merciful God above. Jake looked around for Aileen, his latest conquest and plus one for the engagement party for his brother Travis.

“Yes, I need only a one-way ticket,” Grandma announced loudly to the Alaska Airlines clerk at the kiosk. Jake watched with a mixture of horror and panic as his grandmother bought a ticket on the same flight as him. Please let her credit card be declined; please, please.

“Here you go!” The evil lady handed over a boarding pass and smiled at Grandma. Jake glared at the woman and then at his grandmother.

“No.” He shook his head when she approached him, all smiles. “You aren’t coming.” He crossed his arms and stood his ground.

“I am.” Grandma waved her ticket in front of his face and smiled. “Now, get my bags.”

“Jakey?” Aileen strutted toward him. With a skirt shorter than what should be allowed in any public place, let alone an airport, she fluffed her hair and walked next to his side. Her bleached blond hair was held up by at least two cans of hairspray, and by the looks of her inability to walk in a straight line, she was still drunk from yesterday.

Grandma smiled brightly. “How lovely! It seems your whore has arrived.”

Jake groaned and covered his face with his hands. There was no way out of it. His grandmother was going to get him shot.

“Excuse me?” Aileen put her hands on her hips and did a weird head nod at Grandma, and nearly teetered off her high heels. Oh, this wasn’t good. Not good at all.

Grandma reached out and patted Aileen’s arm. “Sweetheart, I’m the one with hearing aids, not you. I called you a whore. Would you like me to spell it for you, too?” She nudged Jake. “What did you do? Find her at a high school career fair?” And then in a horrifyingly loud voice she began spelling. “W-H-O-R-E.”

Was his grandmother really spelling “whore” in an international airport? To his girlfriend? Sex buddy? What was she?

Shit, he didn’t even know her last name.

“Jake, I’m hungry. Take me to get food.” Grandma looped her arm in his and began pulling him, with more strength than an eighty-six-year-old woman ought to possess, toward security.

“But what about me?” Aileen pouted behind them.

Grandma stopped in her tracks and turned around. “Honey, I’m sure you can find another nice little plaything between now and the time your flight leaves. This one’s taken.”

Aileen snorted. “Didn’t take you for having that kind of taste.” This was directed at Jake. He opened his mouth to say, This is my grandma. Instead, Grandma smacked a large kiss on Jake’s cheek then pinched his ass.

“Oh, honey, you have no idea what this one is into.” She winked. Good God, she’d just winked and alluded to Jake as—he couldn’t even finish the thought. Horrified, he saw Aileen’s eyes widen. He opened his mouth to speak but was smacked on the ass again as his grandmother pulled him in the other direction.