Главная / Исторические любовные романы / The Temptation of the Night Jasmine 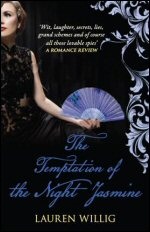 Лорен Уиллиг - The Temptation of the Night Jasmine краткое содержание

Willig spins another sultry spy tale in her fifth installment of the Pink Carnation series. When Robert, duke of Dovedale, returns after more than a decade abroad, Lady Charlotte Lansdowne hopes the romantic world of her novels will soon come to life in the form of a love story between her and Robert. But the duke has come back from India to track Arthur Wrothan, a spy who killed Robert’s mentor, and though his and Charlotte’s reunion culminates in a blaze of kisses, he abandons her to track down his nemesis. On the trail, Robert cavorts with the Hellfire Club, which holds opium-fueled orgies that provide cover for Wrothan. In the meantime, Charlotte’s efforts to help the king throw her again into Robert’s path. The story unfolds within the frame of a contemporary love affair between Eloise, a Harvard graduate student researching spies of the late 18th and early 19th century, and Colin Selwick, descendant of one of the spies who so pique Eloise’s interest. The author’s conflation of historical fact, quirky observations and nicely rendered romances results in an elegant and grandly entertaining book.

The Temptation of the Night Jasmine

For more reasons than will fit on this page

Not only was he three years late (an appearance on the eve of her first Season would have been much appreciated), but he appeared to have mislaid his armor somewhere. Instead of a silver breastplate, he was wrapped in a dark military cloak, the collar pulled up high against his chin. His steed was gray rather than white, dappled with dun where trotting on winter-wet roads had flung up patches of mud.

Charlotte noticed none of that. With the torchlight blazing off his uncovered head reflecting a seeming helmet of molten gold, he looked just like Sir William Lansdowne, the long-dead Dovedale who had fought so bravely at the Battle of Agincourt. At least, he looked just like what the seventeenth-century painter who had composed the murals along the Grand Staircase had imagined Sir William Lansdowne looked like.

As the visitor reined in his horse, Charlotte could hear the bugles cry in her head, the clatter of steel against steel as armored knights clashed, horses slipping and falling in the churned mess of mud and blood. She could see Sir William rise in his stirrups as the French bore down upon him, the Lansdowne pennant whipping bravely behind him as he cried, “A moi! A Lansdowne!”

Charlotte staggered forwards as something bumped into her from behind.

It wasn’t a French cavalry charge.

“Really, Charlotte,” demanded the aggrieved voice of her friend Penelope. “Do you intend to go out or just stand there all day?”

Without waiting for an answer, Penelope edged around her onto the vast swathe of marble that fronted the entrance to Girdings House, the principal residence of the Dukes of Dovedale. The basket Penelope was carrying for the purpose of collecting Christmas greenery scraped against Charlotte’s hip.

“Oh, visitors,” said Penelope without interest. “Shall we go?”

“Mm-hmm,” agreed Charlotte absently, without the slightest idea of what she was agreeing to.

The man in front of the house rose in his stirrups, but instead of shouting archaic battle cries, he took the far more mundane route of swinging off his horse and tossing the reins to a servant. He wore no spurs to jangle as he landed, just a pair of muddy boots that had not seen the ministrations of a valet for some time. Behind him, his friend did likewise.

It took her a moment to realize that Penelope had spoken. Considering the question, Charlotte shook her head. “I don’t think so.”

Given her tendency to go off into daydreams during introductions, she couldn’t be entirely sure, but she thought she would have recognized this man. His wasn’t the sort of face one forgot.

Shrugging, Penelope said, “Well, your grandmother will know. They must be more of the Eligibles.”

The Eligibles was Penelope’s careless catchall for the men Charlotte’s grandmother had invited to spend the Christmas season at Girdings. All were young — well, except for Lord Grimmlesby-Thorpe, who was closer to fifty than thirty, even if he did paint his cheeks and pad his pantaloons to provide the illusion of youth. All had the prospect of titles in their future. And all were in want of a dowry.

It was, in fact, all a bit like a fairy tale, with all the Princes in the land invited to vie for her hand. Or it might have been, if the group hadn’t tended more towards toads than Princes.

Tearing her eyes away from her knight without armor, Charlotte looked thoughtfully at her friend. “I don’t think they can be. Grandmama only invited ten, and they’ve all arrived.”

Penelope regarded the newcomers with somewhat more interest than she had shown before. Her face took on a speculative expression that Charlotte recognized all too well. She had last seen it right before Penelope had “borrowed” Percy Ponsonby’s perch phaeton and driven it straight into the Serpentine. The Serpentine had been an accident. The borrowing had not.

“Perhaps these are ineligibles, then. Let’s introduce ourselves, shall we?”

“Pen!” Charlotte grabbed at the edge of her cloak, but it was too late. Penelope was already descending the stairs, hips and basket swinging.

Since there was no way of stopping Penelope short of flinging herself at her and toppling them both down the stairs, Charlotte did what she always did. She followed along behind.

Pen paused two steps from the bottom, using the added height for good effect. With the torchlight flaming off her hair, she looked more like a Druid priestess than a minor baronet’s daughter. “Good evening, gentlemen,” she called across the divide. “What brings you this far from Bethlehem?”

The darker one, the one whom Charlotte hadn’t noticed, made a flourishing obeisance. “Following your star, fair lady. Is there any room at the inn?”

They did not, however, generally look right past Penelope, furrow their brow, and stare at Charlotte. They most certainly did not ignore Penelope altogether, take two steps forwards, hold out a hand, and say, “Charlotte?”

And, yet, that was precisely what Charlotte’s knight without armor did.

“Charlotte?” he asked again, with a bemused smile. “It is Cousin Charlotte, isn’t it?”

“Cousin” wasn’t quite the endearment she had been hoping for.

“Cousin?” Charlotte echoed. Although her grandmother claimed kinship with any number of peers and minor princes, the Dovedale family tree had run thin for successive generations. There were very few with any real right to call her by that name. “Cousin Robert?”

His eyes, brilliantly blue in his sun-browned face, crinkled at the corners as he smiled down at her. “None other,” said the long-absent Duke of Dovedale.

“Oh,” said Charlotte stupidly. What on earth did one say to someone who had disappeared well over a decade ago? “Hello?”

Somehow, that didn’t seem quite adequate, either.

“Hello,” her cousin said back, as though it seemed perfectly adequate to him.

“Cousin?” echoed Penelope, who didn’t like to be left out. “I wasn’t aware you had any.”

The connection was so tenuous as to make the term more a courtesy than an actuality. The Dovedale family tree had been a sparse one over the past few generations, sending the title scrambling back over branches and shimmying down collateral lines until it reached Robert, at the outermost fringe of the ducal canopy. Robert was, if Charlotte recalled the intricacies of her family tree correctly, the great-grandson of her great-grandfather’s half brother, having been the progeny of her great-great-grandfather’s much younger second wife. Her grandmother had been furious at the quirk of fate that had sent the title spiraling towards an all but unrelated branch, with a claim more tenuous than that of the Tudors to the Plantagenet throne, but formalities were formalities and courtesies were courtesies, so cousins they were, as long as they bore the Lansdowne name.

Charlotte looked from her cousin to Penelope and quickly back again, just to make sure he was still really there. He was. It seemed utterly impossible, but there he was, after — how many years had it been? Closer to twelve than ten.

She had been nine, a silent child in a silent house, still in mourning for her mother, watching helplessly as her father lay dying in state in the great ducal bedchamber, a wax figure on a field of crimson and gold. Terrified of the sharp-tongued grandmother who had snatched her up like the witch out of one of the tales her mother used to tell her, shivering with loneliness in the great marble halls of Girdings, Charlotte had been numb with grief and confusion.

And then Cousin Robert had appeared.

He had must have been fifteen, but to Charlotte, he had seemed impossibly grown-up, as tall and golden as the illustration of Sir Gawain in her favorite storybook. She had shrunk shyly out of the way (she had got used to staying out of the way by then, after nine months at Girdings), a book clasped in front of her like a shield, but her big, handsome cousin had hunkered down on one knee and said, in just that way, “Hello, Cousin Charlotte. You are Cousin Charlotte, aren’t you?” and Charlotte had lost her nine-year-old heart.

He didn’t look the same. He was still considerably taller than she was — that much hadn’t changed — but his face was thinner, and there were lines in it that hadn’t been there before. The healthy, red-cheeked English complexion she remembered had been burnt brown by harsher suns than theirs. That same sun had bleached his dark blond hair, which had once been nearly the same shade as hers, with streaks of pale gilt.

But when he smiled, he was unmistakably the same man. The very stone of Girdings seemed to glow with it.

“Yes,” Charlotte said as a dizzy smile spread itself across her face. “This is my cousin.”

“I wish my cousins greeted me like that,” groused the dark-haired man, his eyes still on Penelope, who didn’t pay him any notice at all.

“Happy Christmas, Cousin Charlotte,” her cousin said, her hand still held lightly in his. It felt quite comfortable there. Giving her hand a brief squeeze, he relinquished it. Charlotte could feel the ghost of the pressure straight through her glove.