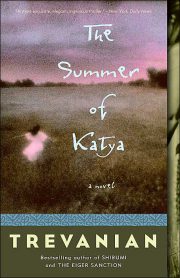 In the quiet Basque countryside in 1914, Jean-Marc Montjean, a handsome young doctor, is bewitched by the seductive, beautiful Katya. He is driven to know everything about her. He is devastated by the unspeakable secret horror buried in her past.

The Summer of Katya

Every writer who has dealt with that last summer before the Great War has felt compelled to comment on the uncommon perfection of the weather: the endless days of ardent blue skies across which fair-weather clouds toiled lazily, the long lavender evenings freshened by soft breezes, the early mornings of birdsong and slanting yellow sunlight. From Italy to Scotland, from Berlin to the valleys of my native Basse Pyrйnйes, all of Europe shared an exceptional period of clear, delicious weather. It was the last thing they were to share for four terrible years—save for the mud and agony, hate and death of the war that marked the boundary between the nineteenth and twentieth centuries, between the Age of Grace and the Era of Efficiency.

Many who have described that summer claim to have sensed something ominous and terminal in the very excellence of the season, a last flaring up of the guttering candle, a Hellenistic burst of desperate exuberance before the death of a civilization, a final, almost hysterical, moment of laughter and joy for the young men who were to die in the trenches. I confess that my own memory of that last July, assisted to a modest degree by notes and sketches in my journal, carries no hint that I viewed the exquisite weather as an ironic jest of Fate. Perhaps I was insensitive to the omens, young as I was, filled with the juices of life, and poised eagerly on the threshold of my medical career.

These last words provoke a wry smile, as only the conventions of language allow me to describe the quarter century I have passed as a bachelor doctor in a small Basque village as a “medical career.” To be sure, the bright hardworking young man that I was had every reason to hope he was on the first step of a journey to professional success, although he might have drawn some hint of a more limited future from the humiliatingly trivial tasks he was assigned by his sponsor and patron, Doctor Hippolyte Gros, who emphasized his assistant’s subordinate position in dozens of ways, both subtle and bold, not the least effective of which was reminding patients that I was indeed a full-fledged doctor, despite my apparent youth and palpable lack of experience.

“Doctor Montjean will attend to writing out your prescription,” he would tell a patient with a benevolent smile. “You may have every confidence in him. Oh, the ink may still be wet on his certificate, but he is well versed in all the most modern approaches to healing, both of body and mind.” This last gibe was aimed at my fascination with the then new and largely mistrusted work of Doctor Freud and his followers. Doctor Gros would pat the hand of his patient (all of whom were women of a certain age, as he specialized in the “discomforts” associated with menopause) and assure her that he was honored to have an assistant who had studied in Paris. The widened eyes and tone of awe with which he said Paris were designed to suggest, in broad burlesque, that a simple provincial doctor, such as he, felt obliged to be humble before a brilliant young man from the capital who had everything to recommend him—save perhaps experience, compassion, wisdom, understanding, and success.

Lest I create too unflattering a portrait of Doctor Gros, let me admit that it was kind of him to invite me to be his summer assistant, as I was fresh out of medical school, penniless, without any prospects for purchasing a practice, and burdened by a most uncomplimentary report of my year of internship at the mental institution of Passy. However, far from showing Doctor Gros the gratitude he had a right to expect, I courted his displeasure by confessing to him that I considered his area of specialization to be founded on old wives’ tales, and his profitable summer clinic to be little more than a luxury resort for women with more leisure than common sense. In sharing these observations with him, I am sure I believed myself to be admirably open and honest for, with the callous assurance of youth, I often mistook insensitivity for frankness. It is little wonder that he occasionally retaliated against my callow self-confidence with thrusts at my inexperience and my peculiar absorption with the darker workings of the mind.

Indeed, one day in the clinic when I had been holding forth on the ethical parallels between withholding treatment from the sick and giving it to the healthy, he said to me, “You have no doubt wondered, Montjean, why I chose you to assist me this summer. Possibly you came to the conclusion that I was staggered by your academic accomplishments and impressed by the altruism revealed by your year of unpaid service at Passy. Well, there was some of that, to be sure. Then too, there was the fact that you were born in this part of France, and your dark Basque good looks are an asset to a clinic catering to women of a certain age and uncertain appetites. After all, having a Basque boy fiddle with their bits lends to the local color. But foremost among your qualities was your willingness to work cheap, which I admired because humility is an attractive and rare quality in a young doctor. However, little by little, I am coming to the view that what I mistook for humility was, in fact, an accurate evaluation of your worth.”

And, the truth be told, I wasn’t of all that much value to him, as there was not really enough work at the clinic to occupy two doctors. My principal worth was as insurance against his falling ill for a day or two, and as freedom for him to take the occasional day off—days he implied were devoted to romantic preoccupations. For Doctor Gros had something of a reputation as a rake and a devil with the women who were his patients. He never boasted openly of his conquests to the worthies of Salies who were his companions over a few glasses each evening in one of the arcade cafйs around the central square. Instead he relied on the silent smile, the shrug, the weak gesture of protest, to establish his reputation, not only as a romancer of potency, but as a man possessed of great discretion and a finely tuned sense of honor.

Nor did Doctor Gros’s particularly advantageous position in the stream of sexual opportunity engender the jealousy one might have expected among his peers, for he was protected from their envy by a fully deserved reputation as the ugliest man in Gascony, perhaps in all of France. His was a uniquely thoroughgoing ugliness embracing both broad plan and minute detail, an ugliness the total of which was greater than the sum of the parts, an ugliness to which each feature contributed its bit, from the bulbous veiny nose, to the blotched and pitted complexion, well warted and stained, to the slack meaty mouth, to the flapping wattles, to the gnarled, irregular ears, to the undershot chin overbalanced by a beetling brow. Only his eyes, glittering and intelligent within their sunken, rheumy sockets, escaped the general aesthetic holocaust. But withal there was a peculiar attraction to his face, a fascination at the abandon with which Nature can embrace ruin, that lured one’s glance again and again to his features only to have the gaze deflected by self-consciousness.

Doctor Gros was by far the wittiest and best-educated man in Salies, but the audience for his pompous, rather purple style of monologue were the dull-minded men who controlled the spa community: the owners of the hotel-restaurants, the manager of the casino, the village lawyer, the banker, all of whom felt a certain reluctant debt to the doctor, for it was his clinic that was the principal attraction for the summer tourist/patients who were the economic foundation of the town. Still—even though Profit occupies so dominant a position in the moral order of the French bourgeois mentality that vague impulses towards fair play and decency are easily held in rein—it is possible that the more prudish of Salies’s merchants might have found Doctor Gros’s cavalier treatment of the lady patients offensive, had these pampered, well-to-do women been genuinely ill. But in fact they were robust middle-class specimens whose only physical distress was having attained an age at which fashionable society allowed them to flap and flutter over “women’s problems,” the clinical details of which they whispered to one another with that appalled delectation later generations would reserve for sex. So it was that I alone found Doctor Gros’s sexual hinting and double entendres medically unethical and socially distasteful, a view that my youthful addiction to moral simplism required me to express. Looking back, I wonder that Doctor Gros put up with my self-assured censure at all, but the peculiar fact was that he rather seemed to like me, in a gruff sort of way. He took impish delight in outraging my tidy and compact sense of ethics. Also, I was in a position, by virtue of education, to catch his puns and comic images that went over the heads of his merchant-minded cronies. But I believe the principal reason he was fond of me was nostalgic egotism: he saw in me, in both my ambitions and limitations, the young man he had been before time and fate reduced his brilliance to mere table wit, and eroded the scope of his aspirations to the dimensions of a profitable small-town clinic.

Perhaps this is why his reaction to my attitude of moral superiority was limited to giving me only the most trivial tasks to perform. And, in fact, I was not all that distressed at being relegated to the role of an elevated pharmacist, for I had just finished years of grinding work and study that had drained mind and body and was in need of a lazy summer with time on my hands, with freedom to wander through the quaint, slightly shoddy resort village or to loaf on the banks of the sparkling Gave, overarched by ancient trees and charming stone bridges. I wanted time to rest, to dream, to write.