Главная / Исторические любовные романы / The Seduction of the Crimson Rose 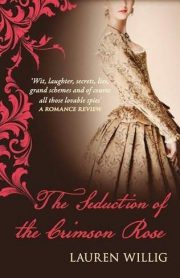 Лорен Уиллиг - The Seduction of the Crimson Rose краткое содержание

The fourth installment in Willig’s Pink Carnation series finds beautiful, ambitious Mary Allsworthy still smarting from her sister Letty’s inadvertent theft of her suitor in The Deception of the Emerald Ring (2007). At the suggestion of the Pink Carnation, the imperious Lord Vaughn recruits Mary to help him uncover the identity of the Black Tulip, a French spy who threatens England’s interests. As determined as Mary is to find a husband, Lord Vaughn, a widower, is equally determined not to succumb to her charms, creating a palpable friction between the two. The closer they get to their goal of finding the Black Tulip, the more their adversarial feelings dissolve into attraction, even love, just as a secret from Vaughn’s past threatens to keep them apart forever. In the present, graduate student Eloise Kelly delves deeper into the archival papers to discover the Black Tulip’s identity. Willig’s series gets better with each addition, and her latest is filled with swashbuckling fun, romance, and intrigue.

The Seduction of the Crimson Rose

Setting the standard for best friends since 1982

I don't know what possessed me to believe that starting a new book and a new job at the same time would be a good idea. Demons, most likely. Many thanks go to my editor, Kara, and all the folks at Dutton who waited patiently for delayed installments of the manuscript; to my parents, who made sure I had groceries to eat and a table to rest them on and even volunteered to put on a blond wig and pretend to be me at work; to Brooke, who put up with more Mary and Vaughn than anyone not writing about them ought; to Nancy, Claudia, Abby, Liz, and Jenny, who talked me down off a variety of tree limbs; and to my friends and colleagues at Cravath, who kept their senses of humor — and by extension, mine — through cite checks, doc reviews, and assorted fire drills. Big hugs go to Emily, Alexi, Sarah, and the 12:30 lunch group. Thanks, guys. I don't know why you put up with me, but I'm glad you do.

For such a big man, Hercules had a surprisingly high-pitched voice. It took me a moment to realize that it wasn't actually a piece of classical statuary demanding the contents of my wallet, but a very human-size woman seated at a small desk at its base. When you're confronted by a twice-larger-than-life statue of Hercules, wielding a club and wearing little more than a strategically draped serpent, you tend not to notice much else.

To be fair, it wasn't all Hercules' fault. I had spent the morning in a state of utter uselessness, nearly gotten run over by a cab on my way to the archives, and given a pair of confused German tourists directions to Westminster Abbey when what they wanted was Kensington Palace.

The cause of all this chaos and confusion? I had a date. A real, live date with a real, live boy.

If this doesn't seem exactly stop-the-presses sort of stuff, then you've clearly never experienced the soul-sucking self-doubt that comes of a year without so much as an attempted grope. And the boy in question…Think a blond Hugh Grant without the sketchy past, or Errol Flynn without the tights. Unlike my other exes (and most Robin Hoods), he actually spoke with an English accent. Which made sense, because he was English, born and bred on the scepter'd isle, as British as HP Sauce, crooked teeth, and the Queen Mum's hat collection. What single Anglophile of a certain age wouldn't be smitten?

In my own defense, I hadn't come to England looking for romance. As a fifth-year graduate student with an increasingly angsty dissertation advisor and a research grant that didn't quite pay my rent, I didn't have time for men — at least not live ones. Unfortunately, the dead ones could be just as frustrating as the live ones. After three months hunched over a desk in the British Library Manuscript Room, three months of endless train rides to obscure county records offices, three months of assuring my advisor that, yes, everything was going just brilliantly and of course I would have a chapter for him by January, by November I had still been no closer to my goal: the unmasking of the Pink Carnation, the flowery spy whose very existence gave Napoleon an intense allergic reaction.

The fact that a whole legion of intensely interested nineteenth-century French agents, as well as several successive generations of scholars, had also failed ought to have clued me in.

But when has that ever stopped anyone? It's like the search for the mines of Solomon or the Lost City of Gold; that no one else has found it before just adds to the challenge. I'm sure the men who perished in the jungles of Mexico didn't say, "Oooh, let's go die on a hopeless quest!" No, they dreamed of coming home draped in gold and covered with glory. My goal wasn't gold but footnotes, the coin of the scholarly realm. Otherwise the impetus was the same. The fact that many scholars smugly insisted that the Pink Carnation had never existed in the first place, that he was an imaginary folk hero invented to sell papers, or a sort of shadow puppet invented by the War Office in the hopes of scaring Napoleon, only spurred me on. I'd show them.

Or not. For a while, it was beginning to look like not.

But every now and again, once in a hundred years, despite all the nay-saying and the accumulated weight of scholarly truths, someone gets lucky. This time, it was me. I don't know what it was that made Mrs. Selwick-Alderly decide to allow me access to a cache of family papers never before open to the public. Perhaps I reminded her of a long-lost daughter. Or she might simply have taken pity on me for my pathetic and bedraggled air (I'm frequently bedraggled, and after three months of fruitless dissertation research, I was feeling pretty darn pathetic). Whatever the cause, in her cozy sitting room, I had found not only the secret identity of the Pink Carnation, but something more, something that came in a tall, blond, and, at that point in time, very irate package.

That's where Colin came in.

Ah, Colin. I was staring happily into space, contemplating the wonder that was Colin, when an annoying, squawking noise permeated my reverie.

"Four pounds," the receptionist repeated, clearly taking my blank stare for either a linguistic barrier or just chronic stupidity.

"Huh?" I said brilliantly, still mentally wandering hand in hand with Colin in a Technicolor wonderland complete with dancing munchkins. I was wearing a floaty frock that flitted daintily about my knees as Colin swung me in a happy circle beneath the cerulean sky. All that was missing was Dick Van Dyke, although, given the look in Colin's eye, Dick would have been decidedly superfluous.

Still tap-dancing through daydream, I favored the receptionist with a big, beaming smile.

"Oh, I'm not here for the museum," I said brightly, confirming her impression that a village somewhere back in the States was missing its idiot. "I'm here for the Vaughn Collection."

"This is the Vaughn Collection."

I knew I should have had that extra cup of coffee before leaving my flat. I thought of pretending that I didn't speak English, but it was a little too late for that.

"Sorry," I said, with that super-ingratiating smile that works on Americans but falls flat in the British Isles, "I didn't mean the art collection. I meant the documentary collection — the archives. I spoke to your archivist?"

I'm not sure why it came out as a question. After all, if I didn't know whether I'd spoken to the archivist, she surely wouldn't know, either. From the look on the receptionist's face, she seemed to share this opinion.

Trying a different tack, I said, more assertively, "I was told the archives were open between one and six on Saturdays."

Dismissing me as a bad job, the receptionist jerked her head to the right. "Straight through down the stairs at the back if you want to see the museum it'll be four pounds." The fact that she said this without pausing to draw breath rendered the performance even more impressive.

This earned me another fishy stare. Deeming it wiser to quit while I was ahead, I hoisted my bag higher on my shoulder and headed in the direction the receptionist had indicated. The caryatids arrayed on either side of the door looked down on my brown wool pants and baggy green Barbour jacket with a decided sneer. I don't know what they were so supercilious about; their marble draperies were a good two thousand years out of fashion.

Dotted with little glass cases, the room beyond must have been a ballroom or something equally grand once upon a time, when Vaughn House was still inhabited by genuine Vaughns rather than the remnants of their art collection and a scraggle of hardcore art historians and scruffy tourists. You could have fit five of my flat into it and still had room for a good-size coffee shop.

With a fine disregard for atmosphere, the curators had plunked a series of glass and chrome display cases throughout the room, each containing a motley collection of personal effects of long-deceased Vaughns. In the largest case, in the very center of the room, the curators had displayed the pièce de résistance, an impressive collection of Edwardian underwear, from lace-edged drawers large enough to swathe the backside of a baby elephant to a pair of stays that looked like they might have been used to tow the Queen Mary back into port. Next to them, the curators had helpfully positioned a sepia photograph of a formidable dowager with a waist cinched into nothingness and a bosom that could smother a small city.

With four months of fish and chips weighing heavily on my midriff, I cast a speculative eye over the stays. Unfortunately, I didn't think they would fit under my going-out pants, which were designed for something a bit lighter in the way of undergarments. I wondered what the curators of museums would be displaying a hundred years hence. Would we have glass cases filled with fire-engine-red thongs and leopard-print bras, along with a carefully printed white card explaining their sociocultural significance?

The gentleman who occupied the better part of one wall seemed to share my qualms. His gaze was fixed upon the underwear display with a decidedly jaundiced air. He had been painted, according to the conceit of the time, in a classical wasteland, with a broken pillar wedged beneath one elbow and vague suggestions of a decaying Roman temple in the background. It was an evening scene, in which the rich black brocade of his coat would have blended with the deep indigo of the night sky if not for the silver threads that ran through the weave like condensed moonlight. The entire ensemble had a supernatural shimmer reminiscent of old-fashioned ghost stories featuring family phantoms.