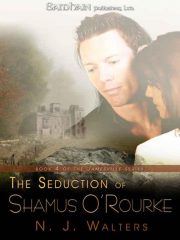 All small towns have secrets. This one could be deadly. After her father’s death, Cyndi Marks returns to Jamesville, determined to settle here and lay the ghosts of years ago to rest once and for all. But the past has a way of catching upand hanging on. When her car breaks down outside of town, a handsome stranger stops to help. He intrigues and attracts her, but then she discovers who he is. Shamus O’Rourke enjoys his job, his family and small town living. What he’s missing is someone with whom to share it. Immediately drawn to Cyndi, he is determined to get closer to her, even as he senses her pulling away. But not everyone in Jamesville is happy to see Cyndi. People are hiding secrets. Secrets they would kill to protect. When violence erupts in her home, Cyndi turns to the only person in town she can trustShamus. In a situation where family loyalties are strained, Cyndi’s life is threatened and everyone is a suspect, will their emerging love survive?

The Seduction of Shamus O'Rourke

Thank you to my loving husband, Gerard. Your continued support and love means more than I can say.

Thank you to Charlene Teglia for your moral support, keen eye, and good old-fashioned common sense. Your friendship means a lot to me.

Thank you to my amazing editor, Heidi, for your hard work and encouragement.

"Not now. Not now,” Cyndi Marks muttered as she maneuvered her usually reliable Honda over to the shoulder of the road. Although, to be fair, it wasn't the car's fault that she had a flat tire. But that didn't keep her from swearing under her breath.

When the car finally rolled to a halt, she put it in park and sat there in the driver's seat with her hands still curled around the wheel. She so did not need this. Sighing, she released the wheel, turned off the ignition, and yanked out the keys. Sitting here wishing that it hadn't happened wouldn't change the facts. She still needed to deal with her flat tire. Unfortunately, the jack and the spare were in the trunk, buried beneath her luggage.

Tipping her head back, she leaned against the headrest and took a deep breath. The keys dug into her palms, she clutched them so tight. Aunt Verna had told her this wouldn't be easy. The older woman had even offered to make the trip with her, but Cyndi had declined. She'd needed to face the past on her own.

She knew if she flipped open her cell phone and called, Verna Marks Mitchell would be there within hours. Her aunt had been a surrogate mother to her and, even more, she'd given Cyndi hope when she hadn't had any herself.

Shaking off her melancholy, she opened the car door and stepped out onto the pavement. Immediately, the crisp, fall air filled her lungs. Scanning the area, she realized she was perched on top of a hill overlooking the town.

Jamesville, Maine. It looked so peaceful nestled down in the valley below, but Cyndi knew that even a small town had dirty little secrets. Turning her back on the picturesque scene, she strode to the trunk of her car. She needed to keep focused on the task at hand and right now that included getting her car back on the road so she could reach her destination before dark.

The sun was low in the afternoon sky, but she had an hour or so until it finally sank. Lots of time to change a flat tire and get to the lawyer's office before it closed for the day.

Unlocking her trunk, she pocketed her keys and hauled out her two suitcases, setting them beside the car. Next came her laptop, which she tucked into the backseat for safekeeping. Two boxes containing her pillows and comforter, specialty teas, and her favorite snacks were next. She figured she'd need all the comforts she could get. She was under no illusion that the task ahead of her would be easy.

Cyndi ignored the small voice in the back of her head that whispered she didn't have to stay. She'd made her decision and she wasn't about to back down now. It was time for her to face down the demons of her past and put them to rest once and for all. The only way to do that was to settle in Jamesville. She'd put all her belongings in storage, let the lease on her apartment lapse, and quit her job as manager of an upscale bed and breakfast. For better or worse, she was here to stay.

Dragging out the jack and the spare tire, she carried them one at a time to the front of the car. The left-hand tire was as flat as a pancake. She must have picked up a nail or something. As soon as she hit town, she'd have to go to a garage and get it seen to.

As she was shoving the jack beneath the car, she heard another vehicle rumbling up behind her. She scooted in front of her car, not wanting to be out in the road as the other vehicle passed. She'd pulled her car as far off the road as she could, but the shoulder wasn't that wide and part of the vehicle was still on the pavement. A dusty, blue truck passed her, but the brake lights flashed almost immediately, and the vehicle rolled to a stop several yards up the road.

Cyndi climbed back into the driver's seat and locked all the doors. Maybe she was overreacting, but a woman on her own, on a fairly deserted stretch of road, couldn't be too careful. She knew what Jamesville used to be like, but that was a long time ago. The whole world seemed to have changed in the intervening years.

The truck door opened and a long, jean-clad leg came into view, quickly followed by another. The man who got out of the vehicle was huge, standing at least several inches over six feet. His shoulders were wide, straining the seams of his dirty, white T-shirt. The short sleeves of the shirt did nothing to hide his thick biceps and muscular forearms. His jeans were faded white at the knees and crotch area. Cyndi forced herself to look away. A stranger was coming toward her, and she was staring at his crotch. It had to be the stress she'd been under making her so loopy. Still, she did enjoy the view.

His large, booted feet quickly ate up the distance between them. Cyndi reached into her purse and yanked out her phone, ready to call for help if necessary.

The man stopped beside her door, leaned down and tapped on the window. “Didn't mean to frighten you, ma'am."

Cyndi got her first, really good look at his face and it started her heart pounding, but not from fear. The man was gorgeous, in a rough sort of way. His thick, molasses-brown hair was tied back at the nape, falling just below his shoulders. His face was all sharp angles and planes; his nose was large, but somehow suited his face. Eyebrows the same color as his hair were straight slashes above a pair of concerned, blue-gray eyes, eyes the same color as the sky just before a storm.

"Ma'am?” She heard his voice through the glass and realized she was sitting there like a fool simply staring at him.

Quickly she rolled the window down, but just a crack. “I'm sorry. What did you say?"

He tilted his head to one side, staring at her. Cyndi knew she looked a mess. She'd been traveling for hours, and the past few weeks had been extremely stressful. She knew she had dark circles under her eyes and wasn't wearing any makeup, save her clear lip balm. Her days of dressing to please other people were long over.

"I said that I didn't mean to frighten you.” He smiled then, a slight upturn of the corners of his mouth, but the effect was devastating.

Butterflies danced in her stomach and she felt a throbbing between her thighs. She shook her head, desperately trying to fight the unwanted burst of physical attraction. She was thirty-nine years old, for heaven's sake, long past the stage of being ruled by her hormones. And he looked to be at least ten years younger than her.

"A woman alone can't be too careful these days.” His words echoed her earlier thoughts. “You stay put in the car and I'll take care of that flat tire for you."

"No,” she snapped. Realizing what she'd done, she softened her tone. After all, it wasn't his fault she was attracted to him. All he'd done was stop and offer to help. “That's fine. I'll take care of it myself."

He scrubbed his hand across his jaw and her eyes followed the action. She could see the five o'clock shadow on his chin. It made him appear even sexier, if that was possible. There was something elemental about this man. Even dressed in old work boots, faded jeans and a dirty T-shirt, there was an air of barely restrained power about him.

"I figured you could handle the problem on your own, ma'am, but there's no need for that now that I'm here."

Was he for real?

She guessed so when he turned on his heel and crouched down by the front tire. Within seconds, the front of the car was raised and he was using the tire iron to loosen the lug nuts.

Cyndi laid her cell phone on the seat beside her and rolled down her window, not quite willing to leave the dubious safety of the confines of the car. The man was big and strong enough that if he meant her harm, he'd certainly be able to get to her with little effort. Her instincts told her he was exactly what he claimed to be—a Good Samaritan. But she still wasn't taking any chances.

"You visiting someone around here or just passing through?” His voice jolted her. She hadn't realized he was paying any attention to her, as he seemed totally focused on his task.

"I...ah...I have business in Jamesville.” That was the truth, but not the entire truth.

"That so?” He yanked off the flat tire and grabbed the spare, popping it on quickly. “You going to be here long?"

That was the same question she'd been asking herself for the past few weeks since she'd first gotten the news that had ultimately brought her here. “Yes.” Determination filled her. She'd promised herself that she would free herself from the past once and for all.

He glanced up, his stormy eyes capturing her gaze. “I thought you could buy me a cup of coffee and maybe a piece of pie to say thanks.” When he grinned, she could see a dimple in his left cheek. The man was outrageous, but he made her smile. She could feel her lips parting, the corners turning upward, as she shook her head. “Now don't answer too quickly,” he drawled. “You might hurt my feelings."

The man was flirting with her. She laughed and leaned her arm on the window, staring at him. He certainly wasn't hard on the eyes. Crouched down like he was, the faded material of his jeans outlined the muscles of his thighs. His biceps rippled as he spun the tire iron, tightening the lug nuts on the spare.