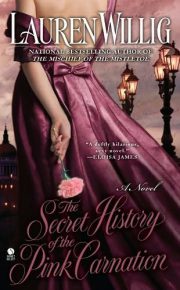 The French eventually unmasked the Scarlet Pimpernel and the Purple Gentian, famed spies in the Napoleonic wars, but as Harvard graduate student Eloise Kelly discovers at the start of this breezy historical romance, the identity of the Pink Carnation remains a mystery. Working in London on her history dissertation, Eloise gets access to a trunk of papers and documents from the early 19th century. She dives into this treasure trove, and suddenly the reader is plunged into a novel within a novel, told from the viewpoint of Amy Balcourt. Amy, exiled to rural England with her mother, now wants to avenge, with the help of her cousin Jane, her father’s death at the hands of the French. She hopes to be in league with the Scarlet Pimpernel, who heroically tried to save her father. Willig, a Harvard graduate student herself, does a good job painting a picture of the tumultuous era. She also makes the sparks fly between Amy and the Purple Gentian, a dashing English nobleman in charge of Egyptian antiquities for Bonaparte. But when the Pink Carnation’s identity is finally revealed after many obvious clues, the reader wonders why it took Eloise so long to get it. More critically, Eloise’s appearances come to seem like awkward intrusions into Amy’s — and the Pink Carnation’s — more intriguing story.

If I had to narrow it down to a crucial few, I would say that my imagination was molded by a combination of Alexandre Dumas, Margaret Mitchell, and Judith McNaught. I dashed down narrow alleyways with d’Artagnan, ran blockades with Rhett Butler, and exchanged quips with supercilious heroes in Regency ballrooms. But my stylistic sensibilities were shaped in the school of L. M. Montgomery, Nancy Mitford, and Elizabeth Peters, who, despite writing in completely different genres, all have a knack for an ironic turn of phrase and a winning way of highlighting life’s absurdities. When Judith Merkle Riley’s A Vision of Light came out, followed by Diana Gabaldon’s Outlander, it was the best possible combination of both tendencies: vivid historical scenes presented with a wry twist.

Q. What was the most difficult or frustrating part of the writing process?

A. It’s hard to pick just one. I’d have to go with those days when I sit down at the computer, and no one’s there. My characters are all out to lunch. Even the villain can’t be rousted out of his bed to do anything dastardly. I sit and scowl at the screen, drink ludicrous amounts of tea, check e-mail every three minutes, and generally work myself into a snit. The English language becomes an unfamiliar wilderness and words, with all the recalcitrance of a herd of stubborn sheep, refuse to allow themselves to be arranged into any semblance of coherence. And then, on the flip side, there are those days when the characters are jumping up and down in my head, shouting, “Pay attention to me!” and fluid lines of perfect prose are unrolling through my head—but I can’t act on any of it, because there’s something else I have to do, like grade student papers, or it’s four in the morning and I’ve already turned my computer off. Having learned from past experience that such moments are fleeting, I try to always keep paper and pen somewhere in the vicinity so I can catch at least a fraction of those fragments of narrative and dialogue before they scuttle away again. Of course, those instances—both sets of them—are more than outweighed by those glorious moments when the characters frolic across the page, doing all sorts of wonderful things I never expected them to do.

Q. Will Eloise and Colin’s story continue into the next book?

A. Although Eloise and Colin’s story continues, the next book, The Masque of the Black Tulip, belongs to Henrietta Selwick and Miles Dorrington, the Purple Gentian’s little sister and best friend. When Eloise follows Colin back to Selwick Hall to plunder the family archives, she discovers that there’s a new French spy on the loose: the Black Tulip. (My apologies to Alexandre Dumas for stealing the name!) The Black Tulip is under orders to find and eliminate the Pink Carnation—which means, naturally, that someone will have to find and eliminate the Black Tulip. And who better to do so than Miles? Of course, Henrietta, the girl whose earliest words were “me, too!” insists on pursuing her own investigations. As I was writing The Secret History of the Pink Carnation, it became gloriously clear that Henrietta and Miles were perfectly suited—and equally clear that they were sure to fight it every step of the way. I’m happy to say they have proved me right on both counts.

Q. When will Jane get her own book?

A. I’m not sure how much I should give away . . . but the short answer to that is, not for a while yet. One of the constraints of working in the early nineteenth century is that heroines tend to marry young, much younger than suits our modern sensibilities. If they don’t, the author is forced to engage in alarming contortions to explain why the heroine has been left on the shelf for so long—forced to take care of the family estates, without the money to afford a Season, kidnapped by bandits and locked in a box till after she turned twenty-one, and so on. An interesting trend recently has been to have older, widowed heroines, where the age problem is dealt with by the expedient of an earlier marriage and a conveniently deceased husband. With Jane, however, this problem is moot. Jane has a wonderful reason for not marrying young: she’s too busy saving civilization from the depredations of Napoleon’s armies. I will say, however, that Jane does get her romance eventually, and I know exactly who it is—but that’s between me and Jane.