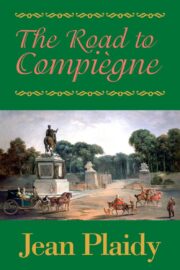 No longer the well-beloved, Louis XV is becoming ever more unpopular – the huge expense of his court and decades of costly warfare having taken their toll. As the discontent grows, Louis seeks refuge in his extravagances and his mistress, the powerful Marquise de Pompadour. Suspicions, plots and rivalry are rife as Louis’s daughters and lovers jostle for his attention and their own standing at Court. Ignoring the unrest in Paris, Louis continues to indulge in frivolities. But how long will Paris stay silent when the death of the Marquise de Pompadour leads to yet another mistress influencing the King?

When the bakers of Gonesse came into the city twice a week with their load of bread – which they must sell to the citizens as they were not allowed to take it back beyond the Barrier - they discussed the road with the peasants who were making their way to Les Halles, that great circular space with six busy streets leading into it. Extolling the qualities of good bread, of fish, meat and vegetables, they found time to discuss the road. The coffee-women standing at the street corners, their urns on their backs, called: ‘Café au lait, two sous the cup. Café au lait, with sugar, my friends!’ And while their customers stood by to drink from the earthenware cups, they would joke with the coffee-seller about the road.

The barbers, running frantically to keep their appointments, flourishing wigs and tongs, their clothes white with powder, called to each other the latest news of the road; the lawyers on their way to the Châtelet referred to it gravely; the clerks hurrying early to their work found time to whisper about it.

It was discussed by lords and ladies in their carriages, by the sweating passengers huddled together in the lumbering carrabas travelling back and forth between Paris and Versailles at the rate of about two miles an hour, and by those who, not being able to afford a carriage and despising the carrabas, must travel in those comic vehicles which Parisian humour had christened pots de chambre.

In the Palais Royal the prostitutes and the gallants introduced themselves by a comment on the road, while the agitators there made of it a subject for fierce controversy.

Men and women, cautiously picking their way through the streets to avoid the sulphurous mud, joked about it; those who halted by the Pont-Neuf for a brushing-down spoke of it with the valets of the streets.

The road to Compiègne, the Route de la Revolte, had caught the imagination of the people of Paris. It was a symbol between them and their King. It was the retort of Louis XV to the criticism of Paris. ‘You no longer call me Louis the Well-Beloved, so I have built a road to skirt your city. I shall never again come for pleasure to Paris, but only when my duties demand that I should do so.’

And the people of Paris laughed and sang about the road to Compiègne because they wanted their King to know that they could match his indifference with theirs – and show their hatred if need be.

The Marquise de Pompadour sat before her mirror and, while her maids dressed her hair and painted her face, received visitors in her apartment. It was the hour of the toilette when the most important lady of the Court was free to listen to the conversation of her visitors.

Graciously she smiled. With cheeks and lips carmined, with her hair piled high above a face which was piquant rather than beautiful, she was indeed attractive; but there were many among those who attended her toilette who declared that beneath the serenity and cosmetics was a jaded, weary and apprehensive woman. It seemed hardly possible, to those who saw her at this time, that this could be so. Yet all knew that the Marquise was a brilliant actress.

How gracious she was! Never, even towards the most humble, did she show anything but kind attention.

Her enemies whispered: ‘See how cautious she is! Is that because she knows that her power over Louis is diminishing?’

‘She must, if she is not a fool. And how could a woman, born plain Mademoiselle Poisson who has become the Marquise de Pompadour without the aid of friends at Court, be a fool?’

‘Does she not! Note the grim determination of that delicate jaw. Louis is exhausting her, and she knows it. She cannot last.’

The beautiful eyes of the Marquise were bland. It did not seem possible that she could be aware of the whisperings.

‘My mirror,’ she murmured to her woman; and she held it delicately and elegantly that she might view her face from every angle.

She smiled at the company. This one wanted a post at Court for himself, that one for his son. Here was a man who desired a command in the Army. Here was a woman who sought a place for her daughter. Here was a merchant who wished to sell her a beautiful vase; he knew the taste of the Marquise was perfect. Here was another with yards of beautiful satin in one of the delicate shades such as had become associated with her.

So to Madame de Pompadour they came, because the Marquise was charming and kind; it was her policy to make no enemies and to help where she could; and of course her word carried more weight than that of anyone else with the King.

‘For the moment!’ her enemies would whisper gleefully. ‘But wait. Let some bright young charmer appear. Remember de Mailly. The King was faithful to her for years. He would never have rid himself of her, even though he was tired of her. But when Madame de Mailly’s sister, Madame de Châteauroux, said, “Dismiss that woman from Court,” poor Madame de Mailly had to go.’

So would it be with the Marquise.

For the time being she remained because Louis had found no one who appealed to him sufficiently to make him want to replace her; but the time would come, and then: woe to the Pompadour.

Now she was smiling at a man who had asked for a command in the Army.

‘Monsieur,’ she was saying in her gracious way, ‘I feel sure that we shall be able to grant your request.’

We! She had the effrontery to use that word which linked her with the King. She did it continually. ‘We shall leave for Marly, Choisy, Fontainebleau.’ And she meant ‘the King and I’.

Louis heard and he did not protest. He was too lazy, too anxious to avoid unpleasantness. Yet everyone believed that the time would come when Madame la Marquise would be asked to leave Court.

She could not completely disguise the fact that she was an unhealthy woman; and a woman needed the vitality of ten to keep pace with Louis XV of France.

While they clustered about her the King arrived. Now they fell back, the men bowing low, the women sweeping the floor with their gowns, as Louis made his way to the toilette table.

The Marquise had risen, she curtsied with grace. Everyone was alert, but if Louis was tired of the Marquise he gave no sign of this. All must be aware of the brightening of his face as he took the hand of this charming woman and said: ‘Madame la Marquise, how are you this day? I wish to hear your news.’

He did not dismiss those who had assembled in the room, but the etiquette of the Château demanded that they retire at once. He had glanced neither to right nor to left as he had made his way to the Marquise, which meant that he expected to be immediately left with her.

When they were left alone the Marquise gazed at him tenderly. He was not looking well; there was a yellowish tinge on his skin which had not been there a few months ago. Still, Louis was a very handsome man. His eyes were of such a deep blue that they seemed very dark, and his white wig accentuated their colour. His movements and gestures were of such grace and dignity that the Marquise often thought that, had she never seen him before and been asked to pick out the King from a crowd, she would have selected him.

She was in love with him. Even before she had met him she had had a strong conviction that she would one day be his mistress, and as soon as she saw him she had known that no other person could be so important to her as he was.

If only, she thought, I could have had his child. It was impossible now. She had had several miscarriages, but her doctor, Quesnay, had told her that she could have no more children.

It was so unfortunate. Son or daughter of Louis XV and the Marquise de Pompadour! Nothing would have been too good for that child, no honours too high. And what a bond it would have been between them! But it was not to be.

He looked a little melancholy now and she wondered whether he was thinking of the previous night, which she believed had not been completely successful for him.

The thought of her deficiencies in the bedchamber often terrified her, and she knew that the time when she must face this problem could not be far away.

However, the night was behind them; and during the day, on every social occasion, Louis could not have a more delightful and entertaining companion than the Marquise.

‘You look charming,’ Louis told her.

‘And you, Sire, are in the best of spirits.’

It was not so; but she had found that by suggesting that he looked well and in good spirits he often could be wooed to such a state.

‘Eager to hear your plans for the day.’

‘I had hoped I might have the pleasure of entertaining Your Majesty at Bellevue this afternoon.’

‘Nothing could delight me more.’

‘For this evening I have planned a little entertainment. A play, Sire. One which will amuse you.’

‘Written by your old friend Voltaire, I doubt not.’

‘Well, Sire, there are many people writing worse plays, and few better.’

The King laughed. ‘As we do not have to see the author we shall doubtless enjoy seeing his play. Have you heard news of him in Berlin?’