Главная / Исторические любовные романы / The Prince of the Soviets 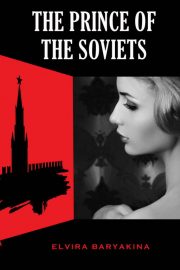 Elvira Baryakina - The Prince of the Soviets краткое содержание

With the advent of Joseph Stalin to power in 1927, the Soviet Union begins to turn into a monstrous totalitarian state eager to enslave its own population and consume the neighboring countries. But the world is not aware of what is going on since Soviet Russia closely guards its secrets and knows how to deal with the inquisitive.
Nina Kupina, a Russian political exile, is abducted by the Soviet agents in China who bring her to Moscow. She takes refuge at the house of Oscar Reich, an American millionaire who, unaccountably, has a privilege to run a private enterprise in the USSR.
Nina suspects that Mr. Reich is not who he pretends to be, and there is some shady deal between him and the Bolsheviks. But she accepts his advances, knowing that he is the only person able to help her return home to her husband, Klim, who is living in Shanghai.
Little does she know that Klim is already in Russia looking for her. To make inquiries about Nina’s whereabouts, he takes a position in the United Press as a correspondent in Moscow. His search leads him not to the reunion with his wife but to his imminent arrest as a spy. And Oscar Reich is ready to do everything to make sure Klim gets into the trap set by the OGPU (the predecessor of the KGB).

THE PRINCE OF THE SOVIETS

A NOVEL ABOUT FOREIGN JOURNALISTS IN THE USSR

TO KLIM ROGOV, the ungrateful wretch I foolishly harbored in my bosom

FROM FERNANDO JOSE BURBANO, the boss and owner of this damn radio station, the devil take it

Regarding your willful resignation

Sorry, Klim. I’m just typing what the boss dictates to me.

You had no right to resign from your job at my outstanding radio station and go charging off to the very devil itself—Soviet Russia. You’re the best radio presenter we have, and you’re causing us no end of trouble with our commercials.

We’ve only just signed a contract with the makers of Sedat-Eze sleeping tablets. I promised them you’d do them proud. Instead, it turns out you have done a runner. I detest you heartily for it, damn your eyes!

You can rest assured that I wouldn’t take you back even if you came crawling back on your belly asking my forgiveness for a whole year.

Why the devil are you going back to that den of vipers anyway? You only just got out by the skin of your teeth after the revolution.

Have you forgotten that it is run by the Bolsheviks, a godless crowd, who confiscate private property belonging to decent traders and businessmen?

If you haven’t taken complete leave of your senses, I advise you to buy yourself a big packet of Sedat-Eze and avoid the place like the plague—I’ll organize you a discount. However, if you’re serious about this crazy scheme, I hope the Bolsheviks string you up from the nearest tree.

To my boss, friend, and owner of this damn radio station, Fernando Jose Burbano

From the ungrateful wretch, Klim Rogov

Please don’t be angry with me. I am only doing what I have to do. My wife is in trouble: the Bolsheviks have deported her to Moscow, and she is in mortal danger there. I know for a fact that the Soviet political police, the OGPU, is seizing any White Russians who return to the USSR and sending them off to prison camps somewhere in the far north of the country. The OGPU don’t care if the people they arrest are guilty or not—their policy is to “neutralize” them in any case.

I have to save Nina.

I know in advance what you’ll say: “People like this lady friend of yours are nothing but bad news.” And you’re right: if I go back to Soviet Russia, I also risk falling into the hands of the OGPU—I’m also a White émigré like my wife.

And even if I do manage to get her back, I can’t expect any sort of domestic idyll in the future. Such a life isn’t possible with a woman as passionate and headstrong as Nina.

How can I explain it all to you so that you’ll understand and not take offense?

I’ve had the good fortune to find a marvelous, unique woman, and for her sake, I’m prepared to go straight into the lion’s mouth. When I’m beside her, I feel alive.

We all have something we prize above all else, Fernando. You’d risk everything for profit, but I haven’t any enthusiasm for gold mining or for creating commercial empires. If I do anything, I do it for the sake of my wife and my little daughter. I’m sorry, but it’s just a defect of my character.

Please don’t try to persuade me not to go. I know Nina and I are completely at odds at the moment; our relations are at a dead end, and I don’t see any way out. But it’s too late for me to go back now.

On the subject of your *** explanatory note.

Note from O. Harper, secretary: The asterisks indicate where Mr. Burbano used unprintable expressions. Please accept my apologies if this letter is not to your liking.

By the way, if you ever come back alive from the USSR, how about making a radio program about your adventures? I think it could be popular with our listeners. If the team that makes Sedat-Eze haven’t gone bust by then, they could be our sponsors.

You can tell our listeners about running away from the Bolsheviks, and during the commercial break, you can advise them to take tablets to calm their nerves.

Make sure you write down everything that happens to you anyway. If you find you’re about to be killed, take a moment to send us all your stories, and we’ll broadcast them.

If you need a funeral service, send a telegram. You may be a *** Orthodox Christian and not a Catholic, but I’ll say a prayer for you and do what needs to be done.

The window of Nina Kupina’s room was decorated with an intricate pattern of thin red wooden strips. At one time, the room had been occupied by the wife of an important Chinese official, and the window lattices had been a sign of success and prosperity. For Nina, however, they were nothing more than the bars of a prison, serving only to remind her of her captivity. Ever since the Bolsheviks had brought her here, she had been forbidden to leave the house, and for two months now, her world had been reduced to an inner courtyard with a weed-covered pond and a high stone wall.

Officially, the building was occupied by a scholar specializing in Oriental studies. Unofficially, it was the headquarters of the Soviet secret service, sent to Peking to organize workers mutinies and to create a new hotbed of world revolution.

It was very early in the morning, but the entire household was already up. Employees ran back and forth; abandoned possessions and forgotten documents lay scattered among the puddles.

Nina looked anxiously at the cars, which stood at the gates with their doors wide open, while young stenographers hurriedly loaded them with bundles and suitcases.

So, it was true, Nina thought. Moscow had given the order to evacuate.

It had been hot and muggy since dawn, but she kept shivering. If the Bolsheviks left, what would become of her? She hoped fervently that they would leave her behind or simply forget about her, and then she could smash the wooden lattices on the window and escape.

Recently, life for the Soviet workers in Peking had been like sitting on a powder keg. Efforts to incite revolution in China had failed, the Soviet embassy had been ransacked, and now, local communists were being executed without trial. Their severed heads were displayed in town squares as a warning to the public. By August 1927, it became clear that the Soviets were fighting a losing battle.

Moscow had spent vast amounts on propaganda and civil war in China, and somebody had to be held accountable for the disaster. The Soviet agents working in Peking found themselves caught in the middle; to one side of them were the Chinese police officers with their curved swords, and to the other side were their stern colleagues from the Bolshevik party.

The idea of returning to the USSR was an alarming prospect to say the least.

Borisov, the party instructor, came out onto the porch, and Nina shuddered. Whenever the swine had a drink inside him, he would pound at her door, slurring, “How about some class war tonight? Just you and me.” She had had to barricade herself in her room with furniture to keep him out.

Now, Nina watched two men come running up to Borisov with a map. They spread it out on the bonnet of a car and began to argue about something, pointing at different locations.

Please, let them forget about me! she prayed silently.

Six months earlier, she had, as ill luck would have it, ended up on a steamer together with a number of Soviet agents who had been arrested too. The Chinese authorities had not bothered to find out which of the passengers were communists and which were White Russians, those who had fled the country for China after the Bolshevik’s had seized power. The prisoners had been spared from execution only because Moscow had paid an enormous bribe to the judge, who had let them out of custody.

But Nina had fallen straight from one prison into another. The ruler of Peking announced a manhunt for the conspirators, and they had been forced to go into hiding in an old mansion on the edge of the city. One after the other, Nina’s “partners in crime” had been sent back to the USSR, the house’s inhabitants kept changing, and still, Nina sat in her room waiting for her invisible superiors to decide her fate.

She had been to Borisov more times than she could count, pleading him to let her go home. She had told him that she had left behind a husband and a small child in Shanghai, but Borisov would not be moved. He knew that Nina had adopted a Chinese orphan girl and refused to believe that she might really have grown attached to Kitty. As for her husband, he simply laughed at Nina’s face at the first mention of him. “I know you White whores—you sell yourselves to the first capitalist pig you can find.”