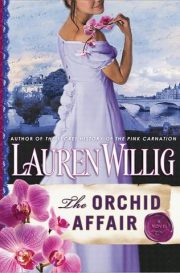 Hot on the heels of The Mischief of the Mistletoe (2010), Willig’s engaging spy series continues with an adventure set in Napoleonic France. Fresh out of spy school, Laura Grey has been dubbed the Silver Orchid and sent to France to be a governess to the children of Andre Jaouen, the deputy minister of police. It is up to Laura to discover if Jaouen and the sinister inspector Gaston Delaroche are about to thwart a Royalist plot to put a prince of royal blood back on the throne. Working with the legendary spy known as the Pink Carnation, Laura is surprised to uncover where Jaouen’s loyalties truly lie when a respected artist, Antoine Daubier, is arrested by the dastardly Delaroche. After rescuing Daubier and being forced to flee France with him and the royal heir, Laura and Andre pose as a married couple in a troupe of actors and find themselves battling their powerful feelings for each other. Another delightfully delectable adventure from Willig, who expands her rich, appealing stable of characters with each entry.

who wanted to be a privateer

but instead became a lawyer

“That was a short flight,” I said, peering out the window as the wheels of our plane touched tarmac at Charles de Gaulle. It was amazing how short a flight could be when one was in no particular hurry to arrive at one’s destination.

“We can go back and do it again,” Colin suggested. “Just to drag it out a bit.”

I tilted my head so that my cheek briefly touched his shoulder. At least, that’s what I’d intended to do. Instead I head-butted the side of his seat.

It’s the thought that counts. “I knew we should have taken the Chunnel.”

“Next time,” he said, although both of us knew that there wasn’t going to be a next time. At least, not for this particular trip. It was purely a one-off, and one on which neither of us had particularly wanted to go.

It sounds insane, doesn’t it? Anyone would think I should have been delighted at the prospect of a long weekend in Paris with my still new-enough-to-be-exciting boyfriend. We could stroll the Champs-Élysées, drink coffee in little cafés, smooch on the platform of the Eiffel Tower. Paris is for lovers. Everyone knows that.

Everyone had clearly never been summoned to Paris for a boyfriend’s mother’s birthday.

Some people had birthday parties. Colin’s mother was having a birthday weekend. We’re not talking your short, arrive-on-Saturday-morning, home-by-Sunday-evening type weekend either. The festivities kicked off Friday evening and carried on straight through Sunday night. Three whole days with Colin’s charmingly dysfunctional family was not my idea of a romantic weekend. It was, however, my idea of an Agatha Christie novel. I kept checking over my shoulder for Hercule Poirot. I could just see him twirling his mustache, saying, “Ah, ’Astings, such a tragedy about zee leetle American girl. A pity she ’ad to be the first to die.”

Meeting the parents is nerve-wracking even under normal circumstances. Colin’s family could not, by any stretch of the imagination, be called normal.

I couldn’t really complain, given that I would never have met Colin if his ancestors had been, well, sane. As a fifth-year graduate student in pursuit of footnotes to eke out my dissertation, my reasons for being in London had been academic rather than amorous. Well, that isn’t entirely true. When I came to London, I was in the throes of a doomed love affair with my dissertation topic. Some people are handed their dissertation topics by their advisors; others choose theirs for practical reasons, such as current trends on the academic job market or easy availability of sources. Not me. I had fallen madly in love with my topic: “Aristocratic Espionage during the Wars with France, 1792-1815.” The Scarlet Pimpernel, the Purple Gentian, the Pink Carnation—what wasn’t to love about dashing rogues in knee breeches racing back and forth across the Channel, outwitting the dastardly schemes of the French?

Ha. If my relationship with my dissertation was a love affair, we’re talking one of those gloomy, nineteenth-century ones where everyone dies of consumption at the end and there’s supposed to be a moral, but you can’t quite figure out what it is, other than to make sure to insulate your garret and stay away from large bottles of laudanum. In short, it didn’t love me back. The topic was dashing, it was glamorous, it was [insert your own adjective here], but like so many objects of affection, it had proved elusive.

Colin’s great-great et cetera grandfather had been one of those masked men. Under his chosen fleur de guerre, the Purple Gentian, Lord Richard Selwick had dashed around Europe in tights, rescuing aristocrats from the clutches of the guillotine. Colin liked to point out that at the time they had been called pantaloons, not tights, but a man in tights is a man in tights, call it what you will. Nothing says buckle and swash like a pair of skintight leg coverings.

Besides, a man who chooses to name himself after a flower can’t be too picky about his pantaloons.

Whatever their choice in legwear, I was very extremely grateful to Colin’s flowery ancestors. If they hadn’t kept copious journals and letters, I wouldn’t be where I was now: with Colin and the rudiments of a dissertation. I certainly wouldn’t be in Paris.

“Where are we meant to find the shuttle?” asked Colin.

I consulted the instructions the woman from the hotel had given me. “She said it would be outside baggage claim.”

“That must be it.” Colin nudged me towards a van-like conveyance.

The driver pitched his cigarette out the window, wearily extracted himself from the front seat, and trudged around to open the back of the van so Colin could pitch our bags in, a quilted overnight bag for me, a big, complicated leather folding thing for him.

The driver grunted and set the car into gear. Okay. I’d take that as a yes. If he wanted to take us somewhere else, that was fine with me.

Just as long as it wasn’t the Georges V.

Jeremy, Colin’s stepfather, who liked to do people favors they didn’t want, had booked us into the famous—and ridiculously expensive—hotel. We had canceled the reservation and booked ourselves into the much cheaper Hôtel Minerve, over on the West Bank. Neither of us was exactly flush with funds, me because I was living on a graduate student stipend, Colin because he was supporting a money-sucking estate. A grad student at the Georges V? So not happening.

Colin’s stepfather hadn’t been pleased by this decision.

Jeremy had an agenda for the weekend, and we were getting in the way of it. I wasn’t entirely sure what that agenda was, although I suspected it was only partly about Colin’s mother. Legitimation? Proving his place as head of the family? The latter was pretty ridiculous, given that Jeremy was only eight years older than Colin. Yes, Colin’s stepfather was a fair chunk younger than Colin’s mother.

I suppose this might be a good time to add that Colin’s stepfather also happened to be his second cousin.

Jeremy was Colin’s great-aunt’s grandson, and he had run off with Colin’s mother pretty much on Colin’s father’s deathbed. If you’re having trouble following that, don’t worry. It’s not just you. As Colin had pointed out to me on a prior occasion, it was all very economical. By combining cousin and stepfather in one, he saved on the Christmas gifts. Kind of like two-in-one shampoo and conditioner, only with more years of therapy involved.

It was all more than a little reminiscent of the more improbable sort of soap-opera plot. I could only hope that I wasn’t heading for kidnapping by the mafia or a three-episode-long bout of amnesia in which I would find myself embroiled with Colin’s evil twin.

For the record, Colin has no evil twin. At least, none that I know of. Yet.

His sole sibling—the only one to whom he had confessed—is a sister named Serena. Serena had taken the whole cousin/stepfather thing a lot harder than Colin had. I had my own suspicions about Serena’s relationship with Jeremy, but since that was going a little too soap-opera, even for Colin’s family, I’d kept them to myself. I could be wrong. I hoped I was wrong. And if I wasn’t wrong, I didn’t want to know.

We’d booked Serena into the Minerve with us. Not in the same room, of course. I’d been tempted to ask if they could put her on a different floor, not because I don’t like Serena, but because there’s something distinctly off-putting about knowing your boyfriend’s sister is just one thin layer of plaster away. This might not exactly be a romantic dream weekend, but I still hoped to salvage some of it. It was Paris, after all.

I looked out the window at the stone houses with their iron balconies, at the striped awnings, brightly colored even in the gloom, at the narrow streets with their ineffectual metal posts, at the garbage truck backing up in front of us, blocking off traffic for a good three blocks down.

I leaned back into the crook of Colin’s arm, resting my head against his shoulder. “Can you believe it?” I murmured. “We’re in Paris.”

“It would be strange if we were elsewhere,” Colin pointed out. “Given the direction of our flight.”

I dealt him a halfhearted swat. “You know what I mean.”

For a moment, I felt his arm tighten around me. “Yes.” Colin’s lips fleetingly brushed my hair. Then he relaxed his grip, leaning back against the seat. “My mother doesn’t want us until nine. What do you want to do before then?”

“I should get some research done.” I wiggled my way upright, resting an elbow against the faux-leather backing. “I have a whole list of documents I want to look at in the archive of the Musée de la Préfecture de Police.”

“So you really are planning to work?” It was part of the excuse we’d given Jeremy for changing hotels; the Prefecture and its archives were on the Left Bank, much closer to the Minerve.

“I suppose you have an idea?”

“Okay,” I said, wiggling around on the seat to face Colin. “You know the Selwick spy school?”

“I am familiar with the concept,” said Colin, straight-faced.

Of course, he was. It was his family. And the spy school had been run out of his home, albeit two hundred years before he got there. Colin’s ancestor, the Purple Gentian, had founded the spy school when his marriage put him out of active service in early 1803.