Главная / Современные любовные романы / The Only One 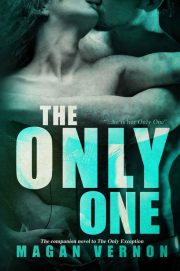 Magan Vernon - The Only One краткое содержание

Sweet and sexy!! Loved it! This is the type of story you read again and again- #1 New York Times best selling author Rachel Van Dyken
Honor student, manager at the campus coffee shop, owner of an impressive sweater collection – Melanie Wilder has it all together. Then John “John Boy” Walden strolls into her life wearing nothing more than an impish grin and all-too-revealing loin cloth.
Soon, make-out sessions replace homework, lust triumphs over work. And to further crumble her perfect world, an unexpected phone call threatens to take away everything she’s worked for.
Now, as Melanie struggles to pick up the pieces, she realizes that John may be the only one to put her life back together…unless he shatters it first.

The Only One - читать книгу онлайн бесплатно, автор Magan Vernon

My best friend. My partner-in-crime. My heterosexual life mate.

Who knew that a sickness would bring us closer together? You gave me strength when I needed it and I’m happy that we found a friendship in the darkest of places.

The sugary drink burned going down my throat. I hoped it wasn't because the guy who poured it out of the cooler roofied it. At least it drowned out the scent of sweat and stale beer. I didn't know how Monica talked me into an Alpha Mu Halloween party.

A horde of girls clad in skimpy costumes pushed past me like I was nothing more than another one of the paddles on the paneled wall. I tried to steer away from them, but my face hit a hard set of pecs. I gasped as I watched my entire drink soak through my sweater and onto my skin.

I looked up from my drenched sweater, all the way past a chiseled six pack to cool blue eyes. “Maybe you should just take it off up in my room and I can help you get dry.” He leaned in, his full lips right on my ear. “Or make you wetter.”

My breath caught in my throat, rendering me speechless. Luckily my best friend Monica jumped between us, pushing the guy back so I got a full view of him and realized he was only wearing a loincloth and a large smile.

"Down, John Boy." She scowled at him and then turned to me, almost knocking her beret off. "What the hell happened to you?"

Monica's eyes narrowed as she looked down at the red liquid soaking through my gray sweater. She whipped her head around to the loincloth-clad guy. "Was this your fault? Are you trying to get my friend naked?"

He held up his hands, a cockeyed grin on his face. "Purely an accident, Lib."

Ah, now I knew where I’d seen him before. He’d came into the coffee shop we worked at a few times. I don’t think he even glanced in my direction more than to hand me his student ID to pay, but was always calling Monica ‘Lib.’ I’m guessing because she was an extreme liberal.

Monica's boyfriend, the governor's son Trey Chapman, pushed through the crowd. Usually when I saw him he was polished in dress pants and a dress shirt, but his Halloween costume was nothing more than a pair of American flag boxers, a dress shirt, and some gray hairspray. He looked ridiculous. The Clinton and Lewinsky costumes had been Monica’s idea.

"Hey, I’ve been looking for you." He slipped his arm around Monica's waist. "What's going on here?"

"John Boy spilled a drink on Melanie to try and get her naked."

"Fine?" Monica raised her eyebrows. "That Hermione costume you've been wearing since middle school is covered in Everclear and Kool aid. That’s not fine, Mel."

"I haven't worn this since middle school!" Okay, truth was, it was my go-to costume. I’d bought it for the first movie's midnight showing and had worn it for every movie opening and Halloween since.

"Whatever." Monica turned her head to Trey and tugged on his shirt. "You can just wear Trey's shirt."

He shook his head. "I’m not walking around here just in my undershirt. The boxers are bad enough. Why don’t you give her yours?"

She looked down at the blue shift dress that we coated with white out. "Then I’ll be down to my bra and underwear."

"Not much more than a lot of the girls here are wearing anyway," I muttered.

Trey either didn't hear me or chose to ignore me and nodded his head in John Boy's direction. "John Boy, do you have an extra shirt that Monica's friend can borrow?"

The grin spread wider on John Boy's face before he ran his hand through his spiky brown hair. "I was just offering her the same thing." His eyes flitted to mine and an electric charge ran down my stomach. "What do you say, Melanie, care to come up to my room?"

I swallowed, hard. I didn't usually get propositioned by guys, especially guys with bodies that looked good in nothing but a loincloth. Every part of me was hyper aware of the curves of his muscles and I had to keep from staring at where his treasure trail stopped.

"Great, we're coming with." Monica grabbed my arm and pulled me toward the stairs.

I glanced back to make sure John Boy was actually following and he was. When he saw me look at him, he shot a wink in my direction.

"I can’t believe you were just about to go upstairs with him alone!" Monica hissed in my ear, forcing me to look at her.

"Ugh, I knew this party was a bad idea."

Trey squeezed her side and she squealed. "You think everything is a bad idea."

"Only when you don't try and give things a fair chance, Miss Remy."

I rolled my eyes, even though they couldn't see it, because they spent the rest of the way up to the second floor going on with their banter. My friend, the fierce liberal, loved picking fights with the uber conservative. It was like they rarely had a normal conversation, but she loved it. Every time she talked about him her whole face lit up. He’d finally brought her out of the dark clouds she first sat under when she transferred, and now they were inseparable.

I, on the other hand, was not taken and would have been just as happy sitting at home and not having something sticky that smelled like licorice on my costume. I’d have to ask Trey who he used for a dry cleaner.

We reached the second floor, where a few couples were making out and some girls were taking duck face photos with their phones. Ugh. Trey turned to the right and stopped at the first door.

John Boy sauntered in behind us, his loincloth still perfectly in place. Not that I was hoping for it to have shifted. "And welcome to Chez John Boy, where the magic happens."

He pushed open the door and I was overwhelmed by the smell of dirty socks mixed with cologne. The room was small, with an unmade twin bed in one corner, a futon opposite that, and a sole window across from us. Piles of clothes littered the floor and there were posters of half naked women and beer advertisements on the walls.

"I can’t believe any girl would actually screw you after seeing this place." Monica curled her upper lip, walking into the tiny room and dodging the piles of clothes.

“Some girls prefer things a little out of order. What do you think about it, Red?” John Boy winked.

“Red?” My hair definitely wasn’t red and I wasn’t one of those redheads who were in denial, like Monica, who claimed her hair was auburn. No, my hair was dirty, bottom of the sink brown and just as curly as the steel wool used to wash that sink.

“Yeah, you know, because of what’s soaking through that lovely sweater.” His eyes trailed down to the now giant red splotch across my shirt.

My cheeks heated up and probably turned just as red as my shirt.

“Okay, can you stop trying to spit your game at Melanie now and get us a shirt?” Monica groaned. Trey stood in the doorway, his arms crossed over his chest, shaking his head.

“Keep your hat on, Lib, I’m getting it.” John Boy took a few strides over to the small closet and opened it. There were only empty hangers and a dresser inside. He opened the top drawer and pulled out a dark green shirt, tossing it in Monica’s direction.

She caught the shirt and unfolded it, holding it out in front of her before curling her upper lip. “Seriously? You expect Melanie to walk around wearing this?”

“What? That’s a nice one. Usually girls have to do a lot more than just get a drink spilled on them to get one of my shirts.”

I looked over Monica’s shoulder and raised my eyebrows when I read the shirt. “Alpha Mu: We’ll make you smile like a donut.” I didn’t get it at first and then I noticed the picture. It was of a girl with her mouth as a donut, making a giant O shape. Great, a blow job shirt.

“If you want me to make you smile, Red, I’d be happy to oblige.” John Boy sauntered back over, his full height looming over me. In the light I could actually see just how built he was. He looked like one of the MMA fighters from TV with his rippling chest and the tattoos on each of his pecs and his biceps. I just thought he was a big moose of a guy. He never actually said too much to me and now he was using every cheesy line he could.

Monica sidestepped between us. She was always overprotective when it came to guys. The only time I ever saw her calm down was when she was sleeping. She went through a lot of crap before she transferred to Central College. Trey and counseling made it a lot better, but I didn’t put it past her to deck John Boy. Even though I’m not sure it would have made an impact, looking at the size of his arms. “Just back off, okay? Thanks for the shirt and I’m sure Melanie will give it to Trey to return to you.”

“She can keep it. I’m sure it looks much better on her than me. It compliments those mesmerizing green eyes of hers.” A large grin spread across his face and I could feel my own definitely heat up. I was used to blending in with the crowd and even though he probably wasn’t sincere, it was nice to get a little attention once in awhile. I didn’t even think he knew my eye color. It seemed as if the guy was actually looking at more than my chest.

Before I could respond, Monica ushered me out of the room and back down the hall.

“You could try and be a little nicer, Mon, John Boy was helping you out.” Trey followed behind us as we squeezed past the people lining the hallway.