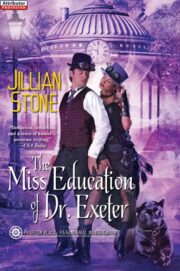 From steam-powered bunkers to steamy boudoirs, paranormal detective Phaeton Black knows his way around Victorian London. But sometimes, when you slip down a rabbit hole, there’s no turning back…
If The Portal’s A-Rockin’
Phaeton Black is missing. Sucked into an alternative universe—courtesy of Professor Lovecraft’s Trans-Dimensional Injection Portal—the illustrious investigator is nowhere to be found. Even the bewitching Miss America Jones, who’s pregnant with Phaeton’s child, has no clue to his whereabouts. But when a spy fly’s microphone picks up Phaeton’s voice in the parlors of Paris, she enlists his dearest friends to track him down—before his deadliest enemies find him first.
Don’t Come A-Knockin’
Accompanied by the dashing Dr. Exeter, his delightful ward Mia, and a trusty duo of Nightshades, it’s off to the City of Lights for the determined Miss Jones. Unfortunately, there is something about Paris in the fall that brings out the devil in Dr. Exeter—and the beast in mild-mannered Mia, whose animal urges transform her into a gorgeous panther. With physical reality unraveling on both sides of the cosmic rift, the good doctor must extract Phaeton Black from the clutches of a diabolical techno-wizard—or both could lose the women they love to love…forever.

The Miss Education of Dr. Exeter

EXCERPTED FROM THE JOURNAL OF TIM NOGGY:

28 November 1889. Phaeton Black is officially missing. He has been gone for 60 days.

2 December 1889. In the aftermath of the invasion (of Prospero’s army) of Reapers, I have managed to repair a section of the Portal Fabricator, the part Lovecraft refers to as the Inter-Dimensional Injection Portal (iDIP).

5 December 1889. Mr. Ping paid a visit today and brought with him a horde of diminutive test subjects. He calls them “flies on the wall.” I have begun limited testing of the iDIP and shall see to the dispersal of Ping’s flies. Ping would not divulge where he acquired the clever, spying insects, but they are impressive, and I am hopeful they will hasten our search to find the missing Moonstone and its keeper.

7 December 1889. It took several days, but we injected squadrons of flies into the greater Outremer. Since there are no reliable maps of the other side, we assume our local convergence of time and space is a far greater territory than London proper. I’m hoping the flies will disperse widely from here. Each spy fly is fitted with a camera and listening device.

8 December 1889. Jersey Blood and Valentine Smyth volunteered for the first mission into the Outremer since the portal connections were shut down. We anxiously await their report on the state of Prospero’s aether plant as well as his drone factory, which are located in the section of the grid marked island. (Again, I have no idea how accurate this map of Lovecraft’s is but it seems we will soon find out.) Per Gaspar’s instructions, first priority is the whereabouts of Phaeton Black. Find him, and the Moonstone cannot be far afield. Jersey and Valentine will have twenty-four hours before the machine will extract them.

9 December 1889. (2:47 a.m.) Cheers! Jersey and Valentine have returned unharmed. Since the attack, I have taken up residence behind Lovecraft’s laboratory. I had fallen asleep and awoke when the portal engine whirred to life—the auto function on the machine had begun the extraction. I was relieved to see Jersey and Valentine tumble through the portal—bedraggled and in need of rest. They left in a hurry for Half Moon Street, but promised to return in the afternoon to debrief.

I overheard a smattering of talk between the two—something about transmogrifying. The expression they used was mogging. Some people use the term shape-shifting. Call it whatever you want. I’ve been told Jersey Blood is a half-breed, part demon part human, but I’ve never seen any evidence of it. You’d think I might have caught a glimpse. A horn might have popped out of his forehead. Something. But I’ve seen nothing, not even a flash of red in the pupils of his eyes.

9 December 1889. (4:15 a.m.) A spy fly in the Outremer quadrant marked “island” picked up a conversation, one side of which appears to be Phaeton. And—I’ve got map coordinates! It seems the island on the map that we thought was London isn’t London . . .

MIA CLAWED AT HER BALL GOWN as she climbed the stairs. There it was again, that tingling feeling—more of an itch than an urge, as if her skin was stretched too tight over the wrong body. At the first signs of a metamorphosis, they had made their excuses, left the ball at Stafford House, and returned home. “Coming to bed, darling?” Her question was a flippant snarl, not a sultry invitation, for she knew he would not condescend to answer. She reached the landing and turned, surprised to see him just a few steps behind her.

As her guardian drew close, her nostrils flared. The scent of Royal Lime No. 5 layered with hints of his shaving soap assaulted her senses. She was drawn, however, to a more intoxicating musk—the very masculine essence that was Doctor Asa Exeter, enigmatic half-blooded Persian prince and English baron. “Will you let me help you, Mia?” He stood one step below her, bringing them eye to eye.

“You know that is impossible.” A momentary flash of fantasy intruded—her bare breasts exposed to his anguished gaze, nipples peaked in anticipation of the brush of his thumb. Mia shivered. The sudden surge of arousal could have caused an instantaneous shift. She shook her head gently so her tears would not spill. “The change comes faster now. You could be injured.” She lifted her chin. “Let me be, Om Asa.”

She turned to leave, and he caught her hand. “At least let me mix a powder for the headache.”

Exeter had spent a week in the library of secrets studying her condition. He well understood that her migraine warned of an impending, involuntary shift. The pain had quickly become intolerable, and he had escorted her out of the ballroom. In the carriage, she had tried to make light of it. “It seems this is my coming-out season—in more ways than one.”

Now, here on the stairs, she met his gaze, that of a protector, of caring and affection. The same look of concern she had known since childhood. The one that now caused her heart to break. “The discomfort will pass, shortly.”

Exeter rattled off a litany of symptoms. “Neuralgia, generalized body aches, a sinus drip—not sniffles from a cold, but the kind one gets from exposure, when one is out in the snow for too long.” He examined her carefully. “Typically these signs begin within a few hours of the transformation. Are they all present?”

She rolled her eyes upward. “Yes, Doctor Exeter.” The wild thing inside her stirred. The beast humped its back and stretched, languidly.

The headache had eased somewhat, which was all the more terrifying. This meant the reshaping of her body was imminent. Mia’s gaze lingered on the seraphim painted on the ceiling. God’s burning angels. “We were fortunate tonight,” she murmured. Sometimes, there were no warning signs—the shift just happened. “Jersey says as I gain experience I will be able to better anticipate the onset of change.”

As intimate as it was to be alone with Exeter, things had felt a bit desolate this evening, without the Nightshades. She had grown used to having bodyguards most everywhere they traveled. Jersey Blood and his consort, Valentine, had been assigned to her and Exeter. Jersey was a seraph shifter who rarely allowed himself to transform. He had become something of a mentor in these early months of her transformation.

“Gradually you will learn to manipulate these shifts; then you may change at will, if you so choose,” Jersey had assured her. His promise of control cheered her some, even as she fought back the urge to rip off her dress and expose herself—to rub against Exeter and purr.

“I must go.” She ran the rest of the way up the stairs and down a length of carpeted corridor. This longing to mate with her guardian was not new, exactly. But there were times now, when her desire was almost too strong to bear. Upsetting to say the least, and beyond perplexing for the good doctor. The untamed feline urge was so strong that, on one occasion, she had used coarse language and disrobed in a provocative way. Shocking behavior on her part. Now her belly trembled at the memory of Exeter’s palm cupping her breast, the moment when his thumb had stroked and she had exhaled a low, throaty rumble.

He had stepped away in horror.

Mia shook off the painful memory and burst into her bedchamber. She made it as far as her dressing table before she realized her mistake and turned back. Exeter stood in the open doorway holding an oil lamp, his gaze penetrating, measured. “I believe you need me to undress you.”

She bit her lip and nodded. Several weeks ago there had been a close call with Lucy, her maid. One evening, as she helped Mia ready for bed, a sudden, unexpected shift had happened. No warning signs. She had hissed so ferociously, the terrified girl had fled the house in the middle of the night.

Exeter entered the room and set the lamp on her dresser. “Come, Mia.” She hadn’t noticed how dark it was—mostly because her night vision was extraordinary now. She could read the ancient codex at her bedside without illumination, if she cared to be illuminated.

Placing her hands on her hips, she turned her back to Exeter.

“Please assure me you will not frighten the Metropolitan police on patrol in Green Park . . . again.” Exeter’s fingers moved down the row of hooks and eyes that fastened her gown.

“I often have no control over her . . . she’s—” Mia shifted away and he pulled her back. Persistent, gentle fingers loosed the strings of her corset. Even as her cheeks flushed with heat, cool air wafted over skin moist with perspiration. His knuckles brushed against the flesh of her back, causing a shiver she failed to conceal.

A hand slipped around her waist and he turned her toward him. “As the codex advises—assert yourself but do not force her to your will.”

“She always wants . . .” Mia avoided his gaze, until she couldn’t any longer. “You know what she wants.” Exeter’s exotic green eyes, the color of imperial jade, stayed with her. The stubble on his chin and jaw made him look swarthy, and exceedingly masculine, and yet he was also her protector.

“Gentle persuasion, Mia. The more you struggle with her—”

Inexplicably, before she could gain control over her hand, she reached out and stroked the dark, tempting ruff of his whiskers. She traced a faint, cream-colored scar that ran along the edge of a powerful jawline. Her touch stopped his conversation mid-sentence.