Главная / Исторические любовные романы / The Mischief of the Mistletoe 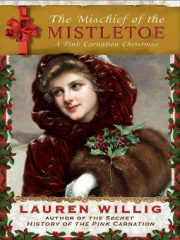 Set between the fourth and fifth novels in her charming Pink Carnation series, Willig offers up a holiday tale centered around Turnip Fitzhugh, the bumbling but well-meaning nobleman who is often mistaken for the English spy known as the Pink Carnation. Turnip isn’t looking for trouble when he visits his younger sister at her boarding school, but when he literally runs into Arabella Dempsey, a pretty young teacher, the two find themselves drawn into international intrigue via an unlikely source: a message written in French on the wrapping of a Christmas pudding. Turnip’s own limited experiences with espionage lead him to want to check it out, and Arabella agrees to go along. What seems like a frivolous endeavor soon proves to be something else entirely when Turnip learns of a missing list of English spies in France and Arabella is attacked after a school play. Forget all the Austen updates and clones — Willig is writing the best Regency-era fiction today. This delectable, exciting holiday tale will appeal to longtime fans of the series and newcomers alike.

The Mischief of the Mistletoe:

(You know who you are)

For all of you

who asked for a book about Turnip

A note for readers of the Pink Carnation series: the action of this book begins after The Seduction of the Crimson Rose, but before The Temptation of the Night Jasmine.

Your letter took me quite by surprise this morning. I believe I drank too much wine last night; I know not else how to account for the shaking of my hand today, unless it be the shock of your news. You will kindly make allowance therefore for any indistinctness of writing by attributing it to this venial error.

We are all delighted at the prospect of having you again among us, but under such circumstances! What has the world come to when elderly aunts are so profligate of their fortunes as to squander them on half-pay officers? It saddens me to see you disappointed in your expectations, however much you may claim you expected nothing of the sort. A pretty piece of work your Aunt Osborne has made of it!

Mr. Hoare straightaway said that a woman should not be trusted with money; that your aunt ought to have settled something on you as soon as her husband died. To my remark that that would have been to trust you with money, and you a woman, too, he had nothing to say... But I must say no more on this subject.

What must I tell you of your sisters? Truth or falsehood? I will try the former and you may choose for yourself another time... Margaret you will find assiduously courting all accomplishments except that of good humor. As for Olivia, I suspect she does not exist; every time I call, her head is in a book, leaving only a set of limbs sprawled on the hearthrug. I have hopes for Lavinia, who goes on as a young lady of fifteen ought to do, admired and admiring, but for a certain boisterousness of spirit that time and care will cure.

Your father was to have dined with us today, but the weather was so cold he dared not venture forth.

You deserve a longer letter than this, but it is my unhappy fate to seldom treat people so well as they deserve. God bless you! And may God speed your journey to Bath.

“ ‘So Emma,’ said he, ‘you are quite the stranger at home. It must seem odd enough for you to be here. A pretty piece of work your Aunt Turner has made of it! By heaven!.. What a blow it must have been upon you! To find yourself, instead of heiress of eight or nine thousand pounds, sent back a weight upon your family, without a sixpence... After keeping you from your family for such a length of time as must do away all natural affection... you are returned upon their hands without a sixpence.’ ”

“ ‘Poverty is a great evil, but to a woman of education and feeling it ought not, it cannot be the greatest. I would rather be a teacher at a school (and I can think of nothing worse) than marry a man I did not like.’

‘I would rather do anything than be a teacher at a school,’ said her sister.”

“I am for teaching,” announced Miss Arabella Dempsey.

Her grand pronouncement fell decidedly flat. It was hard to make grand pronouncements while struggling uphill on a steep road against a stiff wind, and even harder when the wind chose that moment to thrust your bonnet ribbons between your teeth. Arabella tasted wet satin and old dye.

“For what?” asked Miss Jane Austen, swiping at her own bonnet ribbons as the wind blew them into her face.

So much for grand pronouncements. “I intend to apply for a position at Miss Climpson’s Select Seminary for Young Ladies. There’s a position open for a junior instructress.” There. It was out. Short, simple, to the point.

Sure? Arabella had never been less sure of anything in her life. “Absolutely.”

Jane hitched her pile of books up under one arm and shoved her ribbons back into place. “If you rest for a moment, perhaps the impulse will pass,” she suggested.

“It’s not an impulse. It’s a considered opinion.”

“Not considered enough. Have you ever been inside a young ladies’ academy?”

Arabella made a face at the top of Jane’s bonneted head. It was very hard having an argument with someone when all you could see was the crown of her hat. Jane might be several years her senior, but she was also several inches shorter. The combination of the two put Arabella at a distinct disadvantage.

Six years older, Jane had always been as much an older sibling as a playmate, telling stories and bandaging bruised knees. Arabella’s father had been at one time a pupil of Mr. Austen’s at Oxford, when Mr. Austen had been a young proctor at St. John’s. Back in the golden days of childhood, Arabella’s father’s parish had lain not far from Steventon, and both books and children had been exchanged back and forth between the two households.

This happy state of affairs had continued until Arabella was twelve. She remembered her head just fitting on Jane’s shoulder as she had cried on it that dreadful winter, as her mother lay still and cold among the gray sheets on the gray bed, everything hued in ice and shadow. She remembered the clasp of Jane’s hand as Aunt Osborne’s carriage had come to carry her away to London.

“And what of your Aunt Osborne?” Jane added. “I thought you were only visiting in Bath. Aren’t you to go back to her after Christmas?”

“Mmmph.” Arabella was so busy avoiding Jane’s eyes that she stumbled. Flushing, she gabbled, “Loose cobble. You would think they would keep the streets in better repair.”

“How singular,” said Jane. “The cobbles are perfectly stationary on this side of the street. Why this sudden desire to improve young minds?”

That was the problem with old friends. They saw far too much. Arabella developed a deep interest in the cobbles beneath her feet, picking her steps with unnecessary care. “Is it so unlikely I should want to do something more than be Aunt Osborne’s companion?”

“You have a very comfortable home with her,” Jane pointed out. “One aging lady is less bother than fifty young girls.”

“One aging lady and one new uncle,” Arabella shot back, and wished she hadn’t.

Jane looked at her, far too keenly for comfort. But all she said was, “It is final, then?”

“As final as the marriage vow,” said Arabella, with an attempt to keep her voice light. “My aunt and Captain Musgrave were married last week.”

“Half her age? Yes.” There was no point in beating around the bush. It had been all over the scandal sheets. “But what are such petty things as numbers to the majesty of the human heart?”

Jane’s laughter made little puffs in the cold air. “A direct quotation?”

“As near as I can recall.” Arabella hadn’t been in a position to memorize specific phrases; she had been too numb with shock.

Captain Musgrave had made a pretty little speech out of it, all about love defying time, all the while holding Aunt Osborne’s jeweled hand in an actor’s practiced grip, while she fluttered and dimpled up at him, her own expression more eloquent than any number of speeches. In the half-dark dining room, the candle flames created little pools of light in the polished surface of the dining table, oscillating off Aunt Osborne’s rings and the diamond pendant in her turban, but nothing shone so bright as her face. In the uncertain light, with her face lifted towards Captain Musgrave, tightening the loose skin beneath her chin, one could almost imagine her the beauty she once had been. Almost.

Even candlelight wasn’t quite that kind.

One of her aunt’s friends had dropped a wineglass in shock at the announcement. Arabella could still hear the high, tinkling sound of shattering crystal in the sudden silence, echoing endlessly in her ears like the angry hum of a wasp. Arabella had made her way through the wreckage of shattered crystal, spilled claret staining her slippers, and wished them happy. At least, she assumed she had wished them happy. Memory blurred.

He had never made her any promises. At least, none that were explicit. It had all been done by implication and innuendo, a hand on her elbow here, a touch to her shoulder there, a meeting of eyes across a room. It was all very neatly done. There had been nothing concrete.

Except for that kiss.

“It would make an excellent premise for a novel,” said Jane. “A young girl, thrown back on her family after years in grander circumstances...”

“Forced to deal with carping sisters and an invalid father?” The wind was beginning to make Arabella’s head ache. She could feel the throb beginning just behind her temples. It hurt to think about what a fool she had been, even now, with two months’ distance. “If you must do it, at least change my name. Call her... oh, I don’t know. Elizabeth or Emma.”