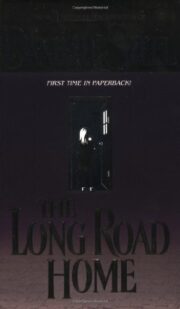 DANIELLE STEEL“A LITERARY PHENOMENON… and not to be pigeonholed as one who produces a predictable kind of book.”—The Detroit News“There is a smooth reading style to her writings which makes it easy to forget the time and to keep flipping the pages.”—The Pittsburgh Press“Ms. Steel excels at pacing her narrative, which races forward.”—Nashville Banner“One counts on Danielle Steel for A STORY THAT ENTERTAINS AND INFORMS.”—The Chattanooga Times“STEEL IS AT THE TOP OF HER BESTSELLING FORM.”—Houston Chronicle“It’s nothing short of amazing that even after [dozens of] novels, Danielle Steel can still come up with a good new yarn.”—The Star-Ledger (Newark)

THE LONG ROAD HOME“HARROWING… HAUNTING.’—People“Steel’s fans should be pleased with this story that reveals the power of forgiveness, the shame of child abuse and the spirit of survival.”—Rising Sun Herald (Md.)“A GRIPPING STORY,”—Appleton City Journal (Mo.)“DANIELLE STEEL HAS DELIVERED ANOTHER SURE TO BE BESTSELLER!”—Eclipse-News-Review (Parkersburg, Ia.)“A HARROWING JOURNEY.”—Tri-Lakes Daily News (Branson, Mo.)“RIVETING FICTION… A VIVID PORTRAIT.”—Winsted Journal (Minn.)A MAIN SELECTION OF

“You make me sound like an ax-murderer, for God's sake.” She crossed one shapely leg over the other, but for several years now he was no longer moved by her. Seeing what she was doing to their child had made him begin to hate her, but not enough to try and stop her, nor leave her. He didn't have the guts to do that, and was slowly beginning to hate himself for it.

“We should send her to school somewhere in a few years, just to get her out of here, away from both of us. She deserves that.”

“She deserves a proper education from us before that.”

“Is that what you call this? ‘Education’? Did you see the bruise on her cheek when she went to her room tonight?”

“It will be gone by morning,” Eloise said calmly.

He knew it was probably true, but hated to admit it. Eloise always seemed to know just how much force to use so that the bruises never showed on the exposed areas of Gabriella's body. The marks on her upper arms and legs were usually a different story. She was an expert at it.

“You're one sick bitch,” was all he said to his wife as he left the room and walked unsteadily to their bedroom. She was, but there seemed to be nothing he could do about it. He stopped in the open doorway of his daughter's room on the way, and stared into the darkness. There was no sign of life there, no sound, and the bed appeared to be empty, but when he walked softly into the room and looked more closely, he saw a small lump at the bottom of the bed and knew it was Gabriella. She always slept that way, hidden way down in the bed, so that her mother wouldn't think she was there if she came to find her. Tears filled his eyes as he looked at the small, barely visible lump of battered terror that was his daughter. He didn't even dare pull her back up to the empty pillow. It would only expose her to Eloise's anger again, if she came in to see her. He left her there, lonely and alone and seemingly forgotten, and turned and walked on to his own room, wondering at the injustices of life, the inhumanity that had befallen his child, and yet he knew as he walked away from her, he knew that there was nothing he could do to save her. In his own way, he was as powerless against his wife as Gabriella. And he hated himself for it.

THE GUESTS BEGAN arriving shortly after eight o'clock at the town house on East Sixty-ninth Street. A handful of well-known socialites were there, a Russian prince with an English girl, and all of the women Eloise normally played bridge with. The head of the bank where John Harrison worked had come with his wife, and waiters in dinner jackets were serving champagne on silver trays as the guests arrived, as Gabriella sat hidden at the top of the stairs, watching them. She liked watching the guests when her parents gave parties.

Her mother looked beautiful in a black satin gown, and her father looked handsome and elegant in a well-cut tuxedo. The women's dresses shimmered as they came into the hall, and their jewels sparkled in the candlelight as they took their glasses of champagne, and seemed to drift away toward the voices and the music. Eloise and John loved giving parties. They did it less often now, but they still entertained lavishly from time to time, and Gabriella loved watching the guests as they arrived, and lying in her room afterward listening to the music.

It was September, the opening of the New York social season. And Gabriella had just turned seven. There was no special occasion for the party that night, just a gathering of their friends, some of whom Gabriella recognized as she watched them. There were a few she had always liked, and who were nice to her on the rare instances when they saw her, which wasn't often. She was rarely introduced to their friends, seldom seen, never made much fuss of. She was simply. there, hidden away upstairs, mostly forgotten. Eloise didn't think children should be seen in social situations, and Gabriella's existence in their lives was anything but important to her. Now and then one of her friends asked about the child, mostly at her bridge club, and she dismissed their inquiries with a graceful hand, like an annoying insect that had crossed her path and could be brushed away just as quickly. There were no photographs of Gabriella in the house, although there were many of Eloise and John, in silver frames. There were never any photographs taken of Gabriella. Recording her childhood was of no particular interest to them.

Gabriella smiled as she saw a pretty blond woman walk into the hall downstairs. Marianne Marks was wearing a white chiffon dress that seemed to float as she moved, talking to her husband. She was one of her parents’ closest friends, and her husband worked with Gabriella's father. There was a diamond necklace glittering on her neck, and her hands moved gracefully as she took a glass of champagne from one of the waiters. And then, as though sensing something, she glanced upstairs, and stopped when she saw Gabriella. The woman's face seemed to be suffused with light, and from the glow of the candles in the chandelier, she almost seemed to be wearing a halo, and then Gabriella realized that the sparkle she saw there was from a tiny diamond tiara. She looked like a fairy queen to Gabriella.

“Gabriella! What are you doing up there?” Her voice was gentle and warm, as she smiled broadly, and waved to the child hiding on the top step in her pink flannel nightgown.

“Shhh…” Gabriella put a finger to her lips with a worried frown. If they knew she was sitting there, she would get in terrible trouble.

“Oh…” Marianne Marks understood instantly, or thought she did, as she ran upstairs quickly, on light feet, to see her. She was wearing high-heeled white satin sandals, and made no sound, as her husband waited for her downstairs, smiling at his wife and the pretty child who was whispering now, as Marianne embraced her. “What are you doing up here? Watching the guests arrive?”

“You look so pretty!” Gabriella said with an awestruck air as she nodded in answer to the question. Marianne Marks was everything that her mother wasn't. She was beautiful and fair, she had big blue eyes like Gabriella's and a smile that seemed to light everything around her. She seemed almost magical to Gabriella, as she watched her, and sometimes she couldn't help wondering why she couldn't have had a mother like this one. Marianne was about her mother's age, and always seemed sad when she said that she had no children. Perhaps there had been a mistake somewhere, perhaps Gabriella had been destined for a woman like this, and had come to her own parents by mistake instead… maybe because she was so bad, and needed to be punished. She couldn't imagine Marianne punishing anyone. She was always so kind and so gentle, and she seemed so happy, particularly now as she bent down to kiss Gabriella, and as she did, Gabriella could smell the warm, delicious smell of her perfume. Gabriella hated the scent of her mother's perfume. “Can't you come downstairs for a little while?” Marianne asked, wanting to whisk the little girl into her arms and take her downstairs with her. There was a quality to the child that always seemed to reach out to her and seize her heart. Everythi… out the little girl made her want to love and protect her. She didn't know why she felt that way, but Gabriella was one of those rare, fragile souls that reached out and touched you, and Marianne felt the pull of her now as she took her hand in her own and held it. It was small and cold and the fingers felt unbearably frail, the grip firm and almost pleading.

“No, no… I can't come down… Mommy would be really angry. I'm supposed to be in bed,” she whispered. She knew the penalty for leaving her bed and disobeying those orders, yet she could never resist the temptation to watch the people arriving for her parents’ parties. And now and then there was a bonus like this one. “Is that a real crown?” Marianne looked like the fairy godmother in “Cinderella” to her, and Robert Marks, waiting for his wife patiently at the foot of the stairs, looked very handsome.

“It's called a tiara,” Marianne giggled. Gabriella had to call her either Aunt Marianne, or Mrs. Marks. There were severe penalties for calling her parents’ friends, or any adult, by their first names, and she knew that. “Isn't it silly? It belonged to my grandma.”

“Was she a queen?” Gabriella asked solemnly with the huge, knowing eyes that always touched Marianne Marks’ heart in ways she didn't quite understand, but felt acutely.

“No, she was just a funny old lady in Boston. But she met the Queen of England once, that's when she wore this. I thought it would be fun to wear it tonight,” and as she explained, she unpinned it carefully from her elegantly coiffed blond hair, and set it gracefully on Gabriella's head of blond curls with a single gesture. “Now you look like a little princess.”

“I do?” Gabriella looked awestruck at the prospect. How could anyone as bad as she look like a princess?

“Come… I'll show you,” the pretty blond woman whispered, and took her hand and led her across the upstairs hall to a large antique mirror. And as Gabriella stared at her own reflection with wide eyes, she was startled by what she saw there. She saw the beautiful woman standing next to her, looking down at her with a warm smile, and the elegant little diamond crown shimmering atop her own head, as Marianne held it.

“Oh… it's so beautiful… and so are you…” It was one of the most magical moments in her short life, a moment engraving itself forever on her heart as they stood there. Why was this woman always so kind to her? How could she be? How could she and her own mother be so different? It was a mystery that, to Gabriella, defied explanation, except that she knew, and had for years, that she had never done anything to deserve a mother like this one.