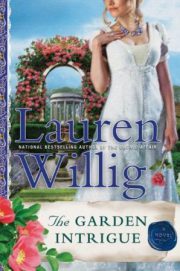 In the ninth installment of Lauren Willig’s bestselling Pink Carnation series, an atrocious poet teams up with an American widow to prevent Napoleon’s invasion of England.
Secret agent Augustus Whittlesby has spent a decade undercover in France, posing as an insufferably bad poet. The French surveillance officers can’t bear to read his work closely enough to recognize the information drowned in a sea of verbiage.
New York-born Emma Morris Delagardie is a thorn in Augustus’s side. An old school friend of Napoleon’s stepdaughter, she came to France with her uncle, the American envoy; eloped with a Frenchman; and has been rattling around the salons of Paris ever since. Widowed for four years, she entertains herself by drinking too much champagne, holding a weekly salon, and loudly critiquing Augustus’s poetry.
As Napoleon pursues his plans for the invasion of England, Whittlesby hears of a top-secret device to be demonstrated at a house party at Malmaison. The catch? The only way in is with Emma, who has been asked to write a masque for the weekend’s entertainment.
Emma is at a crossroads: Should she return to the States or remain in France? She’ll do anything to postpone the decision-even if it means teaming up with that silly poet Whittlesby to write a masque for Bonaparte’s house party. But each soon learns that surface appearances are misleading. In this complicated masque within a masque, nothing goes quite as scripted- especially Augustus’s feelings for Emma.

To Jenny Davis and Liz Mellyn,

for coffee, Cosmos, and Cayman.

Below me, in the gardens of Selwick Hall, someone was trying to maneuver a large black metal contraption down an alleyway of elderly shrubs. From the sound of it, the score was shrubs: 1, cameramen: 0. Like its owner, the grounds of Selwick Hall were putting up a fight against the invasion of an American film crew.

I was one of those barbarian Americans, too, but I fell into a protected category: I was the owner’s girlfriend.

It hadn’t always been that way. There had been a time when Colin regarded me with nearly as much mistrust as he did the members of the DreamStone film team. As I kicked back in Colin’s desk chair, watching the dust motes dance in the May sunshine filtering through the sash window, those grim days of October felt like an entire universe ago, in a galaxy far, far away.

In October, I had been just another bedraggled American grad student in London, desperately combing the archives for the materials I needed to turn my dissertation from a vague outline into a heartbreaking work of staggering scholarship.

We had been told to go forth and find a gap in the historiography, and that’s just what I had done, smugly certain that I would put together pieces no one else had been able to connect, patting myself on the back for my cleverness in picking as my field of study a country in which the language was my own. One of my best friends was immured in the basement of an Austrian monastery, puzzling out Carolingian charters in a version of Latin that would make a classics professor cry; another was in Brazil, in an archive where the air-conditioning regularly broke down and all the women on the beach were waxed in improbable ways.

But me? I was going to England. The mother country. Home of scones, clotted cream, and BBC costume dramas. England, where they speak English better than we do. England, where no one waxes anything because everyone is draped in tweed. It would be just like being home in New York, only with cuter accents. I was going to the land of Mr. Darcy (and Mr. Bean, but, hey, every ointment comes with its flies) to research a dissertation topic that thrilled me down to the polish on my toenails.

Aristocratic espionage during the wars with France: 1789–1815.

Does it get any better than that? There could be little more thrilling than men in knee breeches meeting for huddled conferences in the back rooms of inns from Paris to Calais, smuggling aristocrats out of the clutches of the guillotine, while exchanging terse notes ending with the directive “Burn this letter.”

It didn’t occur to me until later that there might be a slight problem. Historians are dependent on documentary evidence for the reconstruction of the past. When the people involved routinely burn the documents in question, there isn’t a lot left to go on. In fact, there was nothing left to go on. I combed through the collections of the British Library, nagged the archivists at the Public Record Office, and tramped through an infinite number of country records offices, all with the same dispiriting result.

All I had were rumors and legend, garbled and inconsistent stories about the exploits of a spy called the Pink Carnation, who, if the London papers and the records of the French Ministry of Police were to be believed, had been a greater thorn in the flesh of the French than anyone with the possible exception of Wellington. And, of the two, the Pink Carnation had been in operation longer. Or so the stories claimed. On the theory that there ain’t no smoke without fire, I had confidently set out for material to verify that. And found nothing.

Until I met Colin. His family archives were the academic equivalent of the Holy Grail.

He wasn’t so bad himself.

Right now, he wasn’t exactly a happy camper. I could hear the snick of rubber-soled shoes on flagstones, and Colin’s voice below, raised over the sound of smashing shrubbery. The word “damage” seemed to figure prominently. The scents of spring wafted through the open window, fresh-cut grass and wildflowers and stale tobacco.

Perched safely above the fray, two stories up, I leaned sideways in Colin’s desk chair, craning my neck to try to see out the window. From my current vantage point, all I could see was a confusion of tree branches, exuberant in their spring foliage, and, if I tried really hard, something long, black, and metallic that I assumed was part of the scaffolding for lighting. Either that or a missing piece of the Death Star.

I hadn’t been in the gardens since the crew had arrived, but with the noises coming from that direction with earsplitting regularity, I feared the worst. The crew had been on location for two days now, setting up equipment and running light tests and doing whatever else it was that film people do. I had resisted the urge to hover and gawk. After all, I was a mature and responsible academic; we weren’t supposed to go all wide-eyed at the sight of things like movie cameras, nor wonder whether anyone would notice if we waved at the camera and mouthed “Hi, Mom!”

Besides, given Colin’s feelings about the proceedings, showing too much interest smacked of disloyalty. To say Colin hadn’t been thrilled about renting out Selwick Hall to American film star Micah Stone for his latest blockbuster would be like saying that Cookie Monster had a slight thing for baked goods. Colin had been presented with the situation as a fait accompli at his mother’s birthday party in Paris two months before, in public, with the cameras flashing. It had not been a good time.

Colin had only just started speaking to his mother again. He still wasn’t speaking to his sister, Serena, the weak link, the deciding one-third vote that had enabled his stepfather, Jeremy, to get away with inviting DreamStone to film at Selwick Hall. It was Serena’s defection that hurt Colin the most, even more than seeing his beloved home, the one he had gone to such trouble to restore and maintain, trampled under the feet of Micah Stone and his merry men.

Both Colin’s great-aunt Arabella and I had made tentative gestures towards a reconciliation with Serena, but Colin had shot down all of our attempts. I wasn’t pushing it. My own position in his life was too new and too tenuous to risk.

Tenuous and possibly about to end.

Abandoning the window, I turned back reluctantly to the computer screen. The e-mail was still there. It hadn’t obligingly zapped itself back into cyberspace in the past five minutes.

On the face of it, there was nothing about the e-mail to occasion forebodings of dread and gloom. No threats, no dire warnings, no offers to make my manhood throb more manfully or share a bank account in Rwanda. It was a perfectly pleasant e-mail from the Modern Germany professor offering me two sections and the position of head teaching fellow for his Modern Europe course.

Not entirely my area of expertise, but still better than that semester I had wound up teaching Charlemagne, unable to tell my Carolingians from my Carolinas. I wasn’t exactly thrilled with the twentieth century, but I had done a field in it, so I could teach it, and the head TF position came with an extra financial incentive, payback for being the one in the unenviable position of playing middleman between a busy professor, demanding students, angsty teaching staff, and the entire administrative panoply involved in booking rooms, scheduling sections, printing course packets, and making nice to the A/V people.

My fellowship, the one that had sent me to England, would run out in June. Two sections and the head TF post meant my rent would be paid. It also meant I wouldn’t be piecing together teaching jobs in different courses, a section here, a section there, which meant triple the effort learning the material and keeping up with the coursework. All in all, it was an exceedingly handsome offer.

So why did it make me feel like I’d swallowed a bucket of lead?

I rested my head on my balled-up hands, letting my hair swing around my face. It was growing out, I thought inconsequentially. Yet another sign of just how long I had been in England. It had been more than eight months now, September to May. It had seemed like plenty of time, back in Cambridge. The other Cambridge. Ten months in England. I would get my material and go back to America to write it up, proceeding smoothly through the paces like a good little academic in training.

I hadn’t factored in the addition of another person. I hadn’t counted on Colin.

Ten months. What was that? Nothing but a whisper in time, over before it had begun. I hadn’t met Colin until I was two months in. Then there had been this and that and suddenly we were down to a month and a half and it just wasn’t enough. I didn’t want to go back. I didn’t want to go back to my studio apartment in Cambridge, with all its accoutrements for one: one twin bed, one dresser, one desk. It didn’t matter that I liked my apartment, that it had my books, my pictures, my coffeemaker. It didn’t matter that just five months ago I had been yearning for Cambridge with homesick fervor, for the smell of Peet’s Coffee and the peculiar slant of late afternoon light across the floor of the history department library, for the cranberry muffins at Broadway Market and the smell of sweat and suntan lotion on the banks of the Charles on a sunny day.