Главная / Исторические любовные романы / The Deception of the Emerald Ring 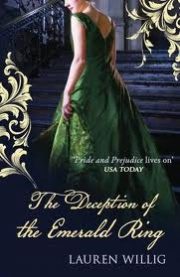 Лорен Уиллиг - The Deception of the Emerald Ring краткое содержание

Harvard Ph.D. candidate Eloise Kelly continues her research of early 19th-century spies in the smart third book of the Pink Carnation series, following the well-received The Secret History of the Pink Carnation and The Masque of the Black Tulip. This installment focuses on 19-year-old Letty Alsworthy, who, after a comedy of errors, quickly weds Lord Geoffrey Pinchingdale-Snipe, her older sister’s intended. Geoffrey, an officer in the League of the Purple Gentian, flees to Ireland the night of his elopement. Unbeknownst to Letty, his plan isn’t to abandon her; it’s to quash the impending Irish Rebellion. When Letty tracks down her prodigal husband in Dublin, not only does she learn of his secret life as a spy, she’s sucked into it with hilarious results. Willig—like Eloise, a Ph.D. candidate in history—draws on her knowledge of the period, filling the fast-paced narrative with mistaken identities, double agents and high stakes espionage. Every few chapters, the reader is brought back to contemporary London, where Eloise gets out of the archives long enough to nurse her continuing crush on Colin Selwick. The Eloise and Colin plot distracts from the main attraction, but the historic action is taut and twisting. Fans of the series will clamor for more.

The Deception of the Emerald Ring

To all my grandparents, with love.

Some books are a joy to write. Fluid lines of perfect prose unroll across the computer screen, the plot unfolds without holes or wrinkles, and all the characters go exactly where they're told.

This was not one of those books.

I would like to extend my heartfelt gratitude to all those people who patiently repeated, "Yes, the book will get done. No, your career isn't over," and didn't push me into the Charles River, no matter how much they might have wanted to. Sincere thanks go to both my editors, Laurie and Kara, who were angels of forbearance over missed deadlines and an outline that changed about once a week; to my family, who didn't disown me; to Nancy, Claudia, Liz, Jenny, and Kimberly, who undertook the monumental task of keeping me sane through the long, dark months of struggling with simultaneous law school and book deadlines; to Weatherly, who made sure I got my monthly recommended allowance of alcohol; and to Emily, who went to Globalization so I didn't have to. An extra special thank-you goes to those readers who generously took the time to e-mail with words of praise and encouragement. Those e-mails kept me writing when even caffeine failed. Thank you all, so much.

As for everyone else, I haven't been deliberately avoiding you, honestly. I really have been meaning to return that phone call/e-mail/singing telegram. And I will. I promise. Just as soon as I get started on Pink IV….

At least, my phone wasn't ringing. The same, unfortunately, could not be fsaid of the man sitting in front of me, whose mobile kept shrieking with all the abandon of an inebriated teenager on a roller coaster. Each time his phone shrilled out "Danger Zone" from Top Gun, I lunged for my bag. After a mere ten minutes on the bus, my abs had gotten more of a workout than they had in months.

I hauled my computer bag up onto my lap for easier access and slid my hand into the front pocket, just to make sure that the phone was still there. It was. Further inspection revealed that the ringer was on, the volume turned up, and all the little bars indicating signal strength blinking merrily away. Damn.

Sticking the phone back in my bag, I listened to the man in front of me recite his weekend's activities for the fifth time. They seemed primarily to involve adventures in alcohol poisoning, and an encounter with a burly bouncer that grew more elaborate with each retelling. Craning my head toward the window, I checked the progress of the traffic ahead of us. It hadn't. Progressed, that was. The bus sat as steadily immovable as an island in a tropical sea, placidly parked behind a string of other, equally immobile buses. It didn't improve the situation that the light was green.

I knew I should have taken the tube.

There had been all sorts of good reasons to choose the bus that morning, as I set out from my Bayswater flat towards the British Library. After all, the tube always broke down, and it couldn't be healthy to spend that much time underground, and the fact that it was actually not raining in England in November needed to be celebrated…. And the bus had cell reception while the Underground didn't. I glowered in the direction of my phone.

Life would be far more pleasant if I were better at fooling myself.

One day. It had only been one day by the calendar, two years in terms of agonized phone staring, and about half an hour in boy time. It is a truth universally acknowledged that time moves differently for men. There was, I reminded myself, no reason why Englishmen should differ from their American counterparts in this regard.

There was also the fact that Colin didn't have my phone number. But why let reality interfere with a good daydream? And my daydreams…Well, they weren't really the sort of thing one could get into on a public bus, even if other people—I scowled at the man in front of me, who had progressed from barhopping to amorous adventures—had no such scruples. Besides, if Colin wanted my phone number, he knew how to find it.

After a sleepless night alternating between daydream and denial, I had finally admitted to myself just how much I really hoped he wanted it. Colin was, not to put too fine a point on it, the first man who had made my pulse speed up since a breakup of massive proportions the previous winter.

Admittedly, when we'd first met, the emotion quickening in my veins hadn't been attraction. Irritation was more like it, and that sentiment, at least, had been entirely mutual. What it all boiled down to was that I was going through his family's archives and he didn't want me to.

It wasn't prurient interest that drove me to Colin's family papers, but academic desperation, the sort that sets in at some point after the third year of grad school, as the bills begin to mount, teaching bored undergrads loses its luster, and the coveted letters "Ph.D." continue to dance a mocking jig just out of reach. No dissertation, no degree. I had nightmares of becoming one of those attenuated grad students who lurk in the basement of the Harvard history department, surrounded by books so overdue that the library has long ago given up toting up the fines. Every now and again, you'll encounter one of them making the long trudge up the stairs to the first floor, and wonder who on earth they are, and how long they've been down there.

I refused to become one of the forgotten basement dwellers of Robinson Hall. Among other things, the vending machine down there had a very limited selection.

Unfortunately, the dissertation topic that I had chosen with such naive optimism at the end of my second year proved to be just like its subject: elusive. I was after a trio of spies, the Scarlet Pimpernel, the Purple Gentian, and the Pink Carnation, those daring men in knee breeches and black cloaks who twirled their quizzing glasses in the face of danger and never failed to confound the agents of the French Republic.

Unfortunately, they also confounded me. There was, I discovered, a reason that no one had written a book on the topic. The material just wasn't there. True, we knew who the Scarlet Pimpernel and Purple Gentian were, and even much of what they had done, but the Pink Carnation's identity remained shrouded in mystery, the only evidence of his existence a series of contemporary accounts in newsletters and diaries, each recorded exploit more improbable than the last. Some scholars, sitting in the security of their twentieth-century studies, had decreed that the dearth of corroboratory evidence could mean only one thing. The Pink Carnation was a creature of myth, a deliberate fabrication invented by the British government to buoy their beleaguered nation through a prolonged and desperate struggle.

I enjoyed a good little gloat over that. There's nothing like a little "I told you so" to make one's day. On a rainy day the previous week, Mrs. Selwick-Alderly, an elderly descendant of the Purple Gentian, had admitted me to a virtual Ali Baba's cave of historical documents, the diaries and letters of the Purple Gentian and his half-French bride, Miss Amy Balcourt. Then there was Amy's clever cousin, Miss Jane Wooliston—better known as the Pink Carnation. As a dashing spy, she was an unlikely choice. Whoever heard of a spy named Jane? Or Wooliston, for that matter? The very name suggested fleecy sweaters and woolly hats, a frizzy-haired Miss Marple puttering about the village green. It was the sort of discovery that had "tenure" written all over it.

Unfortunately, like Ali Baba's cave, this one came with a catch. Instead of forty thieves, my treasure trove came complete with one very irate Englishman. Mr. Colin Selwick didn't much like the idea of strangers rooting about in the family archives, and he became positively apoplectic at the prospect of the publication of his family's papers. He was also definitely, undeniably possessed of more than the ordinary measure of good looks. After a couple of late-night encounters, the sparks he was emitting weren't all of the negative variety.

Two nights ago, there had been a little incident involving a dark room, an arm above my head, and a deliberate movement forward that might have been about to turn into a kiss, when…

Ringing! It was ringing! I lunged for the bag and snatched out the phone, hitting the green RECEIVE button before the caller could think better of the enterprise. "Hello?" I breathed.

"Eloise?" Instead of a masculine murmur, the voice had the crackly quality of old film.

Damn. I deflated against the nubby upholstery. Served me right for not checking the number before I hit RECEIVE.

I settled the phone more firmly against my ear. "Hello, Grandma."

Grandma wasted no time on trivialities. "I'm so glad I've caught you."

I stiffened. "Why? Is something wrong?"

"I wasn't aware I had lost one," I muttered.

Of course, that wasn't entirely true. To say I'd lost him might be a bit extreme, though. In the first place, I wasn't sure that he was mine to lose. In the second place…

In the second place, Grandma was still talking. With an effort, I dragged my attention back to the phone, just as the bus started to crawl slowly ahead. "—in Birmingham," she was saying.

"What about Birmingham?" I asked belatedly.

Over the headrest, the man in front of me gave me a dirty look. "Would you mind?" he said, gesturing to his phone.