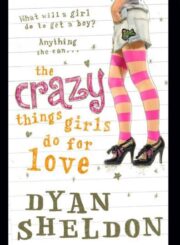 Fashion-crazy Sicilee is a poster child for over-consumption. Her archrival, Maya, wears arty vintage clothes but hasn’t a clue what’s in the food she eats. So when drop-dead gorgeous new student Cody Lightfoot sets out to spread his eco-ways—and spur the Environmental Club toward an all-out Earth Day bash—Sicilee and Maya have their work cut out to attract his attention. What if Sicilee trades her fur boots for walking shoes (even if she can’t find the school when she’s not inside a car)? What if Maya dresses in plastic bottles and bags to preach in front of the supermarket (until security is called)? Or could it be that Cody isn’t all he’ s cracked up to be, and that saving the planet really is more important than impressing a boy? With her trademark quick-fire wit, Dyan Sheldon shows just what girls will do for love—and what earth-changing realizations they might have along the way.

Dyan Sheldon - The Crazy Things Girls Do for Love

For all eco-warriors everywhere.

It is a dark and rainy morning. An unfriendly wind pulls at clothes and umbrellas, and rustles the plastic bags caught in branches and overhead wires so that they make a forlorn, unhappy sound. Bent, huddled figures hurry through the downpour, jumping over puddles and avoiding the sodden grass as they make their way to the sprawl of buildings that is Clifton Springs High School.

Two bright spots flicker against the gloom of the storm like flames in a starless night. They are Sicilee Kewe and her best friend Kristin Shepl, two of the school’s most popular students. Kristin is enveloped in an oversized, hooded white coat, trimmed in fur that may once have barked or even miaowed, but for Sicilee this is an orange day – orange bag, orange boots, orange hat, orange jacket, orange dress over black-and-orange leggings.

The plastic bags trapped in the trees aren’t the only ones making forlorn, unhappy sounds.

“It just isn’t fair,” Sicilee moans. “Why do we have to come back today?” The orange umbrella bobs indignantly as she sidesteps a small body of water that Kristin, her eyes on Sicilee, inadvertently walks through. “Sweet Mary, it’s practically the middle of the week. I mean, really, what difference would a measly couple of days make? I swear, sometimes I really think there’s some kind of conspiracy going on to ruin my life.” The Christmas vacation is always far too short. There’s never enough time to do all the things that need to be done. The shopping. The parties. The entertaining. The outings. The visits. The events. And then there are all the preparations for New Year’s Eve – hair, nails, facial, sauna, more shopping. Not to mention the trips to the gym. You can’t be stuffing your face with roast beef and cookies and not go to the gym a couple of times at least. “I haven’t really had time to recover,” says Sicilee. “It’s a miracle I don’t have dark circles under my eyes or zits.” Besides which, Sicilee hasn’t even had a chance to take back all the presents that were the wrong colour, make or size. “Like that bag my Aunt Clarice and Uncle Vaughn gave me? You saw it, Kris. It’s a good label and everything, but it is, like, so totally last year that I can’t possibly be seen with it over my arm. I might as well carry all my stuff in a shopping bag from the supermarket.”

Kristin, who is now warily watching the ground for more surprise puddles, sighs. “I could’ve used more down time too, but, to tell you the truth, in one way I’m almost glad to be back at school.” That one way is Kristin’s mother. “Nag, nag, nag, nag, nag… It’s like she’s on automatic or something. She didn’t even stop for Christmas Day. I said to her, ‘You know, this is supposed to be the season to be jolly – not the season to go on and on about who didn’t empty the dishwasher’.”

“Oh, that’s nothing,” Sicilee assures her. “I didn’t tell you what happened last night at Chez Kewe.” She rolls her eyes. “It was like Nightmare on Coldwater Drive.”

Sicilee sighs. “Nothing, really. All I did was very casually say that I figured it was time we did ssomething about enlarging my closet – you know, since I can hardly turn around in it, it’s so freaking small.”

“Not this time. You know my mom, she prefers to talk you into submission than yell if she can. It was him.” Sicilee’s eyes (brown today to complement her outfit) widen dramatically. The orange umbrella sways with emotion. “I couldn’t believe it! One minute he was all normal and talking about having the tyres rotated, and the next he was all puffed up and practically drooling. It was like he was the Incredible Hulk or something. I felt like saying, ‘Hey, who changed the script?’ You should’ve heard him, Kris. He was yelling and screaming about how much everything costs and how spoiled I am and how when he was my age he worked thirty-eight hours a day so he’d have some lunch money and kept his one shirt and pair of jeans in a paper bag under his bed.” Sicilee is smiling as she tells her tale, but not because her father’s tantrum was amusing. Like the picture on the label stuck on a package of cheap meat, Sicilee’s smiles bear little relationship to what’s going on inside. She is smiling because she is out in public, a place where she smiles all the time. “And then he said that if I want to be able to throw a party in my closet, I should stop buying so many clothes.”

“I told him. I said, look, I’m sorry, but I can’t cut back on something as important as my wardrobe. I do have a reputation to uphold, you know.”

“Well, duh… Of course you do.” Kristin shakes her head sadly. “They don’t get it, do they? They think you get to be really popular just by luck.”

“There was no explaining that to him last night, that’s for sure,” says Sicilee. “I swear, he was so overwrought, I thought he was going to have a stroke.”

“My dad gets like that. I figure it’s stress.”

“You’re probably right.” Sicilee sighs. “They said on TV that stress is the disease of the twenty-first century.”

“Too true,” agrees Kristin. “Plus, it was Christmas. That’s extra stressful. And you didn’t get to go skiing this year. That probably tightened his screws even more.”

The Kewe family’s annual ski trip had been cancelled this Christmas due to an unexpected lack of snow. Clifton Springs, apparently, is not the only place experiencing unseasonable weather.

“Well, it’s not like he was the only one to know crushing disappointment, Kristin.” Sicilee suddenly veers to the right, leaving Kristin on her own with the unfriendly elements. “I was looking forward to the ski trip too, you know. I mean, I haven’t been anywhere since we went to Cabo in the summer.”

“Yeah, but you know what parents are like. It’s all themthemthem…” Kristin jogs a few steps to get back under the umbrella. “So what are you going to do about your closet?”

“Oh, you know…” Sicilee’s smile takes on a philosophical tinge. “I’ll wait for him to calm down and everything, and then I’ll hit him with it again.”

Having safely reached the portico of the main building, Sicilee makes a sudden, unscheduled stop to check out her reflection in the glass doors. “Sweet Mary!” She tilts her head first to the left and then to the right, her scrutiny both professional and thorough despite the makeshift nature of her mirror. Although Sicilee has, in fact, been exposed to the storm for only a few minutes, she is far from happy with what she sees. “Look at me!” she wails. “I look like I went down with the Titanic!”

The boy who was forced to stop short behind her gives her a nudge. “Will you just go in?” he grumbles.

Sicilee lifts her umbrella so she can see him glowering over her shoulder. It’s Clemens Reis, one of the greatest geeks who has ever lived, and the fact that he touched her does nothing to improve Sicilee’s mood. She gives her umbrella a shake before shutting it, causing more grizzling at her back, and pushes open the doors.

The lobby is packed with students noisily reuniting after the holidays. All is not lost. Sicilee doesn’t see anyone whose opinion she cares about among them. “I’m going to the girls’ room. Right now. I have to repair the damage before anyone sees me,” she shouts above the din to Kristin. “You go and find Ash and Loretta. I’ll meet you by the lockers.”

Never handicapped by the sense that she needs to be either patient or polite, Sicilee marches through the crowd, which magically parts for her as the sea did for the Children of Israel. But when she reaches the nearest bathroom, Sicilee discovers that her day hasn’t started to improve just yet. Oddly enough, she isn’t the only one whose hair and make-up have been adversely affected by the bad weather. The space around the sinks is packed tighter than a designer sale. Sicilee’s sigh is heartfelt. Why does everything happen to me? she thinks. And she turns around and heads for the bathroom on the floor above. Which is sure to be empty at this time of the morning, being so far away.

There are two girls standing together near the entrance to the first-floor restroom. Sicilee doesn’t actually look at them. But, of course, she doesn’t have to. She knows instinctively – by their hair (which has obviously never seen the inside of a decent salon) and their bodies (scrawny and pudgy, respectively) and their clothes (beyond hopeless) – that they are geeks from the netherworld. Which puts them way beneath her notice. Because they happen to be in her way, Sicilee pushes past them, hitting the larger of the two (the pudgy one) with her bright orange backpack and knocking a stack of papers out of her hands.

“Hey!” snaps the girl. “Why don’t you watch where you’re going, Princess Pumpkin?”

Her companion quickly jumps back, banging her head against the wall.

Sicilee glances over her shoulder, like a movie star forced to acknowledge a ragged beggar because the beggar is hanging on to her ankle. “Are you talking to me?”

“Well, maybe if you weren’t such a heffalump, you wouldn’t be in my way,” Sicilee drawls. And, still smiling, she yanks open the door.