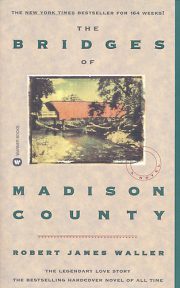 The Bridges of Madison County is a 1992 best-selling novel by Robert James Waller which tells the story of a married but lonely Italian woman, living in 1960s Madison County, Iowa, who engages in an affair with a National Geographic photographer from Bellingham, Washington who is visiting Madison County in order to create a photographic essay on the covered bridges in the area. The novel is presented as a novelization of a true story, but it is in fact entirely fiction. However, the author has stated in an interview that there are strong similarities between the main character and himself.
The novel is one of the bestselling books of the twentieth century, with 50 million copies sold worldwide.
It was originally published in the UK under the title Love in Black and White.
The Bridges of Madison County was made into a 1995 film of the same name, adapted by Richard LaGravenese and directed by Clint Eastwood. It stars Eastwood and Meryl Streep.
An epilogue entitled A Thousand Country Roads was published in 2002. It tells the remainder of the two main characters’ story after their four-day affair. They never meet again, but their lives are interlocked until death.
According to San Francisco Chronicle the novel is “lyrical…sensuous and sensitive…a tale of lasting love”.

THE BRIDGES OF MADISON COUNTY

There are songs that come free from the blue-eyed grass, from the dust of a thousand country roads. This is one of them. In late afternoon, in the autumn of 1989, I’m at my desk, looking at a blinking cursor on the computer screen before me, and the telephone rings.

On the other end of the wire is a former Iowan named Michael Johnson. He lives in Florida now. A friend from Iowa has sent him one of my books. Michael Johnson has read it; his sister, Carolyn, has read it; and they have a story in which they think I might be interested. He is circumspect, refusing to say anything about the story, except that he and Carolyn are willing to travel to Iowa to talk with me about it.

That they are prepared to make such an effort intrigues me, in spite of my skepticism about such offers. So I agree to meet with them in Des Moines the following week. At a Holiday Inn near the airport, the introductions are made, awkwardness gradually declines, and the two of them sit across from me, evening coming down outside, light snow falling.

They extract a promise: If I decide not to write the story, I must agree never to disclose what transpired in Madison County, Iowa, in 1965 or other related events that followed over the next twenty-four years. All right, that’s reasonable. After all, it’s their story, not mine.

So I listen. I listen hard, and I ask hard questions. And they talk. On and on they talk. Carolyn cries openly at times, Michael struggles not to. They show me documents and magazine clippings and a set of journals written by their mother, Francesca.

Their decision to make this information public was a difficult one for them. The circumstances are delicate, involving their mother and, more tangentially, their father. Michael and Carolyn recognized that coming forth with the story might result in tawdry gossip and unkind debasement of whatever memories people have of Richard and Francesca Johnson.

Yet in a world where personal commitment in all of its forms seems to be shattering and love has become a matter of convenience, they both felt this remarkable tale was worth the telling. I believed then, and I believe even more strongly now, they were correct in their assessment.

In the course of my research and writing, I asked to meet with Michael and Carolyn three more times. On each occasion, and without complaint, they traveled to Iowa. Such was their eagerness to make sure the story was told accurately. Sometimes we merely talked; sometimes we slowly drove the roads of Madison County while they pointed out places having a significant role in the story.

In spite of the investigative effort, gaps remain. I have added a little of my own imagination in those instances, but only when I could make reasoned judgments flowing from the intimate familiarity with Francesca Johnson and Robert Kincaid I gained through my research. I am confident that I have come very close to what actually happened.

One major gap involves the exact details of a trip made across the northern United States by Kincaid. We knew he made this journey, based on a number of photographs that subsequently were published, a brief mention of it by Francesca Johnson in her journals, and handwritten notes he left with a magazine editor. Using these sources as my guide, I retraced what I believe was the path he took from Bellingham to Madison County in August of 1965. Driving toward Madison County at the end of my travels, I felt I had, in many ways, become Robert Kincaid.

Still, attempting to capture the essence of Kincaid was the most challenging part of my research and writing. He is an elusive figure. At times he seems rather ordinary. At other times ethereal, perhaps even spectral. In his work he was a consummate professional. Yet he saw himself as a peculiar kind of male animal becoming obsolete in a world given over to increasing amounts of organization. He once talked about the “merciless wail” of time in his head, and Francesca Johnson characterized him as living “in strange, haunted places, far back along the stems of Darwin’s logic.”

Two other intriguing questions are still unanswered. First, we have been unable to determine what became of Kincaid’s photographic files. Given the nature of his work, there must have been thousands, probably hundreds of thousands, of photographs. These never have been recovered. Our best guess—and this would be consistent with the way he saw himself and his place in the world—is that he destroyed them prior to his death.

The second question deals with his life from 1975 to 1982. Very little information is available. We know he earned a sparse living as a portrait photographer in Seattle for several years and continued to photograph the Puget Sound area. Other than that, we have nothing. One interesting note is that all letters mailed to him by the Social Security Administration and Veterans Administration were marked “Return to Sender” in his handwriting and sent back.

Preparing and writing this book has altered my world view, transformed the way I think, and, most of all, reduced my level of cynicism about what is possible in the arena of human relationships. Coming to know Francesca Johnson and Robert Kincaid as I have through my research, I find the boundaries of such relationships can be extended farther than I previously thought. Perhaps you will have the same experience in reading this story.

That will not be easy. In an increasingly callous world, we all exist with our own carapaces of scabbed-over sensibilities. Where great passion leaves off and mawkishness begins, I’m not sure. But our tendency to scoff at the possibility of the former and to label genuine and profound feelings as maudlin makes it difficult to enter the realm of gentleness required to understand the story of Francesca Johnson and Robert Kincaid. I know I had to overcome that tendency initially before I could begin writing.

If, however, you approach what follows with a willing suspension of disbelief, as Coleridge put it, I am confident you will experience what I have experienced. In the indifferent spaces of your heart, you may even find, as Francesca Johnson did, room to dance again.

On the morning of August 8, 1965, Robert Kincaid locked the door to his small two-room apartment on the third door of a rambling house in Bellingham, Washington. He carried a knapsack full of photography equipment and a suitcase down wooden stairs and through a hallway to the back, where his old Chevrolet pickup truck was parked in a space reserved for residents of the building.

Another knapsack, a medium-size ice chest, two tripods, cartons of Camel cigarettes, a Thermos, and a bag of fruit were already inside. In the truck box was a guitar case. Kincaid arranged the knapsacks on the seat and put the cooler and tripods on the floor. He climbed into the truck box and wedged the guitar case and suitcase into a corner of the box, bracing them with a spare tire lying on its side and securing both cases to the tire with a length of clothesline rope. Under the worn spare he shoved a black tarpaulin.

He stepped in behind the wheel, lit a Camel, and went through his mental checklist: two hundred rolls of assorted film, mostly slow-speed Kodachrome; tripods; cooler; three cameras and five lenses; jeans and khaki slacks; shirts; wearing photo vest. Okay. Anything else he could buy on the road if he had forgotten it.

Kincaid wore faded Levi’s, well-used Red Wing field boots, a khaki shirt, and orange suspenders. On his wide leather belt was fastened a Swiss Army knife in its own case.

He looked at his watch: eight-seventeen. The truck started on the second try, and he backed out, shifted gears, and moved slowly down the alley under hazy sun. Through the streets of Bellingham he went, heading south on Washington 11, running along the coast of Puget Sound for a few miles, then following the highway as it swung east a little before meeting U.S. Route 20.

Turning into the sun, he began the long, winding drive through the Cascades. He liked this country and felt unpressed, stopping now and then to make notes about interesting possibilities for future expeditions or to shoot what he called “memory snapshots.” The purpose of these cursory photographs was to remind him of places he might want to visit again and approach more seriously. In late afternoon he turned north at Spokane, picking up U.S. Route 2, which would take him halfway across the northern United States to Duluth, Minnesota.

He wished for the thousandth time in his life that he had a dog, a golden retriever, maybe, for travels like this and to keep him company at home. But he was frequently away, overseas much of the time, and it would not be fair to the animal. Still, he thought about it anyway. In a few years he would be getting too old for the hard fieldwork. “I might get a dog then,” he said to the coniferous green rolling by his truck window.