Главная / Исторические любовные романы / The Betrayal of the Blood Lily 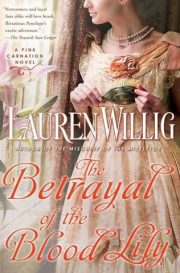 Лорен Уиллиг - The Betrayal of the Blood Lily краткое содержание

Willig switches the setting of her Pink Carnation series from eighteenth-century England to colonial India in the sixth installment, which finds wild Penelope Deveraux married off to Lord Frederick Staines after the two are caught in a compromising position. Though they connect physically, the spirited, witty Penelope and the pompous, hedonistic Freddy have little in common. Freddy’s new position as special envoy to an English ambassador has brought them both to India, where rumors of intrigue involving a French spy known as the Marigold are afoot. Already floundering in her loveless marriage, Penelope sets out to unmask the spy, suspecting that their serious escort, Captain Alex Reid, might be the culprit. But as Penelope grows closer to Alex, her suspicions give way to a deep mutual attraction. Willig brings colonial India to vibrant life through Penelope’s eyes, and the sparks flying between Penelope and Alex generate plenty of heat. By taking the story to India, Willig injects a new energy in her already thriving, thrilling series, and presents the best entry to date.

The Betrayal of the Blood Lily

the best of all possible roommates

at the best of all possible Yales

Six years ago, two unsuspecting professors hired me as their teaching assistant for a class on the second British Empire. Little did they realize what they were starting. Huge thanks go to Professors Susan Pedersen and Robert Travers for introducing me to early-nineteenth-century India, providing the backbone for this book.

Oodles of thanks go to my editor, for hopping on board with taking the series to a whole new continent; to my agent, for making this book and all the others possible; and to all the folks at Dutton and NAL, for doing the magical things they do, especially with the covers. Have I mentioned recently that I love these covers?

As always, much love to my family, for putting up with incoherent babble about character, plot, and cobras; to Nancy, Abby, Claudia, Liz, Jenny, Weatherly, and Emily, for making time for dramas both fictional and personal; and to my Tweedos (you know who you are), for cocktails and an ever more absurd collection of running jokes (no one expects Gold Ascot Man!), many of which will one day undoubtedly make their way between the pages of these books. A good running joke is a terrible thing to waste.

Thanks also go to my summerhouse girls (and guy), Abby, Lara, Sarah, Stephanie, and Matt, for providing me with a writer’s retreat during the week and plenty of new material on the weekends. The first hundred pages of this book belong to you.

The biggest thank-you of all goes out to my readers. Without you, this book wouldn’t even have a title (or at least not the title it does). Thanks go to everyone who suggested flowers and titles during the duration of Pink VI Flower Idol, with special thanks due to Brie Porter and Jennifer Klouse for coming up with the Blood Lily, a flower that suits Penelope to a tee, and to Pamela for the euphonious noun “betrayal.” This title was an ensemble effort and all the better for it.

Thank you for making the time to chime in on my Web site, pop by a reading, or drop me an e-mail. Most of all, thank you for bringing my characters to life by believing in them. Keep all that good energy coming!

As the waiter set the plate down in front of me, I could see that the tomato had sunk down into the cheese, creating an edible sculpture in the shape of a heart. It seemed appropriate for the occasion.

Outside, it was the sort of crispy, clear winter day that you get occasionally even in England, beautiful and sunny, without a hint of a cloud. It was the season of white lace doilies and heart-shaped boxes of chocolates and teddy bears that squawked mawkish sentiments when you pressed their distended tummies. In other words, it was almost Valentine’s Day, and I had decided to do a little matchmaking of my own. Why should Cupid have all the fun? My boyfriend’s sister was desperately in need of a romantic intervention.

Boyfriend. It still boggled my mind that I had one. I was very aware of Colin’s arm draped casually over the back of my chair, as though it had always belonged there. It gave me a weird little thrill to realize that we were the established couple here, beaming benevolently upon the singles.

It was hard to remember that a mere three months ago both my personal and professional life had been scraping rock bottom. Like many a historian before me, I had come to England on academic pilgrimage, worshipping at that altar of scholarship, the British Library, with its multitudinous manuscript collections, in the hopes that the great god of the archives would prove merciful and shower footnotes down upon me. Surely, I had thought with all the boundless optimism of the fourth-year graduate student, the mere fact that scholars had been through those documents time and again didn’t necessarily mean that I wouldn’t find anything new. Those scholars hadn’t been me .

Which, in retrospect, probably meant that they were better qualified, but that only occurred to me once it was already too late to turn back.

I should have known something was wrong when my advisor’s parting words were Good luck. To his credit, he had — very gently — suggested that I might want to consider a different sort of topic. But I didn’t want to consider another topic. I was madly in love with my topic: “Aristocratic Espionage during the Wars with France, 1789- 1815.” It had dash, it had swash, it had buckle.

It also had no primary sources. My life would have been much easier had I followed my advisor’s suggestion and looked more closely into the careers of those men who spied for England under government auspices, and thus might reasonably be expected to show up in government dispatches and payrolls. That was far too easy. What I intended to unravel were the networks of independent adventurers, those daring souls who had struck out on their own for King and country, using their family connections and the benefit of independent income to create elaborate bouquets of flower-named spies: the League of the Scarlet Pimpernel, the League of the Purple Gentian, and finally, the most intriguing of the them all, the League of the Pink Carnation.

You can see where this is going, can’t you? I had arrived in London in September. By November, my fingernails were all gone, chewed to the quick. I had no footnotes; I had no dissertation. I was stranded in a country where the sun sets at four and I was never ever going to get an academic job, much less a tenure-track one.

They always say execution clarifies the mind wonderfully. So does the prospect of law school. I made one last desperate attempt. I sent out letters to all the known descendants of the Purple Gentian and the Scarlet Pimpernel, politely asking if I might please, pretty, pretty please, have access to any family papers they didn’t mind showing to a humble little Harvard student.

Have I mentioned that Colin is a direct descendant of Lord Richard Selwick, also known as the Purple Gentian?

Three months later, I was still reeling over my good fortune. I had enough footnotes to make my advisor’s eyes go pop; I had been given access to archival material the likes of which I had never dared to dream existed; and I was dating someone who could make my heart do a little tap dance simply by showing up in the room. I was so happy, it was scary.

Oh, I still suffered from the usual slings and arrows to which flesh is heir, like the Tube breaking down on me every other morning and the British Library cafeteria serving potato soup three days in a row. There were also the looming clouds of larger worries, like the fact that, although Colin claimed to be writing a spy novel, I still wasn’t convinced that his so-called research on the subject was entirely fictional in nature.

Colin’s great-great-great-grandparents had founded a school for spies; from what little he had let slip, his father had carried on in the family tradition, under the auspices of the army. Not to mention that Colin had been more than usually resistant to my poking around in his family’s past. Nothing more than that fabled British reticence? Perhaps. But I couldn’t quite exorcise the nagging feeling that there might be something more to it. The spy novel story was just a little too pat. If you were a spy looking for a cover story, wouldn’t the best cover be just that, a story? On the other hand, maybe I was just out-clevering myself, building up complications where there were none. Not like I’d ever done that to myself before.

When Colin hit the Times bestseller list, I’d be the first in line applauding.

Even leaving aside all the cloak-and-dagger stuff, there were practical problems on the horizon. Colin’s life was based three quarters in Sussex and one quarter in London, while I was due to return to Cambridge — the American one — in May.

But it was only February now. May felt a very long time away. I could deal with May when I got there. And in the meantime, I had extended visits with Colin both in London and Sussex, a grilled cheese and tomato sandwich on my plate, and a full cup of coffee in front of me, with free refills to come. Life was good. Life was very, very good.

It only seemed fair to pass some of the happiness along.

I beamed across the table at Colin’s sister, Serena, who was doing a very good job of toying with her salad without actually eating any of it. Next to her, Colin’s friend Martin was devouring his pasta Bolognese as though personally determined to eat enough for both of them.

That wasn’t exactly how I had planned for lunch to go when I decided to take Serena up as my personal project.

It wasn’t that Serena was frumpy or dowdy or any of the usual devices of those teen movies where the more popular girl takes on the plainer one and makes her into prom queen. When it came to sartorial sense, Serena was several steps ahead of me. She had that fragile thinness so beloved of fashion magazines and whoever those cruel people are who create designer jeans: long, elegant bones with only the bare rudiments of skin over them. Her hair was long and soft and shiny and naturally straight and her face had the sorts of interesting hollows one gets from weighing about twenty percent below one’s recommended body weight. She was the sort of girl whose hair never frizzes and whose skirt never gets rumpled.