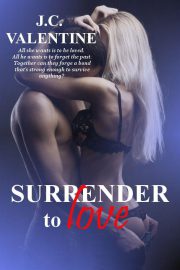 After finding herself out of luck and out of love, Patricia Jacobs has written off the male species. No one but her father has ever given her the love and devotion she knows she deserves, and she’s sick and tired of it. Until she collides, literally, with a man whose devastating smile and seductive charm that should be considered illegal, destroys her plans. He’s everything she’s ever dreamed of in a man: handsome, intelligent, successful, they share a love of cars and best of all; he looks at her like she’s his light in the dark. What more could a girl ask for?
Jonathon Bradshaw, destroyed by a past that has haunted his every waking moment for the last five years, isn’t looking for a serious relationship, until he meets Patricia. Sweet, saucy and as hot as the summer is long, Jon can’t deny the draw he has toward her. For the first time, he has hope. Determined to shake the ghosts of his past, Jon focuses on forging a future with Patti, but he’s always been a master at standing in his own way.
When Jon’s past refuses to be forgotten, will Patti be able to live with the truth about the man who’s stolen her heart?

“Never be afraid of a scar. It simply means you were stronger than whatever tried to hurt you.”

“Patti? Shit!” Kyle flew off the bed, scooping up a pair of discarded jeans and stumbling out of the bedroom as he tried to dress himself. “Patti, wait!”

Charging into the living room, Patti scooped up her purse as she blew through the front door. She fumbled for the right key, unable to see clearly through the red haze covering her eyes. “Screw you, Kyle!” she shouted over her shoulder. A couple leaped out of her way as she stormed down the stairs, and cut them off on the sidewalk heading to her car.

“It’s not what you think!” Kyle called after her, even as he struggled to hoist up his jeans. He jogged up behind her and slammed his hand down on the door of her car, just as she began to open it, forcing it shut.

“Then what is it?” Patti shouted, rounding on him. She felt the heat of her fury boiling in her blood as she fought with everything she had in her not to slaughter him like the pig he was. “Was that not a woman I just caught you ramming your dick into? Huh?” She shoved him, momentarily satisfied when he stumbled back. It wasn’t an easy feat to manage considering he stood several inches taller than she did and outweighed her by at least sixty pounds. Hell hath no fury, she laughed to herself.

“Baby, come on,” Kyle said as if he were trying to calm a vicious animal. “You know I love you.” He stepped into her and encircled her waist. “She means nothing to me, baby doll. It was a mistake.”

Patti silently fumed as Kyle drew her up against his bare chest and kissed the top of her head. She didn’t have to close her eyes to envision Kyle’s bare ass flexing as he pounded into the faceless woman. Every detail was clear as a damn bell. The only thing notable about the woman was the glimpse Patti caught of her long, lean legs wrapped firmly around Kyle’s hips before Patti grabbed the only weapon available to her—a pair of tacky stripper heels—and whipped them as hard as she could at the back of Kyle’s head.

She stayed only long enough to make sure she hit her target before getting the hell out of Dodge. The last thing she expected was to have the lying cheat run after her. Putting in overtime at the office? What an idiot she was.

Balling her hands into fists at her sides, Patti squeezed her eyes shut as Kyle continued to feed sweet nothings in her ear. Fuck, she could smell the bitch’s perfume on his skin, and it was designer knock-off. Talk about adding insult to injury.

Unable to take it anymore, Patti jolted back. “Don’t touch me,” she snarled. “Don’t you ever put your hands on me again.” She shoved against his chest once more, and he allowed her to set him back a few steps.

“What the hell is your problem, Patti?” Kyle’s face screwed up in disgust.

“Is that a serious question? You’re my problem, Kyle. Catching you between another woman’s legs is my problem!”

“I said it was a mistake! What more do you want from me?” he shouted and held out his arms, his wrists facing the sky. “Do I need to give you a bucket of my blood for you to understand that I didn’t mean it? Shit, I’m sorry!”

Patti rolled her eyes at his dramatic display. “Oh, please. You love yourself too much to bleed for anyone, much less me. And don’t for one second think I believe that you’re sorry about a damn thing.” She pointed her finger in his face and glared. “You showed your true colors today, buster. You’re lucky I didn’t go Lorena Bobbitt on your ass.”

Kyle took another step back, eying her warily. “You’re fucking crazy. You don’t threaten a man’s dick, ever.”

Patti couldn’t hold back her laugh. “There’s not much there to threaten.”

Kyle glared and threw up his hands. “Whatever, bitch. Consider yourself dumped.”

When he started to walk away, Patti felt her face heat and her body vibrate. She turned to face his retreating back. “Consider this, Kyle. The next time you find yourself walking across the street, be sure to look both ways. You never know when a tetchy ex-girlfriend might suddenly develop a lead foot.”

“Fucking crazy,” Kyle shouted back at her, but Patti was already sliding in behind the wheel of her car. Firing up the engine, she revved the motor a few times, the aggressive purr of her ’68 Pontiac GTO drawing attention from a few admiring passersby, and then peeled out into traffic.

Evil, murderous thoughts flipped through her mind as she took hairpin turns that her more subdued Toyota would never survive. Once she hit the expressway on-ramp, she pressed the pedal to the floorboard, opening the engine up. Some people turned to cigarettes to calm their nerves, some alcohol. Patti’s drug of choice had always been speed—ever since her father towed home the rusted out hunk of metal and set it down in their driveway, declaring it a father-daughter project.

It took the better half of her formative years, literally putting their blood, sweat, and tears into bringing it back to life, but by her sixteenth birthday they’d finally gotten the clunker up and running. It was a time she looked back on fondly, and after her father passed away a few years later, driving the car had become the only way she could find relief from whatever crap the world tossed her way. When she fitted herself behind that wheel, listening to it roar to life, feeling the powerful engine rumble beneath her, she could almost imagine her father sitting beside her, enjoying the ride, too.

For old time’s sake, Patti flipped on the radio and popped in her favorite CD. As she coasted toward her exit, the first strains of the piano started and she began to sing her favorite Whitesnake song. She nodded and hummed along as she slowed at the stoplight. When “Here I go Again” reached its hook, her fingers tapped out the drums and her heart beat a tempo that matched the mood set by the music. Not only did she love her 80s hair bands, they were her feel good, heartbreak remedy.

By the time she made it into the office her mood was a little less dark than it had been. She took a moment to serve herself a cup of coffee before settling in behind her desk. She spent the bulk of her morning getting lost in numbers, one of her favorite things to do, and before she knew it, it was time for lunch.

Leaning down, she pulled her sack lunch from the bottom desk drawer and unwrapped the flattened bologna and cheese sandwich. Halfway through her meal, Mr. Peterson cracked the door to his office and leaned his head out.

“Patricia, good. I’m glad you’re still here.” His expression was pinched. “When you’re finished with your lunch, I’d like to see you in my office.”

Patti nodded, sucking bits of cheese and bread from the backs of her teeth. “Sure thing, Mr. Peterson.” It wasn’t unusual for her boss to ask her to his office, but the look on his face made the fine hairs on the back of her neck stand at attention.

Rushing through the rest of her sandwich and washing it down with the last of her Diet Coke, Patti balled up her garbage and tossed it in the trash as she crossed the office. Pausing outside the closed door, she inhaled a steeling breath, rapped on the door once, and let herself inside.

Mr. Peterson sat hard at work at his desk, the pen in his hand working feverishly across the stack of papers laid out before him. “Have a seat.” He didn’t bother to look up from his task.

Easing down on the stiff chair, Patti sat almost rigidly upright while she waited for him to begin. Nerves began to settle in and when Mr. Peterson cleared his throat, she jumped.

“Patti,” he started, setting his pen aside and folding his hands in front of him. “You’ve been with Peterson and Wendle for a long time. Your record here has been great, your work phenomenal. I’m not sure you’ve ever even taken a sick day. What I am trying to say is that, we appreciate everything you have done to help the company grow in today’s market.”

A proud smile spread across her face. “Thank you, Mr. Peterson. That means a lot to me.”

Mr. Peterson shifted in his chair, his hands finding the lapels of his blazer and smoothing them down his barreled chest. He cleared his throat. “What I have to tell you is difficult, and I’m afraid there is no easy way to say it, so I’ll be blunt.” He looked up, fixing dark, serious eyes on her. “Patti, we’re letting you go.”

Eyes widening in shock, all Patti could do was look down at her hands clasped tightly in her lap. Her fingers were turning white. “But you said…” Her brows pulled down. “I don’t understand.”

Mr. Peterson pulled open one of his desk drawers as he spoke. “I know this comes as a shock. However, as the company grows and expands and we search for new ways to streamline its core structure, we find there are certain areas where we could stand to cut back.” He stretched out his arm to her, a crisp white envelope clutched between his thick fingers. “We just don’t need two accountants on the payroll.”

Patti blinked several times before reaching out to accept the envelope. “But Lisa has only been working here for a little over a year,” she said, baffled. “I thought cuts were usually made according to last hired first fired.”

Mr. Peterson grabbed for his pen, rolling it between his fingers. “That’s how some businesses operate, yes, but in this case, it was a matter of who cost the company more. You’ve been with us for five years, Ms. Jacobs. You’ve maxed out your raises, have full health care, work overtime most days, and you don’t take any vacations. The fact of the matter is we just can’t afford you.”