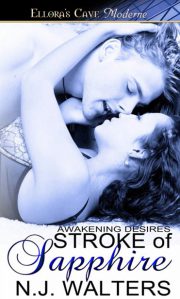 When Sapphire Jewel turns to him on the final evening he’s assigned to protect her, ex-Army Ranger and security expert Jake Knight sweeps her into bed. His personality and his profession have shaped him into a man who needs to be in control of all aspects of his life—especially in the bedroom. He’s not into the whole dominant/submission BDSM stuff, but he does need to be the dominant force when it comes to physical relationships. Fearing his sexual demands are too much for her to handle, Jake does the only thing he can to protect her—he leaves her.
Sapphire is in love with her bodyguard. One night of intense, passionate sex has him running for the door and she doesn’t know why. When Jake unexpectedly shows up in her life again, she must decide if she can live with the sexual demands he’ll make of her. But most of all, she must decide if she can once again risk her heart.

As always, thank you to my amazing husband who shows me every day what true love is.

Jake Knight sat alone in the dark corner of the posh restaurant and stared at the woman seated on the other side of the room. The dim lighting surrounded her like a halo, allowing him to see her perfectly. Not that he didn’t already know what she looked like, but her appearance was different tonight. More sensual and seductive.

He shifted on his seat, trying to find a more comfortable position, but it just wasn’t possible. His dick was standing at attention, ready and willing to jump into action. But Jake ignored his blatant arousal and eased more into the shadows, content to watch, for now.

Her lips were painted a deep red, like ripe cherries. It gave a man all kinds of ideas. He’d love to nibble on those luscious lips, even better, he’d love to see them wrapped around his swollen cock.

Wasn’t going to happen. He broke out in a sweat when she licked her bottom lip and laughed at something her male companion said.

Her long, curly hair was pinned up in some kind of fancy style that seemed to defy gravity, leaving the sensitive curve of her neck bare. His shoulders tensed and he had to fight the urge to stalk over to her table, toss her over his shoulder and carry her off into the night.

But she wasn’t for him.

No, Sapphire Jewel was more than a decade younger than he, fresh and filled with an innocence that he’d lost years ago, that is, if he ever even had it. He felt old and jaded, which was why he’d broken things off with her a few weeks back.

Why then was he following her when she went out at night? He was verging on becoming a stalker, the kind of guy he hunted down and helped the cops put away. He much preferred to think of himself as a protector.

She was too damn innocent for her own good. Just the fact that she was on a date with Ivan Gregor was proof enough. The guy was a shark, a real estate developer who it was whispered regularly bribed city officials to make sure his projects went ahead with no difficulties. It was also rumored he’d recently done business with the Russian mafia. The man had friends in both high and low places.

What the hell was Sapphire doing with a man like Gregor?

Right now, she was safe enough, eating her dinner and sipping wine in a fancy restaurant. But what would happen after they left? No way was Jake leaving that to chance.

Plus, they were practically family, after all. His brother was marrying her sister. John and Topaz were tying the knot in a little over two months. Their path to the altar hadn’t been an easy one and John had resorted to kidnapping Topaz so she’d spend some uninterrupted time with him.

But their situation was different, he reminded himself. Topaz was older, and a lot more sophisticated then her younger sister. He remembered his advice to John when his brother had his doubts if he and Topaz would ever be together—we know how to fight for what we want, how to get around barriers and gain the objective. We don’t give up. Ever.

Good advice, too bad it didn’t apply in his situation. Sapphire was too young, too innocent, for a jaded soul like him.

He watched, hands clenched at his sides, his expensive steak dinner going cold, as Gregor topped up her wine glass. Sapphire smiled at him and nodded her thanks.

Could have been you, a quiet voice in the back of his head reminded him. He tried not to listen to that nagging voice. He could be the one enjoying a quiet dinner with her. Sapphire had been attracted to him and he’d certainly wanted her in a way he’d never wanted another woman.

He relaxed around her and she made him believe that anything was possible, even though he knew damn well that was a lie. Life was what it was and bad things happened to good people. His twenty years in the army and several years as a security specialist and bodyguard had shown him that.

As he watched her, she shifted in her chair, crossing her legs. Her skirt slid up, exposing a long length of smooth, silky leg. She had killer legs and the four-inch heels she was wearing made them appear even longer. He’d had those legs wrapped around his hips.

A muscle flexed in his jaw as he ground his back teeth together. He could almost feel her hot pussy closing around his hard cock, smell her light, floral perfume and the musky scent of her arousal mixed together, hear her breathy moans as she cried out his name.

He swallowed hard but didn’t look away. He couldn’t. He’d had her and he’d thrown her away. The fact that it was for her own good didn’t lessen the pain or the sense of loss that had consumed him every waking hour since.

The blouse she was wearing was silky, the front dipping low enough to show a hint of cleavage. And Sapphire had plenty to showcase. She wasn’t one of your skinny New York-model wannabes. She had curves that made any man who saw her sit up and take notice.

With her waist-length curly black hair, heart-shaped face and killer curves, Sapphire was stunningly beautiful. Not in a conventional, modern way, more like a throwback to the pinup girls from the forties and fifties.

But she hadn’t dressed that provocatively when they’d been together. Granted, he’d been her bodyguard and not her boyfriend at the time, but he’d come to know her well in the time they’d spent together. No, this was a new development, one that coincided with his walking away from her.

That was no accident. There was no denying that Sapphire had changed since he’d rolled out of her bed and left her. It was a hell of a thing for him to do to her and he knew he’d acted like a first-class bastard, but he’d done what he felt he’d had to do.

He’d done the tough things—the right things—all his life, but he’d never done anything that had shredded his soul the way that leaving Sapphire had.

It had changed them both and not in a good way.

He swore under his breath and scowled at the waiter who hovered next to his table.

“Can I get you anything else, sir?” The waiter swallowed hard, making his buttoned collar and tie appear way too tight.

“Coffee and my bill.” Jake wanted to be ready to leave the moment Sapphire and her date did.

“Right away, sir.” Jake barely registered the waiter leaving him. All his attention was on Sapphire. She’d done something to her eyes, some trick of makeup that women seemed to instinctually know how to do. It made them appear smoky and sexy, even darker than usual.

The waiter reappeared with coffee and a bill. Jake handed the man his credit card and he hurried off to finish the transaction. Jake could have told him not to rush. He wasn’t leaving until Sapphire did. He picked up his cup and sipped his coffee, enjoying the strong, dark brew. Before he’d had a chance to set his cup back on the table, the waiter was back. Jake looked over the charges, added a decent tip and signed the slip. The waiter melted away from the shadows, leaving him alone once again.

In the weeks since he’d left her, Sapphire had struck out on her own, getting her own apartment. She’d also gone out on a half-dozen dates, with a half-dozen different guys. That was totally out of character for the woman he’d come to know well over the past year. Being her personal bodyguard for several months had allowed him unimpeded access to her personal life 24/7.

Sapphire was a quiet woman who enjoyed her work and her family. When she wasn’t with her sisters or in her jewelry-design studio, she liked to putter with her small balcony garden, read and watch old movies.

When she went out it was usually with a group of her friends or with family. What was she doing dating all these guys? What was she trying to prove?

It struck him like a thunderbolt to the heart. This was his fault. He was responsible for the change in her. Pain lanced through him as he thought back to that fateful night that had changed both their lives…

“I can’t believe the trial is finally over and our lives can get back to normal.” Sapphire smiled at him as she dropped her small suitcase just inside the front door of the apartment she shared with her sister. But Topaz wasn’t here. She was off in a secluded cabin with his brother John. They were alone.

Jake closed and locked the door. His job as bodyguard was finished. He really had no reason to stay and knew he should take himself home. But he didn’t want to leave her.

“Do you want some coffee? Or maybe something stronger?” Her dark-brown eyes appeared even darker tonight. He knew she had to be tired. It had been a long few months and she hadn’t been resting well.

He was a bastard for not leaving immediately and letting her go to bed. His brain cells scrambled at the mere mention of the word “bed” in association with Sapphire. He’d spent many a long night lying awake, imagining what she’d look like naked and spread across her bed, waiting for him to take her. It made his dick hard to even think about it.

Not wanting her to see his arousal, he turned his back and walked over by her dining room window and peered out into the night. Lights of all shapes and sizes dotted the skyline. New York was alive and thriving. “I’m fine.”

He sensed her behind him before he felt the light brush of her hand over his back. He swallowed hard but didn’t turn around. No telling what he would do if he did.