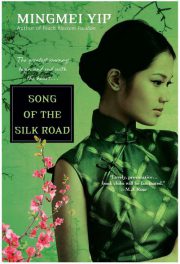 In this richly imaginative novel, Mingmei Yip—author of Peach Blossom Pavilion and Petals from the Sky—follows one woman’s daunting journey along China’s fabled Silk Road.
As a girl growing up in Hong Kong, Lily Lin was captivated by photographs of the desert—its long, lonely vistas and shifting sand dunes. Now living in New York, Lily is struggling to finish her graduate degree when she receives an astonishing offer. An aunt she never knew existed will pay Lily a huge sum to travel across China’s desolate Taklamakan Desert—and carry out a series of tasks along the way.
Intrigued, Lily accepts. Her assignments range from the dangerous to the bizarre. Lily must seduce a monk. She must scrape a piece of clay from the famous Terracotta Warriors, and climb the Mountains of Heaven to gather a rare herb. At Xian, her first stop, Lily meets Alex, a young American with whom she forms a powerful connection. And soon, she faces revelations that will redefine her past, her destiny, and the shocking truth behind her aunt’s motivations…
Powerful and eloquent, Song of the Silk Road is a captivating story of self-discovery, resonant with the mysteries of its haunting, exotic landscape.
http://www.youtube.com/watch?v=cm5QyMsylXQ

SONG OF THE SILK ROAD

To Geoffrey: Our life together, like the river, flows on endlessly day and night….

Even though the sky had no trace of me,

I knew I’d flown through it.

In time past, I was a beautiful woman.

Whenever I smiled, I knew I would,

Writing this novel, I owe my first expression of utmost gratitude to my husband, Geoffrey Redmond, an endocrinologist and scholar of ancient China whose most recent books are It’s Your Hormones and Science and Asian Spiritual Traditions. Geoffrey’s love and support are like an oasis in the desert—nurturing and protective amidst the infinite mystery of life. I feel a perfect balance of yin and yang in my life because of him.

Next I must thank my agent, Susan Crawford, and the team at Kensington Books: my editor, Audrey LaFehr, and also Karen Auerbach, Maureen Cuddy, and Martin Biro.

Like the pulling of silk in tai chi, the way of the writer, weaving and polishing, is never ending—and there are so many to thank along the way:

Teryle Ciaccia, my good friend and fellow tai chi instructor, whose elegant posture of “pulling silk” has charmed and kept me inspired for all the years that I’ve known her.

Eugenia Oi Yan Yau and her husband, Jose Santos, who are always there to offer a helping hand.

Lewis Frumkes, who graciously invited me to many literary events where I had the chance to meet some of the great writers of our times.

My fellow Kensington author Kate Douglas, who generously took time from writing her best-selling novels to advise me on the practical challenges of writing.

Sharon Cousins, for advocating solar cooking and telling me she loves my writing.

Hannelore Hahn and Elizabeth Julia Stoumen, of The International Women’s Writing Guild, for their long support of women writers.

Again, last but not least, my parents, who let my imagination run wild and always believed in my dreams.

Maybe they’re right. After losing both my parents at twenty-eight, I was abandoned—penniless—into this treacherous Ten Thousand Miles of Red Dust.

Or so I had thought.

Then a year later I received a letter from a law firm in Manhattan, Mills and Mann, informing me that I was to be given a sum of money. In fact, a very large sum of money.

But from whom? And why? Since I had to max out my credit cards just to lay my parents in thin coffins and watch them—with my hard-earned money—turn into ashes.

Wow. I had to use all my willpower to stifle my about-to-shoot-out, uncontrollable, deliriously happy laughter to be able to continue to read.

My benefactress was someone by the name of Mindy Madison, supposedly my aunt from my mother’s side. Neither of my parents had ever mentioned any aunt in this world—or the next one.

So where could this Mindy Madison have come from?

Then a light went on in my head. Wasn’t this too good to be true? Fishy? Like a clichéd plot in a cheap novel?

Without further thought, but much reluctance, I stuffed the letter under my novel-in-progress manuscript on the desk and tried to push the whole thing out of my mind.

But, as the Chinese also say: “When wealth comes, its force will push you against the wall.”

Two days later, after I arrived home from waitressing at Shun Lee Palace—an overpriced Chinese restaurant in midtown Manhattan—the blinking red light in my dark apartment caught my attention. I pressed the phone’s button and the room was immediately filled with a pleasant male voice: “Hello, I’m David Mann from Mills and Mann Associates. This is for Miss Lily Lin concerning a large sum of money from her aunt, Mindy Madison. Please contact us as soon as possible so we can process this matter promptly. We look forward to meeting with Miss Lin. Thanks.”

The next day, restless with nervous energy, I was sitting across from two impeccably dressed attorneys in a posh law firm located in one of the most expensive districts in Manhattan, listening to a most amazing, stranger-than-fantasy-fiction speech.

“Yes, the whole thing is real, Miss Lin. You’re not dreaming, but about to be granted three million dollars.” David Mann, a thirtyish lanky man with blond hair, assured me with his slick lawyer’s voice. In this office filled with rows of bricklike books and angular, deep brown furniture, his gleaming eyes were the only two bright spots.

“But there is more. Don’t think it’s just going to drop into your hands,” admonished his partner, the fiftyish, Margaret Thatcher look-alike Margaret Mills. “Your aunt—apparently she’s quite an adventurer—specified that you have to take on a long journey in China, along the Silk Road. This is very specific—you must retrace the same routes that she took, do the same things that she did. Until you complete this, the three million dollars will be waiting for you in the bank.” She paused to frown at some document lying like a corpse on the desk. Then she added, in a tone of disapproval, “However, you do get fifty thousand dollars in advance for the preparation of your trip.”

Still in shock, I asked numbly, “How long is the trip?”

Mann’s voice piped up from the honey jar. “It specifies in the document that it will take somewhere from to six to eight months.”

I did a quick calculation in my head: Would the fifty thousand dollars last six or eight months in China? Of course. Most Chinese couldn’t even make this in their whole life!

I watched as the two yin–yang creatures—one heavy and stuffy, the other slim and slick—went on to explain details: The Mills and Mann firm was only acting as intermediary; the matter was being taken care of by another law firm in Beijing. Therefore, if I agreed to go ahead with this improbable business, I also needed to meet with a Mr. Lo in Beijing. More details followed but did not make much sense to me. Finally, when their long-winded harangue, delivered in a lawyerly monotone, was finished, I sat dumbfounded.

David Mann flashed a row of neat, whitened teeth, his blue eyes sparkling like two sapphires. “So, Miss Lin, are you willing to accept your aunt’s terms and take on this journey of a thousand miles?”

Should I accept such an offer? For a moment, I had no answer. But, putting aside the bizarre stipulations from a total stranger, supposedly my aunt, could anyone resist a seven-figure fortune? Certainly not a yet-to-be published writer and on-the-side waitress. So I put on a smile especially aimed at the impossible windfall.

I would certainly take the fifty thousand up front and then… maybe I could even cheat my way out later, who knows?

My mind was racing; I had no idea what I would be getting myself into. But I also did not want to take any chances on this dropped-from-the-sky bonanza. So I nodded emphatically. “Absolutely. I have always wanted to be an adventurer, and I certainly have no intention of turning down this three-million-dollar fortune.”

Margaret Mills immediately pushed the document across the desk for me to sign. With my slightly trembling hand, I scribbled on the death-pale paper my name, Lily, which means Beautiful in Chinese, also a homonym with Fortune, then my family name, Lin, which means Forest or Abundance.

Mills took the document back, and the duo reached out to vigorously shake my hand. “Congratulations, Miss Lin!”

Now suddenly the tomblike office looked almost like a sunny garden. Even the middle-aged, Margaret Thatcher look-alike Margaret Mills could now pass as handsome. I studied her officious expression while remembering the Spanish foreign minister’s speech to the other Margaret: “Madame, I was prepared for your intelligence, but not for your beauty!”

With the images of the two Margarets, one in Britain and the other right before my eyes, I tried very hard to suppress a chuckle.

The Manhattan Margaret spoke again. “Miss Lin, these things take time to process. Come back next week and we’ll have the fifty-thousand-dollar check waiting for you.”

David Mann added, “You will be a rich woman. We will be happy to help you with your future legal affairs.”

At four-thirty, I stood on the street outside the law firm, dizzy and disoriented by my sudden change of fortune. The sun was bright and warm, while the sparkling air matched my rising mood. Though the world outside looked unchanged with people hurrying and cars inching forward, the world inside me was like an hourglass suddenly turned upside down. I felt ambushed from all sides, even though no one paid me any mind. I kept thinking of the strange demands by this strange supposed aunt, who had never even existed for me in my entire twenty-nine years. Not to mention the unbearable lightness of a small piece of paper with “$50,000” written on it, soon to be sitting arrogantly yet happily in my purse!