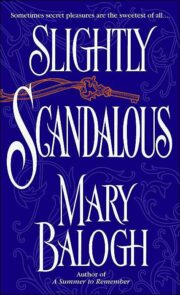 By the time she went to bed, Lady Freyja Bedwyn was in about as bad a mood as it was possible to be in. She dismissed her maid though a truckle bed had been set up in her room and the girl had been preparing to sleep on it. But Alice snored, and Freyja had no wish to sleep with a pillow wrapped about her head and pressed to both ears merely so that the proprieties might be observed.
«But his grace gave specific instructions, my lady,» the girl reminded her timidly.

By the time she went to bed, Lady Freyja Bedwyn was in about as bad a mood as it was possible to be in. She dismissed her maid though a truckle bed had been set up in her room and the girl had been preparing to sleep on it. But Alice snored, and Freyja had no wish to sleep with a pillow wrapped about her head and pressed to both ears merely so that the proprieties might be observed.

"But his grace gave specific instructions, my lady," the girl reminded her timidly.

"In whose service are you employed?" Freyja asked, her tone quelling. "The Duke of Bewcastle's or mine?"

Alice looked at her anxiously as if she suspected that it was a trick question-as well she might. Although she was Freyja's maid, it was the Duke of Bewcastle, Freyja's eldest brother, who paid her salary. And he had given her instructions that she was not to move from her lady's side night or day during the journey from Grandmaison Park in Leicestershire to Lady Holt-Barron's lodgings on the Circus in Bath. He did not like his sisters traveling alone.

"Then leave." Freyja pointed at the door.

Alice looked at it dubiously. "There is no lock on it, my lady," she said.

"And if there are intruders during the night, you are going to protect me from harm?" Freyja asked scornfully. "It would more likely be the other way around."

Alice looked pained, but she had no choice but to leave.

And so Freyja was left in sole possession of a second-rate room in a second-rate inn with no servant in attendance-and no lock on the door. And in possession too of a thoroughly bad temper.

Bath was not a destination to inspire excited anticipation in her bosom. It was a fine spa and had once attracted the crème de la crème of English society. But no longer. It was now the genteel gathering place of the elderly and infirm and those with no better place to go-like her. She had accepted an invitation to spend a month or two with Lady Holt-Barron and her daughter Charlotte. Charlotte was a friend of Freyja's though by no means a bosom bow. Under ordinary circumstances Freyja would have politely declined the invitation.

These were not ordinary circumstances.

She had just been in Leicestershire, visiting her ailing grandmother at Grandmaison Park and attending the wedding there of her brother Rannulf to Judith Law. She was to have returned home to Lindsey Hall in Hampshire with Wulfric-the duke-and Alleyne and Morgan, her younger brother and sister. But the prospect of being there at this particular time had proved quite intolerable to her and so she had seized upon the only excuse that had presented itself not to return home quite yet.

It was shameful indeed to be afraid to return to one's own home. Freyja bared her teeth as she climbed into bed and blew out the candle. No, not afraid. She feared nothing and no one. She just disdained to be there when it happened, that was all.

Last year Wulfric and the Earl of Redfield, their neighbor at Alvesley Park, had arranged a match between Lady Freyja Bedwyn and Kit Butler, Viscount Ravensberg, the earl's son. The two of them had known each other all their lives and had fallen passionately in love four years ago during a summer when Kit was home on leave from his regiment in the Peninsula. But Freyja had been all but betrothed to his elder brother, Jerome, at the time and she had allowed herself to be persuaded into doing the proper and dutiful thing-she had let Wulfric announce her engagement to Jerome. Kit had returned to the Peninsula in a royal rage. Jerome had died before the nuptials could take place.

Jerome's death had made Kit the elder son and heir of the Earl of Redfield, and suddenly a marriage between him and Freyja had been both eligible and desirable. Or so everyone in both families had thought-including Freyja.

But not, apparently, including Kit.

It had not occurred to Freyja that he might be bound upon revenge. But he had been. When he had arrived home for what everyone expected to be their betrothal celebrations, he had brought a fiancée with him-the oh-so-proper, oh-so-lovely, oh-so-dull Lauren Edgeworth. And after Freyja had boldly called his bluff, he had married Lauren.

Now the new Lady Ravensberg was about to give birth to their first child. Like the dull, dutiful wife she was, she would undoubtedly produce a son. The earl and countess would be ecstatic. The whole neighborhood would doubtless erupt into wild jubilation.

Freyja preferred not to be anywhere near the vicinity of Alvesley when it happened-and Lindsey Hall was near.

Hence this journey to Bath and the prospect of having to amuse herself there for a month or more.

She had not drawn the curtains across the window. What with the moon and stars above and the light of numerous lanterns from the inn yard below, her room might as well have been flooded by daylight. But Freyja did not get up to pull the curtains. She pulled the covers over her head instead.

Wulfric had hired a private carriage for her and a whole cavalcade of hefty outriders, all with strict instructions to guard her from harm and other assorted inconveniences. They had been told where to stop for the night-at a superior establishment suitable for a duke's daughter, even one traveling alone. Unfortunately, an autumn fair in that town had drawn people for miles around and there was not a room to be had at that particular inn or any other in the vicinity. They had been forced to journey on and then stop here.

The outriders had wanted to take shifts sitting on guard outside her room, especially on learning that there were no locks on any of the doors. Freyja had disabused them of that notion with a firmness that had brooked no argument. She was no one's prisoner and would not be made to feel like one. And now Alice was gone too.

Freyja sighed and settled for sleep. The bed was somewhat lumpy. The pillow was worse. There was a constant noise from the yard below and the inn about her. The blankets did not block out all the light. And there was Bath to look forward to tomorrow. All because going home had become a near impossibility to her. Could life get any bleaker?

Sometime soon, she thought just before she drifted off to sleep, she really was going to have to start looking seriously at all the gentlemen-and there were many of them despite the fact that she was now five and twenty and always had been ugly-who would jump through hoops if she were merely to hint that marriage to her might be the prize. Being single at such an advanced age really was no fun for a lady. The trouble was that she was not wholly convinced that being married would be any better. And it would be too late to discover that it really was not after she had married. Marriage was a life sentence, her brothers were fond of saying-though two of the four had taken on that very sentence within the past few months.

Freyja awoke with a start some indeterminate time later when the door of her room opened suddenly and then shut again with an audible click. She was not even sure she had not dreamed it until she looked and saw a man standing just inside the door, clad in a white, open-necked shirt and dark pantaloons and stockings, a coat over one arm, a pair of boots in the other hand.

Freyja shot out of bed as if ejected from a fired cannon and pointed imperiously at the door.

The man flashed her a grin, which was all too visible in the near-light room.

"I cannot, sweetheart," he said. "That way lies certain doom. I must go out the window or hide somewhere in here."

"Out!" She did not lower her arm-or her chin. "I do not harbor felons. Or any other type of male creature. Get out!"

Somewhere beyond the room were the sounds of a small commotion in the form of excited voices all speaking at once and footsteps-all of them approaching nearer.

"No felon, sweetheart," the man said. "Merely an innocent mortal in deep trouble if he does not disappear fast. Is the wardrobe empty?"

"Out!" she commanded once more.

But the man had dashed across the room to the wardrobe, yanked the door open, found it empty, and climbed inside.

"Cover for me, sweetheart," he said, just before shutting the door from the inside, "and save me from a fate worse than death."

Almost simultaneously there was a loud rapping on the door. Freyja did not know whether to stalk toward it or the wardrobe first. But the decision was taken from her when the door burst open again to reveal the innkeeper holding a candle aloft, a short, stout, gray-haired gentleman, and a bald, burly individual who was badly in need of a shave.

"Out!" she demanded, totally incensed. She would deal with the man in the wardrobe after this newest outrage had been dealt with. No one walked uninvited into Lady Freyja Bedwyn's room, whether that room was at Lindsey Hall or Bedwyn House or a shabby-genteel inn with no locks on the doors.

"Begging your pardon, ma'am, for disturbing you," the gray-haired gentleman said, puffing out his chest and surveying the room by the light of the candle rather than focusing on Freyja, "but I believe a gentleman just ran in here."

Had he awaited an answer to his knock and then addressed her with the proper deference, Freyja might have betrayed the fugitive in the wardrobe without a qualm. But he had made the mistake of bursting in upon her and then treating her as if she did not exist except to offer him information-and his quarry. The unshaven individual, on the other hand, had done nothing but look at her-with a doltish leer on his face. And the innkeeper was displaying a lamentable lack of concern for the privacy of his guests.