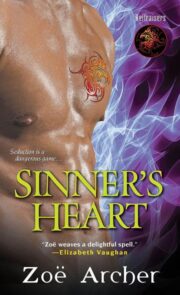 DEMONS OF THE PAST
Abraham Stirling, Lord Rothwell, was a fighter once, a soldier in the Colonies. But Bram returned to London with more nightmares than tales of glory. Now he drowns his senses in the arms of countless women, while his friends, the Hellraisers, ensure he needn’t sin alone.
Until, that is, the Devil himself grants them each a wish, undoing their camaraderie as they explore their wicked powers. Bram finds himself magically bound to Valeria Livia Corva, the sensuous priestess who raised the Devil the first time—and died to send the demon back.
She may be a ghost, but Livia is no angel. The raw passion she witnesses in Bram’s memories isn’t much different from her behavior when she had a body to enjoy. But it doesn’t make it any easier to convince Bram to become a warrior again, lest all London burn. And the fierce desires reawakening within her might just start the blaze…

For Zack, and all we have survived together

There was no pleasure in sinning when one sinned alone.

Not so long ago, Abraham Stirling, Lord Rothwell hadn’t been alone. When Bram would plunge into the night and its pleasures, there had been others beside him to share the wickedness. The five of them had done such acts as to make the whole of London their stage and audience, the city held rapt by scandal of the Hellraisers’ making.

It was down to him, now. Whilst his friends had strayed, he held tight to the wild paths. Sin and immorality and indulgence at any cost. His one reliable means of forgetting.

Bram was alone tonight, but soon he wouldn’t be.

Laughing, Lady Girard swayed down the corridor, away from the crowded ballroom. She did not look back, but his footfalls upon the polished floor deliberately announced his pursuit. Bram made no secret of his hunt. Breaking her studied insouciance, she cast him a deliberate glance over her shoulder as she slipped into one of the small, empty chambers, leaving the door open.

Behind him, sharp laughter rang out, the sounds of men and women determined to enjoy themselves no matter the price. Desperation edged their gaiety, as though by dancing, drinking, and flirting, they might beat back the specter of madness that haunted the city.

He wouldn’t think of that. He would think of nothing but his own pleasure. Thus his aggressive pursuit this evening of Lady Girard, as her husband gambled away a fortune in the card room.

Whit never cared for the games of chance at assemblies. He had said they never played deep enough for his liking, the stakes far too low. More than a few nights with the Hellraisers had been spent in gaming hells, immersed in risk, winning and losing staggering sums of money. Whit had his strategies, even before he’d been able to manipulate the odds. He’d tried to instruct Bram, but Bram hadn’t the patience for calculation and cunning. Not at cards and dice.

Loss carved a hollow within his chest. No, he wouldn’t think of Whit, either. Nor Leo nor Edmund. Not even John.

This night is mine. Lady Girard will be mine.

He stepped into the small chamber and closed the door behind him. The sounds of forced gaiety muted. The only noise within this sitting room was the ticking of a gilt clock on a mantel, and Lady Girard’s heeled slippers tapping on the floor as she walked backward, watching him with a sly gaze.

Light from a single candelabra turned her yellow, low-necked gown lustrous and painted the tops of her breasts gold. She was beautiful, her powdered hair as pale as ivory, her lips bearing traces of artful paint. A glittering trinket of a woman.

Just enough sparkle to distract him for a few blessed moments.

She leaned back against a small table, her hands resting on its edge. The position thrust up her chest so that the neckline of the gown dipped even lower, almost fully exposing her breasts.

“You flatter me, Lord Rothwell.”

“Flattery is a means of deception, and I do not deceive.” He stalked closer, feeling the hum of anticipation through his body, until he stood over her.

She chuckled. “I know all about you.” She trailed a finger up the length of his chest, toying with the sparkling jet buttons of his waistcoat, and lingering in the spaces between the buttons. A hum of appreciation curled from her lips.

Lust, and only lust between them. So simple. The call of one body to another. Animal and basic, for all their sophisticated voices and urbane glances. The lush realm of the senses.

He stepped closer, the froth of her skirts about his legs.

“You claim to know all about me.” He ran one finger over the curve of Lady Girard’s collarbone, and her eyes drifted closed. “Yet here you are.”

“I’m told that too much chocolate is detrimental to my health, and yet I crave its taste.” She looked pleased by her wit, and he’d no doubt she would repeat the phrase again to another lover.

“We have circled one another for long enough.”

“And here I was, despairing that I might ever draw your notice.” She gazed up at him through the fan of her lashes, a coquette’s practiced look. God knew that Bram had seen an abundance of that same calculated flirtation, and done his own share.

She tossed her head. The sapphires at her ears danced. Another deliberate move. “What if I desire more than your notice?”

He was in no mood to indulge her need for flattery. Too much burned through him—loss, anger, despair. There was only one way he knew to gain solace. It might be temporary, but any relief was better than none.

Her eyes widened at his directness. “Well, yes, but—”

“Turn around and put your hands on the table.”

For a moment, she just stared at him, as though shocked by his command. He stared back, and reached into himself, drawing upon the power within him. It was a pair of velvet shackles he might fasten wherever he desired. A single suggestion, and he felt her will bend, supine, to his.

Her eyes turned glassy and bright. He knew that look well.

“Of course,” she murmured with a little smile. Her gown made a rustling sound as she turned and bent over the table. Over her shoulder, she sent him a sultry glance.

He gathered up her skirts, his hands filling with silk that felt like brittle, dead leaves. He did not look at her legs, though they were soft and satiny, but concentrated on the back of her neck, where a line of fallen hair powder had gathered and mixed with her sweat.

The need took hold of him, brutal and demanding. To fall into the torrent of lust, where only bodily pleasure existed, and he could forget the collapsing world.

He reached for the fastenings of his breeches.

Lady Girard stirred. “Are we to have an audience?”

“Then who is that?” She nodded toward the farthest corner of the room, veiled in shadow. “And why is she in fancy dress?”

He stared. A woman stood in the corner, watching them with a mixture of bewilderment and fascination.

She wore the clothing of ancient Rome: draped tunic, diadem in her artfully curled hair, snake-shaped bracelet winding up her arm.

He cursed. He knew her. All too well. Valeria Livia Corva.

“Leave me the hell alone,” he growled.

“Of course I bloody see you.” Though Lady Girard shifted beneath him, he would not relinquish his hold on her skirts.

“Oh, my God!” Lady Girard pushed away from the table and Bram with a scream.

For the light revealed that Livia was translucent. The details of the chamber could be seen through her softly glowing form, and she did not walk upon the floor but hovered. As she moved nearer, she passed through a chair as if she were made of vapor.

“A specter!” Lady Girard bolted toward the door. She did not look back as she tore it open, then ran out into the corridor, her slippers pattering like raindrops.

Bram wanted to call her back. Yet he had used his power upon her already. It worked only once for each person. And he doubted very much that even a man as skilled in seduction as he could woo her back. For most people, the sight of a genuine ghost was terrifying and strange.

He was overly familiar with the terrifying and strange. And it enraged him.

“Spare me from your invectives and lamentations, for I haven’t the stomach for them tonight.” His gaze raked her as he straightened his coat. Thwarted lust seethed beneath his skin. “At least you once had the good manners to appear to me in private.”

She drifted closer, hand outstretched in demand. “You must—”

“None of this. I cannot abide hearing more of your dictates.”

“Enough,” he snarled. “My pleasure here is ruined, so I must seek it elsewhere.”

She scowled. “There’s far more at stake than your pleasure.”

As though he needed reminding. Edmund was dead. Whit and Leo were lost. And John . . . Bram didn’t know who John was anymore. The five Hellraisers now scattered to the winds like ashes as the world burned. And they were the ones who lit the tinder.

He stared at the specter. “I don’t bloody care.”

Before she could speak again, he strode from the chamber. Returning to the ballroom, he saw Lady Girard being comforted by three swains. She turned her stunned gaze to him, but he didn’t linger. Like everything in his life, tonight had been thrown to hell. He shouldered his way roughly through the sweaty, perfumed crowd, ignoring those that called to him or pulled at his sleeves.

Finally out of the ballroom, he sped from the house—Lord Dunfrey’s place? Did it matter? His long stride took him away from the assembly, the voices, his hindered seduction, that damned ghost, and into the night. Into the darkness.