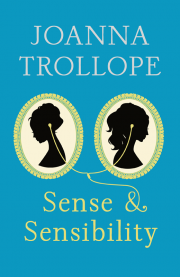 From one of the most insightful chroniclers of family life working in fiction today comes a contemporary retelling of Jane Austen’s classic novel of love, money, and two very different sisters.
John Dashwood promised his dying father that he would take care of his half sisters. But his wife, Fanny, has no desire to share their newly inherited estate with Belle Dashwood’s daughters. When she descends upon Norland Park with her Romanian nanny and her mood boards, the three Dashwood girls — Elinor, Marianne, and Margaret — are suddenly faced with the cruelties of life without their father, their home, or their money.
As they come to terms with life without the status of their country house, the protection of the family name, or the comfort of an inheritance, Elinor and Marianne are confronted by the cold hard reality of a world where people’s attitudes can change as drastically as their circumstances.
With her sparkling wit, Joanna Trollope casts a clever, satirical eye on the tales of Elinor and Marianne Dashwood. Reimagining Sense and Sensibility in a fresh, modern new light, she spins the novel’s romance, bonnets, and betrothals into a wonderfully witty coming-of-age story about the stuff that really makes the world go around. For when it comes to money, some things never change…

For Louise and Antonia

From their windows – their high, generous Georgian windows – the view was, they all agreed, spectacular. It was a remarkable view of Sussex parkland, designed and largely planted two hundred years before to give the fortunate occupants of Norland Park the very best of what nature could offer when tamed by the civilising hand of man. There were gently undulating sweeps of green; there were romantic but manageable stretches of water; there were magnificent stands of ancient trees under which sheep and deer decoratively grazed. Add to all that the occasional architectural punctuation of graceful lengths of park railing and the prospect was, to the Dashwood family, gathered sombrely in their kitchen, gazing out, perfection.

‘And now,’ their mother said, flinging an arm out theatrically in the direction of the open kitchen window, ‘we have to leave all this. This – this paradise.’ She paused, and then she added, in a lower voice but with distinct emphasis, ‘Because of her.’

All three daughters watched her, in silence. Even Marianne, the middle one, who had inherited in full her mother’s propensity for drama and impulsiveness, said nothing. It was clear to all of them, from long practice, that their mother had not finished. While they waited, they switched their collective gaze to the scrubbed top of the kitchen table, to the spongeware jug of artless garden flowers, randomly arranged, to their chipped and pretty tea mugs. They were quite still, scarcely breathing, three girls waiting for the next maternal tirade.

Belle Dashwood continued to gaze longingly at the view. It had been the girls’ father – their recently, appallingly, dead father – who had called their mother Belle. He said, in his emotional, gallant way, that, as a name, Belle was the perfect fit for its owner, and in any case, Isabella, though distinguished, was far too much of a mouthful for daily use.

And so Isabella, more than twenty years ago, had become Belle. And in time, quietly and unobtrusively, she had morphed into Belle Dashwood, as the wife (apparently) of Henry Dashwood, and (more certainly) the mother of Elinor and Marianne and Margaret. They were a lovely family, everyone remarked upon it: that open-hearted man; his pretty, artistic wife; those adorable girls of theirs. Their charm and looks made them universally popular, so that when Henry had had a fairy-tale stroke of luck, and was summoned, with Belle and the girls, to share the great house of a childless old bachelor uncle to whom Henry was the only heir, the world had rejoiced. To be transported from their happy but anxiously threadbare existence to live at Norland Park, with its endless bedrooms and acres, seemed to most of their friends only a delightful instance of the possibility of magic, an example of the occasional value of building castles in the air.

Old Henry Dashwood, uncle to young Henry, was himself part of that nostalgic and romantic belief in the power of dreams. He had been much beloved, a kind of self-appointed squire to the whole district, generous to the local community and prepared to open the doors of Norland to all manner of charitable events. He had lived at Norland all his life, looked after by a spinster sister, and it was only after she died that he realised the house needed more human life in it than he could possibly provide by himself. And that realisation was swiftly followed by a second one, a recollection of the existence and circumstance of his likeable if not particularly high-achieving heir, his nephew Henry, only child of his younger and long-dead sister, who was now, by all accounts, living on the kind of breadline that old Henry was certain that no Dashwood should ever be reduced to. So young Henry was summoned for an audience, and arrived at Norland with a very appealing companion in tow, and also, to old Henry’s particular joy, two little girls and a baby. The family stood in the great hall at Norland and gazed about them in awe and wonder, and old Henry was overcome by the impulse to spread his arms out and to exclaim, there and then, that they were welcome to stay, to come and live with him, to make Norland their home for ever.

‘I will rejoice’, he said, his voice unsteady with emotion, ‘to see life and noise back at the Park.’ He had glanced, damp-eyed, at the children. ‘And to see your little gumboots kicked off by the front door. My dears. My very dears.’

Elinor, watching her mother now, swallowed. It didn’t do to let her mother get too worked up about anything, just as it didn’t do to let Marianne get over-excited, either. Belle didn’t suffer from the asthma which had killed Elinor’s father, young Henry, and which made Marianne so dramatically, alarmingly fragile, but it was never a good thing, all the same, to let Belle run on down any vehement track, in case she flew out of control, as she often did, and it all ended in tears. Literal tears. Elinor sometimes wondered how much time and energy the whole Dashwood family had wasted in crying. She cleared her throat, as undramatically as she could, to remind her mother that they were still waiting.

Belle gave a little start. She withdrew her gaze from the sight of the huge shadow of the house inching its way across the expanse of turf beyond the window and sighed. Then she said, almost dreamily, ‘I came here, you know, with Daddy.’

‘Yes,’ Elinor said, trying not to sound impatient, ‘we know. We came too.’

Belle turned her head sharply and glared at her oldest daughter, almost accusingly. ‘We came to Norland’, she said, ‘because we were asked. Daddy and I came here, with you all, to look after Uncle Henry.’ She stopped and then she said, more gently, ‘Darling Uncle Henry.’

There was another silence, broken only by Belle repeating softly, as if to herself, ‘Darling Uncle Henry.’

‘He wasn’t actually that darling,’ Elinor said reasonably. ‘He didn’t leave you the house. Did he. Or enough money to live on.’

Belle put her chin up slightly. ‘He wanted to leave both to Daddy. If Daddy hadn’t—’ She broke off again.

Her older sisters turned on her.

Tears immediately sprang to Marianne’s eyes. Elinor clamped an arm round her shoulders and held her hard. It must be so awful, she often thought, to take everything to heart so, as Marianne did; to react to every single thing that happened as if you were obliged to respond on behalf of the whole feeling world. Holding her sister tight, to steady her, she took a breath.

‘Well,’ she said, in as level a voice as she could manage, ‘we have to face what we have to face. Don’t we. Dad is dead, and he didn’t get the house either. Did he. Darling Uncle Henry didn’t leave him Norland or any money or anything. He got completely seduced by being a great-uncle to a little boy in old age. So he left everything to them. He left it all to John.’

Marianne was quivering rather less. Elinor relaxed her hold and concentrated instead on her mother. She said again, a little louder, ‘He’s left Norland Park to John.’

Belle turned to look at her. She said reprovingly, ‘Darling, he had to.’

‘He did. Houses like Norland go to heirs with sons. They always have. It’s called primogeniture. Daddy had Norland for his lifetime.’

Elinor dropped her arm from her sister’s shoulders. ‘We’re not the royal family, Ma,’ she said. ‘There isn’t a succession or anything.’

Margaret had been fiddling, as usual, with her iPod, disentangling the earpiece flex from the complicated knot she was constantly, absently, tying it in. Now she looked up, as if she had just realised something. ‘I expect,’ she said brightly, ‘that Dad couldn’t leave you anything much because he hadn’t married you, had he?’

Elinor looked at her youngest sister. ‘Just because you know something, Mags, or even think it, doesn’t necessarily mean that you have to say it.’

Margaret shrugged. It was her ‘whatever’ shrug. She and her school friends did it perpetually, and when they were asked not to, they held up their splayed fingers in a ‘w’, to demonstrate the ‘whatever’ shape instead.

Marianne was crying again. She was the only person Elinor had ever encountered who could cry and still look ravishing. Her nose never seemed to swell or redden, and she appeared able just to let huge tears slide slowly down her face in a way that one ex-boyfriend had said wistfully simply made him want to lick them off her jawline.

Marianne said, almost desperately, between sobs, ‘I adore this place …’

Elinor looked about her. The kitchen was not only almost painfully familiar to her, but also represented the essence of their life at Norland, its great size and elegant Georgian proportions rendered welcoming and warm by Belle’s gift for bohemian homemaking, her eye for colour and fabric and the most beguiling degree of shabbiness. That room had seen every family meal, every storm and tantrum, every celebration and party, almost every line of homework. Uncle Henry had spent hours in the patchwork-covered armchair, a whisky tumbler in his hand, egging the girls on to divert and outrage him. Their father had spent as many hours in the carver chair at the head of the huge scrubbed table, drawing and reading and always available for interruption or consolation or diversion. To be without this room, and all its memories and capacities, seemed violently and abruptly unendurable. She said, tensely, to her sister, ‘We all do.’