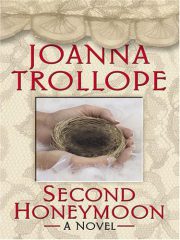 Now that her third and last child has left the nest, Edie Boyd’s life turns suddenly and uncomfortably silent. She begins to yearn for the maternal intimacy that now seems lost to her forever. Be careful what you wish for…Before long, a mother-and-child reunion is in full swing: life away from the nest has proven to be unexpectedly daunting to the children, who one-by-one return home, bringing their troubles.
With an unannounced new phase of parenthood suddenly stretching ahead of her, Edie finds her home more crowded than ever. In this touching, artful novel, Joanna Trollope has created a family drama for the ages, a moving story of work, love and eternal parenthood.

Edie put her hand out, took a breath and slowly, slowly pushed open his bedroom door. The room inside looked as if he had never left it. The bed was unmade, the curtains half drawn, the carpet almost invisible under trails of clothing. There were single trainers on shelves, mugs and cereal bowls on the floor, scatterings of papers and books everywhere. On the walls the same posters hung haphazardly from nuggets of blue gum: a Shakespeare play from a long-ago school outing, Kate Moss in a mackintosh, the Stereophonics from a concert at Earls Court. It looked, at first glance, as it had looked for a large part of his twenty-two years. It looked as if he was coming back, any minute.

Edie stepped through the chaos on the floor – ah, that’s where her only bone-china mug had got to – and pulled the curtains fully apart. One side, obviously accustomed to doing this, rushed headlong to the left and slid triumphantly off the pole to the floor. Edie looked up. The finial that stopped the end was missing. It had probably been missing for months, years, and Ben’s solution had been simply, pragmatically really, not to touch the curtain. In fact, on reflection, he would have had to thread the curtain back on to the pole just once, when the finial first fell off, and this small sign of enterprise and efficiency on his part made Edie think that she might cry. She picked up the fallen curtain and held it hard against her, swallowing against the crying.

‘He hasn’t gone to Mongolia,’ Russell had almost shouted at her that morning. ‘He hasn’t died. He’s gone to Walthamstow’.

Edie had said nothing. She had gone on jabbing at a hermetically sealed packet of coffee with the wrong kind of knife and said nothing.

Edie flung the coffee and the knife into the sink. She would not look at Russell, she would not speak. She hated him when he was like this, when he knew perfectly well what was the matter and refused to admit it. She didn’t hate his attitude, she told herself: she hated him.

Edie pulled the curtain up now and covered her face with it. It smelled of dust, years and years of grimy London dust, silting in through the window frames like the fine tilth from a tea bag. She hadn’t acknowledged Russell’s ‘Sorry’. She hadn’t looked at him. She had remained silent, distanced by emotion, until she heard him go out of the room and down the hallway – fumble, fumble by the coat rack – and out through the front door, letting it crash behind him the way they all had, two parents, three children, for close on twenty years. Twenty years. Almost all Ben’s lifetime, almost a third of hers. You come to a house, Edie thought, pressing the dusty curtain against her eye sockets, carrying almost more life, more people, than you can manage. And then, over time, almost everything you have carried in begins to leak out again, inexorably, and you are left clutching fallen curtains at ten o’clock on a Saturday morning instead of applying yourself, with all your new reserves of no longer required maternal energy, to quality leisure.

She dropped the curtain back on to the floor. If she turned, slowly, and half closed her eyes, she could persuade herself that Ben had left his room in a mess as a signal to her that he hadn’t really left it. That this notion of his to put all the essentials of his life into a duffel bag and carry it off to live with Naomi, in a spare room in her mother’s flat in Walthamstow, was in truth no more than a notion. That he would begin to miss things, his childhood home, the cat, his pillow, his mother, and would see that life was not to be lived so satisfactorily anywhere else. But if she made herself open her eyes wide, really wide, and looked at the calibre of things he had left, the outgrown garments, the broken shoes, the discarded or irrelevant books and discs and papers, she could see that what Ben had left behind was what he didn’t want any more. He had taken what represented the present and the future, and he had left the past, leaving it in such a way as to emphasise its irrelevance to him. Edie bent down and began, without method or enthusiasm, to pick up the cereal bowls.

It wasn’t as if Ben had ever, really, been away from home. His school days had melted comfortably into his college days and then into irregular, haphazard days of assistant to a self-employed photographer who specialised in portraits. All through these years Ben had come home, more nights than not, to sleep in the bedroom across the landing from his parents’ bedroom, which had been allotted to him when he was two. His bedroom had been by turns pale yellow, purple, papered with aeroplanes, and almost black. The detritus of his life, from Thomas the Tank Engine to trailing computer cables, had spilled out of his room and across the landing, symbols of his changing taste, his changing world. The thought of the order – no, not order, the absence of chaos – that might follow his departure for Walthamstow brought Edie close to panic. It was like – like having an artery shut off, a light extinguished. It was far, far worse than when Matt had gone. Or Rosa. It was far, far worse than she expected.

She began to pile mugs and bowls without method on Ben’s table. He had done homework at that table, made models, hacked with blades at the edges. She sat down by it, on the chair with the broken cane seat, filled in by a gaudy Indian cushion embroidered with mirrors. She looked at the mess on the table. Ben was her youngest, her last. When the others went, she had felt a pang, but there had always been Ben, there had always been the untidy, demanding, gratifying, living proof that she was doing what she was meant to do, that she was doing something no one else could do. And, if Ben wasn’t there to confirm her proper perception of herself in that way, what was she going to do about the future? What was she going to do about herself?

‘It’s awful,’ her sister, Vivien, had said on the telephone. ‘It’s just awful. You spend all these years and years developing this great supporting muscle for your children and then they just whip round, don’t they, and hack it through’. She’d paused, and then she’d said, in a cooler tone, ‘Actually, it’s not so bad for you because you’ve always got the theatre’.

‘Well, I know you aren’t working at this precise moment. But you always could be, couldn’t you? You’re always going for auditions and things’.

There was another pause and then Vivien said, in the slightly victim voice Edie had known since their childhoods, ‘Eliot’s gone too, Edie. And he’s my only child. He’s all I’ve got’.

Eliot had gone to Australia. He had found a job on a local radio station in Cairns, and within six months had a flat and a girlfriend there. Ben had gone five stops up the Victoria line to Walthamstow.

‘Enough,’ Edie said, and put the telephone down.

‘Enough,’ she said to herself now, her elbows on Ben’s table. She twisted round. Against the wall, Ben’s bed stood exactly as he had left it, the duvet slewed towards the floor, the pillow dented, a magazine here, a pair of underpants there. It was tempting, she thought, holding hard to the chairback as an anchor, to spring up and fling herself down on Ben’s bed and push her face into his pillow and breathe and breathe. It was very tempting.

Downstairs the front door crashed again. She heard Russell’s feet on the tiles of the hall, heard him say something companionable to the cat.

Edie looked up at Ben’s bookshelves, at the space at the end where his teddy bear always sat, wearing Russell’s old school tie from over forty years ago. The bear had gone. She stood up, holding an awkward stack of crockery.


The garden was one of the reasons they had bought the house twenty years ago. It was only the width of the house, but it was seventy-five feet long, long enough for Matt, then eight, to kick a ball in. It also had a shed. Russell had loved the idea of a shed, the idea of paraffin heaters and fingerless gloves and listening to the football results on an old battery-operated radio. He saw seclusion in that shed, somewhere set apart from his family life and his working life because both were, by their very nature, all talk. He had a vision of being in the shed on winter weekend afternoons, probably wrapped in a sleeping bag, and looking back down the garden to the house, a dark shape with lit windows, and knowing that all that life and clamour was there for him to step back into, when he chose. It was a very luxurious vision, in that it encompassed both privacy and participation, and he clung to it during the years while the shed filled up with bikes and paint tins and broken garden chairs, leaving no space for him. It was even called ‘Dad’s shed’.