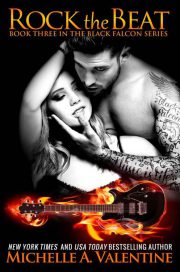 Twenty-year-old Holly Pearson never dreamed that while working at her father’s motocross track she’d run into the walking, talking definition of trouble in a sexy, tattooed package—Trip Douglas, the man sent to evaluate the track for a possible investment opportunity. Holly makes no attempt to hide the fact she despises Trip, but she learns to be civil toward him when he offers to help her land the man of her dreams.
Trip needs a break from the crazy rock-and-roll lifestyle he’s been living for the past few years. With his Black Falcon band mates settling down with marriage and babies, Trip peruses an investment opportunity in motocross, something he’s always been passionate about. Hiding his celebrity status, Trip infiltrates the new business posing as a dirt bike rider training for the X-Games. The only obstacle is the owner’s daughter, Holly. She’s a real ball bustin’ Ice Queen, and she’ll do whatever it takes to make the deal fall through. Trip soon discovers that winning over his new enemy is the key to gaining a partnership in Mountain Time Speed Track.
Knowing he’s the expert on getting laid, Trip ropes Holly into becoming his ally by helping her score a date with the man she’s crushing on. The problem is, the more time Trip and Holly spend together, the more they uncover the undeniable attraction between them. Soon they both realize that even the best laid plans go to hell when you find you’re falling in love with the enemy.

To the readers: You all are my cheerleaders and I love each and every one of you. If it weren’t for your love, I would never have the courage to keep on writing. Thank you for being so awesome!

For some strange reason there are socially acceptable jokes made all the time about women being late for dates, but there aren’t any for guys. Take my boyfriend, Jackson Cruze, for example. He’s stunningly has a face like Channing Tatum, a body that David Beckham would be envious over, and the time management skills of a well-trained baboon. The guy couldn’t be on time if it saves his life.

I check my watch again and sigh. Surely he won’t forget to pick me up tonight? We’ve had this date planned for two-year anniversary for some time now. He’s not that big of a jerk, is he?

I pull out my cell and call my best friend, Max, while I wait. Like clockwork, he answers on the second ring and I ask, “Where are you?”

Max laughs into the phone while the sounds of a wild party fill in behind him. “I’m at Paulo’s. Why aren’t you here? This is the biggest end of summer bash I’ve ever seen. You got to get your ass over here.”

Paulo’s has the best Mexican food, drinks and DJs this side of the border. It’s one of my most favorite places to hang out with my friends, and it sounds a whole lot better than waiting on my date who’s already over an hour late.

I pick at my nails. “I can’t. I’m waiting on Jackson. It’s our anniversary.”

My nostrils flare and my brow crinkles. “What?! Why is he there? He’s supposed to be here.” This makes no sense.

Un-freaking-believable. “Is he drunk?”

There’s a bit of rustling on Max’s end. “Judging by the number of beer cans piled on the table and slight wobble in his stance, I’d say he’s hammered. Better forget tonight, Blondie, and plan on reaming his ass for it tomorrow. Come over and hang out with me. I miss you.”

I resist the urge to chuck my cell out into gravel parking lot in front of my house. Phones are expensive, and I don’t have an extra penny to waste. “I’m not really feeling up to it. I think I’m going to head on to bed.”

“All right. Love you. Call me tomorrow. I want to know what excuse he feeds you this time,” Max says.

He’s never been a big fan of Jackson, and this little incident certainly won’t help win Jackson win any favor points. I can’t count the number of times Max has encouraged me to break up with my boyfriend over the last two years.

“Sure thing. Good night and have fun,” I tell him before ending the call.

I haul my ass out of the old, white, rocking chair on the front porch and trudge up my stairs. I can’t believe he forgot—I even reminded him today. You’d think after two years, being together with me would mean something.

I close my bedroom door and then fall onto my bed. The yellow sundress I bought special for tonight becomes my blanket as I curl my legs inside it. Tears push their way down my temples before landing in the long, mess of blonde hair spread across my pillow. I can’t believe Jackson did this to me.

Don’t I mean anything to him? You don’t blow off people you love for a stupid party.

I know he’s not been the best boyfriend in the world, but I didn’t expect for him to totally blow me off like this. I know things have been rocky between us since I came home from college this summer, but that’s one of the reasons I decided to stay home this fall. To mend what a year away at school had broken.

I close my eyes, feeling stupid for loving someone that obviously doesn’t love me back, and cry myself to sleep.

The next thing I know my shoulder is gently shaken, stirring me out of a deep sleep. “Holly. Wake up.”

It’s Jackson, no doubt still drunk off his ass and feeling guilty. I roll over and rub my eyes while trying to make him out in the dark. “What time is it?”

I sit up quickly. “Are you out of your mind coming in here at this time of night? If my dad catches you, he’ll kill you. How’d you get in here anyway?”

After blinking a few times, my vision adjusts to the moonlit room. Jackson’s sitting on the edge of my bed with his lips pulled into a tight line. I tense. I’ve seen that look before. It’s the expression he wears when he’s nervous.

His polo shirt hugs his toned body as he bends at the waist, resting his elbows on his knees while he drops his head. “The front was open, so I let myself in.”

I sigh heavily. “Really, Jackson, this can’t wait until the morning? I know you’re sorry for standing me up. I forgive you for that. People make mistakes.”

He turns toward me and grabs my hand. “You don’t know how glad I am to hear you say that. I don’t want you to hate me.”

I don’t like the way I can sense desperation on him as he’s touching me. There’s something wrong. I’ve known him long enough that I can just feel it. “Why are you here, Jackson? Did something happen?”

Jackson runs his hand over his shaved head and shoots his gaze down at the floor. “I didn’t mean to do it, Holl. You have to believe me.”

I lean down trying to catch his gaze, but it doesn’t work. He won’t look at me and this causes my stomach to drop. “Didn’t mean to do what, Jackson? You’re scaring me.”

My breath catches at the same time my heart crumbles in my chest. I clutch my throat. There’s no air and I can’t breathe. One word keeps assaulting my mind. “Why?”

“Because I don’t think I love you anymore. If I’m being honest, I don’t believe I have for a while now. We’ve grown apart Holly and I want to date other people.” His words are barely a whisper, but he might as well be screaming them at me.

Hot tears pour down my face as I toss his hand aside. “Get out.”

Jackson stands and shoves his hands deep in his jean pockets. “I’m sorry, Holl. I’ve wanted to tell you for a while now, but I—”

I cover my ears. I don’t want to hear anything else he has to say. He’s already said enough. “Get Out!”

The sound of me shouting must’ve been loud enough to wake my dad in his bedroom downstairs. Footsteps pound up the steps and my father comes bursting in the door with a baseball bat in hand. Panic wells in my father’s eyes until he spots my boyfriend in my room, then his expression turns from fear to anger. Before Dad has a chance to scold Jackson for being in my room, Jackson runs out my door and out of my heart for good.

I lay on my bed staring up at the ceiling. It’s been two weeks since Jackson dumped me. Two weeks since my heart was obliterated. Two weeks since I basically stopped living my life. For the last two years Jackson has been my world. Without him I’m not even sure how to carry on.

A loud pounding on my bedroom door makes me jump. “Blondie, I know you’re in there. Get decent, because I’m coming in.”

The door flies open and my best friend, Max, comes barreling through. He marches over to my bed and grabs my wrist, tugging me to sit up. “Jeesh, Holly, this is pathetic. Get your cute, little ass up. We’re getting you out of this house. It’s been two weeks.”

I groan and try to fling myself back onto my pillow, but Max’s hold won’t allow it. “Oh, no. No more lying in this dark room, depressed over a man that’s good riddance as far as I’m concerned. You, missy, are going out and rejoining the land of the living, whether you like it or not.”

I try to protest, but Max grabs my arm and leg and hoists me over his broad shoulders. “No, Max. Please.”

He sighs. “Holly, this is for your own good. I’m tired of seeing you waste your energy on Jackson Cruze. He’s an asshole, and I’m glad you aren’t with him anymore.”

“But, I love him, Max. I don’t know how to live my life without him,” I argue as Max carries me down the hall towards the bathroom.

Once we’re in the bathroom, Max sets me down and turns on the shower before facing me. “You need to find new happiness without him. It’s over between the two of you. I’ve already seen him with other women. Trust me, he’s not pinning away over you. It’s time to move on.”

Tears burn my eyes of how little I actually meant to him. “He’s dating already?”

Max nods and places his hands on my shoulders. “It’s time for you to get back out there too. Now get your skanky ass a shower and get ready. I’m taking you to a club.”

A couple hours later I find myself downtown with Max. It’s 90’s Nite in one of the hottest clubs in town, and I love to dance and drink. It’s the perfect combination to wipe away the memories of a man that’s done me wrong.

I glance around and survey all the men in place. Why are all the really hot men either gay or taken? I swear there’s one decent man left in Tucson. Thank God my best friend is with me. I have terrible gaydar.

“I told you this would be great,” Max yells over the music as he dances with me to the beat of a Roxette song blaring through the speakers. “You’ll be saying, ‘Jackson who?’ by the time we leave this heavenly bar filled with hot men.”