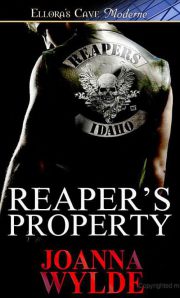 Marie doesn’t need a complication like Horse. The massive, tattooed, badass biker who shows up at her brother’s house one afternoon doesn’t agree. He wants Marie on his bike and in his bed. Now.
But Marie just left her abusive jerk of an ex-husband and she’s not looking for a new man. Especially one like Horse—she doesn’t know his real name or where he lives, she’s ninety percent certain he’s a criminal and that the “business” he talks with her brother isn’t website design. She needs him out of her life, which would be a snap if he’d just stop giving her mind-blowing orgasms.
Horse is part of the Reapers Motorcycle Club, and when he wants something, he takes it. What he wants is Marie, but she’s not interested in becoming “property of”.

I want to express my appreciation to Raelene Gorlinsky, the editor and publisher who wouldn’t give up on me, and my test readers, Mary and Alicia. Thanks also to my husband who is endlessly supportive of all my creative efforts. Finally, a special thanks to my first editor, Martha Punches, who has continually encouraged me to keep writing even though I took so many years off. Martha, you were right about past progressive tense verbs, and I was wrong…

Crap, there were bikes outside the trailer.

Three Harleys and a big maroon truck I didn’t recognize.

Good thing I’d stopped by the grocery store on the way home. It had already been a long day and the last thing I wanted to do was to run out and buy even more food, but the guys always wanted to eat. Jeff hadn’t given me any extra beer money and I didn’t want to ask him—not with his money troubles. It wasn’t like I paid rent. For a guy whose entire mission in life was to smoke pot and play video games, my brother Jeff had done a lot for me over the past three months. I owed him and I knew it.

I’d already grabbed some beer and ground beef that’d been on sale. I’d planned on burgers, buns and chips for the two of us, but I always made extra, for leftovers. Gabby had given me a watermelon she’d picked up in Hermiston that weekend. I even had a big potato salad all made up for the potluck after work tomorrow. I’d have to stay up late making another one but I could handle that.

I smiled, thankful something in my life was going right. Less than a minute to plan and I’d figured out a meal—might not be gourmet, but it wouldn’t embarrass Jeff either.

I pulled up next to the bikes, careful to leave them plenty of room. I’d been terrified of the Reapers the first time they’d come over. Anyone would be. They looked like criminals, all tattooed and wearing black leather vests covered in patches. They cussed and drank and could be rude and demanding, but they’d never stolen or broken anything. Jeff had warned me about them lots of times but he also considered them friends. I’d decided he was exaggerating about the danger, for the most part. I mean Horse was dangerous enough, but not because of any criminal activity…

Anyway, I think Jeff did some web design for them or something. Some kind of business. Why a motorcycle club needed a website I had no idea, and the one time I’d asked him about it he told me not to ask.

Then he’d scuttled off to the casino for two days.

I got out of the car and went around back to grab the groceries, almost scared to see whether Horse’s bike was in the lineup. I wanted to see him so bad it hurt but wasn’t sure what I’d say if I did. It’s not like he’d answered my text messages. But I couldn’t help myself, I had to check for him, so I grabbed my groceries and walked over to the bikes to scope them out before going inside.

I don’t know much about bikes, but I knew enough to recognize his. It’s big and sleek and black. Not all bright and decorated the way you sometimes see bikes on the freeway. Just big and fast, with giant, fat tailpipes off the back and more testosterone than should be legal.

The motorcycle was almost as beautiful as the man who rode it. Almost.

My heart stopped when I saw that bike, right on the end. I wanted to touch it, see if the leather of the seat was as smooth as I remembered, but I wasn’t stupid enough to do that. I didn’t have the right. I really shouldn’t even be excited to see him, but I felt a rush knowing he was right inside my trailer. Things weren’t smooth between us and I honestly didn’t know if he’d even acknowledge me. For a while he’d seemed almost like my boyfriend. The last time I’d seen him, he’d scared the crap out of me.

Even scary, the man made my panties wet.

Tall, built, with shoulder-length hair he kept pulled back in a ponytail, and thick black stubble on his face. Stark, tribal cuffs ringed his wrists and upper arms. And what a face… Horse was handsome, like movie star handsome. I’d bet he had women coming out his ears, and the fact that he’d spent more than one night in my bed made me all too aware that his beauty wasn’t just above the belt. The thought of his below-belt assets led to a brief but intense fantasy about him, me, my bed and some chocolate syrup.

Shit. Dessert. I needed dessert for tonight. Horse loved sweets. Were there any chocolate chips? I could do cookies, so long as there was enough butter. Please don’t let him be pissed at me, I prayed silently, even though I was pretty sure God wasn’t interested in prayers where the promise of fornication played such a prominent role. I reached the door and juggled the bags, sliding most of them onto my right arm so I could turn the handle. I walked in and looked around the living room.

My baby brother knelt in the center of the room, beaten raw and dripping blood all over the carpet. Four men wearing Reapers’ cuts stood around him. Picnic, Horse and two I didn’t know—a big, built hunk of a man with a mohawk, tattoos on his skull and about a thousand piercings, and another who was tall and cut, with light-blond hair in short spikes. Horse studied me with the same cool, almost blank expression he wore when we first met. Detached.

Picnic studied me too. He was tall with short, dark hair that looked far too stylish to be on a biker and bright blue eyes that pierced right through a girl—I’d met him at least five times. He was the club president. He had a great sense of humor, carried pictures of his two teenage girls to flash whenever he got the slightest opportunity and had helped me shuck corn the last time he’d come to visit.

Oh, and he also stood right behind my brother with a gun pointed at the back of his head.

“Marie, you did the right thing,” Jeff said, holding an ice pack to my cheek. “That cocksucker deserves to die. You will never, ever regret leaving him.”

“I know,” I replied, miserable. He was right—why hadn’t I left Gary earlier? We’d been high school sweethearts, married at nineteen and by the time I hit twenty I already knew I’d made a terrible mistake. It took until now, five years later, to realize just how terrible.

Today he’d backhanded me right across the face.

After that, it only took another ten minutes to do what I hadn’t managed in all our time together. I threw my clothes in my suitcase and left his abusive, cheating ass.

“I’m kind of glad he did it,” I said, looking down at the scarred formica table in my mom’s trailer. She was taking a little vacation at the moment in jail. Mom’s life is complicated.

“What the fuck, Marie?” Jeff asked, shaking his head. “You’re fucked in the head, talking like that.”

My brother loved me, but he wasn’t exactly a poet. I offered him a wan smile.

“I stayed with him for way too long, just taking it. I think I might have stayed forever. But when he hit me, it’s like it woke me up. I went from being terrified of leaving to just not caring anymore. Honestly, I don’t care, Jeff. He can keep everything—the furniture, the stereo, all that shit. I’m just glad to get out.”

“Well, you can stay here as long as you need to,” he said, gesturing around the singlewide. It was small and dank and smelled kind of like pot and dirty laundry, but I felt safe here. This had been my home for most of my life, and while it might not have been a picture-perfect childhood, it hadn’t been too bad for a couple of white-trash kids whose dad took off before they hit grade school.

Well, good until Mom blew out her back and started drinking. Things went downhill after that. I looked around the singlewide, trying to think. How was this going to work?

“I don’t have any money,” I said. “I can’t pay you rent. Not until I get a job. Gary never put my name on the bank account.”

“What the fuck, Marie? Rent?” Jeff asked again, shaking his head. “This is your house too. I mean, it’s a shithole, but it’s our shithole. You don’t pay rent here.”

I smiled at him, a real smile this time. Jeff might be a stoner who spent ninety percent of his life playing video games, but he had a heart. Suddenly I felt such incredible love for him that I couldn’t keep it in. I dropped the ice and launched myself at him, giving him a fierce hug. He wrapped his arms around me awkwardly, returning it even though I could tell it confused and frightened him a little.

We’ve never been a touchy-feely kind of family.

“Um, yeah,” he muttered, pulling away from me nervously, but he wore a little smile. He walked over to the counter, opened a drawer and pulled out a little glass pipe and a baggie of weed.

“You want some?” he asked. Yup, Jeff loved me. He didn’t share with just anyone. I laughed and shook my head.

He shrugged and walked into the living room—which was also the dining room, the entryway and the hallway—to sit on the couch. A second later his ginormous big-screen TV flickered to life. He clicked through the channels until he hit wrestling, not the sport but the kind where they wear funny costumes and it’s like a soap opera. Gary was probably watching the same thing back at our house. Jeff took a couple hits and then set down the pipe and his favorite death’s-head Zippo on the coffee table. Then he grabbed his laptop and flipped it open.