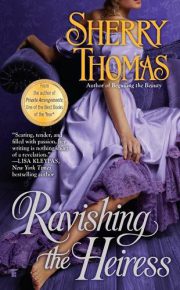 Millicent understands the terms of her arranged marriage all too well. She gets to be a Countess by marrying an impoverished Earl. And in return, the Earl Fitzhugh receives the benefit of her vast wealth, saving his family from bankruptcy. Because of her youth, they have agreed to wait eight years before consummating the marriage—and then, only to beget an heir. After which, they will lead separate lives.
It is a most sensible arrangement. Except for one little thing. Somehow Millie has fallen head over heels in love with her husband. Her husband, who has become her very best friend, but nothing more…Her husband, who plans to reunite with his childhood sweetheart, the beautiful and newly widowed Isabella, as soon as he has honored the pact with his wife…
As the hour they truly become husband-and-wife draws near, both Millie and Fitzhugh must face the truth in their hearts. Has their pact bred only a great friendship—or has it, without either of them quite noticing, given rise to a great love?

To my husband, the one with whom I have built my life

It was love at first sight.

Not that there was anything wrong with love at first sight, but Millicent Graves had not been raised to fall in love at all, let alone hard and fast.

She was the only surviving child of a very prosperous man who manufactured tinned goods and other preserved edibles. It had been decided, long before she could comprehend such things, that she was going to Marry Well—that via her person, the family’s fortune would be united with an ancient and illustrious title.

Millie’s childhood had therefore consisted of endless lessons: music, drawing, penmanship, elocution, deportment, and, when there was time left, modern languages. At ten, she successfully floated down a long flight of stairs with three books on her head. By twelve, she could exchange hours of pleasantries in French, Italian, and German. And on the day of her fourteenth birthday, Millie, not at all a natural musician, at last conquered Listz’s Douze Grandes Études, by dint of sheer effort and determination.

That same year, with her father coming to the conclusion that she would never be a great beauty, nor indeed a beauty of any kind, the search began for a highborn groom desperate enough to marry a girl whose family wealth derived from—heaven forbid—sardines.

The search came to an end twenty months later. Mr. Graves was not particularly thrilled with the choice, as the earl who agreed to take his daughter in exchange for his money had a title that was neither particularly ancient nor particularly illustrious. But the stigma attached to tinned sardines was such that even this earl demanded Mr. Graves’s last penny.

And then, after months of haggling, after all the agreements had finally been drawn up and signed, the earl had the inconsideration to drop dead at the age of thirty-three. Or rather, Mr. Graves viewed his death a thoughtless affront. Millie, in the privacy of her room, wept.

She’d seen the earl only twice and had not been overjoyed with either his anemic looks or his dour temperament. But he, in his way, had had as little choice as she. The estate had come to him in terrible disrepair. His schemes of improvement had made little to no difference. And when he’d tried to land an heiress of a more exalted background, he’d failed resoundingly, likely because he’d been so unimpressive in both appearance and demeanor.

A more spirited girl might have rebelled against such an unprepossessing groom, seventeen years her elder. A more enterprising girl might have persuaded her parents to let her take her chances on the matrimonial mart. Millie was not either of those girls.

She was a quiet, serious child who understood instinctively that much was expected of her. And while it was desirable that she could play all twelve of the Grandes Études rather than just eleven, in the end her training was not about music—or languages, or deportment—but about discipline, control, and self-denial.

That night, however, she sobbed for this man, who, like her, had no say in the direction of his own life.

But the great machinery of Marrying Well ground on. Two weeks after the late Earl Fitzhugh’s funeral, the Graves hosted his distant cousin the new Earl Fitzhugh for dinner.

Millie knew very little of the late earl. She knew even less of the new one, except that he was only nineteen, still in his last year at Eton. His youth disturbed her somewhat—she’d been prepared to marry an older man, not someone close to her own age. But other than that, she dwelled on him not at all: Her marriage was a business transaction; the less personal involvement from her, the more smoothly things would run.

Unfortunately, her indifference—and her peace of mind—came to an abrupt end the moment the new earl walked in the door.