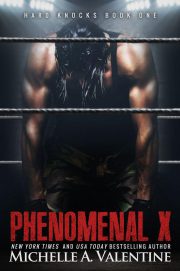 Good Girl. Notorious Bad-Boy. One Phenomenal Love.
From the mean streets of Detroit rises the newest superstar of professional wrestling, Xavier Cold, better known as Phenomenal X. His muscular physique makes men cower before him and women lose their minds with desire.
Anna Cortez is fresh out of college and naive to the harsh realities of the real world. Tired of living under the thumb of her conservative family, she defies them when she accepts a job as the assistant to wrestling’s most notorious bad-boy. Phenomenal X has an animalistic nature that even good girl Anna finds hard to resist.
One night forced to share a bed in a sold-out hotel, lines blur between them and they quickly learn that one lustful night changes everything and neither one of them will ever be the same.

Valentine’s Vixens: You ladies inspire me daily. Thank you.

“Blessed are the meek, for they shall inherit the earth”

There’s no better way to ruin a perfectly peaceful flight than sitting between two complete strangers. I always request an aisle or window seat if I can, but this flight was booked solid and the unhelpful lady at the check-in desk told me there was absolutely no wiggle room to change seats.

The older gentleman on my left keeps turning toward me and smiling, probably hoping I’ll strike up polite conversation with him, but I’m just not in the mood to be nice. I’m leaving Portland, leaving behind the only life I’ve ever known, and the only thing I feel like doing is keeping quiet and praying that I’m making the right decision.

This morning my father went into one of his lecture-filled rages, telling me what a horrible person I was when I sprung it on him that I would be on the ten o’ clock flight to Detroit to go live with Aunt Dee, his eccentric sister. My parents, especially my father, have always been great at controlling my life. Which is exactly why I’m leaving now.

I’ve followed his plan for the last twenty-one years, and it’s brought nothing but heartache. I’m ready to make my own decisions about what’s best for me.

While the other passengers settle in around me, I quickly flick through my text messages. The anger in Father’s messages is crystal clear. The same thing said a million different ways: for me to stop this nonsense of starting my own life, and come back home where I belong. Where I’m safe.

I shake my head and shut my phone off before slipping it into the seat-back pocket in front of me. “No can do, Father,” I mumble to myself.

A mother and her twin sons fill the three empty seats in the row ahead of me. They are sitting in the first row, directly behind the wall that separates the first class patrons from the rest of us lowly coach passengers. If I had to guess, I’d say the twins are about twelve or so. Their brown hair pokes out from underneath the matching baseball caps they have firmly pulled onto their heads. The hats match their red shirts with some wrestling guy on it. I can tell it’s wrestling from the logos. I remember sneaking around to watch the televised show with my younger brother when he went through a phase of loving that sort of thing.

Just then I notice an extremely tall, broad-shouldered man wearing jeans and a blue button-down shirt, with his sleeves rolled up to his elbows, board the plane. Even with his shirt on I can tell he’s all muscle underneath it. The definition in his chest and arms is undeniable as the fabric strains against his pecs and biceps. Intricate tattoos cover every inch of exposed flesh on his arms, and I immediately know he’s the kind of guy my mother always warned me about—which does nothing to decrease his appeal.

I bite my lip as my eyes scan further up and take in the dark hair on his head. It’s got a little bit of length to it and is styled to messy perfection. His strong jawline has some light stubble, like he forgot to shave this morning, and the fact that his nose isn’t perfectly straight—indicating it’s been broken a time or two—only adds to his rugged good looks. The way he carries himself, chin up with a daring expression, exudes confidence. Everything about him says he doesn’t take crap from anyone, which is a highly attractive feature in a man. And that body…yowza! It’s absolutely delicious and belongs on the cover of a magazine. It’s designed for masses of women to enjoy devouring with their eyes because in the flesh, that’s exactly what I’m doing.

And I’m loving every minute of it.

My heart pauses for a beat the moment this man locks eyes with me. When I don’t immediately turn away, a slight hint of a smile plays at the corner of his full lips. Briefly, I’m mesmerized, and then realize I’m still thinking about his body, and I’m biting my lip.

He winks at me like he knows exactly what’s on my mind before he slides into an empty row of seats in first class. A short, thin man with a mullet and a beard takes the aisle seat next to him.

I lean my head back against the seat and sigh, feeling the heat in my cheeks. That man is dangerously sexy and way out of my league.

The two boys in front of me begin waving their arms above their head. “X! X! Back here! Can we get your autograph?”

The letter X is all I hear them chant over and over as the small man who boarded the plane last turns around and says, “Not now, boys. Phenomenal X is trying to rest.” The hot guy beside him must be this “Phenomenal X” person because after the little man says that to the kids, he immediately leans over and says something to him. Mullet Man nods before turning back around to address the two boys. “Send something up, and X will sign one thing for each of you.”

“All right!” exclaims one of the boys as they give each other a high-five.

The rest of the plane begins to buzz as the knowledge that a celebrity is on board the flight spreads. While I find the man extremely attractive, I have no clue who he is and I can’t bring myself to get excited about it. I have too much on my plate to be interested in some guy who would never give someone like me the time of day.

Soon an assembly line forms as people begin to pass things up the aisle into first class. I almost feel sorry for him as it continues through taxiing, take-off, and while we are up in the air. The poor guy will probably develop writer’s cramp before the flight is over.

After I turn down the stewardess’ offer of an in-flight beverage, allowing her to assist the old man beside me who orders a tomato juice, I lean my head back and close my eyes. I try not to think about the one hundred texts Father is probably sending me right now, each repeating to me, over and over, that I’m running out on my problems back home. It isn’t something I want to keep rehashing with him.

My eyes jerk open the moment something cold and wet covers my legs. My mouth drops open as I stare down at my tomato juice-covered lap.

This is so not happening to me.

The juice drips onto the floor, and I glance down at my shoes and the bag stuffed under the seat in front of me—everything is covered. I press the call light to request assistance from the flight attendant with cleaning up, taking care to hold my hands out away from my body.

The elderly man next to me frowns as he pushes up his glasses to survey the damage. “I’m sorry, young lady. These old eyes don’t see like they used to. I didn’t mean to knock that cup into your lap.”

I can see the sincerity on his face and offer up a small smile because I don’t want him to feel any worse. “Accidents happen. No worries.”

The flight attendant approaches our row and leans over to turn the call light off before glancing down at me. “Oh, dear, looks like we’ve had a bit of a spill here.”

I stare up at her and wonder how she can be so calm in this situation, but I can tell this is the type of woman who doesn’t get worked up easily. There’s not one strand of blond hair out of place in her updo, and her blue eyes sparkle with kindness.

I glance down at my soiled clothes. “Can I have a towel or something? I checked all my clothing, so I don’t have anything extra to change into.”

“Come on up front with me and we’ll see if we can get you cleaned up,” she replies.

I nod, grateful for her offer. “Thank you.” Anything is better than smelling like rotten tomatoes for the remaining three hours of my flight. I glance over at the older man beside me. “Do you mind letting me out?”

He begins to move out of the way. “Of course not, young lady.”

I follow the flight attendant through the first class section into the front galley of the plane. She reaches into a stash of canned club sodas and hands me one, along with a handful of plain white washcloths.

She frowns at me. “Sorry, it’s not much, but try blotting it out the best you can. Taking out the smell will make your flight more comfortable. I would offer you a first class seat since I’m sure your seat is a mess, but unfortunately, it’s all full.”

“She can sit here,” a deep, rumbling voice says.

When I look up, my gaze locks onto a pair of the lightest blue eyes I think I’ve ever seen. They’re practically see-through. If I thought he was attractive from a distance that is nothing compared to the sight of him up close. The intensity causes my stomach to flip and my knees grow a little weak. I swallow hard. Considering every seat is filled, I find myself confused as to where exactly here is. As inviting as sitting on his lap for the next few hours may be, I don’t want to open that naughty can of worms. He seems like way too much man for me. I don’t think I can handle someone so…intense.

“You’re willing to give up your seat for her, Mr. Cold?” the attendant asks.

He shakes his head. “No, but my manager will give her his seat.”

Mullet Man’s head jerks toward him. “I will?”

Mr. Cold rolls his neck and glares down at him with a stare so intense, it’s almost frightening. “You have a problem with that?”

“N—no, of course not, X,” he stutters, clearly intimidated by the beast of a man beside him. “She can totally have my seat.”

Mr. Cold jerks his chin toward the back. “Then beat it.”

Mullet Man quickly gathers his things and heads back to my tomato-stained seat in coach without another word. I glance over at the flight attendant but she simply shrugs and walks back down the aisle to continue passing out drinks.