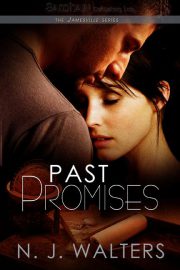 For Linda Fletcher, the sign in front of her new business says it all. Past Promises Antiques is her declaration of independence from her powerful and manipulative family—and a vow to herself that her future will be different.
She never considered herself the no-strings-affair type, but the chemistry between her and her newly hired handyman is too intense to ignore. Moving to Jamesville was a bold step, so what’s the harm in taking one more—into his arms?
Levi Mann’s shadowed past keeps his bags packed light and his feet on the move. But one look at Linda, and he finds himself willing to hang around—just long enough to figure out what it is that triggers their explosive passion.

Thank you to everyone who loves Jamesville as much as I do.

Linda Fletcher stared at the creamy vellum envelope with the dark black script printed on the front. It looked so innocent lying there on the top of her oak desk. But she knew that looks could be deceiving.

She’d hoped the move to Jamesville, Maine, would stop the letters from coming, but they’d followed her from Vermont. There was no doubt in her mind that they wouldn’t stop anytime soon.

She recognized the logo of the prominent law firm printed in the upper left-hand corner—Fletcher, Fletcher and Dyson. Her great-great-great-grandfather had founded the law firm more than a hundred years ago. The two current Fletchers involved in the firm were her father and her brother. She had no idea which of them had sent this letter and she wasn’t certain she wanted to know.

“It’s just a piece of paper,” she assured herself. She ignored the burning sensation in her gut, absently rubbing her stomach with her hand as she continued to stare at the letter.

But why, today of all days, did this have to be in her box when she stopped at the post office to pick up her mail? She hadn’t even known it was there until she’d hurried back to Past Promises and dumped the mass of mail and flyers on her desk.

Ignoring the envelope, she stared around Past Promises and felt the pain in her stomach lessen slightly. Taking a deep breath, she let it out slowly. The smell of fresh paint and lemon cleaner was faint beneath the scent of rose potpourri.

Stepping out from behind her desk, Linda wound her way through the three rooms that made up her antiques and collectibles store. She stroked her fingers over the gleaming hardwood of an oak dining table set with simple, but elegant, Wedgwood china. Assorted pieces of Minton, Spode, Royal Albert and Johnson Brothers china sat in a hutch just beyond the table.

She smiled at the whimsical display of children’s dolls, their china heads and delicate linen and lace gowns a thing of beauty. Tin toys vied for a spot on a trestle table that had seen better days, but was charming nonetheless.

A settee that would have looked at home in a lady’s parlor a hundred and fifty years ago sat in a corner, a tea service was arranged on a low table beside it, as if waiting for the lady of the house to avail herself of refreshments. A brass bed was located just behind it, dressed with snowy white linen and lace. The linens were new, but they fit the feel of the display to perfection.

There were knickknacks and kitchen utensils, old tools and small tables inlaid with beautiful mosaics. Some pieces were worth a fortune, while others could be had for less than twenty dollars. There was something for everyone. And that was exactly the kind of place she wanted Past Promises to be—friendly and accessible to everyone.

And hers. It had taken her a few years to get here, but she finally had what she wanted—a store of her own. A place of her own, not tainted by her family or their expectations.

She’d worked for several years in the antiques business, building up her reputation and knowledge. Months of planning and hard work had all culminated in this special day.

The burning started up in her stomach again as she glanced at the clock. It was half-past nine and she would open her doors for the first time at ten o’clock. She didn’t have time to waste worrying about what her family wanted with her—as if she didn’t already know.

“Stop it.” Shaking her head, she strode purposefully to the antique countertop that now held the cash register, bags, wrapping paper and everything else she needed to service the customers of Past Promises. The countertop had come out of a five-and-dime store that had gone out of business during the depression. She’d gotten it for a song at a barn sale and had spent hours stripping layers of paint from it to find the gleaming wood below.

She ran her hand over the smooth surface. She and the countertop had a lot in common. It had taken time to find its true self beneath the layers, but she’d done it—for both herself and the lovely piece of furniture.

Behind the counter, she’d strategically positioned two coffee pots with gourmet coffee beans, ground and ready. She flicked on both pots to get them started brewing. She then turned on the electric kettle before checking her supply of teas. Several covered platters were already sitting on the countertop, filled with delicious cookies and treats from Delicious Delights, the aptly named bakery just up the road.

Everything was ready for her to open the doors of Past Promises and start her new life. Everything except her.

Sighing, she gave in to the inevitable and went back to her desk. The envelope was still there, looking innocent.

Linda grabbed the two-hundred-year-old silver letter opener from her desk drawer and lifted the envelope. Fitting the silver tip in the corner, she slit the top. The tearing sound seemed unusually loud in the quiet of the store. She dropped the letter opener back on the desk and pulled out the letter.

Like the envelope, it too was made of the finest quality paper. Only the best for Fletcher, Fletcher and Dyson. Her stomach churned, the low-grade burning a reminder she needed to take some of her medication. And she’d been doing so well these past few weeks controlling her ulcer. This was why she’d moved farther away from her family. They literally made her ill.

Folding back the paper, she scanned the signature first. It was from her brother, Austin. She let out a breath she hadn’t even been aware of holding. At least it wasn’t from her father, Austin Senior.

She scanned the letter and the pain in her stomach intensified. It was the usual song and dance. When was she going to give up this foolishness of being a shopkeeper and join the family firm? She was an embarrassment to them all. And if she didn’t want to join the law firm, she could at least marry well and join her mother in her charitable pursuits.

Linda blinked back tears as she stuffed the letter back in the envelope. It was always the same. Ever since she was a child, she’d been different. She’d wanted to play softball, but was enrolled in ballet instead. She’d wanted to learn gymnastics, but was sent to ballroom dancing class. Her childhood had been a series of controlled activities and schools. All her friends had to be approved by her parents. Public school was not an option.

She’d hated every minute of it.

Everything from the clothing she’d worn to the girls she could be friends with was chosen by her parents. She’d chafed at the restrictions, but eventually they’d worn her down. Linda had responded by withdrawing, becoming a quiet, studious child, which had suited her parents just fine.

The only person who’d understood her at all had been her maternal grandmother. Antoinette Lafayette had been a force in her own right. Even Austin Senior gave way when her grandmother put her foot down and demanded something. And what she’d demanded had been Linda’s presence every summer.

Linda had lived for summers spent with her grandmother. Antoinette was the one who’d instilled her with her love of antiques. The two of them had spent days driving around the state and beyond, attending estate sales, yard sales and searching through thrift shops for buried treasure.

At her grandmother’s house she could wear jeans, run and laugh. It was a time of freedom and she’d always cried when summer ended and she was sent back home.

“Are you okay?” A low, male voice startled her out of her daydreams of the past. Linda whirled around, hand on her chest, heart pounding.

He stood just behind her. Watching. Waiting.

She had no idea how long he’d been there. It should have been impossible for a man his size to sneak up on her. At six-and-a-half feet tall, Levi Mann took up a lot of space. His body was massive, but it was all solid muscle. There wasn’t an ounce of fat on the man.

He was wearing his usual uniform of jeans and a T-shirt. The faded denim clung to his thick thighs like a second skin. The soft cotton of the shirt molded to his biceps and chest, leaving little to the imagination.

And she had imagined him. A lot.

Lying in bed late at night, Linda had wondered more than once what it would feel like to touch all that sculpted muscle. She knew what it looked like. Levi had helped her with much of the renovation work on the building, as well as the painting, often removing his shirt while he worked. She’d lost count of the number of times she’d stopped painting just to stare at him while he was working. Levi gave new meaning to the phrase abs of steel. His tanned flesh looked as though it was pulled tight over slabs of muscle.

And the man was just as potent from behind. He had wide shoulders that tapered down to his thick waist, the muscles making a perfect V. His butt was first class all the way.

“Linda?” The way he said her name gave her shivers. “Are you okay?”

Oh, God. She was standing here like a ninny, staring at him again. “I’m fine.” She shook herself and dropped the letter in the garbage. “Just thinking about things.” That was vague enough for him to drop it. In her experience, most men were just as happy to avoid lengthy, in-depth discussions with females.

Levi stared at her, his golden-brown eyes sending a shiver down her spine. He had a way of watching a person that made you think he could see all the way to your soul. Then he blinked and the moment passed. “Excited about this morning?”