Главная / Современные любовные романы / Out of the Shallows 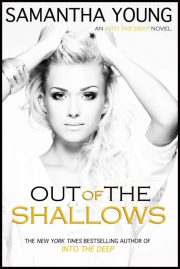 Samantha Young - Out of the Shallows краткое содержание

From the New York Times bestselling author of Into the Deep
LIVE YOUNG. LIVE HARD. LOVE DEEP.
Charley and Jake’s story concludes in Out of the Shallows…
Somehow, after everything they’ve been through, Jake Caplin and Charley Redford made their way back to one another. But finding each other and staying together are two completely different things.
When Charley’s world is flipped upside down, she begins to question the choices and decisions she’s made since her arrival in Edinburgh, and in an effort to grip onto what she holds most dear she believes she must sacrifice her love for Jake.
Returning to the States for her senior year, Charley struggles to find peace and happiness. While everyone else seems to be finding themselves in college, Charley is terrified that, along with almost everything else that’s important to her, she’s lost herself.
While friends and family deal with their own tumultuous lives, there is one person resolved to uncover the reason behind Charley’s sudden defection and unhappiness. Refusing to give up without a fight, Jake believes he is the only one who can truly understand what Charley is going through, and this time he’s determined to prove he’s there for her no matter what obstacles are thrown in their way.
However, as Charley strives to make it through the biggest personal journey of her life thus far, there is no guarantee that the woman she is becoming will still need Jake as much as the girl she once was did…

Out of the Shallows

The heady scent of flowers filled the room. These days it clung to everything. Even after I washed my hands a dozen times, they still smelled as if I’d doused them in floral perfume.

I turned from the arrangement of red roses and white lilies to find Claudia gesturing to it. I glanced back at the flowers. “I think I’m getting the hang of it. Finally.”

“It’s Hub’s. For his wife. Their fifteenth anniversary.”

Claudia nodded. “Heart of mush underneath that bear-like exterior, huh?”

I grinned. Hub owned the local diner in my small hometown of Lanton, Indiana. He was a huge guy with an even huger beard and gruff demeanor, and I could see why non-locals might find him slightly intimidating. But Claud was right. Hub was all heart. “He placed this order over a month ago. That is not a man who forgets his anniversary.”

My friend smiled and then gestured behind her into the store front of my mother’s florist shop. “I rearranged the shop window like you asked.”

Delia’s was the only florist in town, and although Lanton wasn’t huge, she kept fairly busy. She’d had a mold issue in the back room where I was working on floral arrangements, but after spending money my parents really couldn’t afford to spend to fix it, Delia’s was up and running again.

If only I could be one hundred percent positive that Delia, my actual mom, was up and running too.

“Thanks. If I don’t tell you enough, I really appreciate you being here.” Once Claudia had finished at the University of Edinburgh, she’d rushed back to the States, suitcase in tow, and moved in with my parents and me. She’d been here the whole summer, helping us out during one of the worst times of my family’s life.

“You can stop saying that now. I might have to hurt you if you don’t.”

Claudia frowned as she glanced around us. “Uh… where is Delia Mom, anyway?”

Mom was at the cemetery. It was becoming a regular hang out for her. I found myself hunching back over the arrangement as I murmured, “Where else?”

“Ah. Okay.” Claudia sighed. “So, Lowe called me this morning.”

“He says he’s tried calling you.”

Shrugging with more nonchalance than I felt, I said, “I know. I just… I haven’t spoken to Jake, so I don’t think it’s right if I speak to Lowe.”

“No, Lowe is Jake’s friend. I’ve hurt Jake enough without confiding in his friend when I won’t confide in him.”

I reached for more filler foliage. Claudia’s hand curled around mine, stopping me. “The arrangement is done.”

Turning to her, I said, “I get the feeling you want to talk.”

“Charley, school starts back up in a week. Are you ready?”

“We’re going back to the old apartment, and it’s senior year so we’ll have tons on our plates to keep us busy. You’ll get to see Alex again, too. This will be good.”

I looked away, worrying my lip between my teeth. After a moment of silence, I said softly, “Do you really think they’re okay for me to go? Mom still visits the cemetery every day and Dad… he’s still mad at me.”

Claudia’s eyes were filled with sympathy but I could also see determination in them. “Maybe Delia is still visiting the cemetery but that doesn’t mean she’s not good. She’s much better, Charley. She can cope on her own here now. And Jim… he loves you. He’ll come around when you come around.”

“Don’t,” I warned, definitely not wanting to walk into that territory.

She held her hands up in surrender. “I won’t. But are you ever planning on talking to Jake again?”

I glowered at her. “What is this? Piss-Off-Charley Day?”

“No, this is ‘It’s time to get back to normal and start facing up to the decisions you’ve made these last few months Day.’ Such as the one you made regarding a certain Jacob Caplin?”

A familiar pain sliced across my chest, but I refused to give into it. Instead I brushed past Claud to grab a broom and started on the back room floor. “Then no, I don’t plan on talking to Jake again. It’s over. We’re just going to leave it at that.”

Claudia inhaled sharply. “You’re just going to leave him hanging, wondering where it all went wrong?” She sounded horrified. Guilt crashed over me.

I shoved it forcefully aside. “We’ve hurt each other too much. How can we possibly come back from that?”

Whatever it is, I think people think I’m this fearless, brave, independent young woman who couldn’t give a shit what other people think.

I really couldn’t give a shit what other people think.

But I care what my parents think of me. And I’m afraid of losing them.

So not fearless. So not brave. And I guess not nearly as independent as I used to think I was.

When you’re a kid, your whole happiness is wrapped up in your parents. A hug from them, a kiss on the forehead, a piggyback ride, their laughter, their kind words, their affection, their love… it took away a hurt knee, or a classmate’s name-calling, or the death of a beloved pet. As long as I knew my parents loved me, that I made them proud, and that I had their respect, I’d been all right.

That feeling never really goes away, though. It’s amazing how easy it is for a parent to make you feel like a little kid all over again.

That’s how I’d been feeling around my family for months now… like a kid craving my parents’ love and respect. Lately, for the past few months, I felt like they were nothing but disappointed in me. Especially my dad.

Later that day, after Mom came back from the cemetery and helped Claudia and I finish out the day, we went home to make dinner. My dad, a mechanic, owned auto shop. He got in from work not too much later and soon we were seated around the dining table.

The clinking of cutlery off plates, glasses against cutlery, the rustle of napkins, the crunch of bread, it amplified the quiet. We didn’t have a whole lot to say to each other these days.

I was surprised when Dad asked, “You thought any more on taking that exam you need to pass to get into law school?”

I looked over at Claudia, her eyes rounded at Dad’s question. I shocked her by replying, “I’m taking the LSATs this fall, Dad.”

Claudia’s eyes bugged out. “You are?”

She had taken the LSATs in June and passed, but she was under the impression that I was done with pursuing law school.

Feeling my parents’ gazes burning into my cheeks, I nodded. “I am. As long as I take them in time for February results, I can apply to start law school next fall.”

“I’m pleased to hear it. I’m sure Claudia will help you study,” Dad said.

Our eyes met and for the first time in months, Dad’s were almost tender. He was genuinely pleased. To him I was making the right decision.

I didn’t know if it was the right decision to apply for law school instead of applying to the police academy like I wanted to. That was probably why I hadn’t mentioned anything to Claudia about my decision—I didn’t want someone talking me out of it. The truth was I’d made the decision based on what was best for my family.

“So am I.” Glancing over at Mom, I saw tears shining in her eyes as she smiled at me.

Yeah, totally the best decision for my family.

It gave them peace of mind, and they needed that more than I needed to be a cop.

Claudia bravely queried, “Are you sure that’s what you want, Charley?”

“Of course.” I gave her a tight smile.

Dinner was less awkward than usual after that. Mom and Dad actually engaged in conversation and afterward, instead of shooing me off when I attempted to help clean up, Mom let me.

I followed her into the kitchen and piled the plates near the trash. As I began scraping off the leftovers Mom said, “I’m proud of this decision, Charlotte.”

I glanced over at her. “Yeah?”

She smiled, her eyes misting. They did that a lot these days. Mom had never been a big crier before… well, before… but she welled up at the slightest thing now. “I have to admit it’s been playing in the back of my mind these last few months—you going off to the academy after graduation. Going into the police. It’s not like I haven’t always known you could take care of yourself. Even when you pushed Andie out of the way of Finnegan’s SUV, I worried for about half a second until I saw you. Your leg covered in a cast, bruises all over, and you grinned at us when we walked into that hospital room. All cocky. If that had been Andie, it would’ve shaken her up more. She was a mess after it happened. She followed you around for weeks. It drove you nuts.”

Just like that, a lump formed in my own throat and I turned away, trying to swallow past the collection of mounting tears. “I remember,” I whispered.

“I didn’t want you to be a cop. But before this summer, I felt guilty for pressuring you into not going for it. I didn’t want to spend the rest of my life waiting for a phone call in the night to tell me that my daughter had been killed just doing her job. But more than that, I didn’t want my kid to resent me for holding her back. For not supporting her.