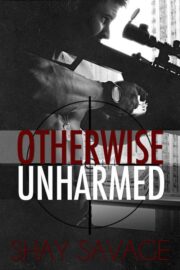 After Evan Arden was imprisoned by the enemy for a year and a half, he returned from the desert as a military hero. He’d suffered some minor injuries during his captivity, was discharged from the Marines with just a touch of shellshock, but was considered otherwise unharmed. Now he wonders how he ended up where he is now – incarcerated in Chicago’s Metropolitan Correctional Center for using his sharpshooting expertise to take out the neighborhood park with a high-powered sniper rifle and multiple rounds of ammunition.
Lia Antonio, the woman he rescued from the desert heat the previous year, is the only person who can bring him out of his sleep-deprived psychosis and mounting PTSD. When she does, Evan knows he can’t just let her go again. He’s never considered leaving the business before – who retires from the mafia? – but he’s determined to get both Lia and himself out of harm’s way.
Evan faces forces from multiple directions as a deal to get him out of jail turns more deadly and dangerous than he ever could have imagined. With a three-way mob war on the horizon and the feds holding evidence over his head, Evan has no choice but to throw himself into the middle of another war-zone.
In his efforts to make things right in his own mind, Evan crosses the wrong man and finds himself on the business end of the cross-hairs. With his observation skills and intelligence, he tries to keep a step ahead of his former co-workers, but this time, it isn’t just his own life on the line – he’s got to protect Lia from the man who once called him son.

This one is for Savage’s Street Walkers—my street team—who encouraged and harassed me to write more every day and get it all completed on time and for all those who love Evan Arden and wanted to hear more of his story.

Special thanks to everyone who helped pull this together: Chaya and Tamara for their marvelous editing, Adam, Holly and Jada for the fabulous artwork for the cover and video, and Spatcave Studios for the use of the Barrett M82. I couldn’t have gotten it done without all your help!

Even though the lights had just been turned on, I was already sitting up in the rough, uncomfortable bed that was one of many in the Metropolitan Correctional Center of Chicago’s medical unit.  It had been quiet up until a moment ago when the daytime workers arrived and the day guard took the place of the one on the night shift.  I could hear words being spoken as shifts changed, but I didn’t pay attention to their meaning.  Everything happening outside of me was too much to take.  There was enough going on inside my head at that moment.

Shots, explosions, the recoil of my Barrett M82 sniper rifle against my shoulder, and blood.

I shifted my arm, and the chain to the handcuff around my wrist rattled against the railing on the side of the bed.  The feeling made me tense a little, like it did every time I moved, and I began to feel a little dizzy and lightheaded.  I hadn’t slept more than an hour or two since I’d been brought here.

Initially, the doctor at the prison insisted on sedating me.  The forced sleep and the accompanying dreams were the worst I had ever had, and I refused all other medication after that first time.  I knew at some point my captors could get a court order to force me to take them, but as long as I was reasonably cooperative, that would take some time.  I was certainly all right with waiting as long as possible.  I had never liked taking drugs of any sort.

Maybe by then I would be able to control the memories again.  I had learned how before—even without having someone sleeping beside me or having drugs in my system.  Not long after I left Virginia and moved back to Ohio, I had managed to control the dreams.  How had I done that?

“Lots of practice,” I respond.  “It’s about the only thing that keeps me calm, you know?”

“Yeah, that’s what you’ve said.”  He crushes his cigarette into the ground before crouching down next to me.  “Do you ever think about…you know…shooting people?”

“All the fucking time,” I mutter as I pull back on the trigger and send another shot into the makeshift target at the far end of the open field behind Jonathan’s house.

“Could you?” Jonathan presses.  “Could you really shoot a person like that?”

“But you were deployed then.  What about now and with a different sort of enemy?”

I think for a moment, and the woman with the dull gray eyes that sparkled as she talked about opening up a fucking flower shop poked out from behind the other memories.

Jonathan seems to contemplate for a moment, and as I am about to fire again, he speaks up.

“I got someone who wants to meet you.”

It seemed liked a hundred years ago when Jonathan first brought me to Rinaldo Moretti’s office.  In reality, I had only been doing hits for the crime lord for a couple of years.  I wondered how many people I had killed for him and decided the exact number was best left to ambiguity.

A muscle spasm in my back caused me to pull from my thoughts long enough to move a little to the left for some relief.  I refused to think about the cold metal connecting me to the bed and preventing a lot of movement.  I tried not to let it remind me of being in a hot, reeking hole somewhere in the vast deserts of the Middle East.  I tried to tell myself it wasn’t the same at all.  If I had been turned on my front instead of on my back, or if I had been kneeling, keeping the memories from my mind would have been impossible.  As it was, the thoughts still lingered, pounded at the front of my skull, and demanded access into my brain continuously.

It was hard to fight it, and sometimes I gave in out of sheer exhaustion.

There was a part of me inside—probably the one part that still remained of whoever I may have once been—that knew I had cracked.  I was mentally shut down and physically non-responsive, but I still knew the meaning of the words “comatose” and “possibly suicidal” when I heard them spoken.  None of it mattered, but I still understood.  I was just too locked inside the continuous cascade of memories to care about what was going on anywhere outside of myself.

The door slid open with a clang, and I glanced toward the sound, but I couldn’t say that I actually saw anything going on in my vicinity.  At least, I didn’t see or hear enough to actually pay attention to it.  All my thoughts and my focus were internal.

How did I get here?

I wasn’t stupid.  I also wasn’t so far gone to not remember the basics of what happened.  After serving my tour of duty as a Marine sniper in the Middle East coupled with eighteen months as a prisoner of war, being exiled to Arizona for screwing up a hit for my mob-boss, spending too much time thinking about the girl I met there, and killing my favorite hooker for betraying me, I’d finally lost it and started shooting up the neighborhood.

It hadn’t been my very best plan, but then again, I hadn’t been in the best frame of mind.  Without Bridgett the hooker lying next to me, I couldn’t sleep.  It had already been more than a week since I had managed a decent night’s rest when I found out Bridgett had been telling my nemesis, Terry Kramer, privileged information I had babbled in my sleep.  After I killed them both, I hadn’t slept at all.

My chest seized up, and for a moment I couldn’t breathe.  I could see the terror in her eyes as I dragged her from my car to the storeroom in the basement of Moretti’s office.  I heard her pleading with me to let her go and felt her blood splatter against my shoulder as I shot her.

She had trusted me, depended on me, and in the back of my head, I knew she had feelings for me neither one of us was willing to acknowledge.  And in return, I put a bullet in her head.

There was no answer.

What brought me to that point, that moment?

The question was more metaphorical.  I hadn’t started off so bad, so how did I end up where I was today?  Raised in a convent by a bunch of nuns, emancipated at seventeen, and left to my own devices, I had joined the Marines so I could serve my country as one of the best snipers ever trained.  I was field promoted to Lieutenant in the middle of a firefight.  All in all, not the worst start in life.  But then I had lost my entire unit to insurgents, was taken prisoner, and tortured for a year and a half.

After I had been rescued, I came back with bruises, muscle atrophy to the point where I needed help walking at first, and a dislocated shoulder.  Aside from those minor injuries, I was perfectly fine when they brought me back from the Middle East via a German military hospital outside of Munich.  I remembered hearing the words on the television when my little soldier story was getting a lot of media play.

It wasn’t until after I came home that everything went wrong on the inside: kicked out of the Marines, based on a diagnosis from a doctor who mostly wanted to write a bestselling book, and eventually hooking up with a guy who led me into my current line of work—sniping for the Chicago mafia.

My caseworker was nearby, talking to the unit manager of my cellblock about when I might be moved to the general prison population.  I heard her say Mark Duncan, the name of the military shrink who was assigned to my case after my discharge.  He had apparently been calling about me and was likely going ballistic because he didn’t see any of this coming.  He took pride in his work, and he thought he had been helping me.

Maybe he had been helping; it just wasn’t enough.

Traci, my caseworker, was a chunky, blonde woman in her mid-thirties.  She leaned over to look in my face as she spoke, but her words weren’t interesting enough for me to pay attention to them.  Her hand touched my arm, and even though part of my psyche wanted to scream and flinch from the touch, I didn’t move.

I didn’t see the point.

How many hours or days had passed since I had been taken down and dragged from my apartment didn’t really register.  I didn’t think it had been all that long, but time didn’t have a lot of meaning for me.  My actions during that day replayed in my mind a lot—the look in Bridgett’s eyes as I fired my gun into her face, the desire to shoot everyone on a bus going up Michigan Avenue, and then eventually blowing the shit out of a noisy parking garage door; the terror of being shoved to the ground as the SWAT team took me into custody, begging someone to just kill me, followed by the relief I felt when I realized Odin, my Great Pyrenees, was all right; the ambivalence of seeing Lia in the hallway and knowing she was watching me as I was dragged off in handcuffs was enough to turn my brain inside out.