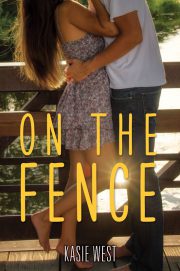 For sixteen-year-old Charlotte Reynolds, aka Charlie, being raised by a single dad and three older brothers has its perks. She can outrun, outscore, and outwit every boy she knows—including her longtime neighbor and honorary fourth brother, Braden. But when it comes to being a girl, Charlie doesn’t know the first thing about anything. So when she starts working at chichi boutique to pay off a speeding ticket, she finds herself in a strange new world of makeup, lacy skirts, and BeDazzlers. Even stranger, she’s spending time with a boy who has never seen her tear it up in a pickup game.
To cope with the stress of faking her way through this new reality, Charlie seeks late-night refuge in her backyard, talking out her problems with Braden by the fence that separates them. But their Fence Chats can’t solve Charlie’s biggest problem: she’s falling for Braden. Hard. She knows what it means to go for the win, but if spilling her secret means losing him for good, the stakes just got too high.

To Michelle Wolfson, who in the process of helping me fulfill my dreams has become a true friend

The engine whined against my attempt to go faster. The yellow lines of the road went by on my left in a blur. The ocean on my right didn’t seem affected at all. It created the illusion that I wasn’t going fast enough. The gentle curves on this road begged to be taken at high speeds. I pushed down another inch on the gas pedal and the car lurched forward. My heart picked up speed and I couldn’t keep the smile from my face. Wind whipped through the cabin, sending my hair flying and drying the sweat on my forehead from my last practice of the school year.

Red and blue lights flashed in the rearview mirror. I pointlessly lifted my foot off the gas pedal, as if that would help. I looked for a place to pull off the road, already coming up with my story. By the time the cop reached my window, pad in hand, I’d thought of two great possibilities.

When I saw his face, all my excuses were gone. I sighed and rolled down the window.

“What is this, the third time?”

“Is it?” Crap. What were the odds the same cop had to pull me over three times? “My dad says hi.”

He laughed. “Your dad is a good cop, but his name isn’t going to get you out of it this time. Not when you were going fifteen miles over the speed limit.”

“Really? It couldn’t have been fifteen.”

“It was. I need your license.”

“Can I look at your radar, make sure you read it right?”

He raised his eyebrows at me and I grudgingly handed over my license. My dad was going to kill me.

I walked in the front door and threw my bag under the entryway table, still angry about the stupid ticket. “Where is everyone?” I yelled out. I followed the sounds of laughter into the kitchen. A blender sat in the middle of the island, surrounded by a bottle of Tabasco sauce, ketchup, and eggshells. Gage looked up and caught my eye.

I could smell from the doorway whatever awful smoothie they had just created—it smelled like rotten tomatoes. “Oh no.”

“Oh yes.” Nathan snaked his arm around my shoulder and pulled me up to the counter. “Grab another glass.”

A glass was added to the others on the counter. “On three we down it,” Gage said, pouring some of the soupy concoction from the blender into five glasses.

“Why are we doing this?” I asked, looking at the four guys around the kitchen island. Three of them were my brothers—Jerom, Nathan, and Gage—and the other might as well have been—Braden. He’d been our neighbor for twelve of the sixteen years of my life and was always around.

“One, to prove we can. Two, to toughen our stomachs for the pounding they’re going to get in football tomorrow.”

“So, in other words, just to be idiots.”

“Losers have to wear it,” Braden said.

“Yeah, yeah, come on already. I want to run before dark.” I took a closer whiff. I shouldn’t have. It smelled worse than Gage’s closet.

“She’s not going to do it. Charlie’s chickening out,” Nathan said, pointing at me.

The only person I was wary of in that moment was Braden. My brothers were so easy to read. Tonight, I knew they weren’t going to drink it the minute I’d walked into the kitchen—it was written all over their faces, twisted in disgust. But Braden, even after all these years, was still the wild card. I eyed him and he smiled at me.

I shook my head and studied his eyes. They were hazel, sometimes more green and sometimes more brown. They seemed more green at that moment, and I tried to figure out what that meant about his intention. Was he going to drink it?

I closed my eyes. I did not want to wear this and have to take two showers tonight—before and after the run.

Braden cleared his throat next to me. That was a bluff move, wasn’t it? So that meant he wasn’t going to drink it.

He bumped his elbow into mine. Crap, he was trying to trick me. So that meant he was going to drink it.

Better to drink it than to wear it. I downed the glass in three big gulps, gagging only slightly.

They all held a full glass in front of them. “Ha! Wear it. All of you.” I looked at Braden, who had a smug look on his face even though technically he’d lost. I had to learn his tell so in the future I could avoid the horrid taste that coated my tongue. My stomach wasn’t very happy either. “Mmm, tastes like V8.”

I rolled my eyes. Ever since I turned sixteen—the age my father’s dating ban officially lifted—my brothers constantly spouted off qualities they thought made a guy undateable. I was convinced that if I compiled all the things they had rattled off in the last six months, there would be no one in the world left for me to date. “Why not?” I asked.

“Because you can’t trust a guy who drinks his vegetables. Plus tomato-juice breath is raunchy.”

My entire mouth slowly heated up from the Tabasco sauce. Then I got a punch of pepper that made me gag. “Ugh. What did you guys put in that?” I turned around and gave my tongue a high-pressure wash under the kitchen tap. “There is no pouring going on,” I said, spitting water everywhere. I listened as they dumped the horrible concoction on their heads to groans and complaints. Not worth the taste in my mouth. I gurgled and spit out one more mouthful of water. “Okay, that was fun. Football tomorrow. You are all going down.” I shoved Braden on my way out of the kitchen and he laughed, obviously knowing he was the only reason I ended up downing the drink.

“I’m not waiting for you to shower.” I crouched down and tightened my laces.

He slicked his hair back, the Tabasco sauce tingeing his black hair red. “Who said anything about showering? Let me grab my shoes.”

The smell lingering around Jerom as we ran made me sick to my stomach. Probably because the smell reminded me of what sat in my stomach. It didn’t help that it was a muggy summer night. Heat combined with moisture was not my favorite running condition.

I distracted myself by trying to identify the trees in the park. I knew the big ones were eucalyptus. They grew all up and down the coast. They must’ve liked the salty air. Even where we lived, ten miles from the ocean, they thrived.

“Eight weeks of summer,” Jerom said, interrupting my failed attempt to name any more trees. “Then we’ll be shackled by the oppressive chains again.”

“Don’t remind me. At least you have some freedom.”

He laughed. “Okay, yeah, it kind of does. But I still have classes and soccer, so it’s not as free as it could be.”

“Have you warned Nathan? I think he’s been looking forward to some freedom.”

“Yeah, right. If there weren’t rules to stay within the strict confines of, Nathan wouldn’t know what to do with himself.”

He glanced over at me, slightly out of breath. It was good to know I could still outrun my big brother. I wasn’t even winded. “What about you?” he asked. “Any preconceived notions about being an upperclassman I need to crush?”

“True. Maybe they did you a disservice with that. Maybe they should’ve let you suffer in the trenches for a while before calling you up.”

“Maybe I should race you up the hill.” I pointed ahead of us. The hill marked the beginning of mile three. My stomach gurgled, not agreeing with my suggestion, but as soon as Jerom said “You’re on,” I couldn’t back down.

As we powered up the hill, I noticed for the first time that it wasn’t just muggy; dark clouds hung overhead. Rain clouds. He led for the first fifty yards or so, but it was a big hill. I saved my speed for when he lost his energy, and I raced past him. At the top, I bent over, now winded, and tried to catch my breath.

“Being a forward has spoiled you,” I said. “I hear midfielders all over the world collectively laughing at you.”

“It looks like it’s going to rain,” I said, glancing at the sky again. “We better still be able to play tomorrow.”

“Oh, we’ll play. It just might turn into mud football.” He looked at his sleeve and then flicked a chunk of red goo off it.

The visual made my stomach flip, and acid crept up the back of my throat. “Hold on a minute.” I walked to the side of the road and proceeded to puke in some bushes. The smell made me want to repeat the action, but I quickly walked away.