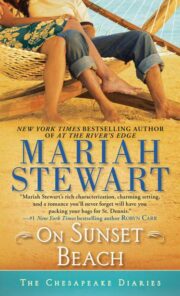 Carly Summit’s name couldn’t be more fitting, since in life she always lands on top. She grew up wealthy and privileged in a tony Connecticut town, opened her own gallery in New York City, and is about to make art world history displaying previously unknown works by a prominent twentieth-century painter. No wonder she possesses a can-do attitude that can’t be soured. Ford Sinclair is another story. A military career in war-torn Africa, where he witnessed unspeakable violence and suffering, has left him haunted and deeply cynical. Now he’s looking for a way to forget and a place to belong. He hopes to find both back home in St. Dennis.
When Carly is forced to move the premiere of her new exhibition from Manhattan to St. Dennis, and Ford agrees to take charge of the town’s only newspaper, the two cross paths. But it’s hardly the start of a beautiful friendship. While Ford can’t ignore her charms, Carly’s unflappable good cheer only confounds him. Yet beneath Ford’s stormy brooding, Carly sees a man worth caring about—even if her warmest ways can’t thaw his frozen heart. But when a scandal suddenly threatens to destroy Carly’s career, Ford finds himself fighting hard for her—and falling for her even harder.

My baby boy is on his way home! Finally! Yes, at this very moment, Ford is making his way to Virginia, where he’s to meet with someone … his explanation of this was somewhat murky but perhaps it was the poor connection that left me confused. In any event, he’s back on our soil and on his way home, and isn’t that what matters?

Certainly that matters more than the unrest that has been eating away at me since, well, since the day he left. I’ve always been able to “read” my children—though there were times, I must admit, I was unsure how to interpret that which I was picking up, times when their emotions somehow served to block the signal, so to speak. I’ve never really understood how that worked, frankly, especially when I tried so hard to see through that fog when I knew something was not right. I suppose some might say that type of prying is akin to reading one’s child’s diary, but since at those times I was unable to break through—well, no harm, no foul.

I suppose what I’m trying to say is that ever since Ford left, I’ve been unable to see through the fog. Right now the mist surrounding him is so deep I could barely breathe when I spoke to him. What I’m picking up are undefined emotions—a melancholy, a sadness, as if he’s in mourning—but no clues as to their source. And I sense a deep conflict—wanting to come home yet wanting to stay to … what? There’s a sense of unfinished business. Of course there could be a simple and logical explanation for his mixed feelings. After all, he has worked with the same group of people for several years, and I’m sure that leaving—leaving them behind, as it were—could well be the source of his conflict.

I try to convince myself this is all very benign, but then I sense something more. Something that is shrouded in darkness, something vengeful and frightening. Something I have never sensed in that boy before. When I try to decipher it, the fog turns to black smoke and drifts skyward as if it were smoke from a chimney. I have no idea what this means, but it fills me with an unholy dread.

I dreamed of a bleeding heart last night. Yes, the flower, but I know what this symbol means in that other world into which I so often glimpse. This is all I know for certain: my boy has a heartache, and that heartache is what has sent him home—and the closer he gets to St. Dennis, the farther away he seems to be.

As for the rest of it—the darkness, the fear—I have no clue.

Of course I’ve gone to my board seeking some clarity—but you know, it’s useful only if someone on the other side is listening. So far Alice—who’s always so dependable in situations like this, don’t you know—has been silent. My attempts to contact other friends who have gone before have been equally unsuccessful—but let’s face it, Alice is my ace in the hole, so to speak. If she isn’t talking … well, I can’t begin to fathom what that might mean.

And that in itself is the most disconcerting of all.

I SPENT much of today contemplating ways to kill my husband.

“Whoa! Way to kick off a new year!” Carly Summit’s eyebrows rose as she read the entry dated 1 January, 1905, in the journal she’d received in the mail that afternoon.

If James continues to deny me my artistic pursuits—as he so arrogantly professes he will do—I shall be forced to do something … well, something dire. While he voiced no such misgivings before we were married, suddenly he fears that the reputation of an up-and-coming banker (such as himself) would be tainted should his wife accept money for her work. Have I not promised to never use my married name on my work, that the RYDER name would remain pure and unsullied by my craft? Is the man really so simpleminded that he believes an ultimatum such as the one he issued at dinner would have me put down my brushes and destroy my canvases? Is his ego truly so fragile that he fears societal censure should I accept payment for my paintings? Can he really expect me to choose him over my work?

Had I suspected his narrow-mindedness before the wedding, I swear this marriage would never have happened. As it is, I shall simply ignore him.

Sometimes I think the choice is simple enough.

Carly sighed heavily and jotted the date and the sentiment in the notebook she kept by her side. As an art dealer and owner of upscale galleries in New York, Boston, and Chicago, and managing partner of several abroad, she was well familiar with stories of women who had been discouraged or even forbidden to pursue their art. But Carolina Ellis’s story was more immediate and more intimate, partly because Carly was reading the story in its entirety in the artist’s own words, partly because the artist was the great-great-grandmother of Carly’s best friend, Ellie Ryder, and partly because Carly had recently discovered a cache of previously unknown works by this remarkable early-twentieth-century artist.

Carly had spent days examining each individual painting, but it had been through studying the collection as a whole that she was able to follow the artist’s journey. Carolina’s own words had opened a window into her very soul, a window through which Carly had been able to observe the artist’s growth as she experimented with different media while seeking to gain her creative footing. Starting with pastels, Carolina moved on to charcoal (which she’d pronounced “too moody”), then to watercolor, to oils, then back to watercolor again, where, her journal proclaimed, she’d found her best, most expressive self. Using the journals and the paintings that were available to her, Carly had created an artistic time line that permitted her to trace the progression and development of Carolina’s talent and ambitions. By putting the works in order—only some of the paintings had been dated—Carly felt as if she had been able to look over the artist’s shoulder to watch as different methods, media, and techniques were tried and discarded, until Carolina’s craft had been perfected.

Had there ever been such a find?

And the coolest part, as far as Carly was concerned, was that no one else knew the paintings—or the journals—existed.

Well, no one other than herself and Ellie. Okay, add Ellie’s fiancé, Cameron O’Connor, but he wouldn’t tell anyone. And Carly’s parents—there was no way she’d be able to keep such momentous news from them, but she’d sworn them to secrecy. But no one else knew about the extraordinary find Carly had made while visiting the house Ellie inherited from her mother in St. Dennis, Maryland. There, Carolina had met and married James Ryder, raised their two children, John and Lilly, and scandalously defied her husband’s wishes by setting up an artist’s studio on the third floor of their home on the Chesapeake Bay, where she spent part of every day working at her easel.

Carly rested her elbows on the desk and continued reading.

“Amazing,” she muttered as she read on. “That this woman was able to produce such works while under this sort of domestic strain …”

She reached for the phone somewhat absently when it rang.

“Oh, Mom. Hi. Sorry. I was deep into one of Carolina’s journals that just arrived this afternoon. Ellie found a box in the attic that held a few more and she sent them to me. My head is absolutely spinning.”

“Lots of fodder for your book, I imagine.” Roberta Summit was almost as fascinated by the Carolina Ellis story as her daughter. “I can’t wait for you to finish Carolina’s biography. Remember, you did promise that I could be your beta-reader.”

“Yes, but I need you to be brutally honest.”

“Not to worry. What kind of an editor would I be if I only told you what I thought you wanted to hear?”

Carly paused momentarily. Should she tell her mother that she’d hired a professional editor for her book, one who was already hard at work on the first half of the manuscript? Perhaps not. Roberta was so pleased at the opportunity to be helpful, to contribute to her daughter’s work. Carly decided to keep that fact to herself.