Главная / Современные любовные романы / Not Over You 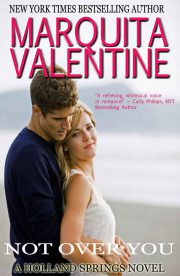 Marquita Valentine - Not Over You краткое содержание

There’s only been one woman for Gabriel Edwards—Summer Holland. But unless she needs cash, food or a place to stay, she wants nothing to do with him. Now he’s done playing Summer’s knight in shining armor. He’s finally found the woman to settle down with—the town’s newest librarian. She’s smart and sweet, and wholly in love with him. And nothing and no one will get in the way of his plans.
Until Summer comes home to Holland Springs, and needs his help once more.
Summer Holland is set on one thing: convincing Gabriel Edwards to help her get back the daughter she gave up for adoption. She’s always counted on him to rescue her when she needed it most, and this time is no different…until she learns of the new woman in Gabriel’s life.
Now she realizes she’s never gotten over him, and after they share one sweet kiss, Gabriel starts to believe that he might not be over her either…

Not Over You - читать книгу онлайн бесплатно, автор Marquita Valentine

Gabriel Edwards leaned back in his chair, outwardly smiling at his date, but on the inside…something was off with him, with them as a couple.

The server came by their table to refresh their water and pour more wine into their mostly empty glasses. The two things that everyone in Holland Springs could always count on at Jack’s Fine Italian were great service and food.

Elise Dumas raised her glass, studying him over the rim. Her green eyes sparkled, and her red hair glowed under the lights. “Everything okay?” she asked.

“Fine.” Standard southern answer to a question. But he wasn’t fine, and he hated lying about it. “Just a little tired.” At least that much was true. He was exhausted, having spent most the night before working on repairing a software glitch for the Special Victims Unit in Wilmington.

“I think you’re more than a little tired,” she said gently, and he had to look away before she could glimpse the truth. The longer he and Elise dated, the more this off feeling had grown, until it felt as though his entire body was suffused with it.

He couldn’t understand it, really. He’d been the one to ask her out, he’d been the one to pursue her, enjoy the flirting and stolen kisses…the daily texts to make plans for lunch or have coffee, just because. Not just that, Gabriel wanted to settle down. He wanted a wife, a dog, and, eventually, children—God willing.

But he did not want those things with Elise Dumas.

Gabriel blinked, the errant thought completely taking him by surprise, because there was absolutely nothing wrong with Elise. She didn’t deserve this sudden internal waffling. She deserved all of his attention, and not the sporadic amounts he’d given her lately.

Turning to her, he placed his hand on hers. It was warm and small beneath his palm. His heart raced a little. A slow smile flickered on her face, and she licked her bottom lip.

“I’m not that tired,” he said softly. “How about drinks…at my place?”

That smile of hers curved up even more. “I thought you’d never ask.” Usually, he wouldn’t have.

Gabriel didn’t exactly broadcast it to the world, but he had planned on waiting for his wedding night to have sex for the first time. Perhaps this off feeling was a result of that, of old-fashioned thinking. Growing up as the adopted son of a preacher had made him tentative in his relationships. Or maybe it was because he was still a virgin by choice.

With a wink, he said, “I think a gentleman shouldn’t keep a lady waiting for so long.” Then he motioned for the server to bring him the check.

Elise’s brows rose, but she said nothing until after the bill had been paid and Gabriel was lacing his fingers in hers. “Three months isn’t that long, Gabe.”

Try twenty-nine years, honey. He opened the door and inclined his head, letting go of her hand so she could go through first. She walked ahead of him, and he stood back to admire the sway of her hips, the way her slim skirt fit her curvy frame, and how her hair bounced on her shoulders with the movement.

A quick glance over her shoulder made him blush. He really shouldn’t be ogling Elise in the parking lot. “Sorry,” he said. Exhaling, he strode after her.

Stopping by the passenger side of his truck, Elise stood, hands clasped in front of her as she waited for him. “You didn’t have to apologize.”

He inclined his head to one side and opened the door, helping her inside. “Pretty sure I did.”

“Nah, I liked it.” She leaned into him, placing her hands on either shoulder. “It’s nice to feel wanted.”

“More than nice.” Her lashes fluttered, and he knew in that moment she would kiss him. He’d welcome that kiss, that reminder of all the reasons why he found her attractive.

But just as his own eyes grew heavy-lidded, a flash of blond hair framing a familiar face caught his attention. He jerked back. Elise almost tumbled out of the truck.

“I thought I saw…” He swallowed, unable to lie to her, yet unable to voice what his mind had registered. She couldn’t be back in town. Not now. Not when I’m so close to being over you. “Something… and it startled me.” There. At least that was the truth.

“If PDA makes you uncomfortable, Gabe, I won’t try to kiss you again,” she said. There wasn’t a trace of bitterness or sarcasm in her tone, but instead of making him feel better, he felt like a freak.

Scared to kiss her, angel? Or are you thinking of another? A voice whispered in his head, soft, seductive, and completely deadly to his determination to scrub her from his thoughts.

The scent of sea breezes and cut grass washed over him, reminding him of Summer. He inwardly grimaced. Not Summer, but summer—the season.

I’m over you. “Doesn’t make me uncomfortable,” he said, cupping the side of Elise’s face. “Now, where were we?”

But who had to think this much during a kiss? Shouldn’t a kiss be so overwhelming and consuming that the only thought you can hold onto is how to breathe?

Reluctantly, he pulled away.

Elise’s cheeks were rosy. “Wow,” she breathed. The measure of satisfaction he should feel never came. What was wrong with him?

With a heavy heart, he backed up. “Drinks are waiting.”

“If drinks at your place are anything like this, I don’t think I’ll be able to finish in one sitting.”

Gabriel had to smile over that. Her compliment flattered his ego, and then some. “Then let’s go.”

After climbing in his truck, he cranked up the engine and pulled out of the parking lot, heading north on Broad Street. Elise tuned the radio to a country station that had them both humming along. She grabbed his hand, and he felt better. In fact, that off feeling was completely gone.

“Here comes trouble,” he sang, but then that familiar face caught his eye and his stomach contracted, like he’d been suckered punched.

Summer Holland, the woman who’d sworn never to come back to Holland Springs ever again, was walking down Broad Street. She looked the same to him—beautiful, strong, and unattainable. Though that wasn’t always true. Once she’d been vulnerable and always willing to throw herself into his arms.

But then he’d let her down. All over a lie, that turned into a rumor, which spread like wildfire… and he’d done nothing to stomp it out, until it was too late, because the smallest part of him had believed it could be true. That, in truth, the apple didn’t fall far from the tree.

He’d been the worst sort of snob, the worst sort of hypocrite, to believe some guy’s lie. It didn’t matter that he had apologized. Summer had never forgiven him, and would always make him pay. Until he thought they’d finally broken through all that. Until he thought they’d finally be together. He had wanted to be the father of the child that wasn’t his. He had wanted to be Summer’s husband, her lover, and best friend. He thought she had wanted the same.

Then she’d shoved him away again. For no reason at all.

He almost slammed on the brakes, but somehow, he kept going, staring at her retreating form in the rearview mirror.

It was a damn good thing traffic was light.

Her hips swayed in barely there cutoffs, tan legs as long as anything. The blood is his veins thrummed. Involuntarily, his grip on Elise’s hand tightened.

Elise. Elise. The woman who sat so innocently beside him, singing and enjoying his company, while he salivated over another woman’s legs and hips. She deserved better than this, better than him, with his messed-up, tightly twisted history of dropping everything to help the girl who used to own his heart.

Now he knew what was wrong with him—Summer Holland.

He wanted to bang his head against the steering wheel to clear it, but instead he drove on, silently urging the already light traffic to become nonexistent. After another ten minutes of driving, he pulled into her driveway instead of his.

“Change of plans?” she asked, slipping her hand from his as he parked the truck.

“Excuse me?” he managed to ask, turning to Elise.

He searched Elise’s face. There was no judgment in her expression, just a sort of gentle understanding, which only served to make him feel even worse.

“She’s not why I changed my mind.”

Running his hand through his hair, he groaned. “Yes, no… Honestly, she’s all in my head right now, because the only time she comes around is when she needs something.”

“And you always rescue her.”

“Guess you’ve been warned about that, huh?”

“I wouldn’t call it a warning, more like a be prepared type of thing.” Elise gave him a small smile. “Zoe Romanov told me that if I wanted to be with you, then I needed to accept your need to help others, especially one person in particular.”