Главная / antique / No Longer a Gentleman 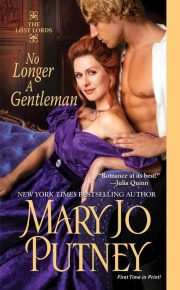 Grey Sommers, Lord Wyndham, never met a predicament he couldn’t charm his way out of. Then a tryst with a government official’s wife during a bit of casual espionage in France condemns him to a decade in a dungeon, leaving him a shadow of his former self. Yet his greatest challenge may be the enigmatic spy sent to free his body — the only woman who might heal his soul. Cassie Fox lost everything in the chaos of revolution, leaving only a determination to help destroy Napoleon’s empire through her perilous calling. «Rescuing Grey» is merely one more mission. She hadn’t counted on a man with the stark beauty of a ravaged angel, whose desperate courage and vulnerability thaw her frozen heart. But a spy and a lord are divided by an impassable gulf even if they manage to survive one last, terrifying mission…
### Review
«Rich with historical detail and multifaceted characters.» (Publishers Weekly, starred review)»
### About the Author
Mary Jo Putney graduated from Syracuse University with degrees in eighteenth-century literature and industrial design. A **New York Times** bestselling author, she has won numerous awards for her writing, including two Romance Writers of America RITA Awards, four consecutive Golden Leaf awards for Best Historical Romance, and the **Romantic Times** Career Achievement Award for Historical Romance. She was the keynote speaker at the 2000 National Romance Writers of America Conference. Ms. Putney lives in Baltimore, Maryland. Visit her Web site at www.maryjoputney.com.

“Tomorrow’s ride should be easier.”

“Every day is a new adventure,” he replied. “Tomorrow’s will be discovering if my seat is too sore to sit a saddle.”

Her laughter swiftly turned into the soft, regular breathing of sleep. He was so tired that he thought he’d sleep easily, too, but his mind stubbornly refused to slow down.

Cassie might think herself lacking in beauty, but he found her increasingly alluring. With nothing else to distract him, all he could think about was her.

He rolled onto his side facing away, but it was impossible to forget her presence. As the night wore on, he added wood to the flames in the primitive little fireplace. It barely took the chill off the air, but no matter. He was quite heated enough.

During the latter years of his captivity, passion had died and he’d felt like a eunuch. The idea had hardly bothered him when there were no women in his world except in increasingly distant memories. But now he was sharing a small space with an attractive woman whom he liked and admired, and all he could think of was how much he wanted to touch her.

Never Less Than a Lady

No Longer a Gentleman

No Longer A Gentleman

All copyrighted material within is Attributor Protected.

To the Mayhem Consultant for his patience

It isn’t always easy to live with a writer!

To the Creative Cauldron. How many stories have we knocked out of the ballpark together? A lot!

And to all the great people at Kensington, who take such good care of my books.

The door opened. Recognizing her, the butler bowed her inside. “His lordship is in his study, Miss Fox.”

“No need to show me the way.” Cassie headed to the rear of the house, thinking that it was about time Kirkland sent her back to France. For years, she had moved secretly between England and France, spying and acting as a courier at Kirkland’s direction. The work was dangerous and grimly satisfying.

Outwardly a frivolous gentleman of leisure, in private Kirkland was a master of intelligence gathering and analysis. He’d kept her in London longer than usual this time as part of a team working desperately to uncover a plot against the royal family. They had succeeded, a wedding and Christmas had been celebrated, and now Cassie was restless. Working to undermine Napoleon’s regime gave her life purpose.

She knocked at the door of the study and entered at his call. Kirkland sat behind his desk, as well tailored as always. He rose courteously as she entered.

With his dark hair, broad shoulders, and classic features, the man could never be less than handsome, but today his face was etched with strain despite his smile. “You’re looking more anonymous than usual, Cassie. How do you manage to be so forgettable?”

“Talent and practice, since anonymity is so useful for a spy,” she retorted as she chose a chair opposite him. “But you, sir, look like death in the afternoon. If you don’t take better care of yourself, you’ll be down with another attack of fever and we’ll find out if you’re indispensable or not.”

“No one is indispensable,” he said as he resumed his seat. “Rob Carmichael could do my job if necessary.”

“He could, but he wouldn’t want to. Rob much prefers being out on the streets cracking heads.” Rob had said as much to Cassie—they were close friends, and occasionally more than friends.

“And he is so very good at it,” Kirkland agreed. “But I’m not about to fall off the perch anytime soon.” He began toying with his quill pen.

“It isn’t like you to fidget,” Cassie said. “Have you found a more than usually perilous mission for me?”

His mouth quirked humorlessly. “Sending agents into France is always dangerous. My qualms increase when the mission is more personal than of vital interest to Britain.”

“Your friend Wyndham,” she said immediately. “Bury your qualms. As heir to the Earl of Costain, he’d be worth a few risks even if he weren’t your friend.”

“I should have known you’d guess.” He set the quill neatly in its stand. “How many times have you followed possible leads about Wyndham?”

“Two or three, with a singular lack of success.” And Cassie was not the only agent to look for proof that the long-vanished Wyndham was either alive or dead. Kirkland would never give up until there was evidence of one or the other.

“I haven’t wanted to admit it, but I’ve feared that he was killed when the Peace of Amiens ended and all Englishmen were interned so they couldn’t return to England.” Kirkland sighed. “Wyndham wouldn’t have gone tamely. He might well have been killed resisting arrest. He hasn’t been heard from since May 1803, when the war resumed.”

“Since he isn’t in Verdun with the rest of the detainees and no other trace of him has turned up, that’s the most likely explanation,” Cassie agreed. “But this is the first time I’ve heard you admit the possibility.”

“Wyndham was always so full of life,” Kirkland said musingly. “It didn’t seem possible that he could be killed senselessly. I know better, of course. But it felt as if saying the words out loud would make them true.”

It was a surprising admission coming from Kirkland, whose brain was legendarily sharp and objective. “Tell me about Wyndham,” she said. “Not his rank and wealth, but what he was like as a person.”

Kirkland’s expression eased. “He was a golden-haired charmer who could beguile the scales off a snake. Mischievous, but no malice in him. Lord Costain sent him to the Westerfield Academy in the hope that Lady Agnes would be able to handle Wyndham without succumbing to his charm.”

“Did it work?” Cassie asked. She had met the formidable headmistress and thought she could handle anyone.

“Reasonably well. Lady Agnes was fond of him. Everyone was. But she wouldn’t let him get away with outrageous behavior.”

“You must have a new lead or you wouldn’t be talking to me now.”

Kirkland began fidgeting with his quill again. “Remember the French spy we uncovered when investigating the plot against the royal family?”

“Paul Clement.” Cassie knew the man slightly because of her ties to the French émigré community. “Has he provided information about Wyndham?”

“Clement had heard rumors that just as the truce ended, a young English nobleman ran afoul of a government official named Claude Durand,” Kirkland replied. “I know the name, but little more. Have you heard of him?”

Cassie nodded. “He’s from a minor branch of a French noble family. When the revolution came, he turned radical and denounced his cousin, the count, and watched while the man was guillotined. As a reward, Durand acquired the family castle and a good bit of the wealth. Now he’s a high official in the Ministry of Police. He has a reputation for brutality and unswerving loyalty to Bonaparte, so he’d be a dangerous man to cross.”

“Wyndham might not have survived angering a man like that. But Clement had heard that Durand locked up the English lord in his own private dungeon. If that was Wyndham, there’s a chance he might be alive.”

Cassie didn’t need to point out that it was a slim chance. “You wish me to investigate Clement’s information?”

“Yes, but don’t take any risks.” Kirkland regarded her sternly. “I worry about you. You don’t fear death enough.”

She shrugged. “I don’t seek it. Animal instinct keeps me from doing anything foolish. It shouldn’t be hard to locate Durand’s castle and learn from the locals if he has a blond English prisoner.”

Kirkland nodded. “Dungeons aren’t designed for long-term survival, but with luck, you’ll be able to learn if Wyndham is—or was—imprisoned there.”

“Did he have the strength to survive years of captivity?” she asked. “Not just physical strength, but mental. Dungeons can drive men mad, especially if they’re kept in solitary confinement.”

“I never knew what kind of internal resources Wyndham had. Everything came so easily to him—sports, studies, friendships, admiring females. He was never challenged. He might have unexpected resilience. Or, he might have broken under the first real pressure he’d ever faced.” After a long pause, Kirkland said quietly, “I don’t think he would have endured imprisonment well. It might have been better if he was killed quickly.”

“Truth can be difficult, but better to know what happened and accept the loss than be gnawed by uncertainty forever,” Cassie pointed out. “There can’t be many English lords who offended powerful officials and were locked in private prisons. If he is or was at Castle Durand, it shouldn’t be difficult to learn his fate.”

“Hard to believe we may have an answer soon,” Kirkland mused. “If he’s actually there and alive, see what must be done to get him out.”

“I’ll leave by the end of the week.” Cassie rose, thinking of the preparations she must make. She felt compelled to add, “Even if by some miracle he’s alive and you can bring him home, he will have changed greatly after all these years.” 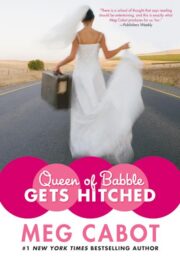 Queen of Babble Gets Hitched 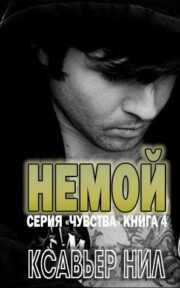