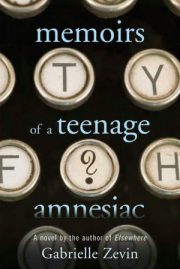 If Naomi had picked tails, she would have won the coin toss. She wouldn’t have had to go back for the yearbook camera, and she wouldn’t have hit her head on the steps. She wouldn’t have woken up in an ambulance with amnesia. She certainly would have remembered her boyfriend, Ace. She might even have remembered why she fell in love with him in the first place. She would understand why her best friend, Will, keeps calling her “Chief.” She’d know about her mom’s new family. She’d know about her dad’s fiancée. She never would have met James, the boy with the questionable past and the even fuzzier future, who tells her he once wanted to kiss her. She wouldn’t have wanted to kiss him back.
But Naomi picked heads.
After her remarkable debut, Gabrielle Zevin has crafted an imaginative second novel all about love and second chances.

Memoirs of a Teenage Amnesiac

For my editor, Janine O’Malley, on or about the occasion of her marriage

IF THINGS HAD BEEN DIFFERENT, I’D BE CALLED Nataliya or Natasha, and I’d have a Russian accent and chapped lips year round. Maybe I’d even be a street kid who’d trade you just about anything for a pair of blue jeans. But I am not Nataliya or Natasha, because at six months old I was delivered from Kratovo, Moscow Oblast, to Brooklyn, New York. I don’t remember the trip or ever having lived in Russia at all. What I know about my orphanhood is limited to what I’ve been told by my parents and then by what they were told, which was sketchy at best: a week-old baby girl was found in an empty typewriter case in the second-to-last pew of an Eastern Orthodox Church. Was the case a clue to my biological father’s profession? Did the church mean my birth mother was devout? I’ll never know, so I choose not to speculate. Besides, I hate orphan stories. They’re all the same, but most books are bursting with them anyway. You start to think everyone in the whole world must be an orphan.

I can’t remember a time when I didn’t know I was adopted. There was never a dramatic “we have something to tell you” talk. My adoption was simply another fact, like having dark hair or no siblings. I knew I was adopted even before I knew what that truly meant. Understanding adoption requires a basic understanding of sex, something I would not have until third grade when Gina Papadakis brought her grandparents’ disturbingly dog-eared copy of The Joy of Sex to school. She passed it around at lunch and while most everyone else was gagging with the realization that their parents had done that to make them (so much hair, and the people in the drawings were not one bit joyful…), I felt perfectly fine, even a little smug. I might be adopted, but at least my parents hadn’t degraded themselves like that for my sake.

You’re probably wondering why they didn’t do it the old-fashioned way. Not that it’s any of your business, but they tried for a while without getting anywhere. After about a year, Mom and Dad decided that, rather than invest about a billion dollars on fertility treatments that might not work anyway, it would be better to spend the money helping some sob story like me. This is why you are not, at the very moment, holding in your hands the inspiring true account of a Kratovan orphan called Nataliya, who, things being different, might be named Nancy or Naomi.

Truth is, I rarely think about any of this. I’m only telling you now because, in a way, I was born to be an amnesiac. I have always been required to fill in the blanks.

But I’m definitely getting ahead of myself.

When he heard about my (for lack of a better term) accident, my best friend, Will, who I’d completely forgotten at the time, wrote me a letter. (I didn’t come across it immediately because he had slipped it inside the sleeve of a mix CD.) He had inherited a battered black typewriter from his great-uncle Desmond who’d supposedly been a war correspondent, though Will was unclear which war it had been. There was a dent on the carriage return that Will theorized might be from a ricocheting bullet. In any case, Will liked composing letters on the typewriter, even when it would have been much easier to send an e-mail or call a person on the phone. Incidentally, the boy wasn’t antitechnology; he just had an appreciation for things other people had forgotten.

I should tell you that the following dispatch, while being the only record of the events leading up to my accident, does not really convey much of Will’s personality. It was completely unlike him to be so formal, stiff, boring even. You do get some sense of him from his footnotes, but half of you probably won’t bother with those anyway. I know I didn’t. At the time, I felt about footnotes nearly the same way I did about orphan stories.

The first thing you should know about me is that I remember everything, and the second thing is that I’m probably the most honest person in the world. I realize that you can’t trust anyone who says that they’re honest, and knowing this, I wouldn’t normally say something like that about myself. I’m only telling you now because it’s something I feel you should know.

In an attempt to make myself useful to you,

I have assembled a timeline of the events leading up to your accident, which you may or may not find helpful, but you will find below.

6:45 p.m. Porter and Landsman arrive at the student parking lot. Porter realizes that they have left the camera back at the office.

6:46 p.m. Discussion3 ensues regarding who should have to return to the office to retrieve the camera. Landsman suggests settling the matter with a coin toss,4 a proposition which Porter accepts. Landsman says that he will be heads, but Porter states5 that she should be heads. Landsman concedes, as oft happens. Landsman flips the coin, and Porter loses.

7:02 p.m.6 (approx.) Porter arrives at the Phoenix office where she retrieves the camera.

7:05 p.m. (approx.) Porter falls down the exterior front steps at school. Porter strikes head on bottom step, but manages to hold on to the camera.7 Porter is discovered by one James Larkin.8

As I mentioned to you, I am always available to answer any other questions as they might arise.

I remain your faithful servant,

P.S. Apologies for the “I” [i] key. Hopefully, you’ve figured out by now that the thing that resembles a trident is actually the letter “I.” There’s a defect in my typewriter such that every time capital “i” is pressed, “U” comes down with it.

Of course, I didn’t remember any of this. Not the coin toss. Not the camera. Certainly not my best friend, the veracious William Blake Landsman.

The first thing I remembered was “that cat” James Larkin, though I didn’t even know his name at the time. And I didn’t remember all of James, James proper. Just his voice, because my eyes were still closed and I guess you’d call me asleep. Or half-asleep, like when your alarm clock sounds and you manage to ignore it for a while. You hear the radio and the shower; you smell coffee and toast. You know you will wake; it’s only a question of when, and of what or who will finally push you into day.

His voice was low and steady. I’ve always associated those types of voices with honesty, but I’m sure there are loads of low-pitched liars just waiting to take advantage of easy prey like me. Even semi-conscious, I lapsed into my prejudices and decided to trust every word James said: “Sir, my name is James Larkin. Unfortunately her family is not here, but I am her boyfriend, and I am riding in this ambulance.” I didn’t hear anyone argue with him. His tone did not allow for discussion.

Someone took my hand, and I opened my eyes. It was him, though I didn’t know his face.

“Hey there,” he said softly, “welcome back.”

I did not stop to consider where I had been that required welcoming. I did not even ask myself why I was in an ambulance with a boy who said he was my boyfriend but whom I did not readily recognize.

As ridiculous as this might seem, I tried to smile, but I doubt if he even saw. My attempt didn’t last that long.

The pain came. The kind of pain for which there is no analogy; the kind of pain that allows for no other thought. The epicenter was concentrated in the area above my left eye, but it barely mattered; the waves through the rest of my head were almost worse. My brain felt too large for my skull. I felt like I needed to throw up, but I didn’t.

Without my having to tell him, James asked, “Could someone please give her some drugs?”

An EMT shone a light in my eyes. “Not until she’s seen a doctor, maybe even had a CT scan. But it’s terrific news that she’s already up. Just five more minutes, okay, Naomi?”

“Just five more minutes until what?” I asked, trying to sound patient. Until Christmas? Until my head exploded?

“Sorry. Until we’re at the hospital,” said the EMT.

At this point, the pain in my head was so strong that I wanted to weep. I probably would have, too, but it occurred to me that crying might actually make me feel worse.

“Are you positive she can’t have any drugs?” James yelled.

“Distract her. Tell her a joke or something. We’re almost there,” was the EMT’s annoying, unhelpful reply.

“I don’t think that’s gonna do it,” James retorted.

“Laughter’s the best medicine,” said the EMT. I believe this may have been his idea of a joke, but it did nothing for my headache.

“Complete and utter…” James leaned in closer to me. He smelled like smoke and laundered sheets left to dry in the sun. “…bullshit, but would you like a joke anyway?” he asked.

I nodded. I really would have preferred drugs.

“Well, I can only think of one, and it’s not that good. Certainly not analgesic good. So…okay, this man goes to a psychiatrist and says, ‘My wife’s insane. She thinks she’s a chicken.’ And the doctor goes, ‘Well, why don’t you just commit her?’ And the man says—”