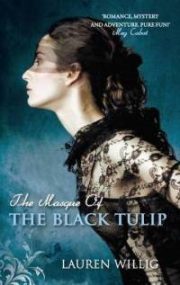 Willig picks up where she left readers breathlessly hanging with 2005’s The Secret History of the Pink Carnation. After discovering the identity of the Pink Carnation, one of England’s most successful spies during the Napoleonic wars, modern-day graduate student Eloise Kelly is hot on the trail of the Black Tulip, the Pink Carnation’s French counterpart. While researching the archives of dashing-but-grumpy Colin Selwick (a descendant of the Selwick spy family), Eloise learns that spy Purple Gentian (Richard Selwick) safely retired to the countryside; meanwhile, the Pink Carnation continues her mission with the help of Richard’s younger sister. Spirited Henrietta Selwick discovers that the Black Tulip has resurfaced after a 10-year silence with the intent of eliminating the Pink Carnation. Miles Dorrington (Richard’s best friend) works for the War Office and is directed to unearth the deadly spy. As he and Henrietta investigate, they try to deny their attraction for each other — and avoid becoming the Black Tulip’s next victims. Hero and heroine can be quite silly, and there are overlong ballroom shenanigans aplenty; like last time, Eloise and Colin’s will-they-won’t-they dance isn’t nearly as interesting as what takes place in 1803. No matter. Willig knows her audience; Regency purists may gnash their teeth in frustration, but many more will delight in this easy-to-read romp and line up for the next installment.

Masque of the Black Tulip

I bit my lip on an "Are we there yet?" If ever silence was the better part of valor, now was the time. Palpable waves of annoyance emerged from the man beside me, thick enough to constitute an extra presence in the car.

Under the guise of inspecting my fingernails, I snuck another glance sideways at my car mate. From that level, all I could see was a pair of hands tense on the steering wheel. They were tanned and calloused against the brown corduroy cuffs of his jacket, with a fine dusting of blond hairs outlined by the late afternoon sun, and the white scar of an old cut showing against the darker skin on his left hand. Large hands. Capable hands. Right now he was probably imagining them clasped around my neck.

And I don't mean in an amorous embrace.

I had not been part of Mr. Colin Selwick's weekend plans. I was the fly in his ointment, the rain on his parade. The fact that it was a very attractive parade and that I was very single at the moment was entirely beside the point.

If you're wondering what I was doing in a car bound for parts unknown with a relative stranger who would have liked nothing better than to drop me in a ditch — well, I'd like to say, so was I. But I knew exactly what I was doing. It all came down to, in a word, archives.

Admittedly, archives aren't usually a thing to set one's blood pounding,but they do when you're a fifth-year graduate student in pursuit of a dissertation, and your advisor has begun making ominous noises about conferences and job talks and the nasty things that happen to attenuated graduate students who haven't produced a pile of paper by their tenth year. From what I understand, they're quietly shuffled out of the Harvard history department by dead of night and fed to a relentless horde of academic-eating crocodiles. Or they wind up at law school. Either way, the point was clear. I had to rack up some primary sources, and I had to do it soon, before the crocodiles started getting restless.

There was a teensy little added incentive involved. The incentive had dark hair and brown eyes, and occupied an assistant professorship in the Gov department. His name was Grant.

I have, I realize, left out his most notable characteristic. He was a cheating slime. I say that entirely dispassionately. Anyone would agree that smooching a first-year grad student — during my department's Christmas party, which he attended at my invitation — is indisputable evidence of cheating slimedom.

All in all, there had never been a better time to conduct research abroad.

I didn't include the bit about Grant in my grant application. There is a certain amount of irony in that, isn't there? Grant… grant… The fact that I found that grimly amusing just goes to show the pathetic state to which I had been reduced.

But if modern manhood had let me down, at least the past boasted brighter specimens. To wit, the Scarlet Pimpernel, the Purple Gentian, and the Pink Carnation, that dashing trio of spies who kept Napoleon in a froth of rage and the feminine population of England in another sort of froth entirely.

Of course, when I presented my grant proposal to my advisor, I left out any references to evil exes and the aesthetic properties of knee breeches. Instead, I spoke seriously about the impact of England's aristocratic agents on the conduct of the war with France, their influence on parliamentary politics, and the deeper cultural implications of espionage as a gendered construct.

But my real mission had little to do with Parliament or even the Pimpernel. I was after the Pink Carnation, the one spy who had neverbeen unmasked. The Scarlet Pimpernel, immortalized by the Baroness Orczy, was known the world over as Sir Percy Blakeney, Baronet, possessor of a wide array of quizzing glasses and the most impeccably tied cravat in London. His less-known successor, the Purple Gentian, had carried on quite successfully for a number of years until he, too, had been undone by love, and blazoned before the international press as Lord Richard Selwick, dashing rake about town. The Pink Carnation remained a mystery, to the French and scholars alike.

But not to me.

I wish I could boast that I had cracked a code, or deciphered an ancient text, or tracked an incomprehensible map to a hidden cache of papers. In fact, it was pure serendipity, disguised in the form of an elderly descendant of the Purple Gentian. Mrs. Selwick-Alderly had made me free of both her home and a vast collection of family papers. She didn't even ask for my firstborn child in return, which I understand is frequently the case with fairy godmothers in these sorts of situations.

The only drawback to this felicitous arrangement was Mrs. Selwick-Alderly's nephew, current owner of Selwick Hall, and self-appointed guardian of the family heritage. His name? Mr. Colin Selwick.

To say that Colin had been less than pleased at seeing me going through his aunt's papers would have been rather like saying that Henry VIII didn't have much luck with matrimony. If decapitations were still considered a valid way of settling domestic problems, my head would have been the first on his block.

Under the influence of either my charming personality or a stern talking-to from his aunt (I suspected the latter), Colin had begun to thaw to nearly human behavior. I must say, it was an impressive process. When he wasn't snapping insults at me, he had the sort of crinkly eyed smile that made movie theatres full of women heave a collective sigh. If you liked the big, blond, sporting type. Personally, I went more for tall, dark, and intellectual myself.

Not that it was an issue. Any rapport we might have developed had rapidly disintegrated when Mrs. Selwick-Alderly suggested that Colin give me access to the family archives at Selwick Hall for the weekend. Suggested is putting it a bit mildly. Railroaded would be more to the point. The traffic gods hadn't done anything to help the situation. I had given up trying to make small talk somewhere along the A-23, where there had been an epic traffic jam involving a stalled-out car, an overturned lorry, and a tow truck that reached the scene of the crime and promptly broke down out of sympathy.

I cast another surreptitious glance in Colin's direction.

"Would you stop looking at me like you're Red Riding Hood and I'm the wolf?"

Maybe it hadn't been all that surreptitious.

"Why, Grandmother, what big archives you have?" As an attempt at humor, it lacked something, but given that it was the first time my vocal cords had had any exercise over the past two hours, I was reasonably pleased with the result.

"Do you ever think about anything else?" asked Colin. It was the sort of question that from anyone else I would have construed as an invitation to flirtation. From Colin, it just sounded exasperated.

"Not with a dissertation deadline looming."

"We," he pronounced ominously, "still have to discuss what exactly is going to go into your dissertation."

"Mmmph," I said enigmatically. He had already made his feelings on that clear, and I saw no point in giving him the opportunity to reiterate them. Less discussed, more easily ignored. It was time to change the subject. "Wine gum?"

All he actually said was, "Thanks," and held out one large hand, palm up.

In the spirit of entente, I passed over the orange and flipped a red one into his palm. Popping the despised orange into my own mouth, I sucked it meditatively, trying to think of a conversational gambit that wouldn't touch on forbidden topics.

Colin did it for me. "If you look to your left," he said, "you should be able to see the house."

I caught a brief, tantalizing glimpse of crenellated battlements looming above the trees like a lost set from a Frankenstein movie before the car swung around a curve, bringing us into full view of the house. Built of a creamy-colored stone, the house was what the papers might call "a stately pile," a square central section with the usual classical adornments, with a smaller wing sticking out on either side of the central block. It was a perfectly normal eighteenth-century gentleman's residence, and exactly what one would expect the Purple Gentian to have lived in. There were no battlements.

The car scraped to a halt in the circle of gravel that fronted the entrance. Not waiting to see if he was going to open the door for me, I grabbed the oversized tote in which I had crammed two days' worth of weekend wear, and scrambled out of the door of the car before Colin could reach it, determined to be as obliging as possible. My heels crunched on the gravel as I followed Colin to the house, the little pebbles doing nasty things to the leather of my stacked loafers. One would have expected assorted staff to be lining the halls, but instead the front hall was decidedly empty as Colin stepped aside to allow me in. The door snapped shut with a distinctly ominous clang

"You can just take me to the library and then forget all about me," Isuggested helpfully. "You won't even know I'm here."

"Were you planning to sleep in the library?" he inquired with some amusement, his eyes going to the overnight bag on my arm.