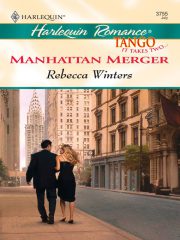 Manhattan millionaire Payne Sterling is used to being in the public eye, but his notoriety goes too far when he sees his picture on a succession of new romance novels! Payne has never posed for any portrait, so he’s determined to track down the artist who’s embarrassed him….
Beautiful, talented Rainey Bennet had seen Payne’s photo in her brother’s holiday snaps and, having no idea he was a famous entrepreneur, she thought he made perfect «hero» material! In the flesh, he’s just as gorgeous — but now he’s taking her to court! Until the powerful tycoon proposes a way for Rainey to pay him back!

All our authors are special, and we hope you continue to enjoy each month’s new selection of Harlequin Romance novels. This month we’re delighted to feature another novel with extra fizz! Bestselling author Rebecca Winters brings us a fast-paced, feel-good romance that tells both sides of the story! The heroine, Rainey, and the hero, Payne, both get their say. And the result? A gripping, emotionally insightful read!

We hope you enjoy this book by Rebecca Winters-it’s fresh, flirty and feel-good! And look out for future sparkling stories in Harlequin Romance. If you’d like to share your thoughts and comments with us, do please write to:

Rebecca Winters, an American writer and mother of four, is excited to be in this new millennium because it means another new beginning. Having said goodbye to the classroom, where she taught French and Spanish, she is now free to spend more time with the family, to travel and to write the Harlequin Romance® novels she loves so dearly.

Rebecca loves to hear from readers. If you wish to e-mail her, please visit her Web site at www.rebeccawinters-author.com.

Rebecca Winters has written over forty-five books for Harlequin Romance® and is an international bestselling author. Her wonderfully unique, sparkling stories continue to be immensely popular with readers around the world.

Thirty-three-year-old Payne Sterling glanced up from the screen of his laptop in time to see his favorite niece Catherine come flying in the study. He doubted her feet touched the ground.

His fiancée followed at a little slower pace in her wheelchair. Both women seemed panicked by something.

Catherine looked and sounded frantic as she thrust a paperback book at him.

Puzzled, he took it from her, then gave it his full attention. To his surprise he discovered it was a romance novel of all things entitled Manhattan Merger, by Bonnie Wrigley.

Below the title was a picture of a man holding a woman in his arms. They were standing in the office of a New York City skyscraper where the Manhattan skyline was revealed in the background.

Upon a second look he realized it wasn’t just any office.

Even though it wasn’t a photograph, it was like looking at himself in a mirror.

He stared at it for a full minute in stunned disbelief.

“Promise you won’t tell mother I’ve been reading these, Uncle Payne. The thing is, over the last year I’ve noticed that quite a few of the men on the covers resemble you. But this one is you,” Catherine’s voice trembled. “Even his hairline is the same shape.”

He could see that.

“She’s right, Payne!” Diane cried out anxiously. “This man has your build and dark brown hair. It’s the same length. Everything is like you, even to the exact hue of your blue eyes. That’s why I told Catherine she had to show this romance to you.”

Both of them had lost color.

“He’s even dressed in the same kind of suit and shirt I’ve noticed you wear to work before, Uncle Payne! And that view out of those same kinds of windows is exactly what you see when you walk in your office. The person who did the cover has to know a lot of private things about you.

“Look!” She pointed to some items. “See that picture of a ship passing in front of a lighthouse? You have a similar picture hanging on your office wall! And what about that little picture of a bulldog propped on the desk?”

Payne had recognized those details at once, but he hadn’t wanted to say anything for fear of alarming either of them further.

The fact that he’d hired an architect to incorporate the old lighthouse at Crag’s Head into a home where he’d been living for the past few years had set off more warning bells.

He eyed his fifteen-year-old niece whose hair was the same pale gold as his sister’s. “Have you read this yet?”

“No- As soon as I showed it to Diane, we decided to bring it straight to you!”

“You did the right thing.”

Somewhere he’d heard it said everyone had a look-alike. Possibly more than one. Maybe this was a fantastic coincidence, but he couldn’t take any chances. Not after what had happened at Christmas.

“Where do you get these books, Catherine?”

“One of the maids reads them first, then gives me a bunch. When I’m through, I return them to her.”

“Catherine really shouldn’t be reading books like this, Payne,” Diane declared. “Whoever is responsible for putting you on the covers probably read a lot of trashy romances at a young age and can no longer distinguish between fantasy and reality.”

“There’s nothing trashy about them,” Catherine defended quietly. “They’re exciting stories about people falling in love. You learn so much and go so many places. I think they’re wonderful! If you or mom would ever take the time to read one, you’d be hooked too.”

Diane’s eyes sent him a private message that indicated her strong disapproval.

“Listen, Uncle Payne-don’t be angry with Nyla. I don’t want her to get into trouble. She’s the one who said I ought to bring it to your attention!

“If you say anything to mom and dad about this, they’ll make me stay with grandma and grandpa the next time they take a trip. Nyla might even lose her job.”

He shook his head. “I’m not going to jeopardize her position here. On the contrary, I want to thank Nyla for aiding and abetting you in your latest reading frenzy. It has brought something to light that needs to be dealt with right away.”

Diane trembled. “This could be another crazed woman who’s been following you around without your knowledge. There’s no question she’s been in your office, Payne. I’m afraid for you.”

His fiancée had every reason to be terrified.

Less than six months ago Diane Wylie had taken a stalker’s bullet meant for him and was now condemned to a wheelchair-perhaps permanently.

Consumed by guilt, Payne moved around the desk and hunkered down at her side. Reaching for her hand he said, “I don’t know what to believe at the moment, but if this is another demented wacko, I’m going to find out. You two stay here. I’ll be back soon.”

He stood up, stroked his niece’s pale cheek, then grabbed the romance off the desk and strode out of his brother-in-law’s study. A few minutes later he caught up with Nyla in the kitchen enjoying afternoon tea with some of the other staff.

Her expression sobered when he showed her the romance and asked where she’d bought it.

“I get them through a book club, but you can find copies people have already read at the used book store in the village. It’s called Candle Glow Books. They have everything.”

“You’re welcome. I might as well tell you, I’ve seen your face on other covers, but your hair and eyes were always different. Until this book came in the mail, I thought it was just one of those amazing coincidences.

“I suggested Catherine say something to you about it. The likeness to you is startling! So’s the story.”

Without wasting more time he pulled out his cell phone and called security to meet him around the back of his sister’s house.

Since the age of seventeen, Payne had been the victim of half a dozen stalking incidents which had been brought to an end through police intervention.

But last December between Christmas and New Year, a psychotic woman had managed to penetrate the Sterling compound on Long Island’s South Fork. Whether she came by water or managed to get past the guard at the gate, no one knew.

At the time, the Sterlings were having dinner for the Wylies who’d invited them to their home for brunch earlier in the day. The Wylies lived on the North Shore of Long Island and had enjoyed this exchange tradition with the Sterlings for many years.

Prior to the Christmas holidays Payne had been out of the country a great deal and had spent most it working at his office where he could catch up on the paperwork in solitude.

While immersed, his mother called him upset because he’d missed the Wylies’ brunch. Could she at least count on him for dinner, and would he please bring Diane who was in the city shopping? If she could fly back with him, then no one would be late.