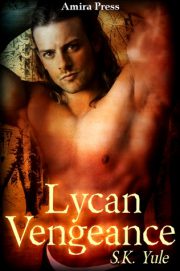 Rose has spent the past ten years hunting lycans, but when she comes across Knox, his gentle, caring nature—something she thought shape shifters incapable of—is mind blowing.
Knox has waited many lonely years for his intended mate, and now that he’s found her, he plans to make her his. Her stunning beauty, strength and passion call to him, but he wonders if he’ll be able to crack the staggering wall of hatred for his kind she’s built around her heart.
Can Rose overcome the past and learn to love the one man who represents everything she despises?
Warning: Sexy, alpha, lycan male paired with vindictive, stunning, beauty may cause intense fantasies and hot flashes.

To my husband who lets me subject him to the workings of my imagination—even under duress at times—but who is also proud of everything I accomplish.

As always, to my brilliant writing buddy, Tawanna, who allows me to bounce ideas off her, and has no qualms about giving me honest, helpful input and critique at any given moment.

And thanks to all of my wonderful readers who love reading about sexy, alpha lycans as much as I like writing about them.

Rose took aim at the lycan and pulled the bowstring back in a fluent, silent motion, waiting for the perfect moment to let it fly into the heart of the beast. She’d spent the last ten years hunting the monsters, and vowed to quit only on the day she drew her last breath. While most humans lived in oblivious bliss to the existence of the shape-shifters, she was not so lucky. The knowledge that such monsters existed would do nothing but create terror and chaos, a terror so deep it embedded itself into one’s bones, one’s essence. At this point in her life, oblivious bliss sounded like heaven.

While she’d become somewhat immune to the frightening emotions concerning the existence of such monsters, she was still susceptible to the infrequent revolt of those emotions. On the occasions they would surface—rear their ugly heads like heinous horned mythical beasts—they’d steal the air from her lungs and glare at her with an evil grin while she slowly suffocated.

Adrenaline rushed through her veins, and she took a long, indrawn breath, struggling to stave off the building tidal wave threatening to rip all logic from her brain, attempting to make her instinct of flight kick in.

The pungent odor of deer urine she inhaled nearly made her gag. The cloying scent she’d sprayed on herself to mask her presence while hunting was one she’d never grow accustomed to. A shower was always a welcomed necessity at the end of the day. Hell, she’d be willing to run through a freezing stream of hose water if need be to get the stink off her.

Thus far, the Michigan winter had been brutal, and it had only officially started two weeks ago. The snow was nearly waist deep, the already cold temperature plummeted as night came closer, and the forest was a deadly place for anyone unfamiliar with the terrain. She tensed when the lycan shifted, sniffing at the air like a dog. This particular lycan had been a pain in her ass for almost a month. If she hadn’t been a good tracker, his evasive tactics would have stopped her pursuit dead on more than one occasion. He was different from the others she’d hunted. He seemed wiser, craftier, almost precise in each and every movement he made.

Her aim had to be exact. The arrow had to go through the heart, or the lycan would shift and heal itself.

Her iron-shafted, silver-tipped arrows were specially made, as was her bow, and it had taken countless hours of shooting practice to get her accuracy to near perfection with the heavier shafts.

Taking aim at something that appeared to be human was always unnerving, but she kept the images of what this particular man could become—an abomination—burned into her brain for when her conscience whispered at her.

The memories of that fateful night—the night that had changed the path of her life forever—so long ago were seared into her brain with minute detail. She doubted that even death could release her from the horrid events, for they were etched onto her very soul and would remain a part of her for eternity.

Tammy’s smiling face flashed before her, and images she struggled hard to keep buried tore through the surface of her will, shredding it with claws that would not be denied. Rose and Tammy had been inseparable once Tammy’s family had moved into the small house next door to her childhood home when they had both been five. They’d instantly formed a bond and had spent the next several years growing up and learning about the thrills and letdowns of life together.

They’d shared sleepovers, vacations, and even a pet turtle they’d found in the backyard they’d named

Gertie. As they’d gotten older, they experienced bullies, loss, triumph, and later first love together—or what their young, naive hearts had thought to be love. They’d confided in one another their fantasies and dreams.

They had no secrets between them.

After graduation from high school, they’d spent the summer mapping out the paths they wanted to venture down in life and how they would go about achieving their goals. They had both decided to attend the local college—Tammy to study biology and Rose to study nursing. Unfortunately, those were dreams that would never come to fruition.

The week before they were to start college, they had talked about how neither of them had been interested in partying or rowdy crowds. Both preferred to stay home and watch movies, read, or just hang out—had even been dubbed “The Goody Two-Shoes Twins” by their former classmates for being known as “good” girls.

They’d wondered if they had missed out on some rite of growing up. Curious over what all the fuss was about, they’d decided to attend one of the parties on the campus of the college they would attend soon.

Unfortunately, fate did not choose to grace them with a premonition of the tragic consequences the night held for them. By the time they’d realized Tammy’s new boyfriend, Russell, had intentionally steered them to the pits of hell, it had been too late. The party—just off campus—had started out as any typical party might, underage drinking, pranks, skinny-dipping, and sex taking place, but within a matter of hours, things had changed drastically.

To make matters worse, the few sips of beer Tammy and Rose had consumed were enough to dull their senses and put them in a fog since neither had imbibed alcohol before that night. Their logic and instincts had been deadened just enough to effectively deafen the sound of the warning bells in their minds until it had been too late.

Neither of them noticed when most of the partiers had left the house or when only a few girls remained, outnumbered greatly by at least a dozen guys. By the time it had become apparent things weren’t quite right, there was no escape. Six of the men had circled them, while the remaining six circled the other two girls—girls

Tammy and Rose had never met. When Tammy asked Russell what was going on, he’d pasted a charming smile on his lying, evil lips and assured them not to worry, that it was just an initiation of sorts and that there was no reason to be scared.

When he handed them both a soda, Rose had felt a little better that he wasn’t trying to ply them with more alcohol, and after taking a few sips, the tendrils of fear that they were in deep trouble were quickly numbed by the drugs that had been slipped into their drinks. She and Tammy were ushered to the couch along with the other two girls while a meeting among the men took place.

Russell seemed to be the leader of the gang and talked about rogues and mates and the mating scent and why it was their right as lycans to use the girls. She’d thought she’d been hallucinating for most of the conversation because none of it had really made any sense.

However, when one of the men turned into a wolf, all four of them had been smacked back into reality by the cold hand of dread. She’d never forget the chilling apprehension that had slithered through her spine when she’d seen the man’s muscles contort and dark fur spring through every pore on his skin. His fangs had elongated, his eyes had glowed, and flashes of every scary movie she’d ever seen shuffled through her memory.

None of them had come close to giving her the fright she’d felt at that very moment.

Tammy and the other girls had shrieked in terror, but Rose’s vocal cords squeezed together in fear, paralyzing any sound she tried desperately to make. That one thing—her body’s natural reaction to being subjected to a living nightmare—had been what had saved her. The shrieks from the other girls excited the men, attracted their attention as effectively as a flower drew a bee. She’d sat in frozen terror until one of them touched her—the touch enough to jerk her back into reality. Her natural instincts took over once again, and she’d bitten down hard on his hand.

That had been the last thing she’d remembered, as shortly thereafter, a fist to her cheek slammed her into unconsciousness. There had been no stars, no blurring of her vision, no dimming of light. One minute she’d been aware, awake, scared, and a split second later, a switch had been flipped, and her mind had been shut off.

When she came to, she wondered if she was dead, but the pain radiating through her cheek told her otherwise—pain was what made one know they were still alive. She didn’t know how long she’d been out when she awoke to the sound of police sirens and a paramedic standing over her, positioning an oxygen mask on her face. Then the memories had crashed into her, and she’d lost control. Her fists flew out of their own accord, and her arms and legs flailed as she tried to get free so she could find Tammy, but they’d subdued her with a pair of strong hands and a quick injection of something that made her feel similar to the drugs Russell had slipped into her soda.

The next time she awoke, it was to sterile white walls and beeping machines in the hospital. Her parents had been anxiously waiting by her bedside, and eventually told her Tammy was dead. She’d insisted on seeing her best friend, even over her parents’ adamant protests. Rose squeezed her eyes shut. Damn, how she’d wished she’d listened to them. Tammy hadn’t looked anything like the beautiful girl Rose knew. Her once nearly flawless face was black and blue and swollen to nearly unrecognizable. Clumps of her shiny red hair had been ripped out, exposing bloody patches of her scalp, and her fingernails—which were almost always meticulously manicured—had been chipped and broken. Her clothes had been shredded, and claw marks marred her skin.