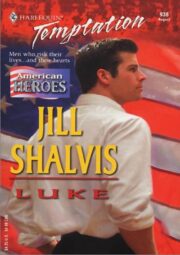 E.R. head Dr. Luke Walker saves all of his bedside manner for his patients. With the hospital staff he’s outspoken, tough, no-nonsense…until now. Disciplinary action from the hospital board has landed him a three-month stint at the Healing Waters Clinic. And working around aromatherapy, acupuncture and yoga seems to be having a remarkable effect on him. But not nearly the effect Faith McDowell-the fiery redheaded director of the clinic-is having on his libido!
The truth is Luke and Faith clash over everything-except their passion for healing people…and their passion for each other. Making love to Faith has a remarkable healing effect on Luke, putting a sexy smile on his face. Problem is, Luke Walker, who has done his best not to need anyone, finds himself needing her. So now he has to use his most persuasive bedside manner to convince Faith that this passion is for keeps.

Until one of the local doctors, a Dr. Luke Walker, had publicly raised his nose at her work there. She'd faced such disdain before, only she'd underestimated Dr. Walker's reputation and following. Once the public had heard his opinion, once they'd realized she didn't have his support, she'd ended up spending a good part of her day answering questions and debating medical practices, which in turn meant more time with each patient, creating more backlog and long waits. As a result, people weren't coming back.

Mercifully, the hospital had stepped in, promising a quick fix. They were giving the clinic an extra hand, one that belonged to Dr. Walker himself, as a matter of fact, for three months of weekends. There, she thought, with her first smile of the day. A silver lining. So therefore, her horoscope had to be wrong.

She was so sure of it, that when she ran out of hot water with conditioner still in her hair, it was a shock. Then the bathroom scale decided not to be her friend, and to top it all off, she couldn't find clean socks.

Already wary of the day and it wasn't even seven o'clock. She went downstairs. There was one negative thing about living over the clinic on a major street in a major town filled with people who got up early. The street was already filled with joggers, bicyclists, early shoppers and workers; the majority of them young, hip, urban, and far better put together than she had ever been at seven in the morning.

She located her newspaper, which hadn't made it to the stoop, but had instead landed in the small patch of wet grass. Picking it up with two fingers, the soggy, chewed mess fell apart like confetti. With a sigh, she looked up into the face of her neighbor's eighty-pound Doberman. "Again, Tootsie?"

Tootsie lifted his chin and gave her a doggie smile before trotting off.

"That's what you get for living at your work." This from Shelby Anderson, her co-naturopathic practitioner at Healing Waters, and Faith's best friend. She came up the walkway and followed Faith into the back door of the clinic, looking more like an actress in her flowered scrubs than the real thing.

Faith knew Shelby couldn't help the fact that her blond hair was always just right, and that she needed hardly any makeup to glow, or that her long, willowy body was the only one on the planet that scrubs actually looked good on, but it was still a little irksome, especially so early in the morning.

"I live above my work, not at my work," Faith corrected, tugging at her scrubs, which most definitely were not nearly as flattering on her as they were on Shelby.

"Above work, at work, same thing," Shelby said. "Both suck."

Faith looked down at her chewed newspaper. "Okay, sometimes, yes."

Shelby set down her purse and leaned against the counter, sipping at the herbal tea she'd brought. "Would you like some? You look beat already."

"Gee, and I thought I'd used my makeup concealer correctly."

Shelby smiled. "You don't wear any makeup, much less concealer, so stop it. Just remember, every time you let yourself run down, you get the flu."

Complete with exhaustion, sweaty shakes and a killer headache. She'd been plagued by a pesky tropical virus for years, more so lately, since she'd opened the clinic, but she didn't intend to let it get her again.

She'd caught the virus in Bora-Bora years ago while there as a child with her missionary parents, and ever since she'd been susceptible to it. She'd been extra careful, getting rest, eating right-not difficult since she loved food-and for the most part ate extremely healthy. If one didn't count her secret and shameful chocolate addiction.

Oh, wait, she'd given up chocolate. Really. And not because her mother had a tendency to be chunky and Faith was afraid of getting the same way, but because she wanted to practice what she preached. She wanted to live a healthy life.

Her body just didn't always agree with her. "I'm fine," she told Shelby.

"Why don't you do an herbal treatment today? Or better yet, let me do it for you?"

"Maybe." She needed to get the clinic back on track first. It shouldn't take too much. For the most part, the clinic itself was successful. People loved the services they offered. The problem was that most insurance plans didn't cover those services, so she was forced to charge far less than she should. As a result, she was understaffed, and didn't have the budget to hire more people.

The good news… Dr. Walker's services were going to be free. For three months.

"Do you really think Dr. Walker is going to help us?"

He'd better-the hospital had promised he'd be here with bells on, and a smile to boot, doing his best to give support and reverse any publicity damage he'd caused.

Faith was counting on it. Dr. Luke Walker was extremely well respected in the community. People listened to him. With any luck, he'd be far kinder to the clinic once he'd seen them in action, and he'd spread the word. "He'll show."

"Okay, but only a few minutes until patients arrive, and if he's not here…"

"I know, I know." Back-Up City, with patients grumbling, complaining, leaving… something she couldn't let happen.

Still, they waited fruitlessly for him for thirty minutes, and when they were indeed backing up, getting behind schedule, Shelby and Faith again met in the hallway with twin worried expressions.

"It is his usual day off," Faith said. "Maybe he's sleeping in by accident."

"No we're not." Nothing if not determined, she grabbed her keys. "Tell me we have his address."

"It's on your desk." Shelby smiled. "Going to haul him out of bed?"

"If need be. I know we're already so backed up, but if I get another practitioner in the house, it'll be worth me leaving for a little while." Faith chewed her lip. "Better wish me luck."


Faith stood outside Dr. Luke Walker's house on the coast and knocked again. When no one answered, she checked the address against the piece of paper she held. It had to be right. The house was a block-and-glass palace fit for a prestigious doctor, as was the forest-green Jaguar in the driveway.

She glanced at her late-eighties Ford Escort and sighed. She wasn't a confrontational person by nature despite her innate stubbornness and her fondness for being right. Truth was, in a fight she figured she'd roll over like a puppy and show her belly. But with her clinic's destiny at stake, she felt like a protective momma bear.

Make that a mountain lioness, and her claws were out.

The curse of the redheaded temperament, she supposed, and self-consciously patted her long, red-and unruly-hair. Well, tough. He'd asked for her temper by being late. He had a duty, this Saturday and every Saturday for the next three months, to her and the clinic.

She knocked again, louder now. Waited with what she thought was admirable patience. And started tapping her foot when no one answered. She glanced back at the car that assured her someone was indeed home.

And knocked yet again, listening with some satisfaction to the echo of her pounding as it reverberated through the house.

Sleeping, was he? Damn the man, snoozing blissfully while her life went down the tubes-

Then the door whipped open, and suddenly she was staring right at a man's bare chest. Tilting her head up, and up, she found her Dr. Luke Walker, and swallowed hard.

She'd heard about him, of course, in the occasional article in the newspaper, especially once he'd made his infamous comments about her clinic. But Dr. Luke Walker in the flesh was like nothing she'd ever experienced. He was leaner, harder than she'd expected, the lines of his face more stark, his nearly naked body far tougher than she would have imagined.

"Yes?" His vivid blue eyes had landed right on her, and for some odd reason she couldn't find her tongue much less form a sentence.

His dark, slightly wavy hair was short and bed-ruffled, his mouth grim. At her silence, a muscle in his cheek ticked.

Oh, and he wore nothing but low-slung sweatpants that he hadn't bothered to tie.

Bad attitude personified, all one hundred eighty pounds of him.

Clearly, she'd indeed gotten him out of bed, and yet there was nothing even halfway sleepy about his searing gaze as it swept over her. "Who are you and why are you trying to knock my door down?"

"Faith McDowell," she said, trying really hard not to notice all his corded muscles and sinews, all his smooth, tanned skin. For some reason the sight of him, up close and personal and practically naked, made her feel a little insecure.

"Well, Faith McDowell, what do you want?"

"I…" What did she want? Oh, yes, her clinic, her life. Her lioness claws came back out. "I came to drive you to the clinic, because clearly, your car isn't working, which would explain why you didn't show up at the clinic an hour ago when you were supposed to."

He just looked at her.

She tried valiantly not to look at her watch or rush him along. "We have patients scheduled for you, remember?" Tell me you remember.

"I remember." He said this in a voice that assured her going to the clinic was the last thing he wanted to do, right after, say, having a fingernail slowly pulled out. "I just wish I didn't."

"So… your alarm neglected to go off?" This time she didn't hold herself back and purposely glanced at her watch. And then nearly panicked at the time.

"Right, because as a doctor, you can breeze into the clinic more than an hour after it's opened, with no concern for how that would throw off our schedule." How could she have forgotten the arrogant God complex of doctors? "Look, I'm sorry you don't want to do this, but we have a full load of patients today. Thanks to your tardiness, we're already far behind. The longer I stand here waiting for you, the worse it's going to get."